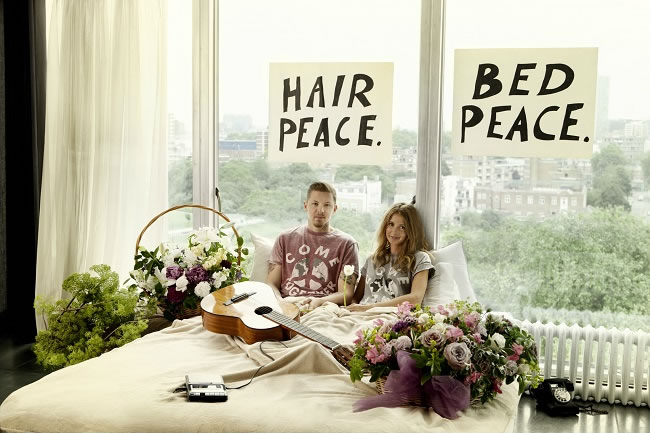 One of the UK’s most publicised celebrity couples, Millie Mackintosh and Professor Green, today recreated an iconic image of John Lennon and Yoko Ono to showcase the launch of River Island’s new 'Come Together' charity t-shirt, in support of international charity War Child.

The husband and wife mirror the legendary pair's famous statement in the classic 'Bed-In' image of John and Yoko in the presidential suite at the Amsterdam Hilton Hotel, which was used an opportunity to promote world peace and speak out against the Vietnam War.

Millie and Professor Green’s photograph reflects on-going issues still existing today, with profits from the Come Together t-shirt donated to War Child to support its work protecting the world’s most vulnerable children from the brutal effects of war. It is an exact replica of the t-shirt which featured the "Come Together" design, originally worn by John Lennon at Cannes Film Festival in 1971.

Millie Mackintosh commented: “It’s an honour to be involved in this campaign. The original image is one that is moving to us all, and the work that War Child does is something that we can all be inspired by. On top of that, the t-shirt is gorgeous, so I hope everyone will get behind this and wear theirs with pride!”

Ben Knowles, Director of Fundraising at War Child commented: “The photograph of John and Yoko and the morals that the couple stood for are representative of the values that we continue to have today at War Child. This t-shirt continues to spread a message of peace – we hope Brits will flock to the stores to buy it so we can continue our vital work protecting innocent children caught in the middle of wars they didn’t start.”

Professor Green commented: “It’s great to be involved in recreating such an iconic shot with Millie. The t-shirt is in aid of a fantastic cause and carries a strong message that hopefully everyone will get behind!”

Available at selected River Island stores and available online at riverisland.com, profits from the sale of each t-shirt will be donated directly to the cause. The Come Together logo and the rights to use John Lennon’s and Yoko Ono's likeness for the tee shirt reproduced for this project have been donated under license by Worn Free, a California based t-shirt company that specialises in re-creating clothing that famous music legends once wore.

Worn Free bought the original screen and rights to the 1969 design from Arnie Goodman and Rob Rose who created it the late sixties as a statement of peace. They sold shirts in Los Angeles and San Francisco to the local hippy community and their musician buddies, one of whom gave a shirt to John Lennon. The River Island design team has then delivered a contemporary tee from a cult classic.