OUR HIGHLIGHTS FOR JANUARY 2015'S PITTI TRADESHOW IN FLORENCE 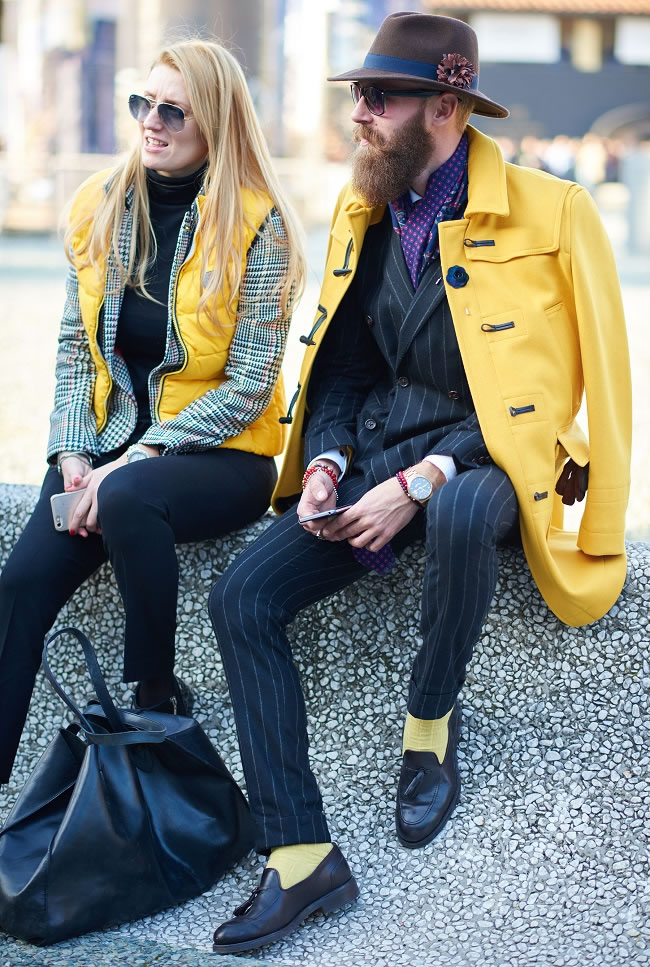 Back in full swing, we made our way to the Italian city of Florence for Pitti Uomo 87. With overwhelmingly elegant and classy dressed men amongst stands and the tradeshow grounds, it’s no surprise it’s the biggest Men’s fashion fair in the world.

Despite 3 days to spend at the famous Fortezza da Basso it was impossible to make your way around the entire exhibition without getting distracted on the way. We met with Antony Morato, Chapman Bags, Universal Works, Alan Paine and Lardini.

Italian made brand, last season was very impressive and this season was even better for Morato. In an exclusive booth with private bar the showroom was draped in classiness yet casual and understated too. A mixture of materials in leather, denim and wool in three different ranges each is aimed for the modern, cosmopolitan and international man.

Cumbrian born brand make a range of rucksacks, weekend and satchels for the modern man (a ladies); leather, canvas and waterproof. The latest range is influenced by that of italian fashion in a navy materials with deep brown thick vegetable leather and bold silver zip fastenings which contrast with the dark exterior. 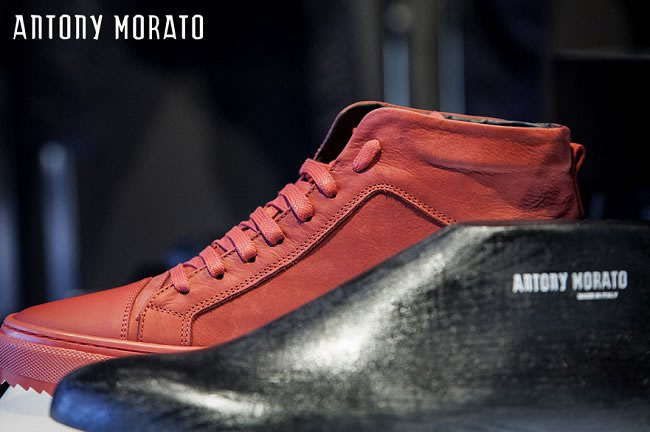 In contrast to the Italian tailoring seen on a high number of the stands we were taken to the hills of Scotland and shown around the latest range at Alan Paine. Heavily influenced by the explorer Alan himself the garments in the ‘Explorer Range’ are built for outdoor sustainability; thick oxford shirts and cashmere and merino wool for warmth which can also be washed and tumble dried.

For the second season Lardini have collaborated with Nick Wooster. Having spoken with Nick and witnessing his style over the years the range is very eclectic which as most of us are aware the majority of Nick’s wardrobe is not traditional in style! Often we see Nick in a mixture of patterns, colours and textures so with Lardini we saw patchwork jackets, shirts and pants were all full frontal in the range with asymmetrical fur collared coats. 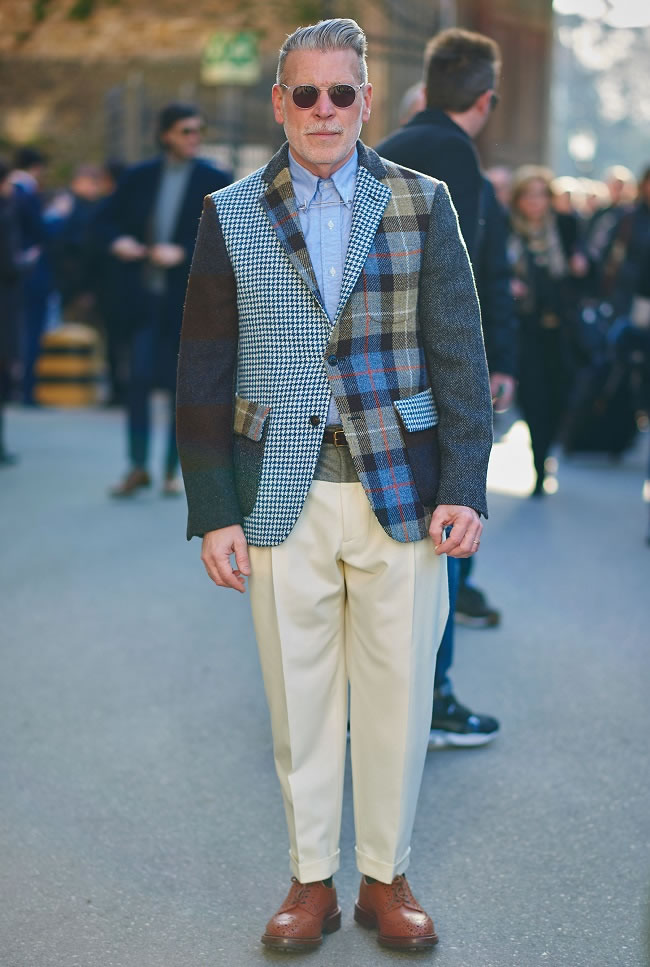 A slightly more modest brand from the heart of the East Midlands mixes British heritage through fabrics with a modern twist in style. So, this season we saw tweed and wool in a range of military jackets, over coats and cigarette pants. Colours were deep navy blue, cream, greys and browns. With added contemporary accessories of fedora and bobble hats.

Overcoats - A variety of coats were seen this season, during winter it’s important to invest in a decent over coat as it’s something you will be wearing a lot of and it says a lot about your style. We witnessed a mixtures of bespoke made coats in different colours, patterns and fabrics.

Gloves - If the men weren’t wearing them we saw them poking through a jacket pocket. In perfect colours to complement their overcoat or suit.

Hats - Fedoras, flat caps or beanies… we saw them all in each and every colour imaginable. Each season a hat at Pitti is an ultimate accessory but it’s almost like a tradition for entry that you need to be wearing headgear. 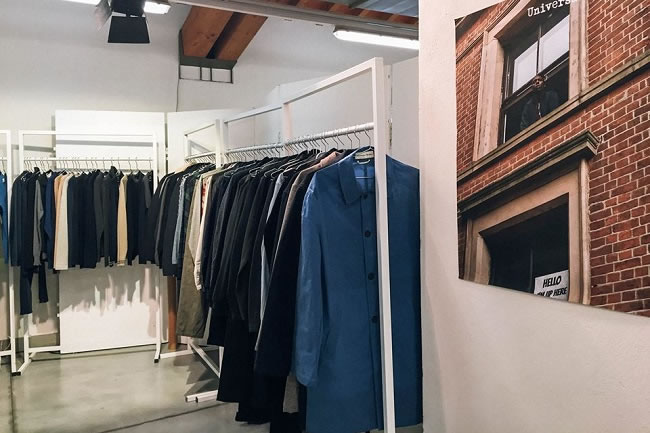 Cigars - You aren’t seen as part of the ‘Pitti Pack’ unless you have a cigar in hand at Gilli bar or outside for a morning smoke.

Printed Scarfs - With it being January, it does only mean it won’t be warm so a way to brighten up those neutral earthy tones is with a printed scarf. It’s also not unusual at Pitti to see splashes of colour for added Sprezzatura!

Checks - Gentlemen weren’t afraid of pairing a checked coat over a checked suit. Combining contrasting patterns don’t go unnoticed at Pitti without clashing or being too overstated. 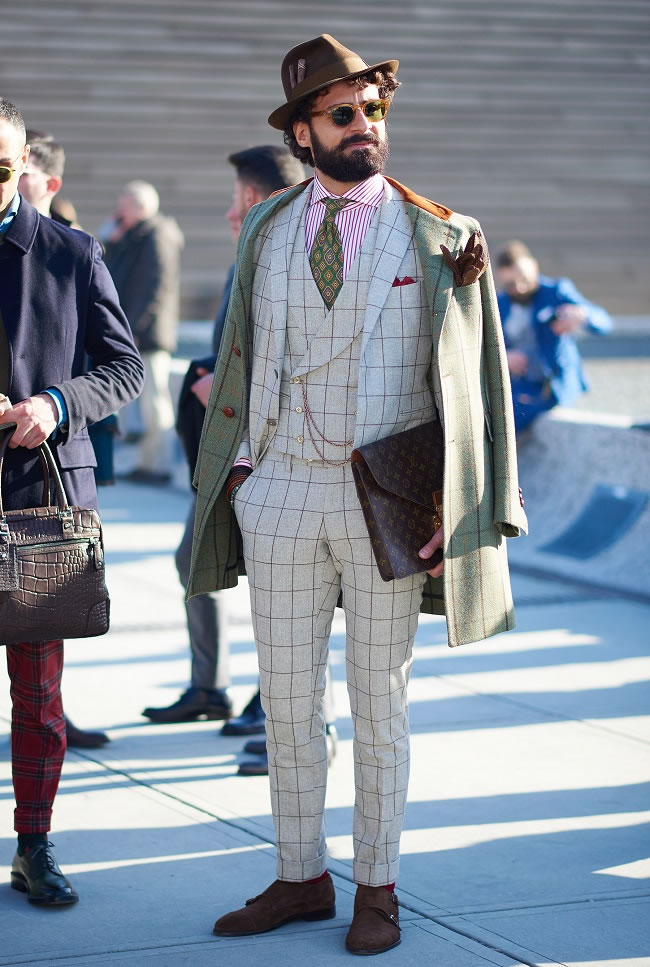