LAUNCHED BY CANTERBURY FROM 12,500 FT. WITH THE NATION’S MOST COMMITTED FANS 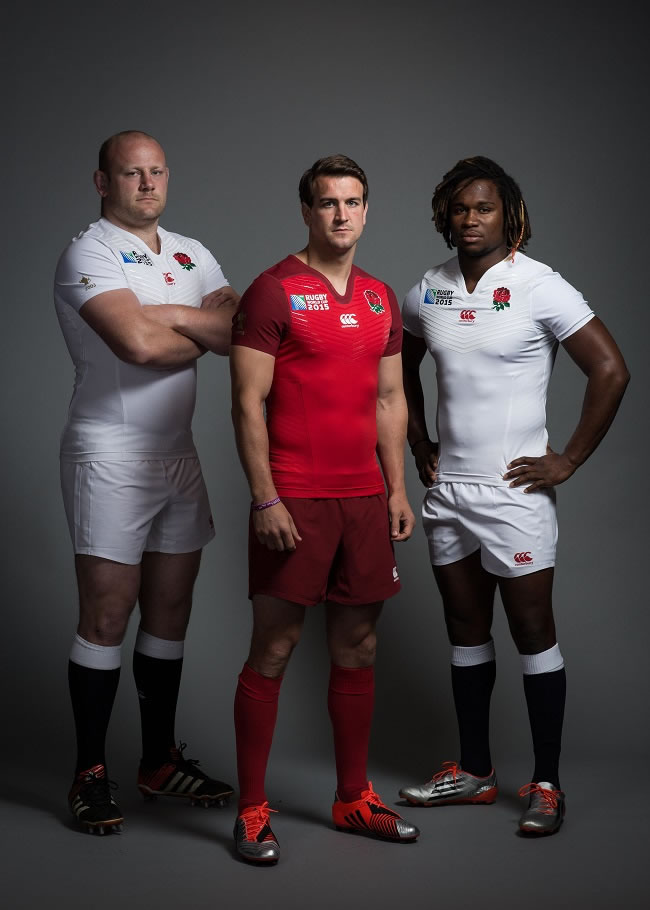 It's not very often you hear so many men talk passionately about a flower, but when it comes to the English rose it's a totally different ball game. MWS were very kindly invited to the launch of the new England Rugby World Cup kit. It was a very impressive event and one we felt extremely privileged to be a part of. With the World Cup being 74 days away, excitement is brewing rapidly. The kit chosen for the squad is an integral part of the World Cup and Canterbury, along with the England players, have put over 250,000 miles of travel and over 2 years of thought into the technology and design of the gear. The look, the feel and the performance of the kit have been the key aspects Canterbury have had to take into consideration.

The one part of the kit that quite literally stands out is the rose. The iconic emblem has been 3D injection moulded, developed through 'rapid prototyping technology' in order to make it stand out in the way that it does. Canterbury wanted to achieve "clarity, definition and distinction" with this new design. There has been a huge emphasis on the importance of the rose on the shirts as it is supposed to represent the relationship between the fans and the players, so much so that Canterbury aimed for the focus to be on the fans launching the shirt and less so the players. Fans were invited to come and meet Stuart Lancaster’s men, throw a ball around on the Twickenham pitch and some were even taken to Stonehenge to jump out of a plane with a giant banner of the shirt. It was clear on the day just how important the fans are to the England Rugby team and how they genuinely need their support to take them to the goal of lifting the glorious Webb Ellis trophy. I had the pleasure of sitting down with 6 of the England squad; Dan Cole, Lee Dickson, Mako Vunipola, Joe Marler, Marland Yarde and Jamie George. They all discussed various topics covering the fast-approaching World Cup, their training, how they deal with stress and of course the importance of wearing the England shirt.

Sitting down with these players, it was immediately very clear that they are all extremely pleased with the new kit, the shirt in particular. The shirt is the lightest Canterbury has ever produced, as Jamie George explained, “The shirt is so light, you really don’t feel like you are wearing anything. There is a huge amount of technology that has gone into it, it does make a difference compared to the old days. As it is tailored down you might not be able to grab onto too much, which is obviously good for us. I think it makes a difference, and seeing how the shirt has emerged and developed over the last 10 years, it has come on a huge amount.” With a 4 way stretch and adaptive polymer in the fabric, it means the shirt should not move against the motions of the body and therefore eliminates jersey movement which in turn keeps the body dry and comfortable. To make sure the tailoring of the shirt was as close to their individual shape, most of the team were placed in 3D scanners which filtered their dimensions, with precision accuracy. This was Joe Marler's first response to the shirt; "The shirt is lovely. It feels nice and soft, very flexible. A bit tight in some areas. Some areas good and some not so good for the fatties in the front row. That is probably more on us to lose weight than an issue with the shirt!" As it was their first day wearing the new home (white) and away (red) shirts it was apparent the amount of pride each player felt wearing the England strip. I asked Dan Cole which 3 words he would use to describe the feeling of wearing the new shirt which he strongly replied with, "Exciting, nervous and stylish". A pretty perfect description. 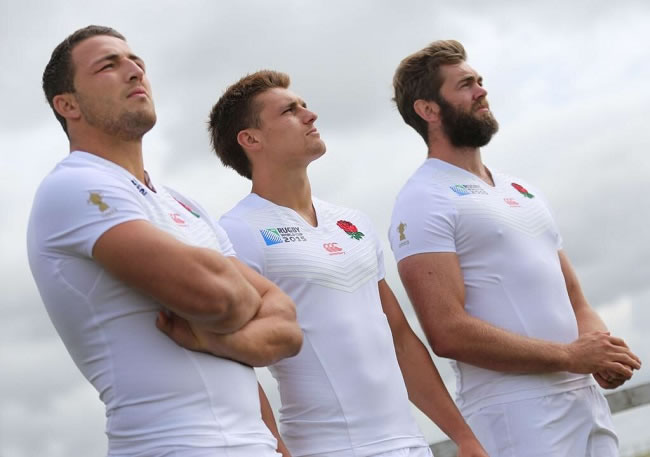 The topic of the 3D rose came up time and again in the interview with these inspiring sportsmen. It was obvious to latecomer Lee Dickson that the rose has a lot of emotion attached to it, "I love the rose. It means a lot to the team. We have put a lot of focus over the last few years over what the rose means to the team. For me it obviously represents my family and a strong bond between the team. The power of the rose brings us all together." The same question was offered to Marland Yarde, "It is an iconic badge. We are in a massively privileged position being able to play for England. So there is a lot of pride. A lot of family and friends have supported us a long the way, which means a huge amount. It has always been a dream of mine so I am living in my own fairytale world at the moment. Long may it continue." 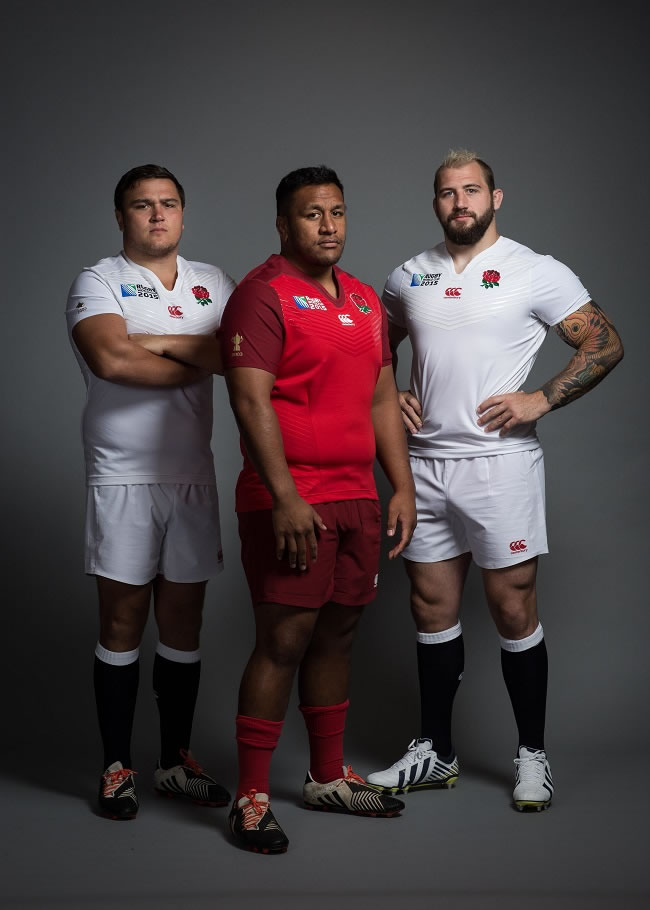 There is huge amount of pressure on these players to achieve a goal they are all individually striving for, as well as the whole nation behind them. With their intense training having already started at Pennyhill Park, and soon to continue in Denver, stress levels are already on the rise. I was interested to find out how they deal with this. Mako Vunipola was asked if they, as a team, had discussed the pressure of the home World Cup to which he replied, "Yeah we had our first meeting in camp and talked about what the World Cup means to the country how we want to get everyone behind us, like we did for the Olympics. We aren't just representing ourselves, we are also representing our families and the people in the stands cheering us on." I also asked the giant of a man what he likes to do to de-stress, "I like to sleep a lot, especially after training. We get to have a nap here and there in between meals. I have to try and take my mind off things so I can chill with the boys and we play a bit of Fifa or pool." Joe Marler takes a slightly different approach in that he apparently loves to get the mower out on his lawn at home! He also loves to get his green fingers dirty by planting a few plants and growing a lettuce or two... 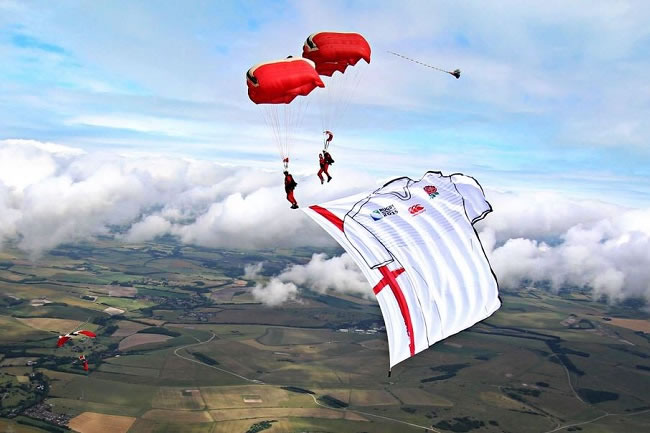 With so much focus on the World Cup, I wanted to ask a few lighter questions to see how fashion conscious the boys are, even though they spend most of their professional days in sports gear. From chatting to the players it is clear some are more into their fashion than others. According to Jamie George, Owen Farrell is one of the most fashion conscious members of the team, "Owen likes to dress well, there is a lot of thought that goes into what he is wearing. A lot of All Saints gear involved! I think Owen will try and act like he just ‘wakes up like this’, he will hate the fact I told you this! He has a good eye for fashion." Joe Marler also had his say, "Probably someone like Danny Care. He always has some fancy 'garms'…fresh garms…or Robbo (Chris Robshaw), but I think someone dresses him so I won’t credit him with any of that." At the other end of the spectrum I quizzed Joe on the recent quote, by Alex Corbisiero, that James Haskell is known for being the worst dressed... to which he responded, "Was it me who quoted that? Can I be that guy who says that right now?!" Obviously that fact still stands then! It really was an absolute honour to be sat next to these players, and one I certainly will not forget. They have a huge journey ahead of them but I am sure, along with their determination, the power of the rose will see them through to the finish line.

All players were appearing alongside their England team mates at the launch of their innovative England Rugby World Cup Shirt #CommittedtotheRose. Visit Canterbury.com