BEN MORGAN AND JOE LAUNCHBURY ON THE NEW COLLECTION, THE HISTORY OF THE SPORT (AND SOME GENERAL RUGBY CHAT) 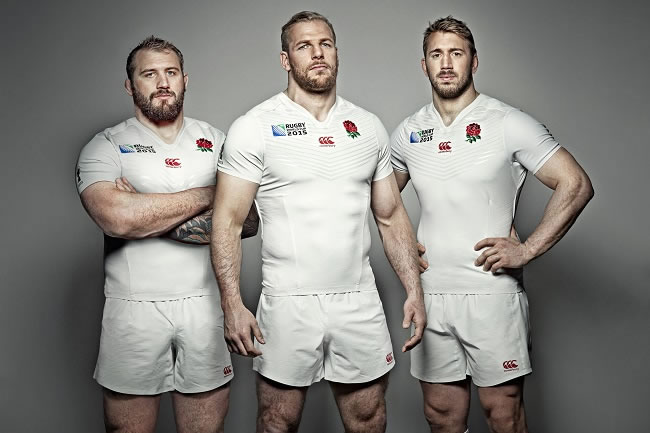 The story goes that back in 1823 a young Lancashire lad by the name of William Webb Ellis decided he would "mix things up", at his school in Rugby, by picking up a football and simply running with it. As this was not the done thing…a new sport was born. From then on it has ingrained itself in British culture and therefore it is something we, as a nation, should be extremely proud of. With so much history attached to the sport, it is understandable why there is so much pressure on the approaching home World Cup. Canterbury have decided to celebrate the heritage of the sport in their new 1871 collection. The casual collection comprises of classic long and short-sleeved rugby shirts and hoodies for the Autumn/Winter season. Each piece features an oversized red rose to emphasise the importance of the famous emblem and the history behind the kit.

I was invited by Canterbury to head down to the beautiful training grounds of Pennyhill Park to have a chat with a couple more of the England squad, Ben Morgan and Joe Launchbury, who have featured in the new 1871 campaign. Walking into the room I have to confess I reverted back to my 15 year old self at boarding school, feeling like a nervous wreck in the presence of the 6th form 1st XV rugby players, who at the time were literally considered heroes! However sitting down with these English gentlemen I was instantly calmed by their charm, determination and passion for the sport. I had a chat with Ben and Joe about their thoughts on the collection, the history of the sport and just some general rugby chat. 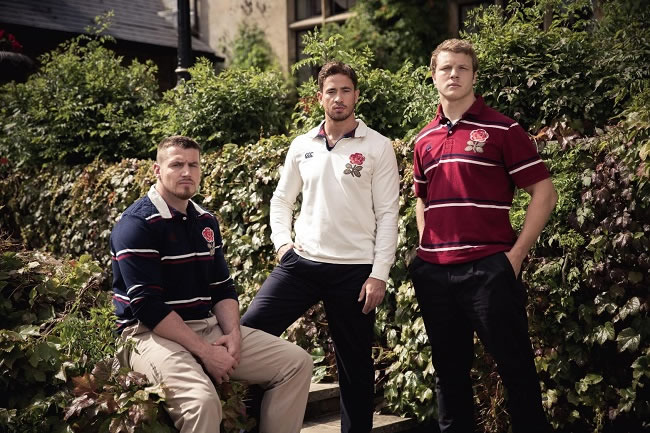 Today you guys are modeling the new classic collection for Canterbury. What are your thoughts on it?

JL: "It is really nicely put together stuff. Very comfortable and really classic. We really like it."

Obviously there is a huge amount of history attached to the sport. Was it historical matches that inspired you to get into rugby? Did you grow up with it from a young age?

BM: "Definitely as a youngster I watched a lot of rugby and was desperate to play for the country. It was always currently who was in the England squad at the time that I would be watching."

Did you go to England matches when you were younger?

JL: "That was probably when I really got the buzz of rugby, when I first went to Twickenham. As a young boy, we didn't go too often, maybe once a year, it was always special to go to an international at Twickenham. That was when I realised what an amazing chance it would be to play on the pitch myself one day."

When it comes to training with the squad, do you ever look back at old training methods for inspiration?

BM: "Training wise things have developed quite substantially from where it used to be. It has a lot to do with technology now for example for all of our sessions we have to wear GPS vests and heart rate monitors which weren't around back in the day. We are able to monitor how far we are going, accurately read how much of the training is having an effect, so we can therefore tailor sessions differently and accordingly to what we need to get out of it. Things have improved dramatically and training is a lot sharper."

JL: "Although we might not compare it to how our training is now, Stuart Lancaster has made a big point of connecting back with our past and the guys who have worn the shirt before us. Although things might have advanced over the years we still look back at the big rose and a shirt like that, we look at the players in our changing rooms and we have names of players who have gone before us. That little connection back with history is quite an important part of our team." 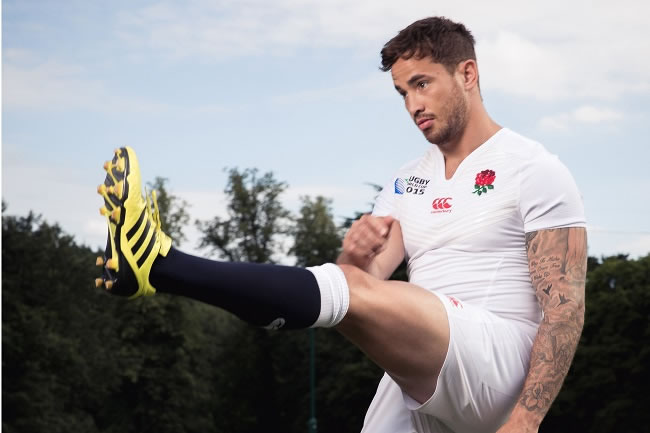 You've not long been back from Denver. How is it being back and how was the Canterbury kit in the heat?

BM: "It is great being back down here. We are really lucky with the facilities we have. The kit all worked really well out there. It was incredibly hot, and there was not a lot you could do about that, but that's one of the reasons we chose Denver, to get that adaptation for certain benefits."

JL: "It is hard to please 50 people but this set of Canterbury kit has definitely been the best fitting kit we have had for a long time."

With the standard of rugby being notoriously so high in the southern hemisphere, how are you guys dealing with the pressure of the recent Australia vs New Zealand match? (Australia beat NZ 27-19)

BM: "The pressure?! What pressure?! There's no pressure at the moment!" (Obviously joking!)

JL: "I watched the game. I was obviously impressed. I wasn't really surprised to be honest. Its been coming for quite a long time for the Australian side. To get such a big win has definitely put them on the map moving forward. I guess for us where we are now, we aren't worrying about anything we aren't in control of. We are just focusing on training hard here."

BM: "Its not surprising really. A lot of teams are coming into good form leading up to this World Cup. As already mentioned; Australia beating New Zealand, Argentina beating South Africa, so everyone is playing good rugby and making them hard teams to beat. Like Joe said, there is no point in worrying about anyone else other than ourselves. We are here in our own environment. We are in control of what we are in control of and that’s developing ourselves as a team and getting stronger and tighter as a unit." 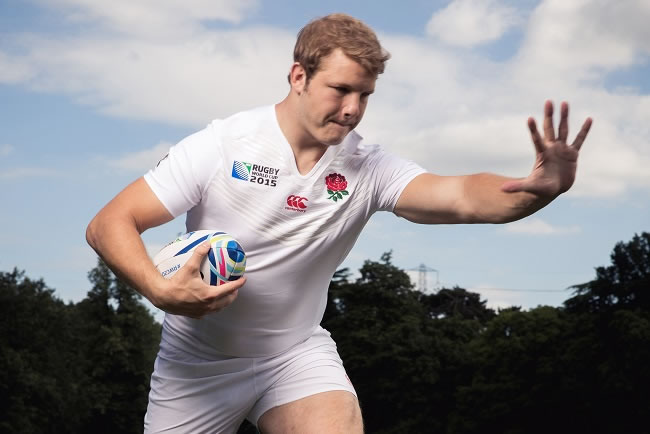 Is that going to be one of the main focuses over the next few weeks?

BM: "Definitely. This sort of training camp brings you closer together as a team. Everyone is out there working hard. Really putting themselves into a dark place but doing it together and by doing that it only strengthens the bond between us."

Do you hang out together outside the camp?

JL: "We all live all over the country but there is definitely that huge mutual respect among each other now. When you see the work we have put in together, it is understandable. When the time does come that we will go back to our clubs during the season, you will see that respect throughout the year when you are playing club matches against each other. So we do keep in touch throughout the year."

On your days off do you tend to chill out in sportswear or would you rather steer clear of it?!

BM: "It is bit of a mixed bag for me, in between training I tend to wear casual clothes. Training stuff is pretty natural for us to wear, especially around here at Pennyhill, we just chill in training gear. I tend to keep it simple and wear casual jeans or shorts."

JL: "Rugby players seem to all be quite similar to be honest! Off the pitch there are a few guys who stand out and tend to get a bit of stick for it...but on the whole we tend to be a similar breed. Outside rugby my usual style tends to be just a pair of jeans and t-shirt."

Ben, how are you feeling after your injury? Do you feel you have to train doubly as hard to compensate for it?

BM: "I've been under a different training programme, it has been frustrating at times not being able to get fully involved with all the lads and go through what they've done. However I am getting stronger through the programme week by week. Obviously I have the same aim as everyone else involved in this World Cup squad. Just working as hard as I possibly can." 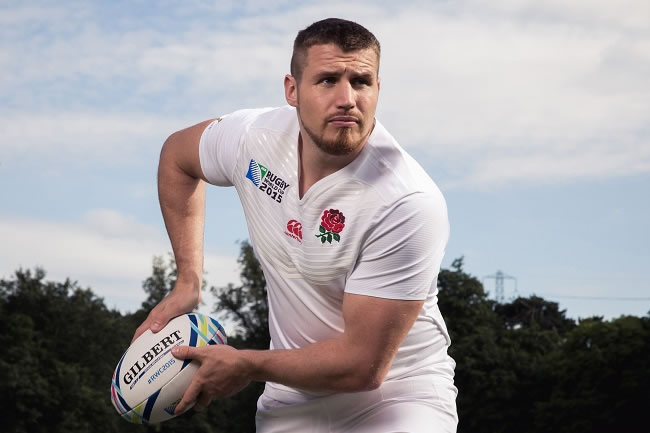 As each of you are fighting for the final squad selection, do you feel like there is a lot of competition between you guys?

JL: "There is a lot of competition. We haven't seen any signs of over stepping the mark. It is a professional sport whether it be here, back at the club, or if you are playing for a Sunday League side, so there is competition and everyone wants to play. We have that here but the balance and respect, like I spoke about earlier, is evident throughout. Although it has been the end of the road for some guys in the short term, there are still opportunities for them to come back in for injuries which will inevitably arise."

Do you guys talk about previous experiences to help you prepare for the task ahead, say from the previous World Cup?

BM: "There are only a handful who were involved in the previous World Cup. This group of players have been together for about 3 years. We are young players who have gone on a journey. We are using our experiences from along the last three years. We've all been in some huge games but you take experience from each one of those and that is what we are using as a group, like I said before, it helps us get tight and learn and develop. We are all excited about what's to come in the next couple of months."

Whether it be a legendary player, a spectacular try, a disappointing loss or a victorious win, I think every rugby fan has a poignant moment in history of the sport that is embedded in their memory. These memories and the heritage are what makes the sport what it is today. From talking to these players, wearing the traditional English Canterbury shirts, it is clear just how much representing the country means to them. They are obviously determined to write a new page in the history books and be the ones to bring the Webb Ellis Cup back home, where it belongs!

Joe Launchbury and Ben Morgan were speaking alongside their England team mates at the launch of Canterbury’s new 1871 collection, a premium lifestyle range that combines tradition and style in tribute to English rugby heritage, available now at Canterbury.com