A GUIDE TO MEN’S TROUSER SUSPENDERS

A PRACTICAL FOCAL POINT OF A MAN’S TAILORED OUTFIT 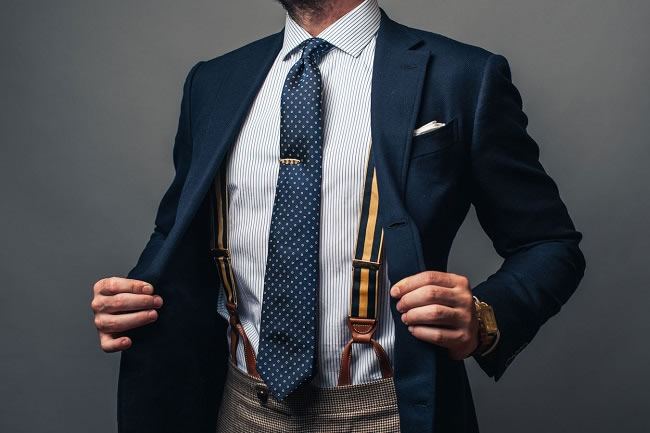 No, we’re not talking about ladies lingerie here lads, we’re talking about a man’s accessory which are also known as trouser braces. Trousers suspenders were originally invented to keep men’s trousers from falling down back in the 1800s. Trousers were always worn high up which made them almost impossible to wear with a belt. Furthermore and in my opinion, wearing a belt with a suit is a tailoring faux-pas, so it’s time to drop that matching belt and shoe rule.

In this article I’ll be covering the features of formal braces which is the only kind you should be choosing to wear. The suspender denim look is a little teenager don’t you think? This sartorial accessory has come a long way from the simple functional strips of ribbon that they started as. With a recent rise in the fascination of 20th century dressing they have become a focal point of a man’s tailored outfit, whereas in the 1800s they were considered underwear as ‘sartorial indecency’ and men would have to cover them with their waistcoats. Here’s why we think you should consider wearing suspenders over the conventional belt. 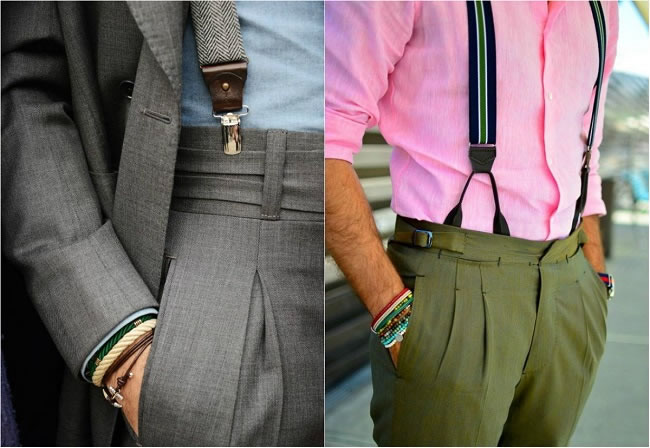 Clip On Vs Button braces

Trousers suspenders execute an ‘old school’ aesthetic, they keep tailored outfits clean and tidy. Belts instantly cut us horizontally so if you’re short than the average male they don’t work in your favour at all. Secondly, unlike the belt suspenders don’t add bulk. When wearing a three-piece suit, adding a belt distracts from the sleekness of the tailoring. If you’re the kind who may fluctuate in weight, instead of having to get the waist tailored, the trousers can still sit clean by adding buttons for the use of suspenders. 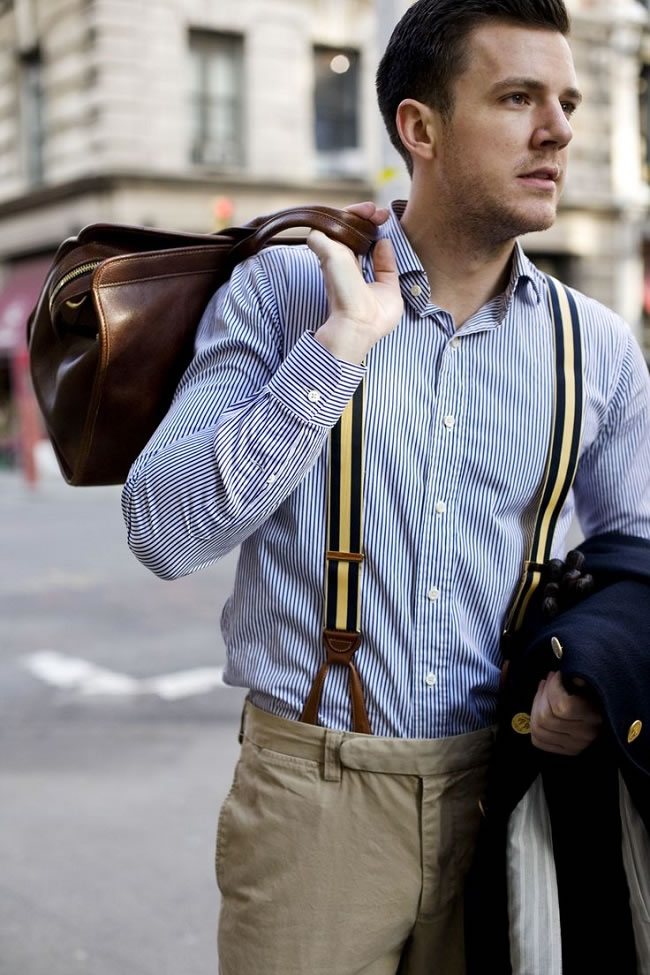 In the 90s there was a trend to wear braces hanging which really defeats the object of wearing them entirely. It was actually considered ‘cool’ to wear trousers as low as possible. Now that we’re over that phase we can adopt the more classic styles into our daily attire. With the younger generations showing a keen interest in a quintessential mode of dressing, trousers suspenders today have a modern twist. 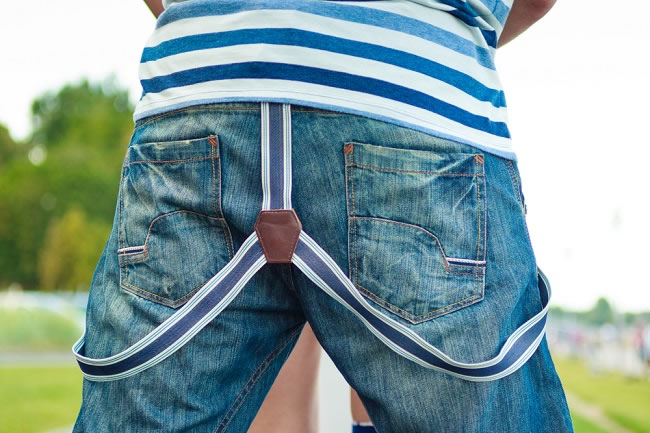 "In the 90s there was a trend to wear braces hanging"

When shopping for some consider a few essentials first - always opt for buttons, there is nothing more juvenile than a pair of clip on braces. Consider the trousers you’ll be wearing them with too, you’ll want to buy trousers without belt loops. Some of you may now be thinking where you can find trousers without belt loops other than going bespoke - you’ll generally need to be purchasing suits from tailoring houses rather than standalone fashion stores. They’ll either attach inside or outside of your trousers - if you’re after a more formal look, place the buttons on the inside of the waistband. 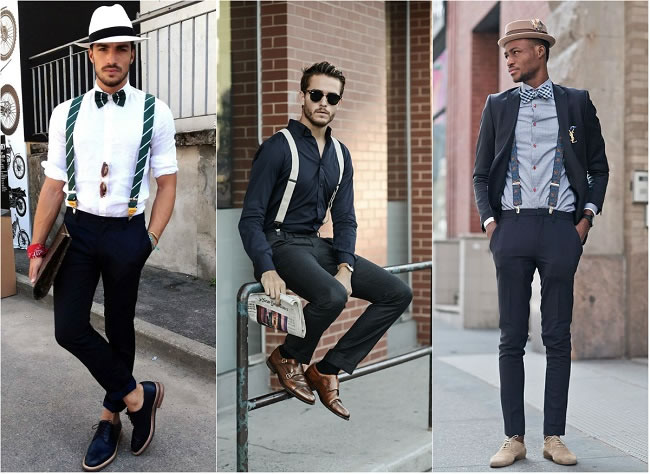 Let’s now talk about where they’re meant to sit in relation to your body. You’ll want them to be adjustable but they should sit naturally at the waist, so this may mean buying trousers with a little more room. For comfort and function reasons leave a little extra space at the hips so they lie as they should whether stood, sat or stationary - it’s imperative to remember that wearing braces with overly slim trousers will look out of place. 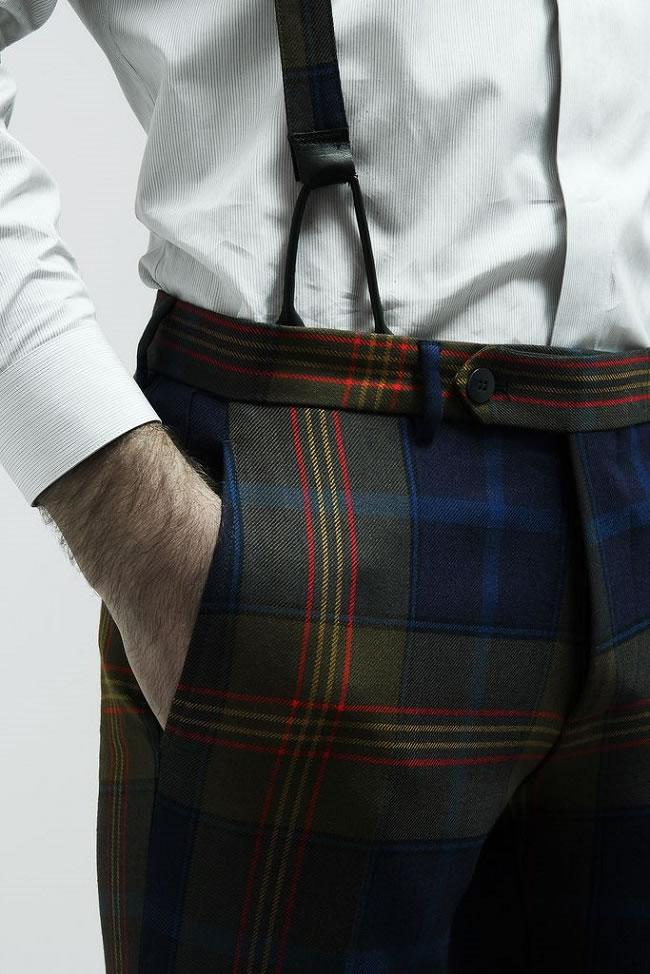 Generally speaking, formal braces are made from silk with leather fastenings, or alternatively the same material as your suit of choice but this isn’t a rule of thumb as per-say, nor do they have to be the same colour - just choose a tone which will be complimentary to your suit.