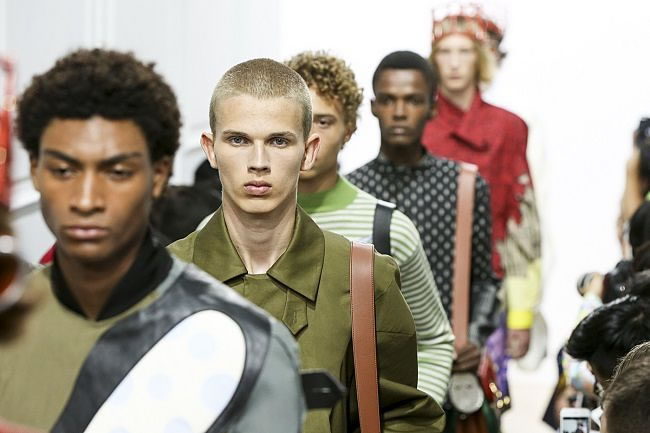 This month saw London’s menswear fashion week showcase spring/summer 2017 collections to press and buyers from around the world. LCM is now quickly becoming the benchmark for a dedicated men’s fashion week, envied by the likes of New York and Milan. In fact, the men’s clothing market grew by 4.1% in 2015 to reach £14.1billion. This is compared to 3.7% growth in womenswear – menswear now accounts for 25% of the total clothing market. Here’s our take on the runway shows and presentations over the 4 days.

Chester Barrie’s Spring Summer 2017 collection is designed to make sure men look great when it matters most. Whether it’s a wedding, a garden party or even Royal Ascot, there is something to ensure that guys will look their best. Highlights include tailoring in lightweight summer cloths including wool, silk, and linen blends which feature in a sophisticated colour palette of ecru, mid blues and warm greys.

A strong visual indication of the direction in which the Jermyn Street shirtmaker is headed, the presentation - inspired by an Annie Leibovitz shoot for Vogue in 2012 - saw models sat on suspended wooden chairs wrapped in traditional Bengal Stripe fabric, wearing the finest business shirting and accessories. Shirts were styled with crisp cotton boxer shorts, eyewear from E.B Meyrowitz and shoes from G.J.Cleverley.

This British duo looked to the reversal of traditional gender roles and also attempted to identify the role of the modern man for SS17. It was a show predominantly focused on soft and relaxed tailoring with boxy cropped jackets worn with light-weight, streamlined cotton trousers. Although modern in styling there were plenty of traditional patterns of gingham, window-pane and pinstripe. This was a real well styled collection with pieces, including neutral woolen knits, cleverly layered to create a contemporary and elegant feel. 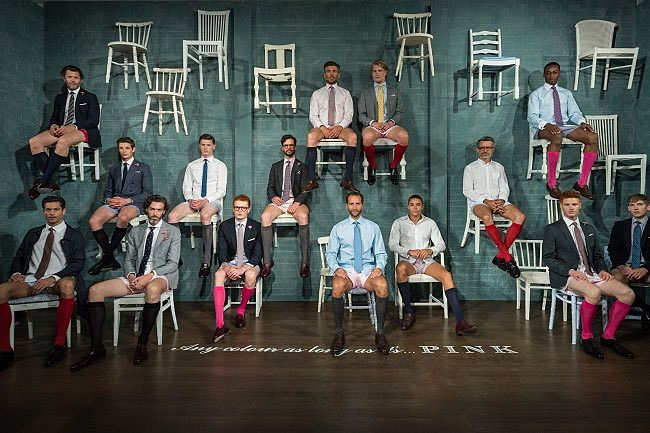 The season Wan Hung presents his new collection with a live digital presentation for the first time during LCM. Staying true to the over-arching reference points and handwriting that make up his brand DNA, this is combined with influences from the world of art including David Hockney and photographer Tim MacPherson. Prints are developed from Wan Hung’s own acrylic paintings of Hainan’s beaches and are applied alongside tailoring developments utilising 3D cutting, including innovative mens tailored draping to create wave effects through garments.

Sibling certainly know how to put a smile of people's faces during fashion week and they didn't fail for SS17! With Mariah Carey blaring and models scantily clad, it put everyone in a great mood. It may have been raining outside but it was summer inside with a show full of candy striped shirts, pyjama suits and classic Sibling knits; supposedly inspired by beach furniture. Sibling maintained their sports essence with knitted speedo briefs worn with over-sized cardigans, together with bright red board shorts and hand-knitted Sibling towels. Taking inspiration from the vibrant scenes of Miami, this is definitely a season for the body confident! 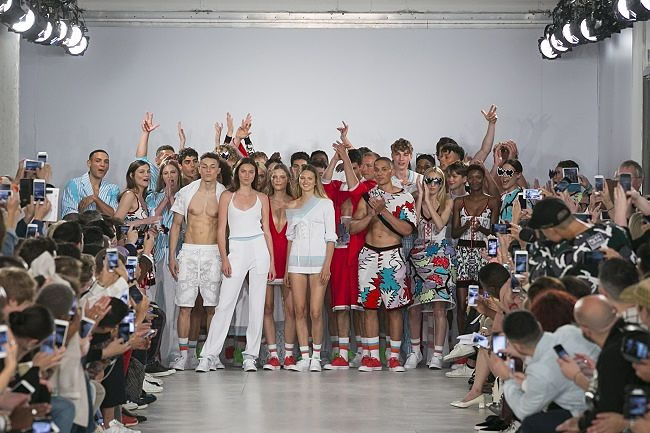 Belstaff’s Spring/Summer 17 Men’s collection is inspired by Bruce Brown’s seminal 1971 motorcycle film, On Any Sunday, starring Steve McQueen. Like the film, the collection celebrates the carefree attitude of the guys and girls from on and off the bike tracks. Referencing the sun-bleached palette of the film, key design references and colours are also taken from Belstaff archive pieces of the same era. Reinforcing and innovating true Belstaff outerwear and leather icons, the Trialmaster, Roadmaster, and café racer are all reinterpreted here.

In celebration of the brand’s 40th anniversary, Boy London created its unbranded premium line collection ‘Boy by Boy’ to offer the current customer a more elevated streetwear product. This year is also the 40th anniversary of punk so there was no better time to launch a brand that would really pay homage to both legacies.

This Yorkshire born designer chose the luxurious and avant grade ME hotel in central London to show his SS17 presentation which totally suited his heavily embroidered silk focused collection. Edward took inspiration from his home town for next summer with earthy tones of beige and nude mixed in with purple and copper. Technically advanced 3D garment software enabled this relatively new designer to digitally sew Yorkshire fable creatures onto oversized crepe robes. The printed latex socks might not exactly be part of your everyday attire but there is definitely something wearable hidden amongst his clothing, particularly the Japanese inspired t-shirts and loose-fitted, summer-weight hooded coats. 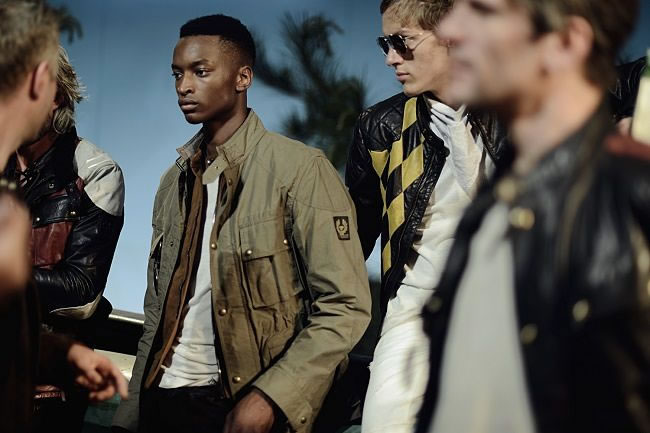 For spring/summer '17 Turnbull & Asser returns to 1970s Monte Carlo, inspired by the antics and heroism of Grand Prix victors of the day. The collection is an ode to the more audacious side of the motor racing world; referencing the Grand Prix's lovable rogues and daredevil drivers who often turned up to races in a Rolls Royce corniche laden down with attractive women and enough champagne to sink a battleship.

This collection snaps the brim of its toquilla straw hat down sharply and speeds across the shimmering, sun-slapped cyan sweep of the Straits of Florida to hedonistic 1950s Havana in the company of the enchanting, exquisitely attired British gentleman adventurer and contrebandier, Michael Dandy Kim Caborn-Waterfield - so-called for his copious collection of stunningly cut Savile Row suits. 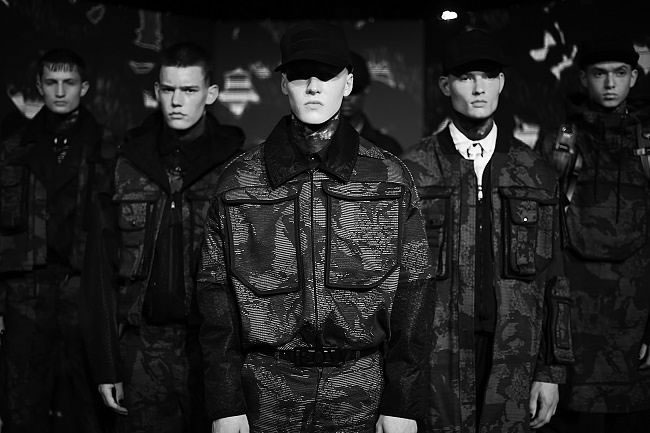 For Spring/Summer 2017 the Mackintosh design team has looked to its rich past as well as the future. The use of new performance fabrics gives a contemporary luxe feel to this collection, while a colour palette of muted pastels and subtle prints bring a dose of modernity. Print plays an important role for Spring/Summer 2017. Traditional patterns such as checks and paisley hark back to Mackintosh’s history as a British heritage brand.

Head Designer Andreas Gran took us to Sweden's new royal palace, Kungliga Slotted, for his show. This was portrayed through the first section with Rococo inspired, ornately printed suiting. With some perfectly matched surrounding classical music accompanying the models, the show then switched up tempo and a more understated modern street-style was revealed. Striped nylon jackets were worn with loose-fitted shorts with bright white socks and sneakers. The show concluded in a more monochromatic theme with layered tailoring including a personal favourite; a pink zipped field jacket, featuring a Third Culture Kids logo, worn over the top of a classic suit. A very well curated collection and a personal highlight of the week.

As an entirely wearable collection from Raeburn, this is bound to fly out of stores when it hits next year. Talking of flying, Raeburn took to space for SS17 and as always sustainability was at the forefront of his mind. Parachute material was abundant, along with unusual but functional materials such as Nomex and Tyvek. The colour palette remained soft and fresh in hues of teal and grey aside from the pop of mandarin red at the start, in the form of velcro strapped parkas. There were some great classic sweatshirts featured mid-way through featuring lunar graphics, velcro patches and the words that reflect Rayburn's ethos: Reduced, Remade, Recycled. Keep an eye out for his continued collaboration with Clarks shoes for some futuristic sandals and sneakers! 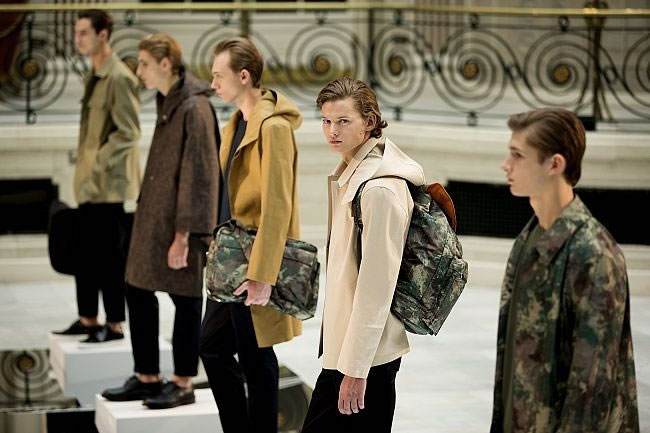 Mazhar, who's more recent offerings have been predominantly black, decided to unusually adopt strong bold colours for his SS17 runway. Models stomped down the catwalk in heavy duty leather moon boots, provided by New Rock, which perfectly suited his red military tracksuits, desert bucket hats and khaki cargo pants. A selection of the effortlessly cool male models wore backpacks to emphasise the sporty side to this collection which came with added detailing of green striped faux fur. Although taking a step away from an all-black season, this was certainly a darker and more industrial side of spring.

Astrid Andersen asks us to consider “time” within her Spring/Summer 2017 collection, the blurred lines between season and nature, how it stretches before us and slips away behind. The harmony of what is timeless becomes one with the discord of things removed from time – a frozen Niagara falls inspiring a Summer collection to be bought in the Winter. This collection sits at the crossroads of the relationship between nature and season and where this aligns and diverges with the push and pull of schedules and calendars in a heady and surreal haze. 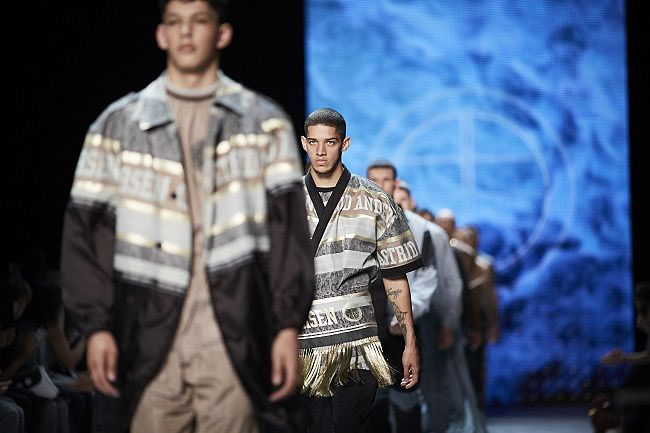 Bobby Abley whisks us away on vacation, flying first class with the world’s most fabulous airline – Magic Carpet Airways. Entirely exclusive, this elite airline serves the rich and famous, taking to the skies in sequin gowns accessorised with matching neck pillows and sleep masks. Sit back, relax, and please take a moment to familiarise yourself with your nearest exits as we prepare for takeoff. This season stays true to Bobby Abley’s signature sports-casual style, re-imagined with tongue-in-cheek slogans and motifs.

Oliver Spencer has a favourite house. This is no ordinary house; it is the Casa Malaparte on the Island of Capri, Italy. A house famed for its imposing modern Italian architecture. Set atop of a vertiginous coastline surrounded by sea. The natural rugged coastline is contrasted by clean modernist lines creating a harmonious relationship. Inspired by minimalist design, Oliver Spencer has created a collection with a distinct 1950’s Mediterranean influence.

This London based label has a huge following and always brings out some of the most creative characters, from across various artistic industries, to attend their shows. Under the creative direction of Marjan Pejoski, models walked the narrow runway in an extremely futuristic and dark Spring/Summer collection. The KTZ logo was ever present amongst monochrome printed suits. The lighter weight summer feel came from short sleeved classic black KTZ hooded sweatshirts and cut out trousers. Heavily pocketed casual outerwear was accessorised with chains and leather giving a nod to religion and multiculturalism. 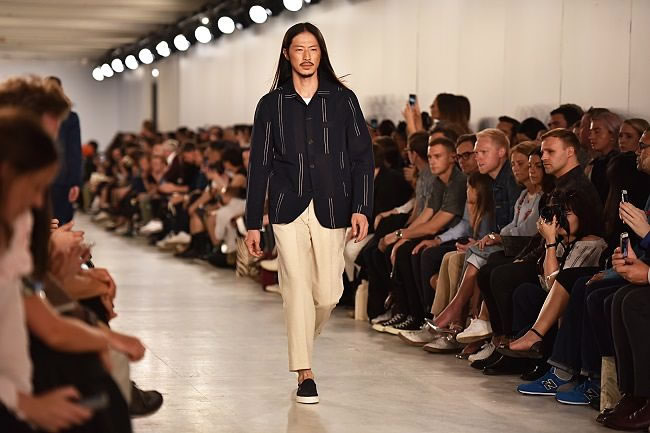 For SS17 Universal Works explore various inspirations from mid-century Cuba, revolution, the influence of the anti-establishment Beat movement in the USA and the graphic design work of Saul Bass. A mix of military and workwear style, trousers with smart jackets, four pocket and point collar shirts and oversized pleated trousers that reference the clothing of the Cuban rebels and Havana locals, a cobbled together blend of army supplies and oversized but well-tailored civilian clothing.

This season Blood Brother showcase their collection for the first time at London Collections Men, and take inspiration from the nostalgic heyday of the great British holiday. The collection is based on people taking a break. The vision is a guy who has just finished work, is late for leaving and scrambling to leave the city for the holiday, but is still wearing his work attire, but in a more relaxed style, no tie, no belt. 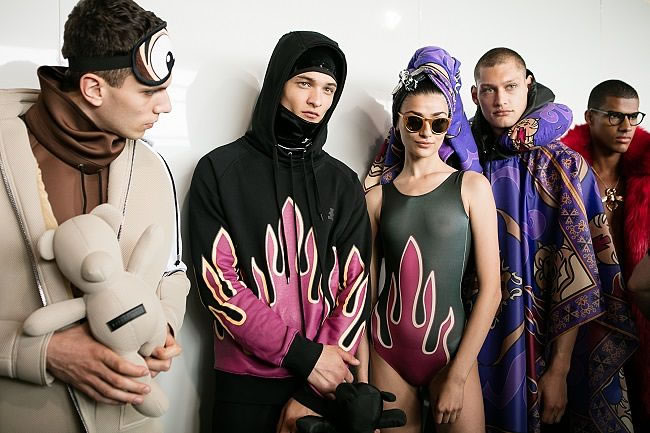 At the start of the 1995 football season Dutch photographer Hans van der Meer began a project which would run for ten years. Travelling Europe he photographed lower league football matches; the players, the spectators, the playing fields, the landscapes and townscapes in which they sat. The men walking in this show come from at least 8 European countries, the wonderfully skilled men and women that have made the clothes are from at least 9. 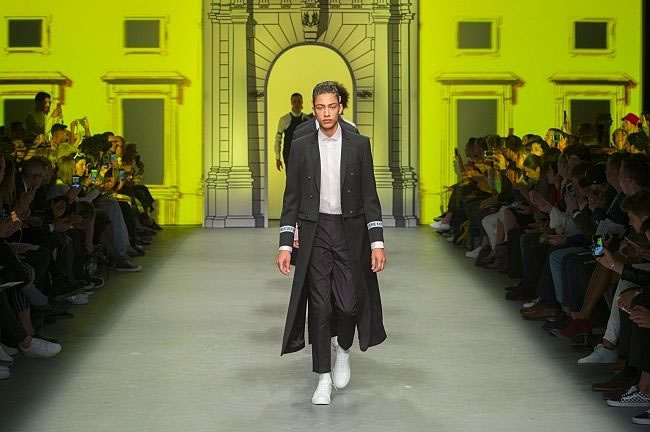