A CITY WHICH IS YOUNG, CREATIVE, COOL AND VIBRANT 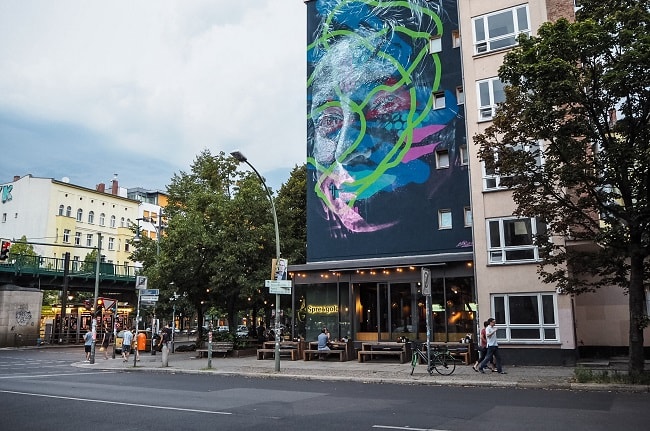 Berlin is young, creative, cool and vibrant. There’s an edge about this lively city, and it gives Paris a run for its money on the street art and graffiti front too. You’ll also notice there’s a big culture towards drinking beers whilst walking through the highstreets and neighbourhoods. A cheap beer is bought from one of the many (and much loved) ‘Späti’ 24 hour outlets and basically consumed on the way to the restaurant, bar, party, club etc. Berliners even have a name for it; “Wegbier”, which simply means ‘beer-for-the-way’. We travelled to Berlin as guests of Air France who are more than just a carrier, but travel experts too - which is where their Travel by Air France guide to Berlin came in rather handy for a few ideas. They fly to hundreds of destinations via Paris CDG, and to Berlin 5 times a day.

Spreegold - A very stylish destination with the latest trend editions in the health scene on offer. The Spreegold-Power-Smoothie, the Spreegold Porridge, the Spreegold pancakes or the scrambled-eggs with truffles and mature Parmesan cheese. Free of any kind of additives you will enjoy pure vitamins and nutrition. Their fine Espresso specialities are prepared with self-roasted coffee using only 100% Arabica beans. 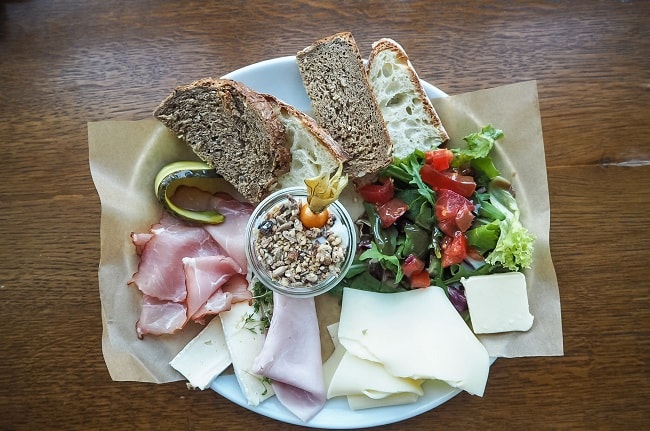 Roamers - Farm house charm with a breeze of California - woody and rustic, stuffed with plants and set to a country music soundtrack - handcrafted food adorned with a fistful of love. If any place could be described as a hidden gem, it’s Roamers. It’s actually in the middle of a residential street. A delightfully tranquil little restaurant, it’s the coolest place you’ll visit in Berlin hands down. We recommend you get there 9:50am which is 10mins before opening time, just to be sure you get a table. Once you do, grab a Kinfolk magazine and enjoy a brunch feast. 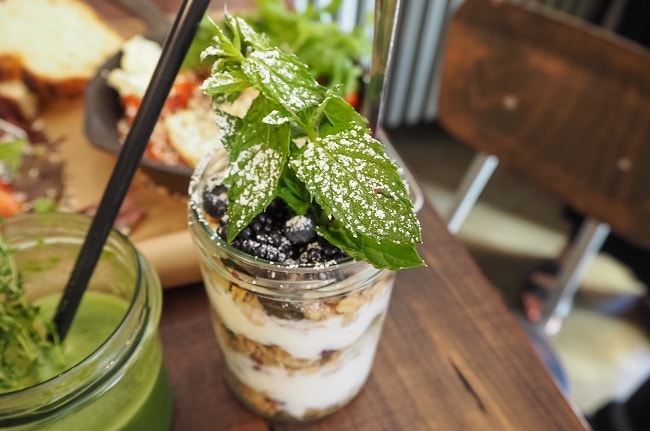 Bonanza Coffee - It took us a while to find this Coffee Roaster but it was a sight to see once we stumbled upon it. Bonanza Coffee gets to call this huge red brick period factory home for their roasting process and public coffee spot. From the moment coffee is planted, until it’s served, their coffee has gone through the hands of countless individuals that are all remarkable within their field. Farmers, planting varietals sacrificing yield over cup quality, coffee pickers only picking red ripe cherries during harvest, importers storing coffee in climate controlled warehouses. Make sure you stock up on a few bags of beans as a souvenir. We certainly did! 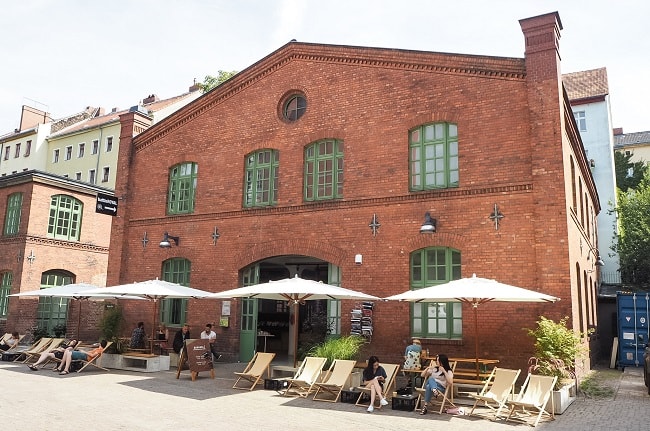 Distrikt Coffee - This speciality coffee shop has a cafe-style breakfast and lunch menu and is set to stunning interior design – wooden and black steel tables and chairs are placed in front of rugged brick walls and tiled floors. Set in another cool neighbourhood, it feels like a unique find that you’ll want to keep to yourself. Their dishes include homemade granola, smashed avocado on sourdough toast and toasted banana bread with caramelized nuts and syrup. 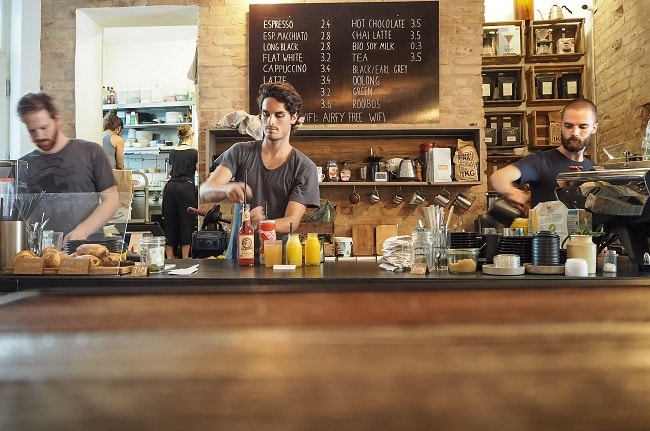 House of Small Wonder - Once you walk up the beautiful spiral staircase at this restaurant and bar you’ll be greeted to a very warm light atmosphere, and lots of wood and plants. The culinary concept follows the footsteps of its Brooklyn location and has numerous Japanese influences: comfort food with organic, local ingredients, freshly prepared with Japanese flavours whenever possible. 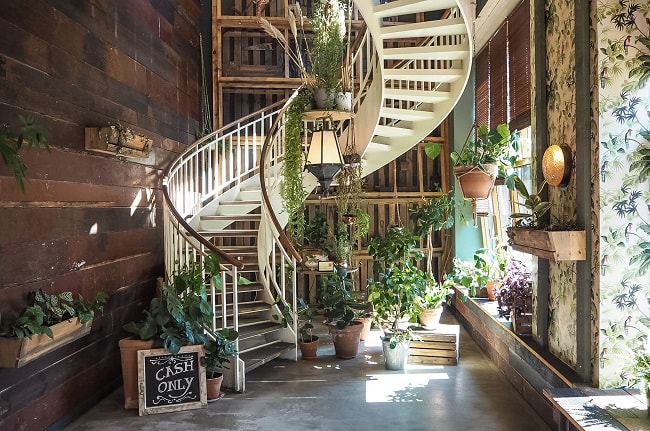 Curry 36 - We got this tip from Air France’s Berlin guide in which they describe it as “the address where hipsters and tourists throng to test the Berlin speciality” – and that very speciality is the mighty currywurst. Legend has it that it was invented in 1949, just after the Second World War, in the Charlottenburg district, and was an immediate runaway success with the US military stationed there. Curry 36 is cheap and only features a sheltered standing area - It’s nothing glamourous but it attracts big queues daily and is worth a try.

District Mot - This restaurant is all about Saigon Street Food and we headed here on a mission to order the Lil Bao Wow burger and it did not disappoint. The restaurant comes complete with authentic Vietnamese plastic stools, spicy sauces and much needed (for sticky fingers) toilet roll holder napkin dispensers on each table. A fun, cheerful restaurant with great tasting Asian foods. 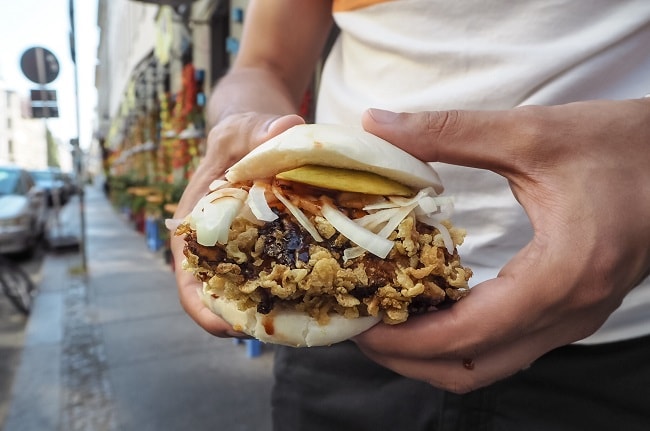 Mustafas Gemüsekebap - We saw a huge queue for this small street food stall when visiting Curry 36. Intrigued and still hungry, we joined the line. Did you know that Berlin is the birthplace of the Döner Kebab? Kadir Nurman, a Turkish immigrant, set up a stall in West Berlin in 1972 selling grilled meat and salad inside a flat bread and the rest is history. You’ll get a very appetising and generously sized chicken Kebab at Mustafas Gemüsekebap for under 4 euros and it tastes magical. It’s a true food highlight, so be sure to visit this place.

Voo Store - This high-fashion shopping destination is a culturally empowered, creatively driven concept space located in the heart of Berlin Kreuzberg, occupying a charming 300 square meter courtyard space on the ground floor of a former locksmiths. The street on which the store sits continues to attribute itself to its unique and progressive approach to contemporary fashion. There’s also a coffee hangout inside known as Companion Coffee. After spending a number of years exploring various roles in the specialty coffee industry in Vancouver, Perth and Berlin, the owners launched Companion in 2013 with the aim of creating a platform that gave them the chance to bring together the aspects of working with coffee and tea that they like best. 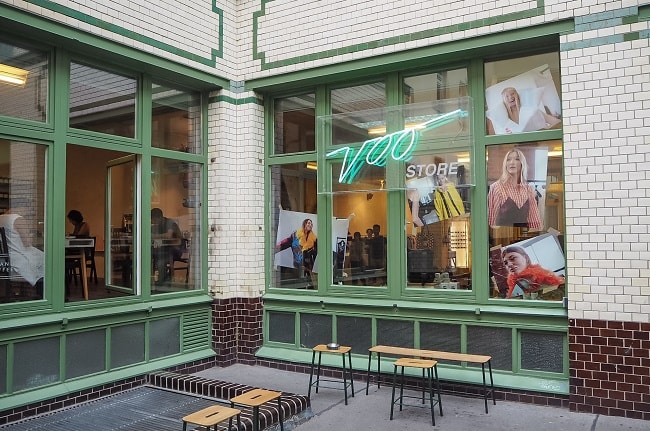 Hallesches Haus - Describing this store isn’t so straightforward. It’s a restaurant serving quality coffee and scrumptious food, a florist selling striking succulents and cacti, a general store stocking outdoors tools such as pocket flasks and raincoats, homewares including candles and lighting, fashion containing backpacks and sunglasses and a private event space. You'll spend hours here and leave with a bag full of wares. 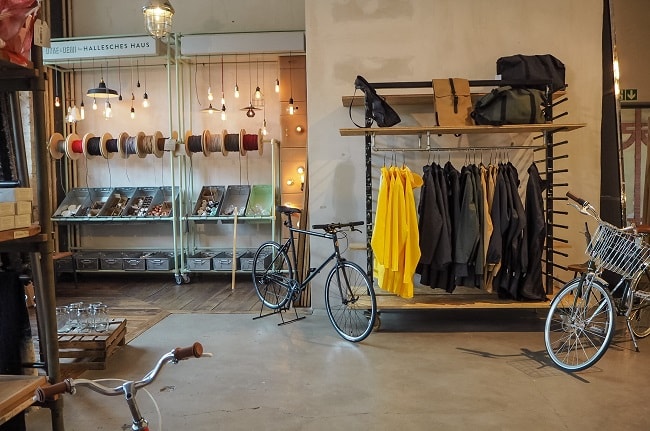 Brandenburg Gate - The Brandenburg Gate is one of Berlin's most important monuments – a landmark and symbol all in one with over two hundred years of history. A former symbol of the divided city, it drew visitors who used to climb an observation platform in order to get a glimpse of the world behind the Iron Curtain. When Germany was reunified following the fall of the Berlin wall in November 1989, Brandenburg Gate quickly reinvented itself into a symbol of unity.

Holocaust Memorial - Close to the Brandenburg Gate in the heart of Berlin, the Memorial to the Murdered Jews of Europe is also found. It can be approached and walked through from all sides, serving as a central place for remembering and reminding people of the Holocaust. On an area of about 19,000 square metres, the New York based architect Peter Eisenmann set up 2,711 concrete pillars - so-called steles - of varying heights to create a grid-like structure which is a unique and emotional sight to see. 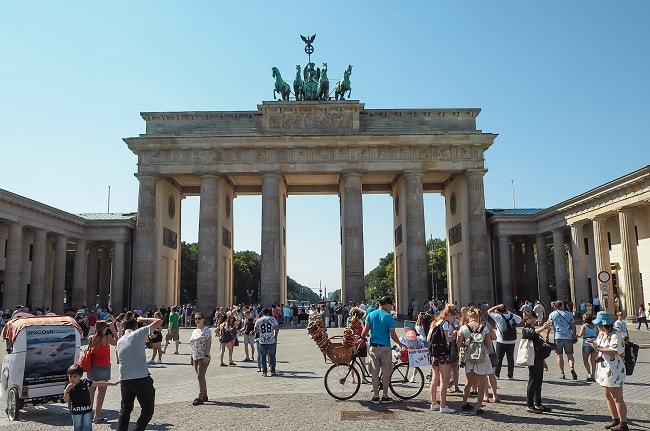