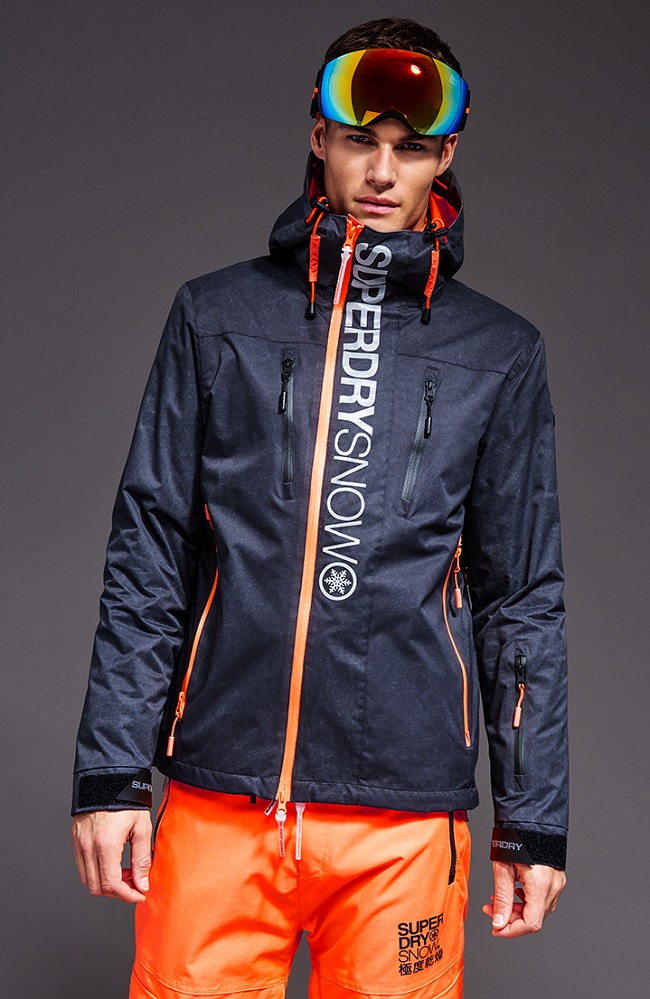 For a second season Superdry has collaborated with French base-jumper, extreme skier and skydiver Matthias Giraud for their new snow collection. Consisting of a large selection of high-tech and après jackets, snow trousers and carbon infused base layers, Matthias has offered his expertise from the mountains to create Superdry clothing perfect for hitting the slopes. Yet again, Superdry have produced a collection that combines style with performance and offers options for those who love to go loud with bright camouflage or for those who prefer to stick to more subtle and muted tones of grey, navy and black. We particularly like the Snow Windbomber jacket in grey marl, with a double layered collar to keep you warm and plenty of pockets to conceal your smart phone and wallet from any moisture.

Matthias Giraud is an ideal match to aid the design of Superdry's snow collection as he has a vast amount of experience out on some of the toughest mountains in the world. He’s been chased by an unexpected avalanche and once lost a ski during his attempt to be the first ski base-jumper off the Matterhorn. He certainly has an abnormal lack of fear when it comes to a challenge and he knows exactly what he needs kit-wise to achieve his goals. From personal experience of wearing Superdry's snow gear whilst snowboarding, it really does fit well and Matthias Giraud confirmed the brand's success on that front. As a brand that is more focused on casualwear, their snow collection still fits into this category as it can be worn on and off the slopes. It also fits perfectly with their continual expansion of their activewear into the sports market. 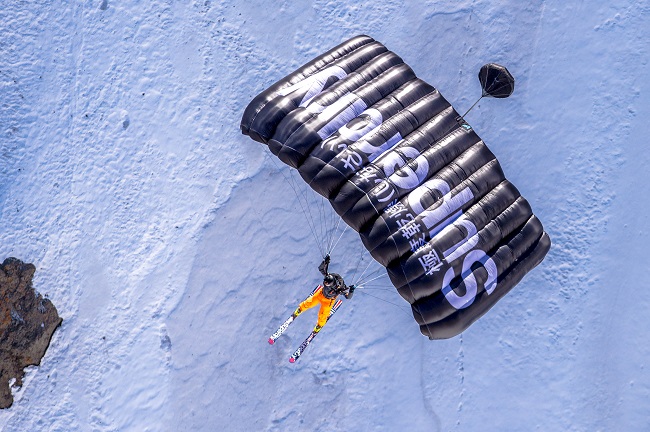 MenswearStyle was invited to meet with Matthias to discuss the new season collaboration and his relationship with the brand. The launch revolved around the release of his impressive second short film with Superdry which involved a base-jump off the treacherous Heaven's Eleven in Colorado. To realise the extent of the challenge, just watch the video below.

How did your relationship start with Superdry?

“I was originally in touch with James Holder a while ago. I was already a fan of the brand and I was really interested in working with them as soon as possible. This was before they were even making snow kit. For a couple of years, I was trying out some product; jumping with it, wearing it and I loved it. Then the first snow collection came around and I spoke to James and said I could probably help out with it. We started working together and did our first film last year in Chile, it went really well and this year we are back with another amazing project. It has been a fantastic journey so far.”

What makes you such an admirer of Superdry?

“It is the style and the fit of their clothing. They really are fantastic on that side of things. When you ski you want to be comfortable but you also want to look good. It is the best balance between the two.” 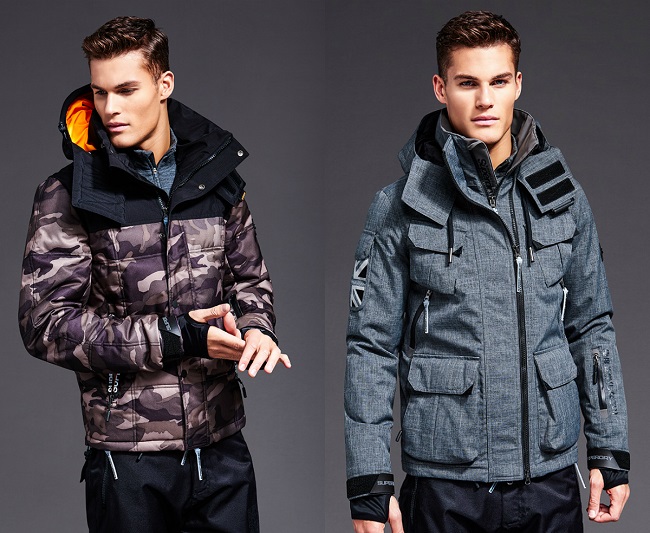 Do you think one is more important than then other when it comes to performance and how it looks?

“You certainly don’t want fashion before function when it comes to mountain kit. It has to be the right stuff. Especially with the new season coming out and pieces like the Super SD jacket. I have been in situations before with other brands where it has been more about the look and it hasn’t quite hit the mark. The last project we did was incredibly daring and the Superdry kit was awesome for it.”

What part of the technical side of the kit is the most important to you?

“You don’t necessarily want too much heat, especially when you are travelling on the mountains. Ideally you like to be able to layer. That is what I really like about the Super SD jacket, you can layer up under it really well. The fit is very important because if your clothes don’t move with you, then it becomes a hindrance with skiing. The fit is 95% of it, then you can tweak things here and there. A good fit is actually really hard to achieve and for skiing it is crucial.”

When it comes to the style of snow kit, what is your preference?

“I love the accents, so I love the bright orange snow pants. I really like the fact that jackets are almost tailored with the silhouette and figure, but without being a hindrance or constrictive. It is the right balance of relaxed clothing whilst having that awesome tailored look with a few pops of colour here and there. I can be the guy that wears all really dark clothing on the mountain or the guy that is really out there” 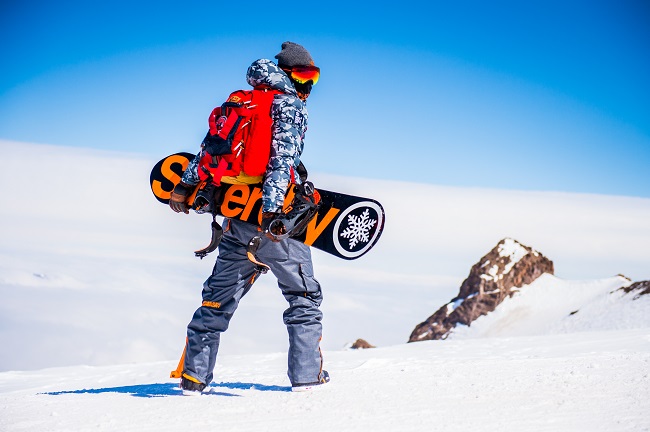 Your newest adventure was filmed in Colorado. Can you tell us about that and why you chose to film there?

“I live in Colorado. I went straight from the Alps to Durango in Colorado. I studied business over there whilst skiing and then I got sponsored for skiing. I started participating in extreme ski tournaments, the free-ride series, and then I started sky diving in New Mexico. I was filming in Telluride for a ski movie a few years ago and saw the line called Heaven’s Eleven, which you will see in the film, and I just thought 'Wow that line is insane! Do people even ski that?!'. A friend of mine said he skied it once but that it is very tricky due to a huge traverse. Although extremely difficult, I thought I could probably do that with my parachute and make the descent without the traverse. We worked on it for 3 years because the problem with the San Juans is that they have the highest avalanche rate in the world. You have to make sure the snow is stable when you go there. So the hard part was to find a window for the right snow and the right weather; not too much wind and perfectly visibility. We got the call that the weather was going to be good in two days and we knew we just had to go. If we had missed the window, for all we knew it could have been another 5 years for those conditions. Somehow we got it this year.”

You do some pretty crazy things in general, how do you choose your challenges? Do you always look for the most extreme?

“No not particularly. Normally when you are involved with brands like Superdry, you focus on the creative aspect of it. It is a bit like the cliché when you are an extreme athlete and you make a living out of action sports and people think you have to do the latest crazy stunts. It is great that people are doing triple back flips on motorbikes but for me it is about being a mountain man first, being inspired by the mountains and doing unique and beautiful things up there. Being able to blend mountaineering, skiing and base-jumping means you can access terrain you couldn’t otherwise ski, and that is amazing.”

When you are jumping off a mountain and then something like an avalanche occurs or you lose your ski, what goes through your mind?

“With the avalanche, actually luckily everything went according to plan. It just happened but I had skied that spot several times so there was no problem. I had to think how the air was going to affect my parachute but luckily it all went really well. When I snagged my ski on the Matterhorn, it was definitely a survival situation but failure is not an option. You are in the heat of the moment and you have to do everything you can to fix it and be safe. It ended up working out and I am still here.” 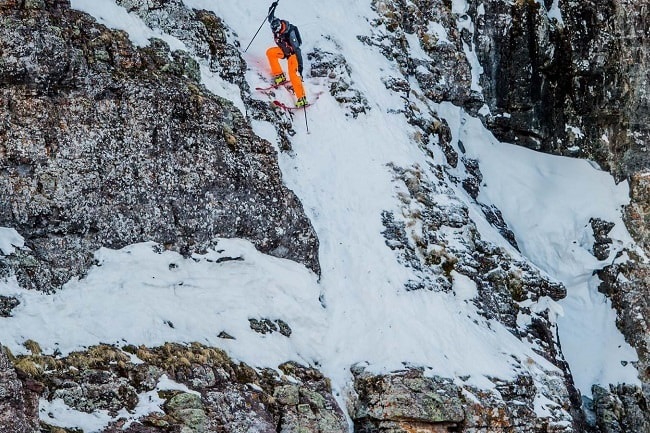 Do you prefer to jump out of an aeroplane rather than attacking a normal piste on your skis? Is normal skiing tedious for you now?

“I do a lot of skydiving too and I used to be an instructor. Between skydiving and base-jumping I have about 1200 jumps. I consider myself more of a base-jumper than a skydiver. To be a big mountain free-skier you need to train with regular skiers so I was actually a slalom skier and competitive skier for years and then I competed in big mountain competitions. Then I started putting on crampons and it went from there. So you have to start somewhere to begin putting the pieces of the puzzle together. You have to be well versed in it, so I still enjoy going to the usual ski areas and doing the normal runs pretty much every other day, I don’t get bored of it.”

Is there anywhere you haven’t been that you would like to go?

“Most pro-skiers go to Alaska every year. I actually go to the Alps because, especially for ski base-jumping, you have more reliable weather. There are a few things I am looking at in the Himalayas too.”