Written by Ivan Yaskey in Tips & Advice on the 5th July 2017 / What’s the Right Way to Wear Lace? 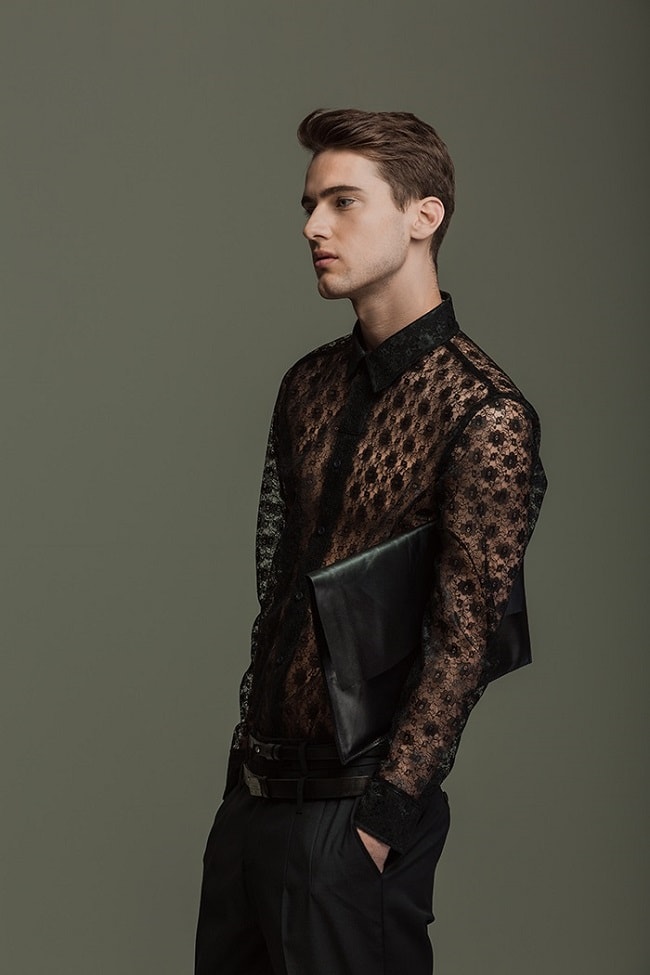 Unless you’ve shut off the news for over a month, you might have noticed a viral story about rapper Cazwell donning a brightly coloured, fully lace jumpsuit for his “Loose Wrists” music video. The highly shared piece comes at the heels of another viral hit – ACED Design’s RompHim – that has since turned into a meme. Yet, as one shortly lived phenomenon transitioned to the next, the stories and subsequent comments had the tone of, “Can you believe any guy would want to wear this?”

But, there’s a clear demarcation between facetious, over-the-top, and impractical fashion trends and, frankly, more focused and sophisticated style. What makes the Hologram City shorts in “Loose Wrists” fall into the former isn’t that they’re solely lace; rather, the piece blends in too many components and tries to do too much all at once. The garment itself ends up being an exhausting eyesore that only makes sense at an outdoor rave – and that’s only if you don’t mind the chafing that comes after a few hours of sweating in it. 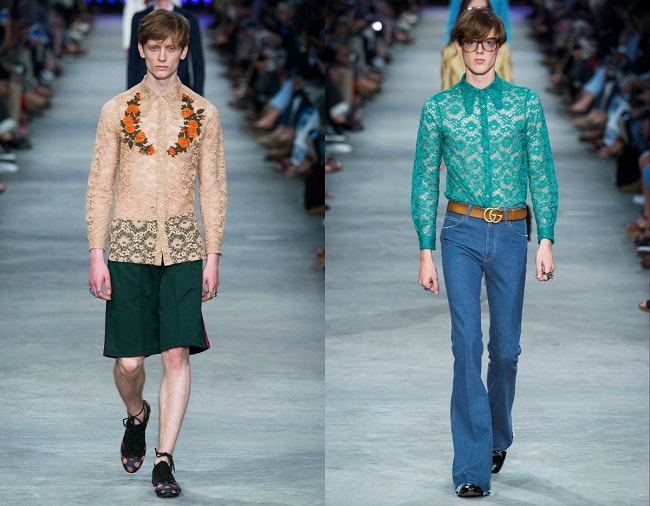 This clear and absolute fashion-don’t doesn’t mean lace is off the table. Instead, recent seasons’ collections from Burberry, Gucci, and Alexander McQueen indicate that, as a pattern and textural piece, the material has plenty of potential, provided you factor in cut, colour, and transparent versus opaque fabrics.

Critics, when reviewing Burberry’s SS16 collection, emphasized the semblance lace has to a pattern – like floral and geometric prints finding a detailed and delicate middle ground. With this notion in mind, anything lace is best treated like a statement within your look that’s essentially the centre point. Thus, with colours and cuts factored in, the more neutral and slimmer they are, the better. Within this context, consider lace as part of a structured or fitted button-down, ideally in white, black, or even tan, or as an accent to a solid-coloured garment, such as around the collar, the yoke, or cuffs. 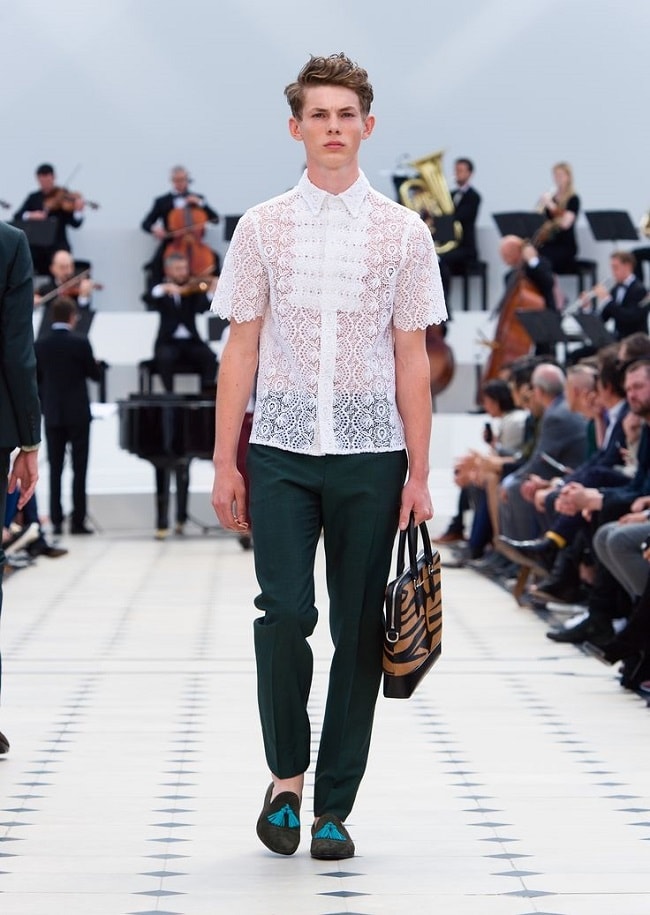 Be a Modern-Day Dandy

By this, we don’t mean frilly and overly ornate. Rather, the modern-day dandy is part rock star, part gentleman, and always stylishly streamlined. Through these lenses, he’s one to experiment with style, but understands the impact restraint and refinement have. Think of Harry Styles’ fashion choices, post-One Direction. Lace, in this picture, has a softer, feminine-dabbling quality, which in turn lessens the angular structure of a slim-fitting suit, adds a gauzy layer to his usual ensemble, and creates a secondary, textural dimension to classically styled, solid-colour fare.

Lace shirts, unfortunately, leave very little to the imagination, even when you throw a blazer over it. As such, on a practical, everyday level, layering is the key to incorporating it within your wardrobe. So you look less like you’ve got curtains draped over your frame, make your base a fitted, solid-colour tee or vest, and then, add a looser-cut but still structured lace shirt in a contrasting shade on top. As a third layer, finish it off with that blazer or even a solid-colour suede bomber jacket. 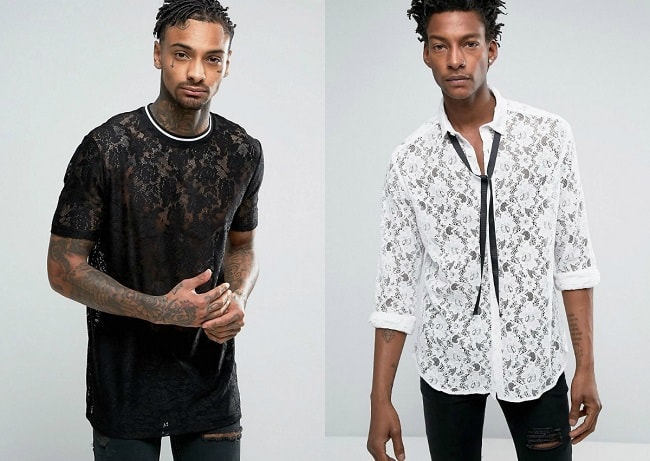 Paneling, in which lace accents an otherwise opaque garment, presents another practical approach. More common, at least for now, as an East Asian streetwear style, paneled shirts apply this transparent, woven, or otherwise sheer material around the yoke, along or covering the arms, or alternating with a solid material across the body. As such, you get coverage in just the right places, and the lace’s patterns and textural difference create an effect similar to colour-blocking: Geometric and angular, without as great of a contrast.

Not every lace print needs to look like a set of doilies covering a coffee table. As a result, to counteract its dated or unnecessarily extravagant character, some designers have started reinventing the pattern on their own terms. Case in point is Balmain’s Olivier Rousteing, who, for his SS16 collection, revised this template. Pieces, often resembling a cross between workwear, safari style, and clubbing gear, reintroduce a beefed-up version, often with a geometric arrangement of lines and repeating shapes. It’s an understatement to call it an edgier, more masculine interpretation of a traditionally feminine material; rather, Rousteing’s stands out for a more rugged, almost net-like quality. 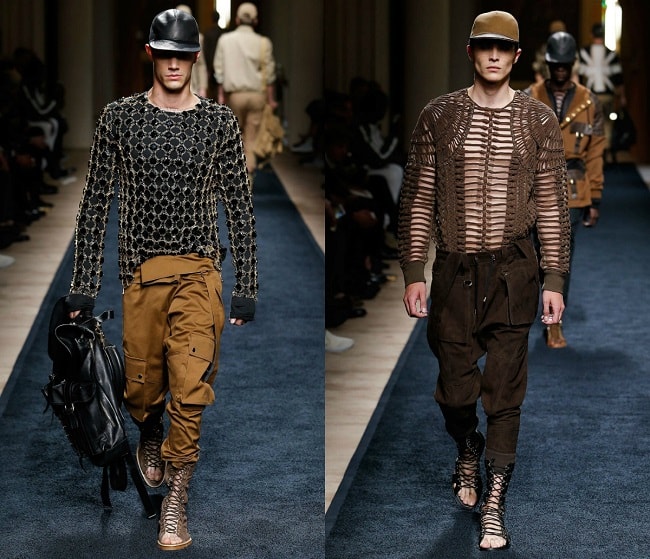 Print It All Over

Especially when the temperatures drop, lace as a material is rarely practical to wear. But, what if you want something more substantial? To step away from anything sheer, at least through the autumn and winter seasons, consider a lace pattern. From the past few years, brands covering a broad spectrum – Alexander McQueen for something high-end, Brooks Brothers for everyday suiting, and ASOS for more streetwear-influenced pieces – use the more intricate, classic pattern as a print over a blazer, shirt, or even a pair of trousers. The result, whether light and subtle or with more contrasting hues, has a similar effect but eliminates the need to layer and gives you a piece you could theoretically put on for work.