THIS SEASON JEANS ARE SEEN AS SOMETHING TO PLAY AROUND WITH 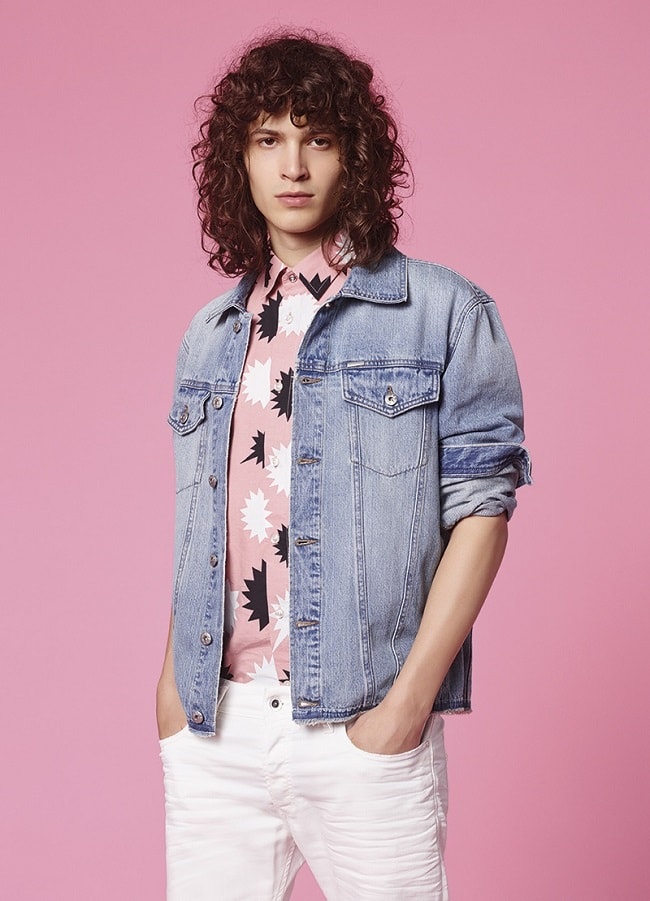 If someone told you, “Denim’s coming back for autumn 2017,” you might respond with, “Did it even go away in the first place?” And, generally, you’d be right. However, within the menswear sphere, jeans, in more recent seasons, have devolved from an inspiration-worthy piece into a background base garment with its dark or medium wash, straight-legged, or skinny cut. Rather, with the exception of wide-legged or ultra-skinny silhouettes or an Americana-influenced workwear-inspired context, you and designers stopped giving them thought. Essentially, they were just there, and that was that. But, pulling from the 1970s and ‘90s, AW17 collections now see jeans as something to play around with – try a new cut, add some different washes, and throw around a few embellishments. So, what’s new this season?

Darker jeans, until fairly recently, projected a professional but laidback personality: You prefer to be polished and put-together, but aren’t entirely straight-laced to the point that you eschew denim completely. These trousers, based on a wider cut, could easily compete with chinos, offering a heavier take for autumn weather. 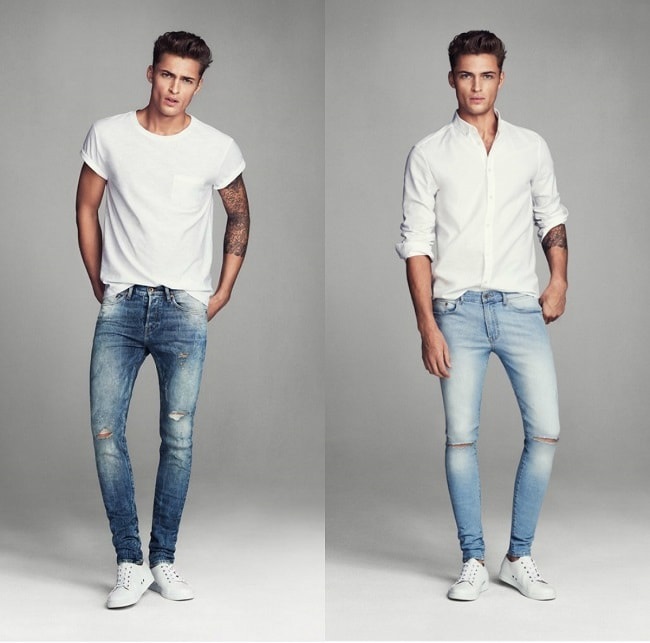 But, brands have started lightening washes, seemingly adding just a hint of indigo or even bleaching the denim. The result comes off as intentionally faded, like you’ve been wearing them out in the sun for years. Accompanying, a broken-in look with moderate distressing completes that aura. On a general level, Levi’s classic 501s start as your foundation, but for something washed-out, stonewashed, and sun-dried, consider steering away from the standards. And, going just a few steps further, albeit in a different direction, white denim takes this concept to an extreme. While no drop of blue touches the material, the rough texture unmistakably shows you still prefer this casual staple.

A Slim, Straight, and Cropped Intersection

Over the past few seasons, denim has experienced a divergence. On one end, “skinny” has turned into spray-on jeggings, with enough elastane added to rival activewear with its stretchiness. On another, infusions from wide-legged trousers have extended the circumference, resulting in structured, somewhat cropped silhouettes. Reaching a sort-of truce between the two, the straight-legged, slim, and cropped cut combines all elements into a reasonable compromise that flatters plenty of body types. Not baggy, not falling above the ankle, and not overly tight, this precisely balanced point never makes an extreme statement, essentially offering room for other attributes like the wash, distressing, and embellishments to come forward. 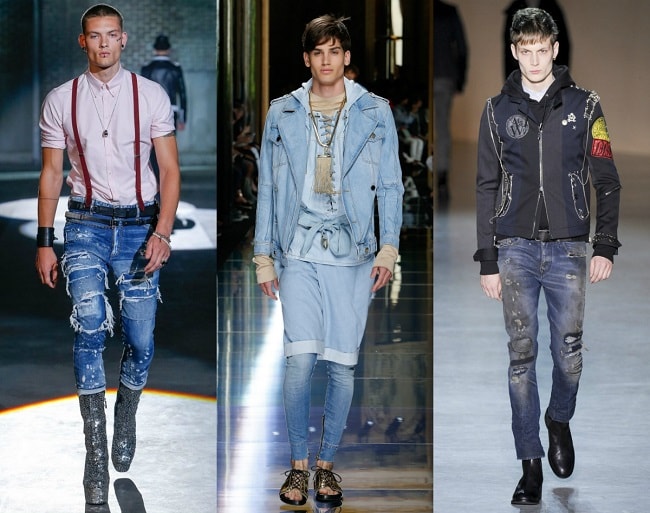 “Distressed” denim goes along a spectrum. On one end, you’ve got “raw” jeans – ripped, cut hems and waists complementing an obviously matte, textured look that often gets called “selvedge” denim. Going farther, various stages of fading – from moderate wearing and light patches through clear bleaching and splattering – break up the material’s monotony. Through the next stage, full wear, tearing, and extensive ripping cover the surface, reminiscent of something from the Grunge era. Thus, while “distressed” can mean anything from faded and textured to bleached and shredded, the concept expresses the same sentiment either way: Solid and standard have gotten dull. Unless you’re wearing coloured denim, aim for some kind of variation, whether that’s jeans with obvious wearing, some kind of fading, or clear rips along the front. 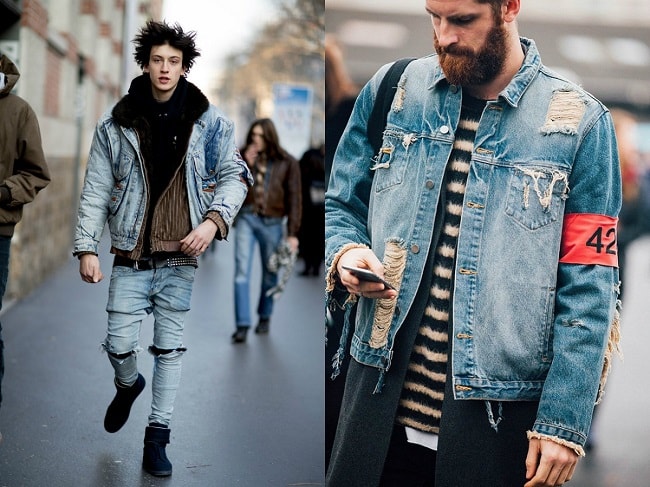 Falling outside the logical circle of influences, motocross seems like a stretch for denim. Yet, as one streetwear trend seeing its profile gradually grow, moto jeans retain the same thick, woven fabric within a tapered silhouette, all while adding pad-like patching to the knees, metallic, slanted zippers, and sharp colour-blocking used by activewear brands Fox and O’Neill. Of course, you wouldn’t wear these to actually race, but the concept projects a figurative need for speed: You’ve got to get up and go, and these jeans will be the style taking you to that destination. 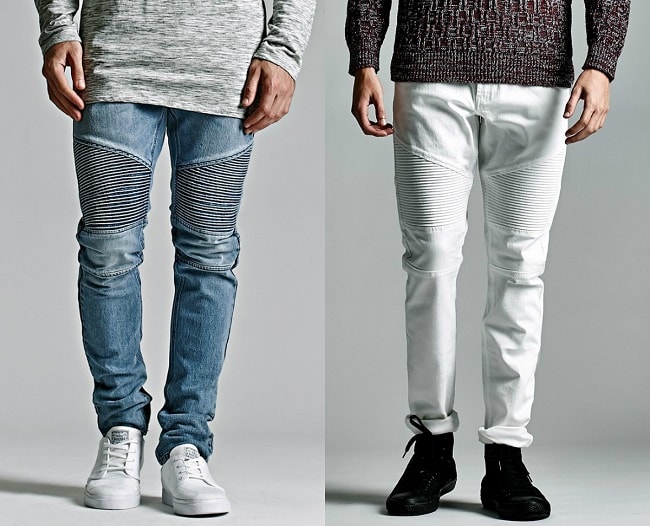 Break It Up and Embellish It

If altering the material isn’t enough by itself, brands seem to pose the question, “Why just stick with solid-colour denim?” Blame the chambray shirt, if you will, for introducing a colour-blocked concept that segues into patchwork denim: Contrasting pockets and cuffs for beginners, and a put-together, stitched combination if you’re striving for that DIY vibe. But, in a move that takes us back to the 2000s, embellished denim seems to be having its moment simultaneously – albeit, not in a stitched and studded back pocket way, like some circa-2008 Ed Hardy-wearing bro. Rather, this is an either-or type of scenario, with stitching and floral imagery around the waist and pockets and down the legs – elegant, this time, instead of tacky – or patches along the exterior. Perhaps inspired by a ‘90s-era denim jacket, these pieces seem reminiscent of the days you might’ve added band or statement patches to signal your personal tastes. 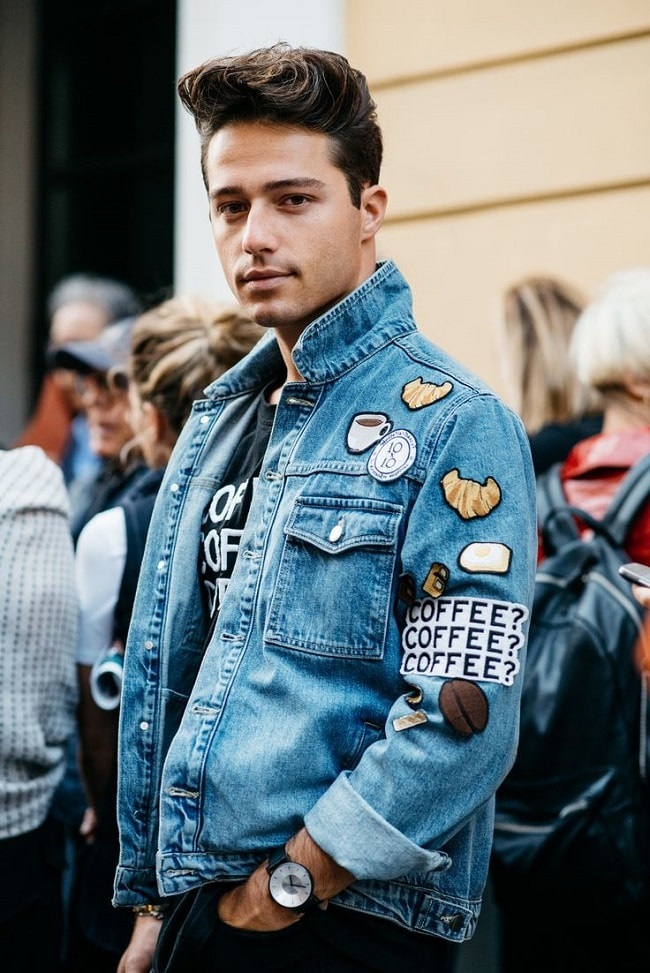