SHED THE RETRO IMPLICATIONS AND KICK UP YOUR AW17 STYLE 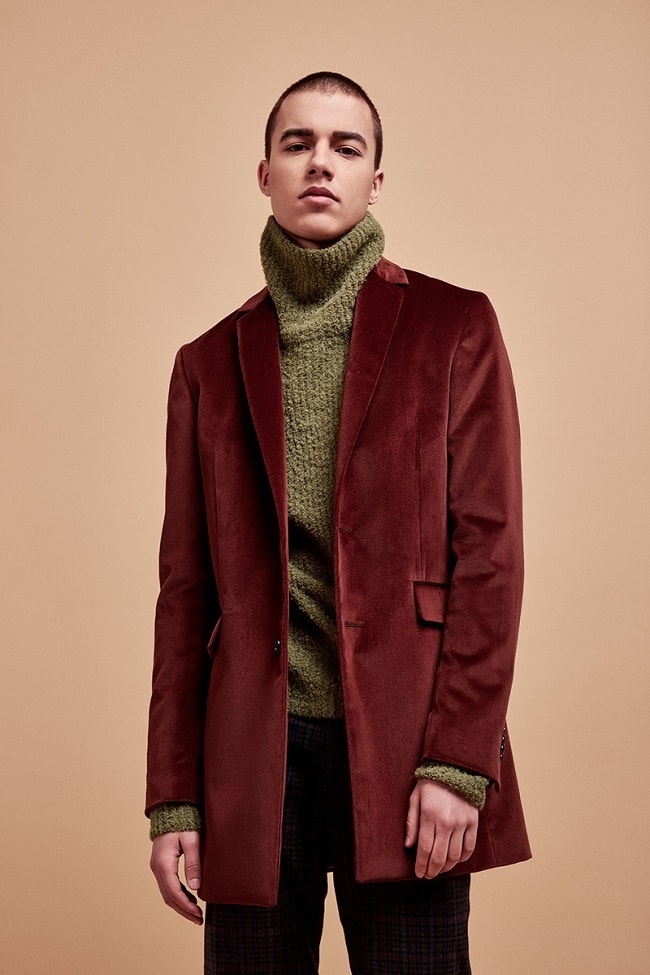 Mention 'velvet' and you’ll get two types of reactions: intrigued, likely in response to its vintage-leaning nature, and revulsion, also for the same reason. As one undercurrent through several Autumn/Winter 2017 presentations, velvet as a concept conjures up a slew of dated imagery – from the facetious like Austin Powers through once-trendy-now-a-punchline Juicy Couture velour track suits. As a contrast, velvet’s slow emergence in menswear hinges on its viability as material: Through slim-cut suits and solid-colour blazers, we’ve seen how it fits into our everyday wardrobes over the past few years. So, to shed its retro implications and to kick up your AW17 style, experiment with the following:

You can look – or you can touch. Giorgio Armani’s AW17 presentation at Milan Fashion Week made you want to do exactly that – reach out to feel a lapel, touch the sleeve of a structured blazer, or slip on a loosely cut set of trousers. With what might have appeared as a foundation piece – an ordinary black dinner jacket, for instance – the designer forces you to do a double-take: What is it, and how do I look like that? Velvet adds to the structure already established by faux fur and shearling, albeit refining it and, in the case of Giorgio Armani, seeing texture as an elegant accent that’s transformative by itself. Yet, Etro’s AW17 presentation at Milan represents the antithetical side: Bold, colour-saturated, vintage-inspired prints juxtaposed with velvet fabrics. Sure, certain items start to resemble casino carpeting, but that’s also partially the point: You can be staidly classic and somewhat aloof or you can use the same material to ostentatiously display all-out luxury. 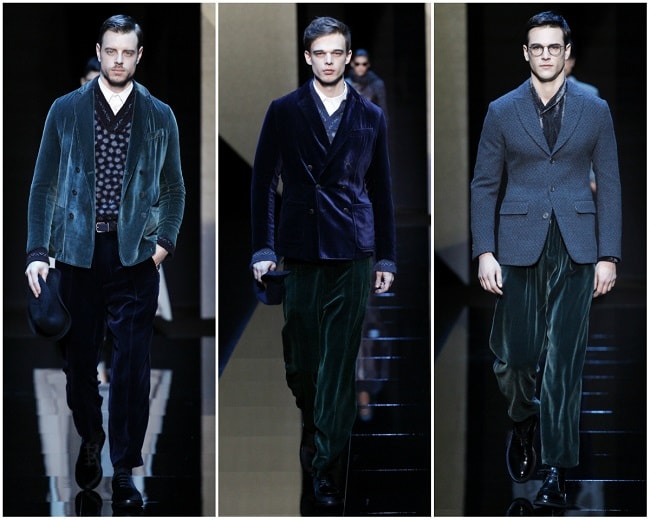 Two styles that are one in the same boil down to a single silhouette: Unstructured, with no buttoned or zippered front, and a belt tying it all together. Etro’s AW17 collection introduced the former, giving us a piece that, by name, seems reminiscent of the late Hugh Hefner’s heyday at the Playboy Mansion. Yet, while an at-a-glance skeevy character is easy to dismiss, the style strips out those implications. Rather, what’s turned into an overshirt – think flannel, denim, and oversized western pieces – carves out a higher-end niche. Just by extending the length, the robe jacket turns into the wrap coat, seen prominently in Joseph Abboud’s Gothic-influenced AW17 collection that seems to directly draw from anime features like Vampire Hunter D and Kuroshitsuji. The longer cut extends its coverage and, simultaneously, reaches the perfect point between effortlessly casual and calculated sophistication. 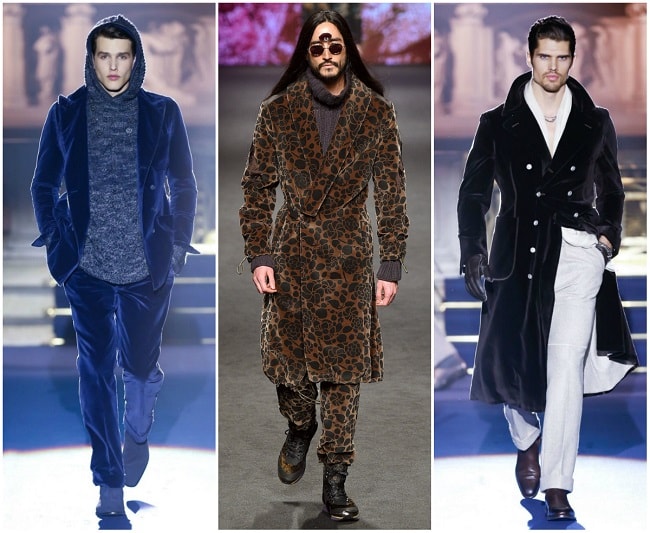 For another pop culture reference, the dinner jacket – really, this season’s ubiquitous but less talked-about piece – is Jay Gatsby – specifically from the Baz Luhrman movie starring Leonardo DiCaprio. Its seemingly boxy-yet-relaxed, frequently double-breasted form is all about retro-tinged splash and ultimately having a good time, wherever you happen to be wearing it. Simultaneously hinting at New Wave styles, its slimmer, shorter cut sets the stage for embellishments that could rival a souvenir jacket. Dolce & Gabbana, for starters, fleshed it out with floral patterns, while Ralph Lauren Purple Label nodded to Mongolian explorers with its series of Eastern influences. The key to pulling off the dinner jacket, though, is avoiding the completely coordinated suit look. This is for when you’re looking to get dressed up – but not that dressed up. You’re not off to a wedding or red-carpet event, so break up your top and bottom. Keep the texture and embellishments the focal point, and through a waistcoat and slim trousers, opt for darker shades. 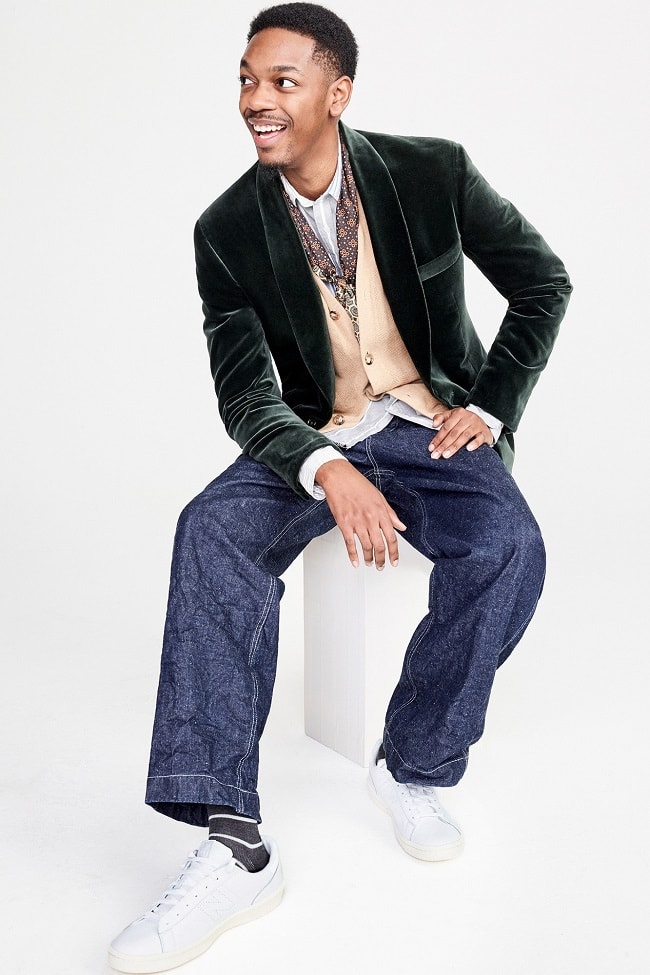 Much of this perspective on velvet comes down to informal, almost relaxed cuts, and unstructured blazers fall right in line with this rule. Better yet, the soft material opens up several choices for layering. Exemplified by J.Crew’s AW17 collection, texture upon texture reinvents this fall standard, with velvet complementing sweater knit and silk and adding a jarring contrast to joggers and a windbreaker. However you’d wear this single-button, somewhat spacious piece, the fabric’s inherent mysteriousness implies you’re dressing up now – and aspiring toward something greater later on. 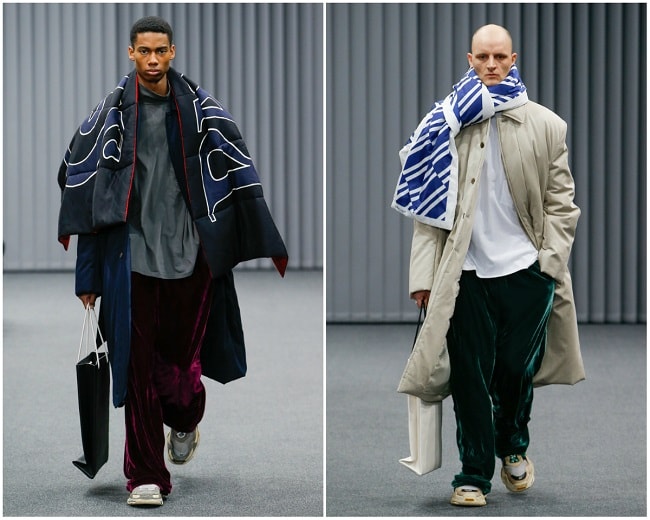 Luxurious track pants? Sounds practically oxymoronic. Here’s something theoretically you’d wear to lounge around in first and then maybe keep on through your workout routine – or an informal kick-the-ball-around game out on the field. Coating it all in velvet appears counter intuitive – what, exactly, can you do with these baggy trousers, then? – but based on streetwear-influenced lines like Jeremy Scott and Balenciaga, turning a purely practical garment into a seemingly impractical piece is like having one of those Supreme bricks. There’s no use for it, but it sure looks cool. Although Juicy Couture set the template for women close to 15 years ago, there’s still a method to this modern menswear trend. Illustrated by runway presentations, the trousers have so little structure most would describe them as 'voluminous' – almost as if they were pyjama pants one size too big or a skirt sewn up the middle. And, while materials go from standard to crushed varieties, colours stick within a rich, almost jewel-based palette, as if to highlight its obnoxiously high-end status: emerald green, royal purple, midnight black, and darker blue hues.