THE STANDOUT SHOWS AND HOT TRENDS FOR AUTUMN/WINTER 2018 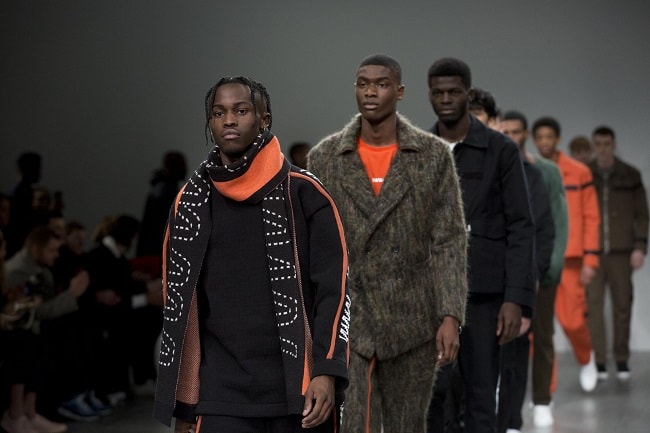 Now in its 11th season, London Fashion Week Men’s lasted from January 6th through the 8th, but this year, a few absences and new additions shook up its typical established-meets-experimental feel. First off, Burberry and J.W. Anderson – two long-standing designers – decided to opt out of the men’s-only week and, instead, plan to blend their women’s and men’s lines for the February event. While other recognisable brands – Band of Outsiders, Christopher Raeburn, and Lou Dalton – returned, the three days shed more light on up-and-coming lines – including ones that previously presented at MAN – and younger designers. As such, this year seemed to take a two-pronged approach: Look back toward nostalgia in some form, and throw it all to the wall to see whatever sticks. Here are the highlights and trends:

If there’s any place to begin, it’s with the somewhat pedestrian What We Wear. While one of several newer brands showing, the line helmed by Tinie Tempah has garnered a reputation for its tracksuits, and starts exactly from this spot. But, what could’ve been completely predictable entered a new chapter: Workwear-influenced pieces, ones specifically inspired by London’s public service workers, manual laborers, and uniforms. As such, wider sportswear silhouettes slimmed down and got angular, all while light brown and olive green shades hinted at their source material. 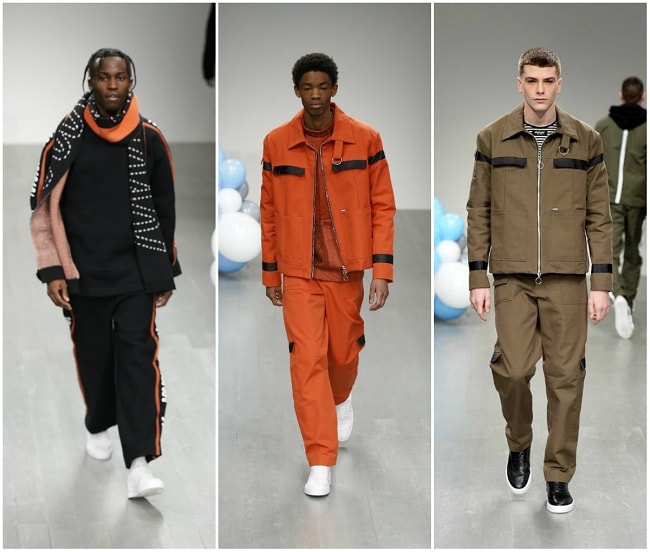 Bobby Abley, too, pulled directly from traditional sportswear-influenced streetwear yet went about it in a playful manner – tossing in Looney Tunes imagery. For those old enough to remember, the pieces recall those hip-hop-influenced urban Looney Tune tees in the mid-‘90s, albeit in a less literal fashion. Sure, there’s overlap, but 25 years ago, who would’ve worn the Road Runner on a dress-length colour-blocked sweatshirt or a fuzzy Tweety Bird pullover? Less in your face but just as nostalgic, Lou Dalton turned her AW18 collection to memories of British autumns in Hygge. The silhouettes – slouchy pullovers and wide-legged trousers – serve as a template for a range of knits, including chunky textures, fine-gauge merino, mohair, and lambs wool. The result brings together the tech construction of such naturally warmth-retaining materials with the style element many active and outdoor brands regularly lack. 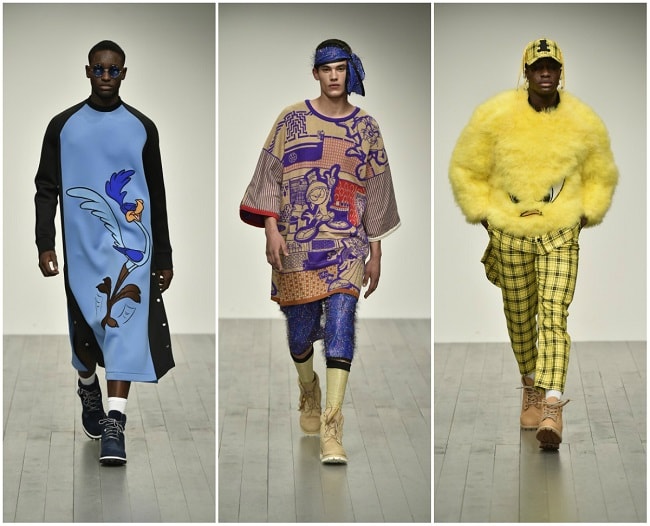 Perhaps as one of the three-day events' major highlights, Craig Green’s Vauxhall AW18 show progressed from light variations on an everyday white button-down, black-trousers theme to full-on costume – usually the type of thing you’d see from someone like J.W. Anderson. Green divided the focal point between two pieces – long, intricately colour-blocked jackets, often blending quilt-like textures and geometric prints, and wooden vessels reminiscent of an Ojo de Dios spread out over the body. In between these two, military hints – khaki and olive shades combined with wider, pocketed silhouettes – implied a progression from an ordinary, 9-to-5 life to wartime. Yet, the two-time British Menswear Designer of the Year explained that the collection reflects more of a child’s vision of fantasy: more specifically, the robes resemble “human tents” and the wooden shields old, antique clocks you’d find in a relative’s house. 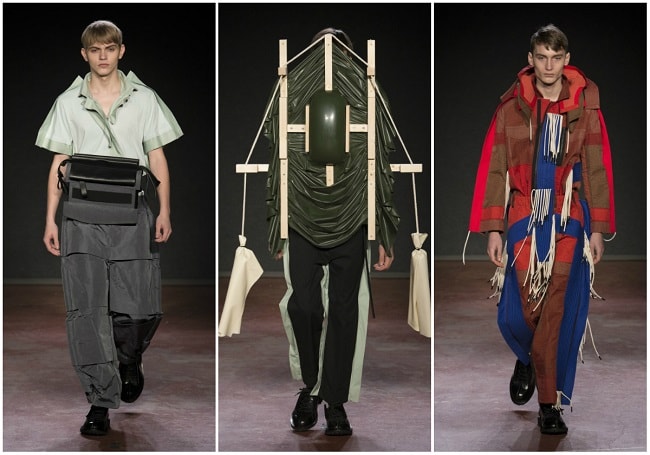 More subdued but also referencing youthful innocence, Kiko Kostadinov directly referenced Barbet Schroeder’s coming-of-age films More and La Vallée, all while incorporating his footwear collaborations with Camper and ASICS. However, what could’ve ended up as a retro-romanticising oeuvre had a timeless quality to it. Slouchy, shapeless, yet occasionally boxy silhouettes reflected decades’ past imaginings of the future: Think Logan’s Run, albeit with post-Soviet elements and washed out hues.

Why these two didn’t merge sooner, we can’t say, but the ‘90s prove to be an overlapping point for both long-standing trends. Perhaps the most literal, John Lawrence Sullivan’s show – itself a variation on all the ways you can wear black leather, high-waist jeans, and power suits – might have well been called “Reconstructing the Cowboy and the Businessman.” On one hand, his mix-and-match approach spliced together the Marlboro Man’s rugged Western fantasy with the dark cloaked mystery of the Vampire Hunter D movies. Yet, merging two seemingly disparate elements doesn’t stop there. Rather, the decade’s uptight stalwart sees its banality replaced with modern hues and materials – turquoise, purple, and crushed velvet, specifically. 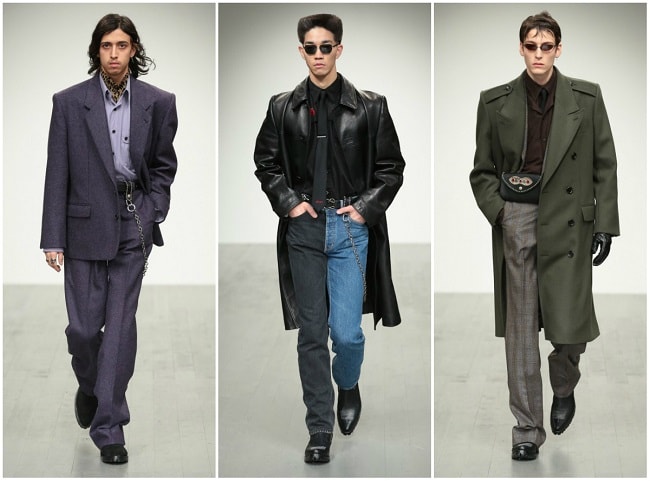 Alex Mullins explored a similar free-spirited versus corporate dichotomy, one representative of the left brain’s logical side and the right’s creativity. The former emerged as similar power suit-inspired silhouettes and boxy coats buttoned off-centre; the latter, also more literally, reflected the ‘90s psychedelic elements, from fragmented digital images reminiscent of the decade’s rave culture, tie-dye patterns borrowing from Grunge, and asymmetrical cutouts seeming like something you would’ve worn out to a New York City club. Moving to the other side of the country, Blood Brother set its sights on the by-chance luck of playing the lottery and gambling in Las Vegas. Although motifs directly referencing the former made their way in through both digital graphics and the presentation’s overarching aesthetic, the Las Vegas Strip’s overt tackiness left more of an impression. Bombers and blazers incorporating a tiger graphic and “Money Bags” text spell that reference out clearly. Less obvious but just as flashy were the bright yellow hues and metallic materials alongside long animal-print fuzzy coats. 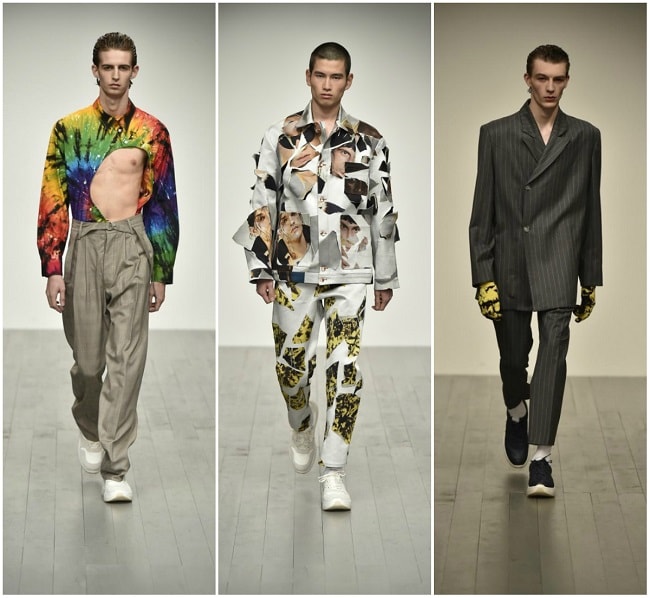 In what seemed more on the nose, Astrid Andersen made no apologies in idolising the American West, adorning models with a combination of cowboy hats and flannel checks. Yet, program notes indicate the collection embodies London’s Buffalo era, and specifically its influence on Astrid’s overall work. In fleshing it out, the designer shifts over toward a ‘90s rave – one represented by track suits, puffer jackets, metallic and organza materials, and oversized sweatshirts. By the end, it’s as if you’re watching a large-scale club party do its own kitschy take on cowboy culture.

If there’s any undercurrent running through this year’s London Fashion Week Men's, it’s this: Your collection needs to stand for something. Nostalgia, in varying forms, connected multiple traditional presentations, but a few designers took liberties in this regard. Case in point: Vivienne Westwood’s nearly three-minute film involving a European Union flag, sandbags, and models in her AW18 collection, all to illustrate a theme of war. While we’re, to a certain degree, used to seeing several heavy-handed political themes – last year’s Balenciaga show comes to mind – Westwood keeps the references slight. Tartan prints, camouflage, and tweed hint at both past and present military uniforms, while unisex silhouettes – designed, supposedly, for practicality – and materials and patterns applied across men’s and women’s garments imply a truce – or, at least, some degree of unity. 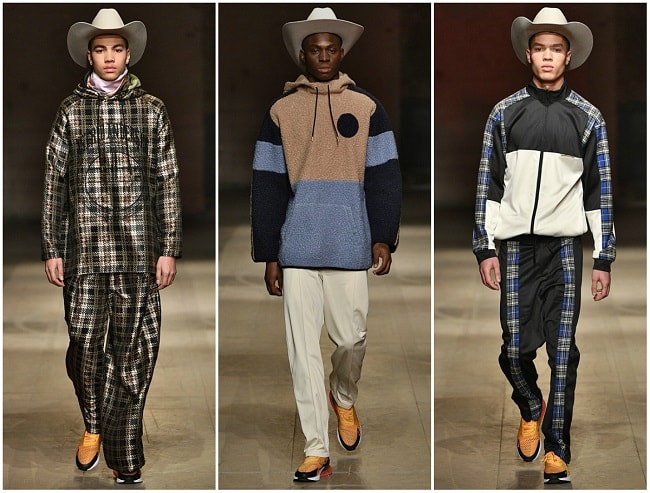 Charles Jeffrey, by contrast, blended his own personal narrative – of coming out gay and subsequent bullying – with the history of his native Scotland, comparing both to a “sleeping volcano of residual anger that need[s] to erupt with a raging energy.” Thus, setting the tone for the Charles Jeffrey LOVERBOY show; the Theo Adams Company opened the event with paint-covered performers acting (and screaming) out this theme. Through plaid prints and club kid-influenced unisex silhouettes, the 2017 Emerging Menswear Designer of the Year’s seemingly oil-and-water concept gelled together through voluminous, balloon-like shapes, 3D textures, cut-up fabrics, and splatter paint prints reminiscent of a Jackson Pollock painting. Continuing to blur the boundaries between the masculine and the feminine, Jeffrey trotted out tank tops and dresses on male models and distorted, if not destroyed, traditional menswear pieces, including long trench coats and ‘90s-esque suits. Added to all this was the occasional fantastic element, emerging through geometric wing-shaped adornments and horn-like or block-shaped head pieces. 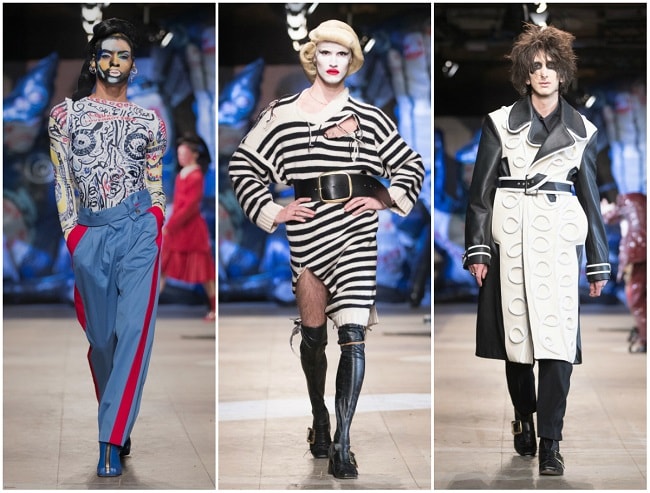 When athletic-influenced pieces get presented on the catwalk, it’s rare that an actual active theme emerges. Rather, over the past few years, streetwear’s and post-Soviet’s appropriation of sweatshirts and track pants emphasise how well these garments originally designed for running and training work for casualwear. Cottweiler’s team seemed to notice this, too, and in a collection based upon breaking into London’s Natural History Museum, the design house went beyond the track and court to – of all places – the crag and trails. The pieces – wide-cut shorts, slimmer pants, and sweatshirts, many with a metallic geode-like print – could pass for both activewear and athleisure, but how they’re styled plays up the former. Models walked along the runway with traditional climbing gear – helmets and a harness, specifically – looking as if they were getting ready to send a route. On the other hand, materials, including a mohair beanie, nylon, and merino wool, all allude to modern-day hiking attire: tough but lightweight, and soft but warmth retaining. 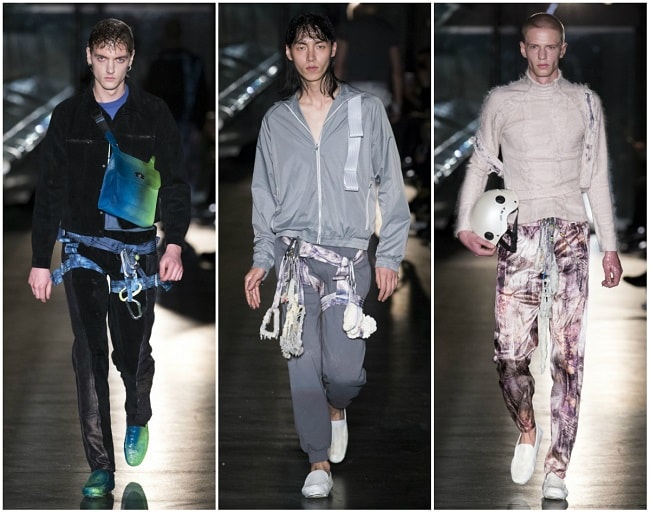 Liam Hodges, crafting a comprehensive ode to the ‘90s this time around, looked at sportswear from another perspective: The cultural force, from hip-hop and Grunge through dance music, that this type of apparel has had. Although, in presentation notes, he says the collection embodies “[E]scaping life, going to Noel’s house party and the adventures of kids’ colouring books,” slouchy fits, layered shirts, baggy sweaters, dad shoes, polos, and bumbags, many patterned with psychedelic prints, embody the everyday appropriation of something originally meant for the gym: Yes, you can sweat in it, but it feels just as good when you’re chilling out or having a good time. 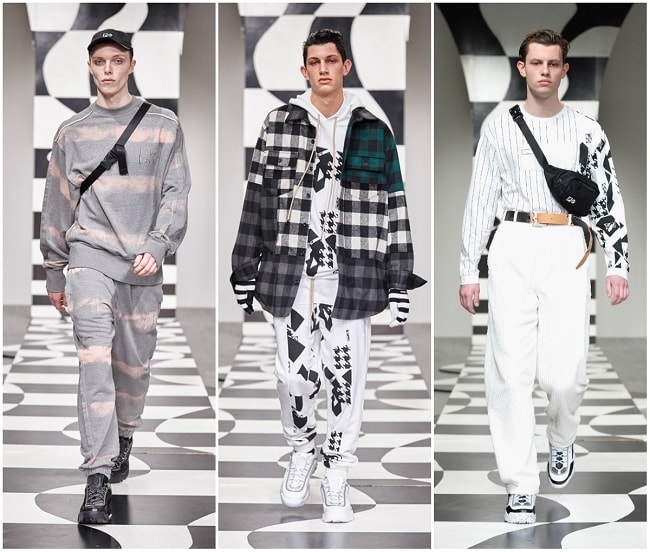