5 REASONS YOU NEED A TRACK JACKET 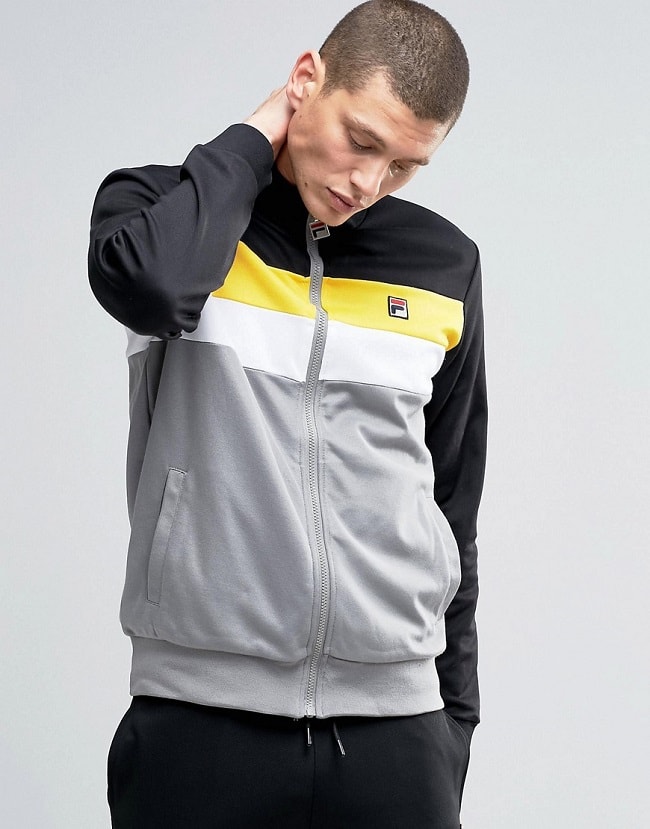 Of all the fashion-leaning outer garments you’ve got in your wardrobe, a track jacket likely isn’t amongst them. Perhaps, if you’re more athletically inclined, you sport a classic and practical piece from Adidas, but otherwise, bombers and hoodies have, at least for the past decade, eclipsed it. However, starting with designers’ previous AW16 presentations, its zippered, high-collared silhouette started making an appearance, most notably at Burberry’s LCM show, although Christopher Kane and Coach introduced their own versions around this time. Since that point, more designers, especially those going for a streetwear or athleisure-leaning character, have introduced their take on the activewear staple.

On one hand, the track jacket’s re-introduction coincided with greater market demand. Per Edited.com, track suit sales soared three months before the Summer Olympics – a 50% increase over the same period the year before – while track jackets similarly saw a 45% jump. On another, the reinvented track jacket – colour-blocked and more luxurious – feeds menswear’s collective interest in brighter colours, streetwear, and retro sportswear, representing a confluence of all three. As such, consider these reasons for adding a track jacket to your SS18 wardrobe: 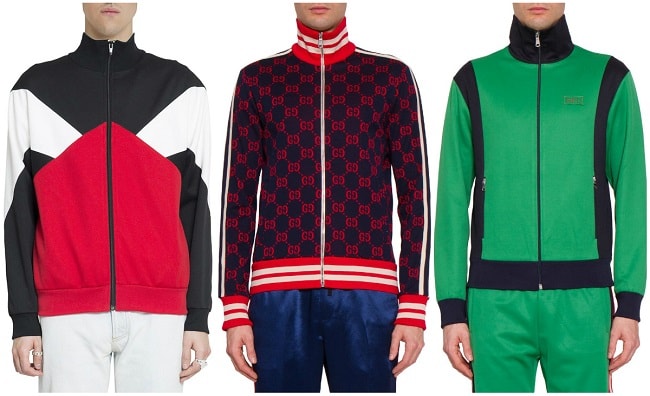 We’ve been living through a period in which athleisure and sports luxe blend statement-making attributes with without-a-care comfort. Contrast that with the late ‘90s and aughties, when sportswear – and particularly tracksuits – represented something else: You couldn’t – or had no interest in – getting a job. In the UK, this aesthetic became intertwined with Chav culture – especially when paired with a knockoff Burberry check print. In the US, similarly cheap materials became the template for garish colours and large logos. Yet, collections from Burberry and Gucci indicate the track jacket is no longer a medium for faux-luxury. Rather, materials and patterns drastically upgrade it to a true status symbol. Thus, stretchy, knit polyester gets replaced with velvet, lightweight cotton or jersey, or iridescent, metallic fabrics, frequently colour-blocked, structured, embroidered, or with a print thrown in. Essentially, it’s turned into the souvenir jacket’s athletically inclined cousin. 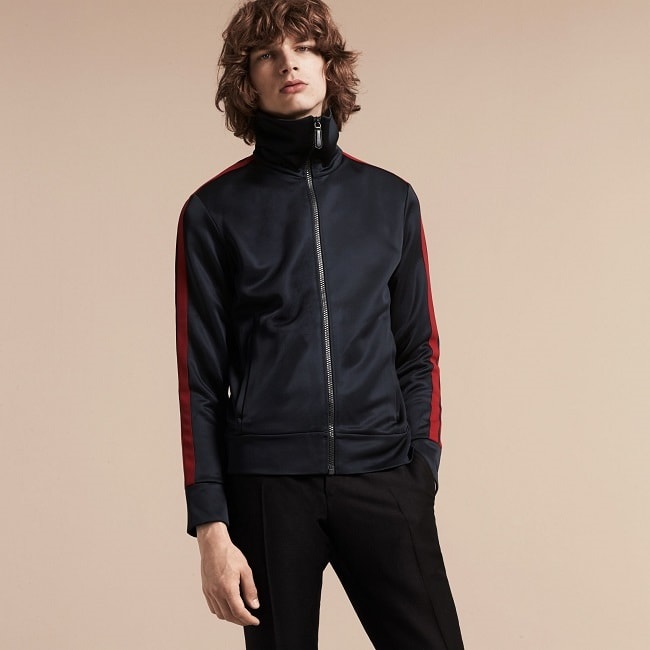 Activewear Running shoes made of mesh occasionally make us pine for athletic gear with some substance. Maybe you had to work harder to reach that faster time, but that’s kind of the point. As such, when Balenciaga started doing its own take on Champion sweatshirts and ‘80s athletic trainers, it got us thinking: Decades ago, didn’t track jackets used to be this cool? Rewinding past sportswear’s early ‘00s nadir, track jackets found their pop culture stride in late ‘80s hip-hop and by the mid-‘90s, as a symbol of Britpop’s working-class origins. Prior to that, you’d regularly spot athletes – and Olympians, nonetheless – unironically sporting them as a practical garment with a secondary side of style. In a sense, post-Soviet’s innate obsession for retro, sportswear-influenced streetwear further fuelled its comeback. While once a status symbol purely because of its rarity and association with Western culture, the track jacket is now a retooled staple of Gosha Rubchinskiy’s eponymous line. 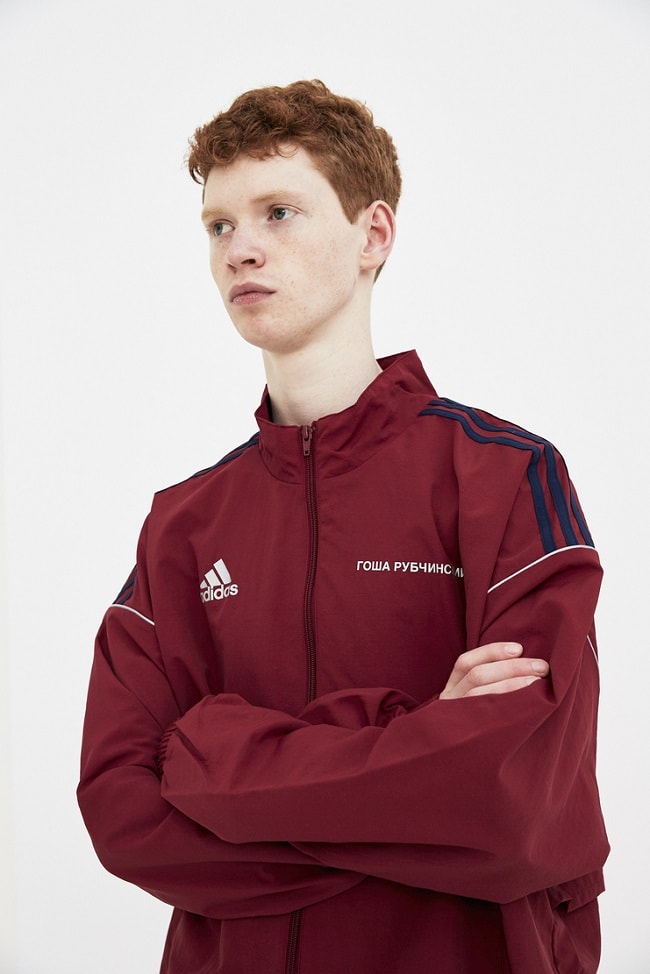 Updated designs stray far away from the Adidas template: That is, a solid-colour body with a stripe or two down the sleeves, perhaps complemented with a logo on the chest. Rather, in line with traditional activewear combinations, those stripes might cut across part of the chest, sleeves appear segmented, and the collar, hem, and cuffs stand out with a contrasting hue. Adidas has already gone in this direction with its Team Issue series, while Gucci and Gosha Rubchinskiy up the ante on colour saturation. As such, not only are there contrasts, but they’re between strikingly disparate pairings that seem almost intentionally garish.

The New Way to Layer

Quarter-zip over a T-shirt, with a puffer on top? You can do better than that. For one, a track jacket mimics the same high-neck silhouette; only, here, you get a convenient full-zip front. The result blends the versatile pullover’s coverage with the convenience of a bomber, all while its colour and pattern combinations turn it into an attention-getting midlayer, especially when you wear it underneath a topcoat, trench, or pilot jacket. But, why stop there? Burberry’s said presentation showed us that it’s perfectly acceptable to layer a track jacket under a fur coat – provided you’ve got the right degree of collar overlap. 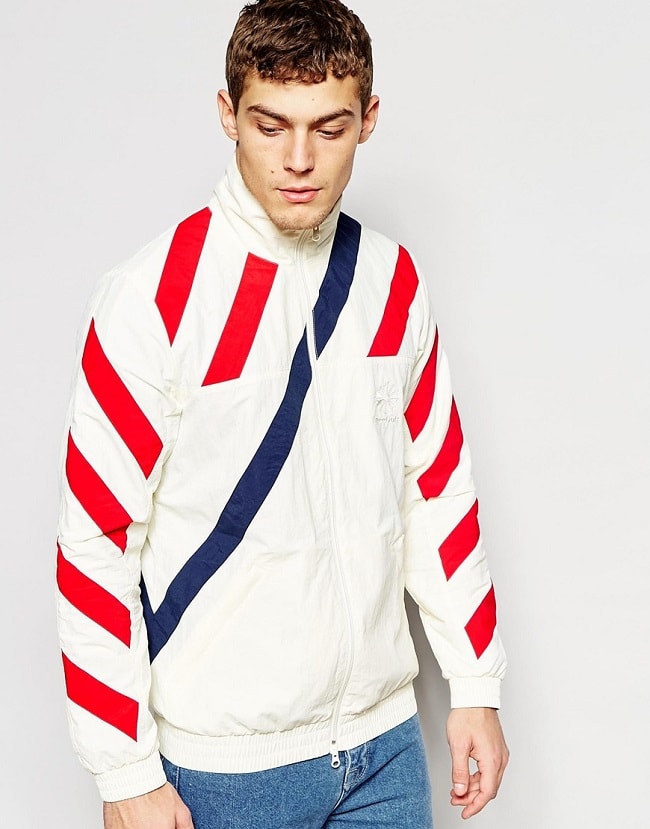 During these current colder months, an extra layer fits into your fitness routine – whether you’re starting up after a winter dry spell or continuing last year’s progress. In either case, that track jacket better do something, and with several current styles, dual functionality – athleisure that actually suits your athletic pursuits – prepares you for the gym, field, or track. Specifically, stretchy poly blend materials match your range of motion, moisture-wicking, quick-drying properties keep the garment from getting soaked through with sweat, and mesh panelling acts as a pathway for better ventilation. For more transitional pieces, lightweight, ultra-soft fleece lining doesn’t quite function as a full-on extra layer but still works to hold onto some body heat – a key feature whenever you’re taking your routine outdoors.