HOW MEN SHOULD WEAR LINEN FOR SS18

LINEN GIVES YOU A WARM-WEATHER COMPROMISE 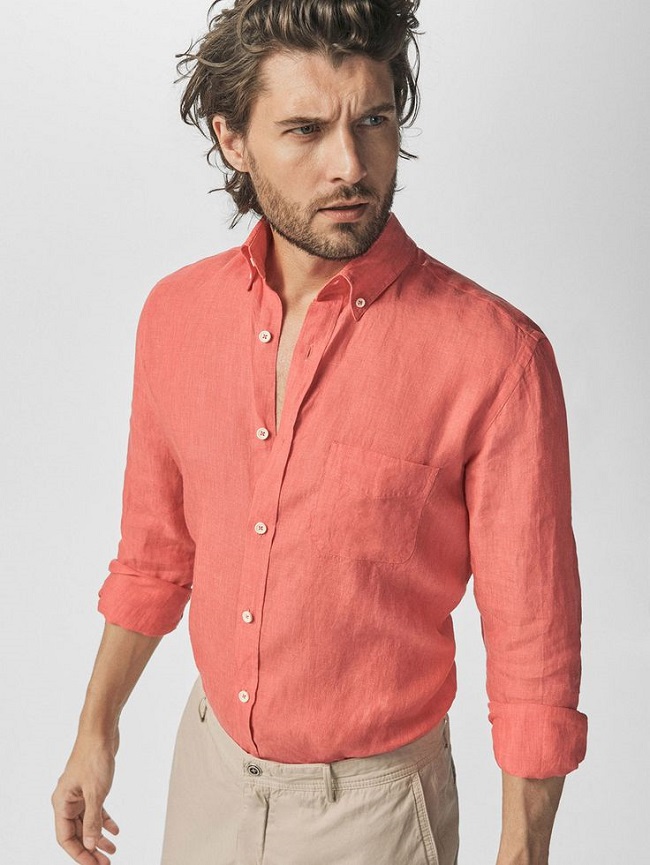 2018 might be the year gauche fashion choices become acceptable. Bum bags? Why not! Neon? Already doing it. Linen? The touristy dad look is now somewhat back in vogue. Unlike with jeans, caps, and chunky trainers, though, streetwear’s winking halo doesn’t surround linen’s return. Rather, menswear as a whole is undergoing a shift: Away from skinny and toward relaxed yet boxy and tailored. And, with wider-legged trousers, camp collar shirts, and unstructured blazers all here to stay for at least a season or two, linen gives you that warm-weather compromise: lightweight and breathable, with a cottony look that comes with a high price tag. In the process, you look like you’ve been vacationing in Miami or the Mediterranean for the past week.

But, on one hand, that’s how linen’s gotten its controversial reputation. Until SS18 presentations gave us an updated variation, the material has long been associated with frumpy cruise clothing, down to its neutral hues, spaciously unattractive fits, and dated reputation. On the other, linen’s a luxury material with some practicality. Just like how merino wool keeps you warm and controls moisture throughout winter, linen does the opposite throughout summer: It lets your skin breathe, all while giving you coverage and classic style far beyond your average tank top. 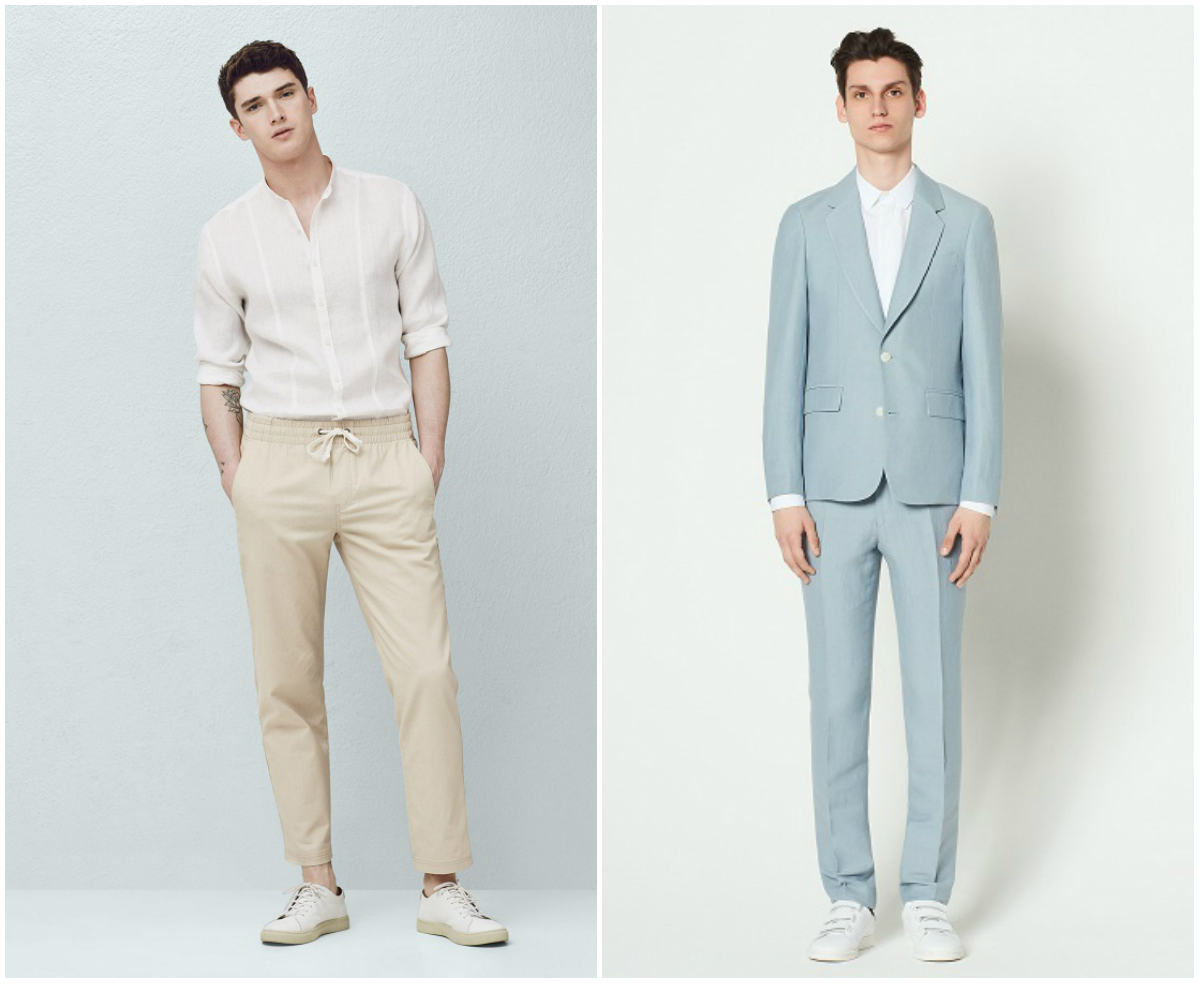 This dichotomy is likely one of the reasons linen has been around for centuries. Archaeologists found that ancient Egyptians based an industry around this material, as far back as 4,000 years ago, and while the Phoenicians helped spread the practice around Europe, Northern Ireland turned into the epicentre during the Victorian era. But, up to this point, the fabric primarily existed as a textile. By the early 20th century, however, tailors adapted the lounge suit – typically made out of tweed or flannel – for warmer temperatures with linen, thus allowing men to wear this dapper staple throughout the year. Post-World War II, linen became synonymous with the summertime casual suit: A vacation essential, when your family had time to travel, and a way to handle sweltering office environments through September. 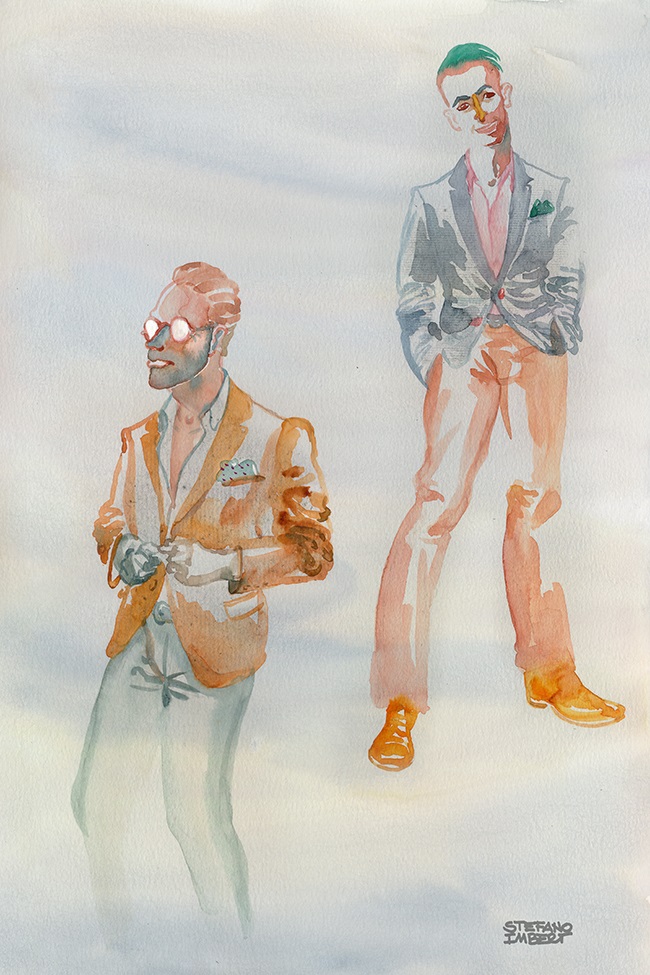 What makes linen particularly ideal in these scenarios? For starters, compared to cotton, it has a significantly lower thread count, and coupled with this, it absorbs moisture without any special treatments. As well, its low elasticity and hypoallergenic nature pretty much mean it not only lasts, but also improves with time. Specifically, even after several washes, it gets smoother, shinier, and silkier, even three to five years down the line, while cotton, through repeat abrasion, clearly starts to show its wear. With these various practical aspects, there are the aesthetic ones, too. Its naturally irregular composition gives it that woven, occasionally rumpled textured character that, while not too in-your-face, can still be seen at a distance. Yet, for men wearing linen for the first time, this last point can seem like a drawback: Why wear a high-end fabric that makes you look like you’re living in old, unwashed clothes? So, if linen seems a bit intimidating at a glance, consider the following points: 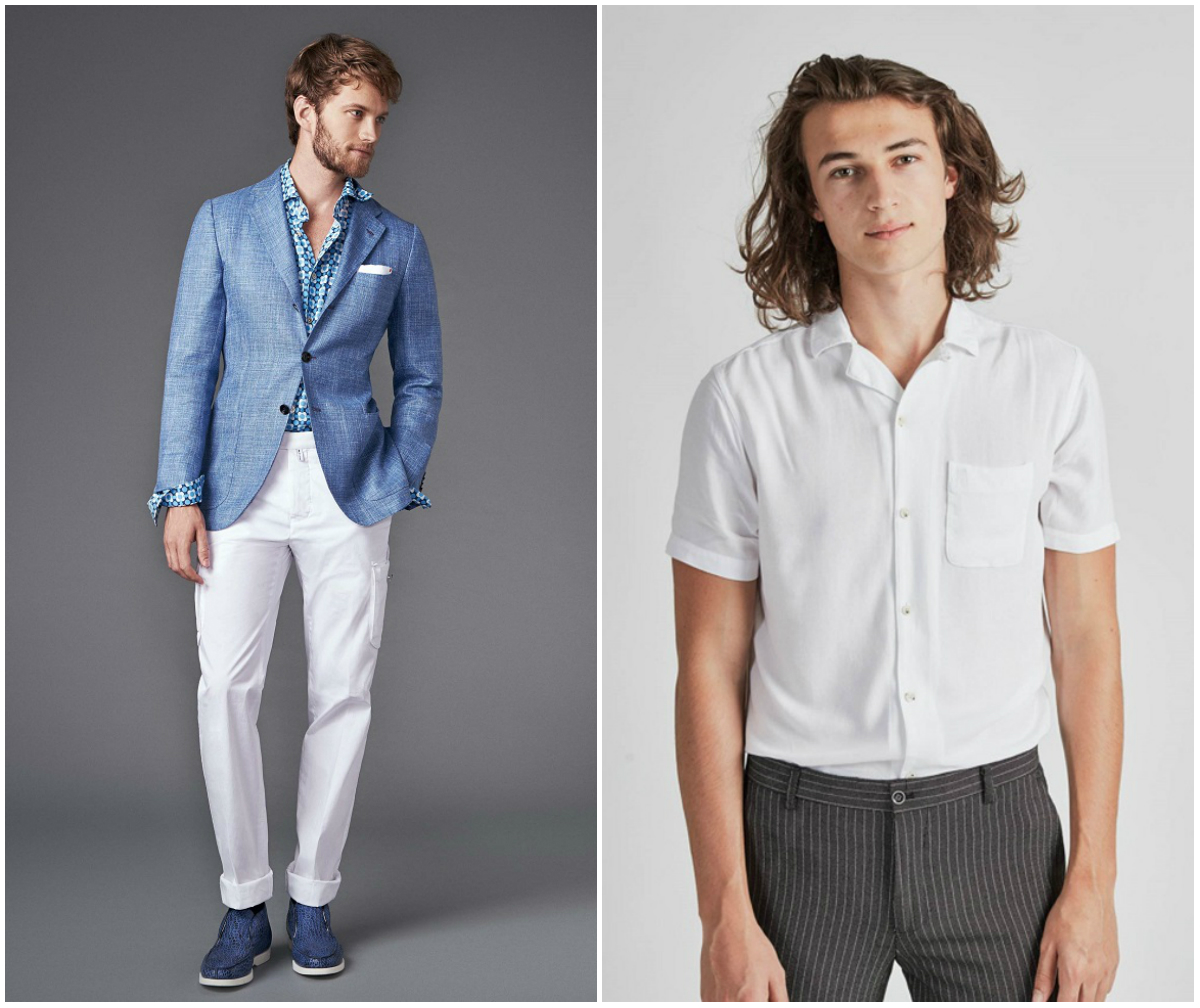 For a Suit or Blazer

Let’s begin with tradition: The linen suit or blazer. Although SS18 collections have revived it, its multi-decade presence, even through several silhouettes, indicates that no other material truly does stylish and cool as well. But, whether you’re on vacation or in the office, cut and colour elevate it from an unstructured, neutral ensemble into suiting on par with the standards. To begin, avoid anything billowy or loose; such a wide fit coupled with the fabric’s natural texture gives off a potato sack-like character. Rather, while you don’t have to keep it slim, structured and tailored is the way to go: Trousers that fit right at the waist, with no pleats, and a straight, if not moderately tapered leg, and a single-vented, trim-cut jacket with defined shoulders. From here, think about colours. Neutrals, like tan and light brown, mark a solid, if not basic, start. Darker shades – navy and chocolate brown – bring out the woven texture just a bit more and tend to camouflage those inevitable wrinkles after you’ve been sitting down. For a more on-trend take, further consider muted pastels, like pale pink or even light blue. What to avoid? White embodies a vacation cliché, and not to mention, it highlights every single wrinkle. Anything bold or bright – think turquoise to primary shades – also gives the material a jarring quality. As far as handling those wrinkles – more obvious with a suit – you’ve got two choices. One, blended fabrics – linen with cotton, polyester, or silk, for instance – crease less, although the mixed fibers do make the material less breathable. Two, as trousers show the wrinkles more, opt for a linen blazer alone and coordinate it with cotton-based flat-fronts or chinos, depending upon the occasion. 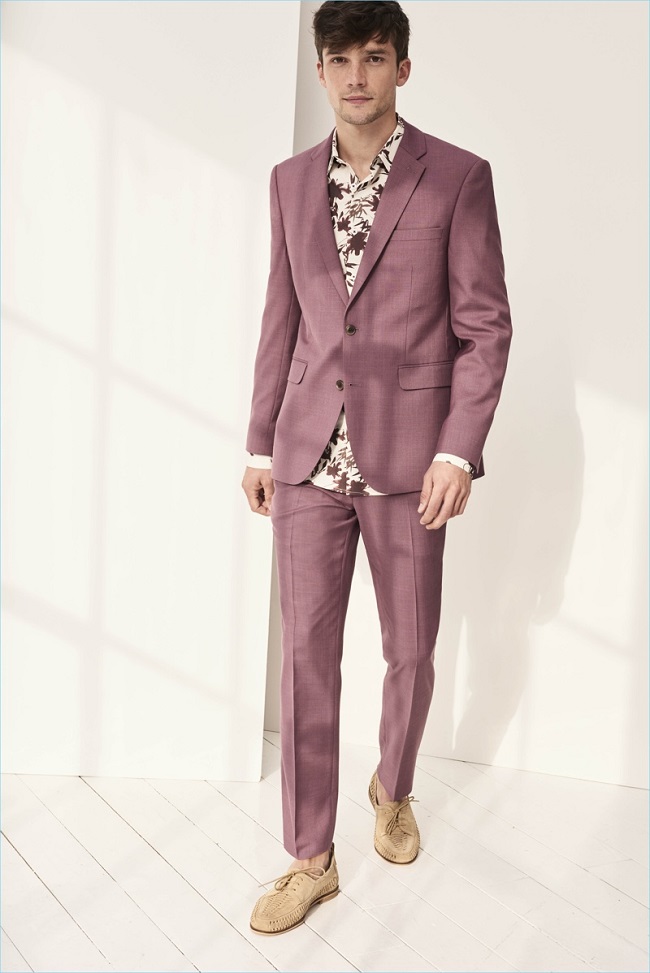 Like suits, linen shirts have been around for quite some time, primarily as the guayabera. Worn usually in equatorial climates, the garment blends linen’s list of practical properties with a wide-cut silhouette similar to a camp-collar shirt. As the major difference, guayaberas have a higher, structured collar, and as such, you generally unbutton it at the top. While the guayabera makes a traditional place to start, linen is essentially a more luxurious upgrade to chambray. Both stand out with a similar woven texture and lightweight feel, but linen has a somewhat stiffer quality, thus making the garment more appropriate for formal occasions during the summer months. With these two silhouettes, adapt the rules used for suiting: Avoid white, consider pastels to darker shades, and opt for more structured shapes over looser cuts. 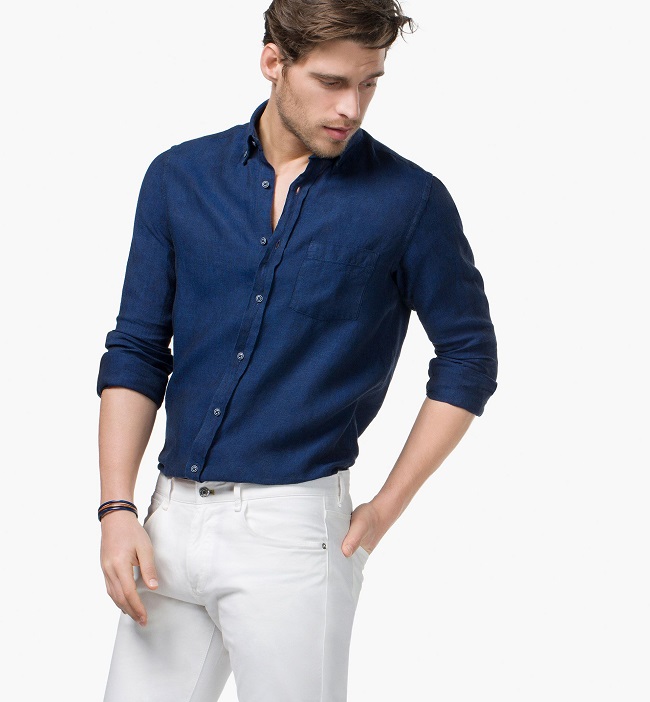 Generally, incorporating linen into your overall look is all about contrasts. As with any textured material, keep it front and centre. Thus, colour wise, if you’re wearing a neutral or pastel, your shirt, shoes, and any accessories should be darker – brown and grey to charcoal. If you’re trying out navy, go in the opposite direction: Cream, white, or even subtle pastels to round everything out. Fabrics, too, fall under the same umbrella of rules. Change things up with cotton, silk, or another light, woven blended material. Never wear head-to-toe linen, however, even with a suit: You’ll end up with a monochrome-like effect that simultaneously makes it seem like you’re trying too hard and don’t have an original thought in your head. Rather, to make its inclusion appear less forced, play it off materials, like cotton, rayon, or silk, that let its texture become the primary focal point. 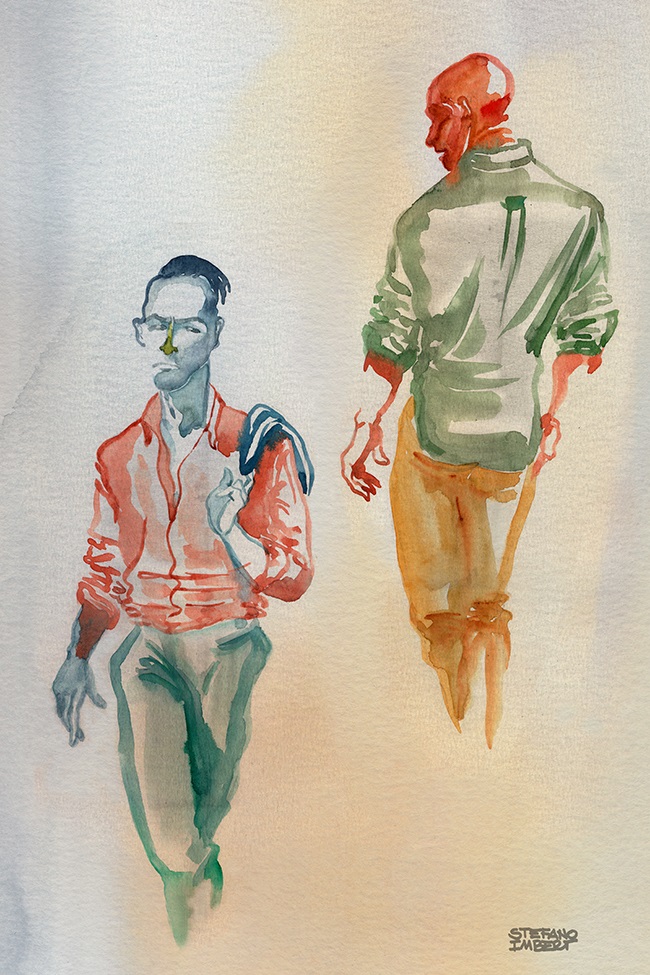