HOW VANS BECAME THE MOST ICONIC SHOE ON THE PLANET 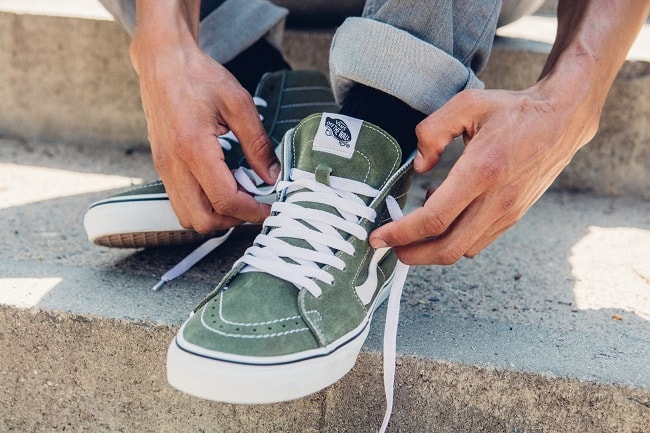 First launched in Anaheim, Cali 1966, The Paul Van Doren Rubber Company had little knowledge that they would quickly become one of the worlds favourite shoe companies and in doing so created one of, if not the most iconic shoe of all time, the Vans Old Skool. Working as an executive at one of Americas largest shoe companies Paul noticed that there was serious money to be made seeing as the retailers took home the majority of sales whilst manufacturers were barely covering the costs of their product.

So, he set up his own company in which he made and sold his own shoe. His employees built the factory from the ground up and their efforts were awarded with 17 people coming in and placing an order on opening day. Within hours they were able to turn out the product but when the customers came to collect the shoe, Vans realised they had no money to give as change, so they had to ask their customers to return the next day with the correct amount of cash and sure enough they made their first few sales. 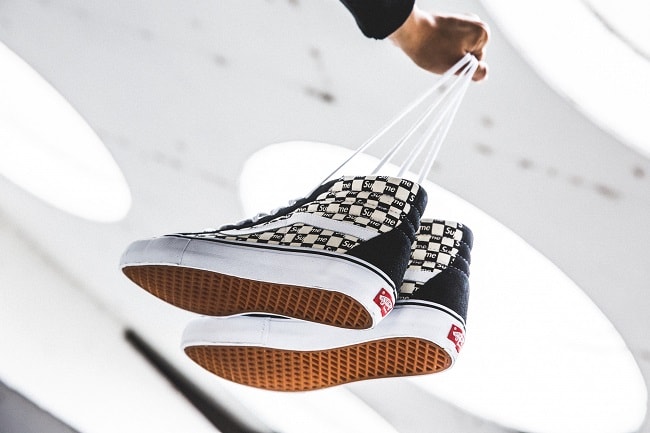 Slowly but surely the company started to gain traction. With Doren striving to make the best shoe possible, he made the soles twice as thick with the upper made from duck canvas, making them one of the strongest shoes money could buy. The idea behind this was to ensure the shoe didn’t wear as quick over time. Of course, this made the shoe a staple amongst surfers for its grip and toughness, so when these surfers turned to surfing tarmac instead of waves, every skater on the east coast was wearing Vans, of which they customized, giving birth to the checkerboard and Old Skool. From this Doren decided to sponsor the best skaters he could find (who were mostly teenagers) and give them free shoes and as the skate scene began to grow in America so did the shoe itself. 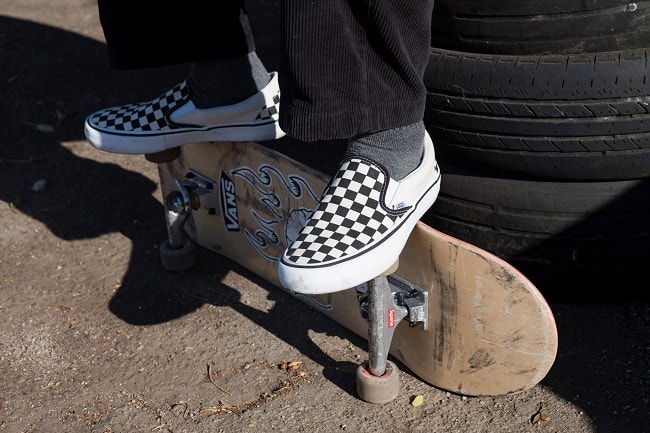 The real turning point for Vans came in 1982 as a representative from Universal came to Vans asking for a pair of checkerboard shoes for a movie involving an East Coast teen skater, Fast Times at Ridgemont High. The film helped propel Vans into a nationwide phenomenon. The Vans Old Skool debuted in 1977 and was an instant hit showcasing the iconic side stripe along both sides of the upper. It was Vans’ very first skate shoe that fused leather panels and a wax sole leading to an increase in endurance and comfort. It started off as just a doodle by Doren, which he referred to as the “Jazz Stripe” but soon became the hallmark of the company and is now displayed on the Logo. 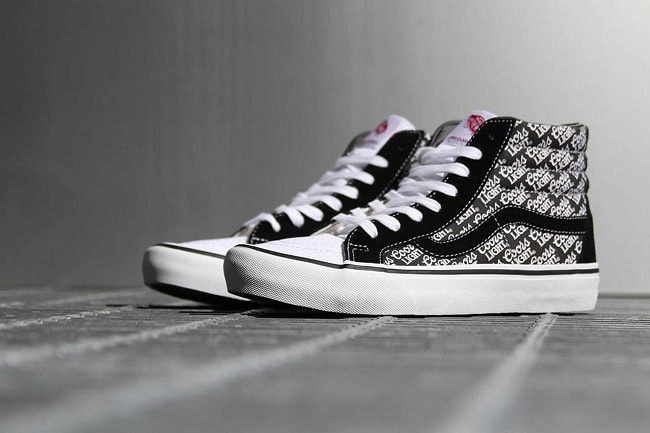 During the 80s, customisation of shoes became a craze, with Nike releasing the Air Max and running shoes general rise in pop culture - a period driven by the quest for individuality. Speaking about the Old Skool during the 80s, the son and owner of Vans Steve Van Doren stated, “people realized the possibilities of the simple idea of pulling a pen out and creating your own unique footwear work of art. Vans' Old Skool style offered the particular perk of many panels and material parts that could be tweaked to anybody's liking.” The brand can be credited as laying the foundation for the customisation feature adopted by every major shoe brand in modern society today. Over the course of its lifetime the Old Skool has displayed a countless show of colours, patterns and original takes of the shoe, helping cement itself as the king of shoes. Infinitely different yet instantly recognisable. 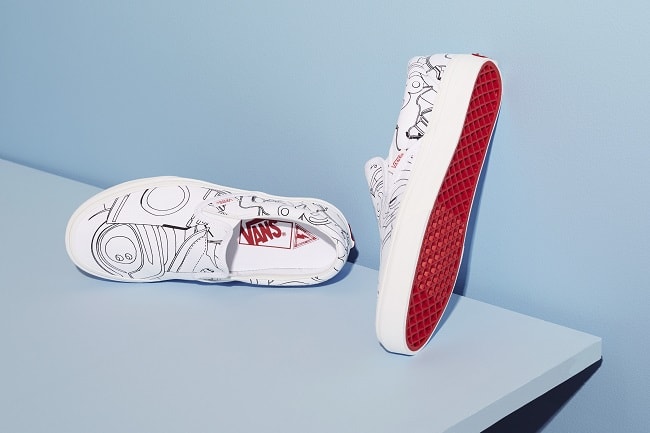 Collaborations in fashion can prove to be a major step for a company. In the case of Vans their collaboration with Marc Jacobs, Supreme and Coors Light Beer (yes beer, but they do look rather sick). The Marc Jacobs collab allowed Vans to work on shoes with some premium material and state of the art technology at the time, whilst only producing the shoe in short and limited runs drove up demand like crazy and turned them into one of the first exclusive mainstream sneakers before Michael Joran decided to do the same. Meanwhile, the Supreme collab marked the beginning of an era that would see countless shoes being produced with hundreds of different styles and a brand image amongst skaters and street culture alike that would last to this day. James Jebbia, Supreme founder states "The Old Skool is iconic, classic skate. In 1996, it was one of the best shoes offered by Vans and really stood the test of time.” 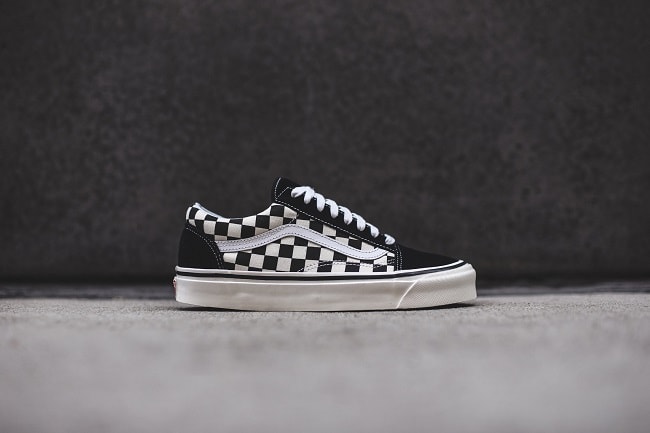 By the ‘00s Vans had grown into a $300 million company as they were sold to VF Corp who promised that Vans could still operate independently as long as they went global. With this change Vans moved away from just producing footwear and instead looked to establish their name amongst the 4 pillars; music, action sport, street culture and art. The change saw the Old Skool worn by some of the biggest names in the music scene with artists such as Henry Rollins performing on smaller stages and crowd surfing teens following his rise to the top. Vans developed a musical shoe programme that evolved from small independent gigs into worldwide festivals with fashion styles dictated by genres. With their name plastered in every action sport possible and worn by stars of the 00s it was an inevitability for Vans to keep on growing. 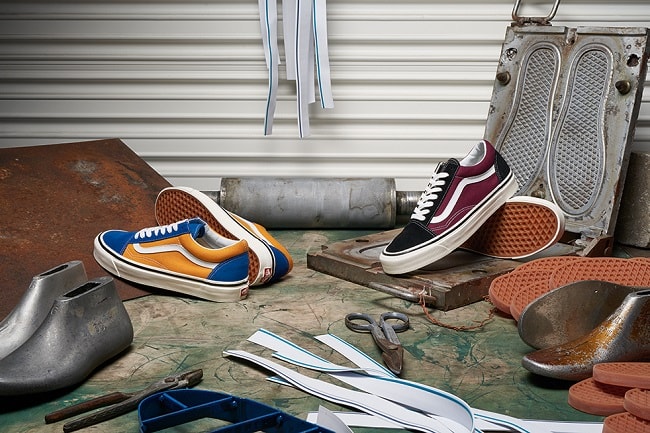 During the ‘10s we’ve seen the shoe reach every corner of pop culture. With some of most popular athletes in the world, not only in action sports, but in football and basketball all sporting the Old Skool. Even the Kardashians are getting in on the hype. A versatile, easy to style, gorgeous, reliable, functional and relatively cheap shoe that’s easy to love and hard to ever leave. FIT fashion professor Elena Romero says Gen Z’s fascination with the old school deck shoes really isn’t all that shocking. “The key to Vans staying relevant is connecting with the generation by understanding their needs and aesthetics.” Moreover, Vans’ rise to the top has seen their market share increase more than 7x over to $2.3 billion since ’04 and "for the first time in years, we’ve seen Nike share moderate as a preferred brand," senior research analyst Erin Murphy said in a statement. "Offsetting this weakness, we’ve seen an unexpected rise in trends like streetwear with Vans and Supreme gaining momentum.”