IN CONVERSATION WITH RICHARD ANDERSON

HERITAGE AND REFINEMENT FOR THE MODERN MAN 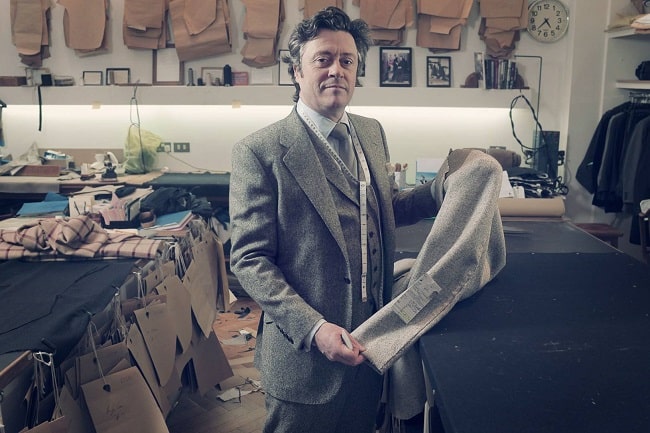 For a recent Menswear Style podcast show we sat down and talked with Bespoke Tailor of 13 Savile Row, Richard Anderson. Richard talks about the current tailoring trends and how he graduated from being one of the youngest cutters to launching his own brand in 2001. We also talk about his new book 'Making the Cut' and his upcoming American trunk show.

What are your earliest memories of working in tailoring?

“I joined Huntsmen in 1982 and I was their youngest Head Cutter in their history by the age of 32. I started a cutting apprenticeship there when I was 17 and I absolutely loved it. It was a completely different world to me, going from a comprehensive school in Watford, to the most established tailors in the West End of London. It was a culture shock, but it was obvious that they were the best. Their eye for detail and level of quality was second-to-none. You had to either sink or swim working in that environment, but I loved the challenge of it.” 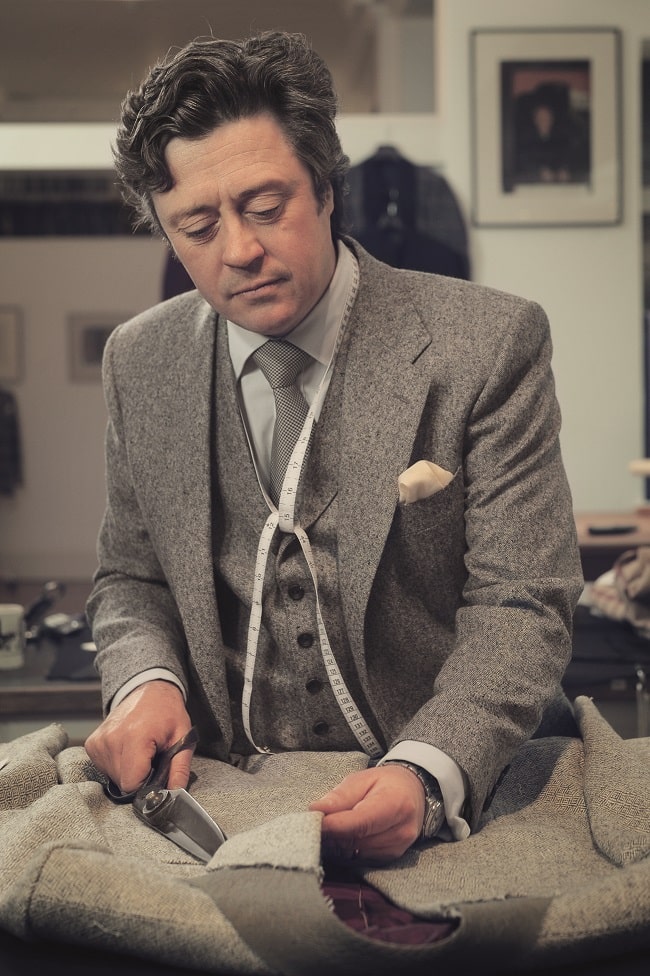 You’re now located at 13 Savile Row, do you still keep in touch?

“Yes, Savile Row is like a village, we all know each other. However, there’s no one still working at Huntsmen from my time there unfortunately. A lot of people would think that a Savile Row suit is the same as another one, but each house has their own unique cut. Each house has its own atmosphere and ambience too.”

What sets you apart and distinguishes you on Savile Row?

“I think its all about the cut. I was taught the very traditional way of cutting. I take 19 measurements when with my clients, but the measurements don’t tell you the full story. It won’t tell you the figuration which is the way the client stands e.g. is one shoulder higher than the other or whether one knee is bowed out more than the other. All these things are taken into consideration and a cutter must then put those two ingredients together, along with his artistic eye and the customers’ personality. We have a very distinctive house style based on a method of cutting known as Thornton System which is a 19th century way of cutting. The balance of the garment one can achieve using this system is fabulous. All these ingredients go into creating a very distinctive silhouette that Richard Anderson are known for.” 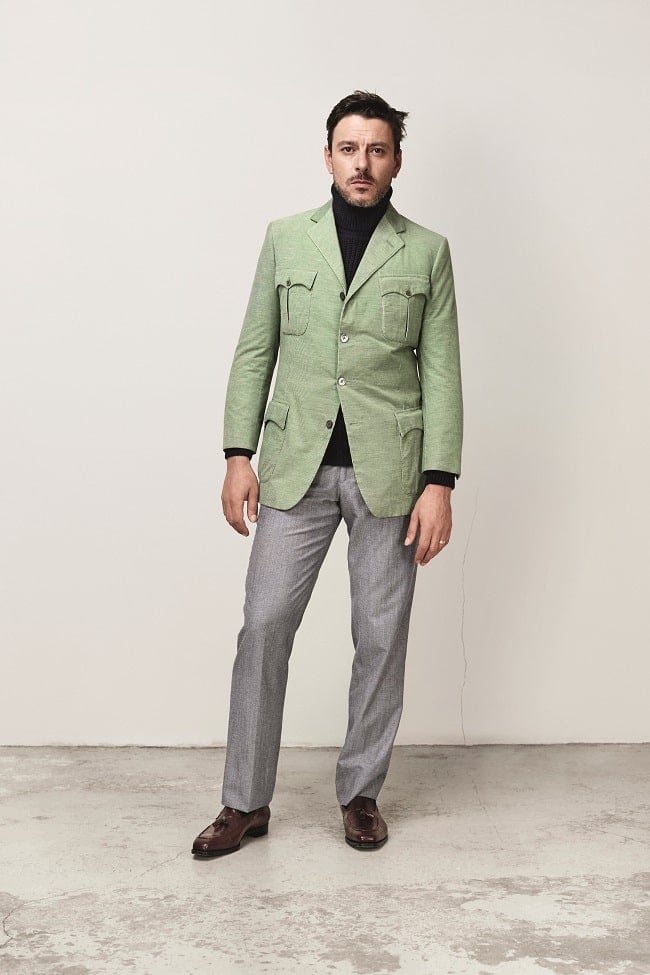 Do you have an apprentice working under you?

“Yes, very much so. On the cutting side there’s a young man that has been with me for 3 years and he’s making good progress. We would hope for him to have his own customers by the end of next year. It’s important to do this because I’m over 50 years old now and my range of customers stretch across a certain age demographic. You need younger cutters to appeal to a younger audience for brand longevity. On the making side we have 2 apprentices who have been with me for 5 and 7 years who are both qualified. It’s important to keep the momentum going, as young people in the last 10 years have really wanted to come onboard and see Savile Row and tailoring as an up-and-coming industry.”

How long did it take to put your book 'Making the Cut' together?

“My first book released in 2008 took 5 years and this one took about 3 years. I wanted to do something different; most of the books on Savile Row were quite dry biographies, so I wanted to make this one informative with a little personality as well. Something not just good to look at but something good to read also. The inspiration for it was 25 iconic looks which were done in a modern take – something you wouldn’t expect of Savile Row – such as Duffle Coats and Bomber jackets. A lot of the talking points for the book came direct from my customers who would be in the shop and would point to something and ask about it. I thought that if it interests them, it would also interest other people.” 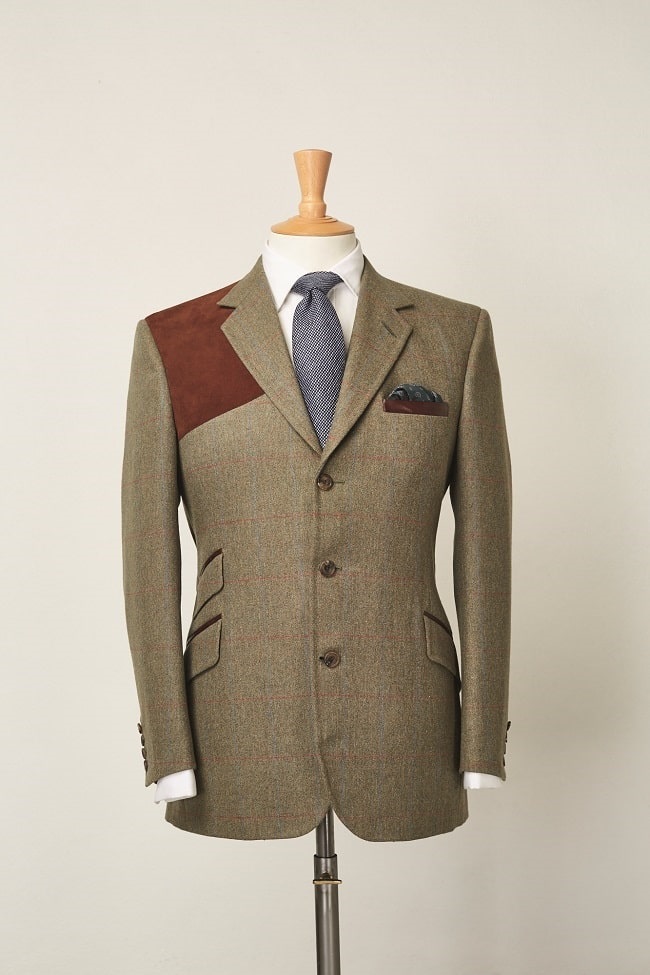 You’re going to America soon on a tour in September?

“Yes, and we do it three times a year; January, May and September. It’s a big part of our business, especially on the East Coast. A lot of the customers that see us will also see us in England as well because a lot of them are travelling business men, which helps with the process of multiple fittings.”

This is a shortened edit of episode 32 of the MenswearStyle Podcast with Bespoke Savile Row Tailor Richard Anderson. You can listen to the full version below or subscribe in iTunes directly. Richard Anderson's US tour begins in New York on the 13th September at The Carlyle hotel.