YOUR GUIDE TO MEN’S BLACK SUITS

WHEN AND HOW TO WEAR THEM 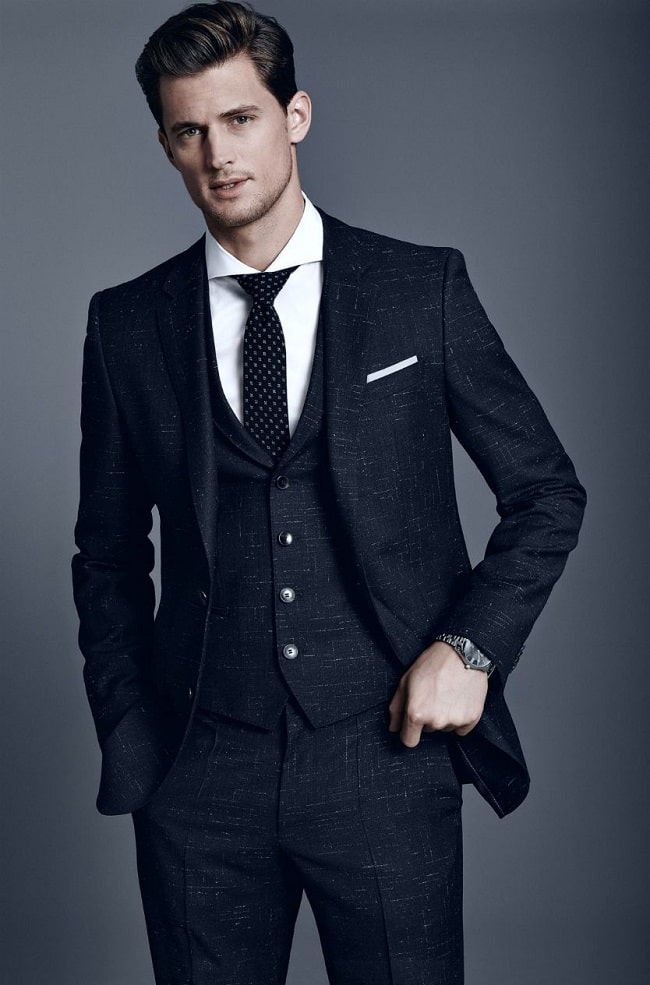 Is there still room for a black suit in your wardrobe? We don’t mean literally, of course. Rather, between the preference for grey, navy, and windowpane checks, the darker hue feels like a product of a bygone era. Or, it’s associated with select instances: Funerals, job interviews, and graduation ceremonies, plus any black-tie occasion. Through this window, wearing a black suit comes with a narrow stream of options: Crisp white dress shirts, a simple tie and polished oxfords or brogues in the same shape. Thus, it reeks of boringness and its perceived mundane character results in also-ran status. But in spite of this, its seeming ease is equally deceptive: Wear the wrong fit, for instance, and suddenly you look like President Trump in a sack-like Brioni number. So, whether you have a dressier occasion coming up or you’re debating about whether you truly need this wardrobe cornerstone, think about the following.

As the fashion truth goes, black makes you look slimmer. Of course, this doesn’t apply in every instance: A skinny, stretchy fit on a larger body will still highlight every flaw and an oversized, baggy cut will envelope your frame to the point you look like a small child playing dress-up. Rather, once you’ve found the ideal cut, the dark colour simply takes off a few pounds while appearing to elongate your frame. Thus, for most body types, seek out clean lines – structured, but not quite boxy, with a single-breasted jacket and straightforward lapels. Now’s not the time to be overtly trendy with a slouchy blazer or wide-cut, cropped trousers. It’s instead, a staple, and its form should reflect that versatility. Beyond just how it looks, there’s a practical reason for this, too. Chances are, when you’re donning this piece, you’ve got to adhere to a strict dress code. Keeping it classic, with minimal embellishments, is the shortest route to meeting the requirements. 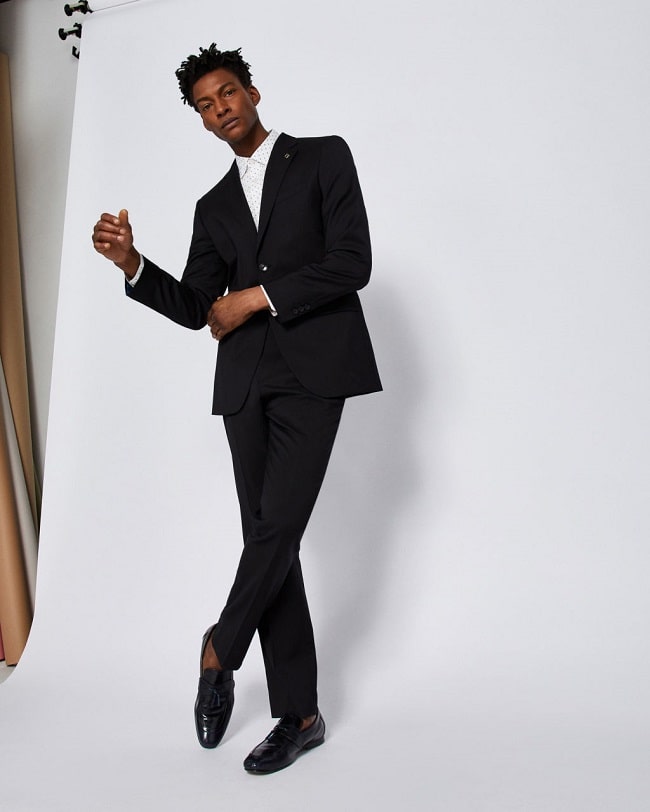 Black is black, right? Just match it with white and you’re done. But, it’s not that easy. As with all suiting, some colours and patterns flatter certain skin tones more than others, and black isn’t exempt. Predictably, the darker hue washes out paler skin tones, ultimately making you look like a member of an early ‘80s post-punk outfit. A solution, in this instance, is examining the fabric’s texture: Something that’s clearly woven or tonally patterned evens out the harshness a monochrome shade brings. As well, for the modern dresser, shirting is equally, if not more, important. Although white, assuming it’s not an eggshell or beige-tinted hue, seems uncomplicated enough, it’s not the default option. Rather, if you’re on the paler side, consider balancing out the suit’s overpowering intensity with a warmer hue: Burgundy, purple, and even pink strike the ideal proportions. If your skin is on the darker side, bolder colours – think bright blue, emerald green, or even a smouldering red – have a similar effect. Prints, too, aren’t off the table. Aside from colours, consider size. Bigger, more detailed designs rival the suit’s almost monolithic stature, and as such, even though it might not seem like it, cohesiveness gets broken apart by two equally strong, forceful elements. Instead, think minimal, both in terms of print size and colour: Whatever you wear should complement, not bulldoze over, your suit. 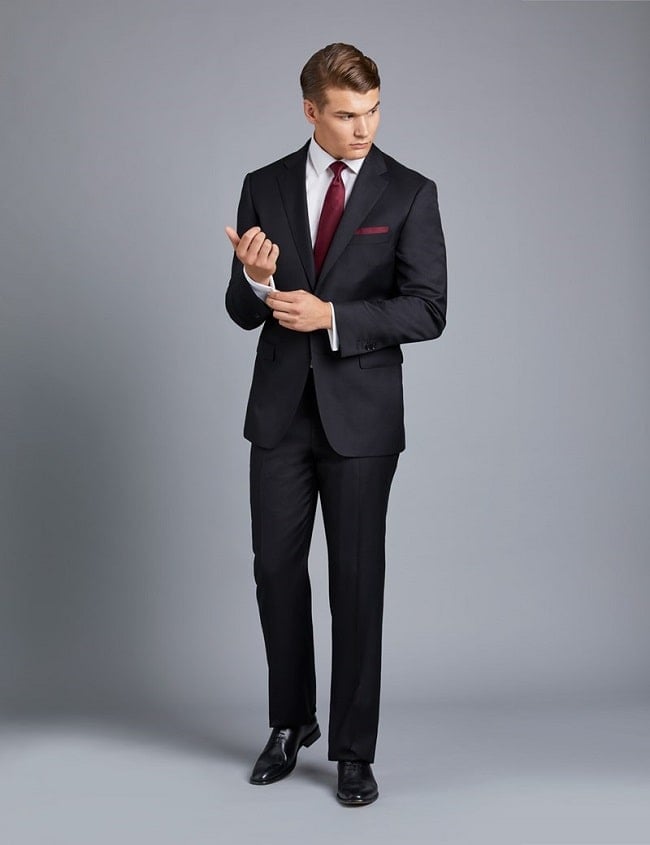 Over the past decade, as suiting itself has made a comeback, the rules surrounding have gotten even more blurred and convoluted. So, formal occasions? Black is fine, but you could do navy. Proms, job interviews and other special occasions? Sure, but you’ve got other colours to choose from. And, when it’s black tie, the answer’s obvious. However, for a night out? It’s an option, but it’s all within the styling.

Through each circumstance, picture your suit as your foundation, and how you build upon it influences its character and adjusts to the occasion. To begin, consider your footwear: Unless you’re dressing for the most informal of situations, keep it tonal, and avoid both brown and navy. As far as the style is concerned, follow basic rules: These occasions call for a standard dress shoe, like a loafer, oxford, or brogue, obviously polished to remove any scuff marks. 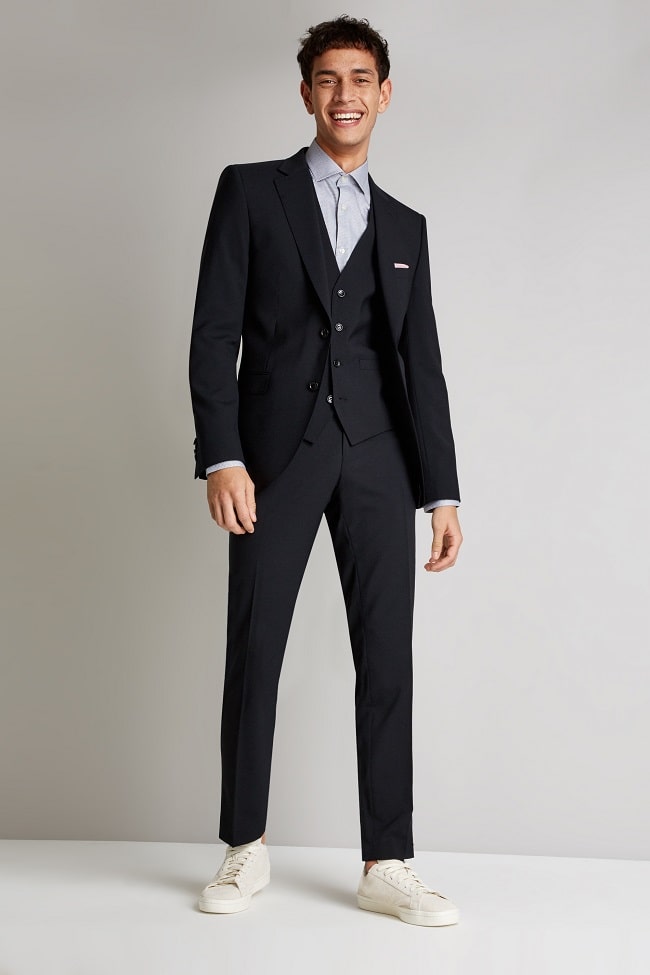 Black suit with a black tie? It’s not a total faux pas, but these days, it brings up images of Men in Black, Agent Smith in The Matrix movies, and frankly, any type of government Secret Service member or bodyguard. Solely for this reason, give your tie some variation: Texture, a light pattern, or even a contrasting colour creates enough difference.

Outside of your foundation, anything like a pocket square or brooch amounts to an embellishment. But, it’s the type of move that transitions your black suit into less formal environments. A pocket square, for instance, enhances it with a splashy pop of colour or print – nothing too strong but enough to draw the eye. A scarf, as we’ve seen from a few ‘70s-esque silhouettes, pushes this up a few notches and throws in a daring, vintage-leaning finish. Don’t discount your metals, either. A watch is a given, with size and detail both proportionally decreasing with the event’s formality. Lapel pins, tie pins, and brooches put the flash up front and centre, and tend to be more appropriate when the dress code is looser. Similarly, your cufflinks, while less visually obtrusive, change with the occasion: Err toward small and metallic when you’ve got to stick with tradition, and try out those skull-shaped or diamond studs when you can let your individuality shine. 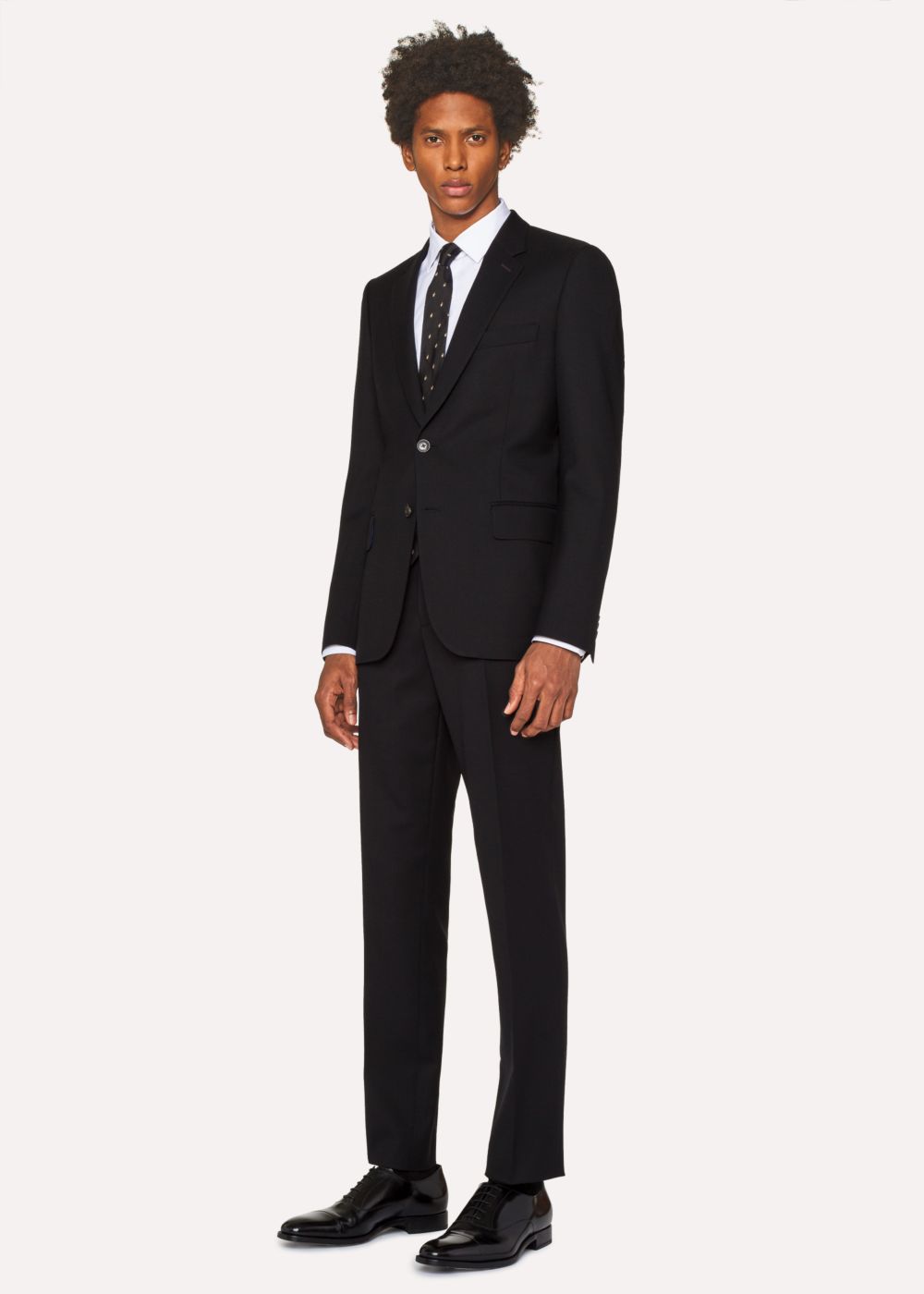 Within Netflix’s Marvel universe, Luke Cage’s Hernan 'Shades' Alvarez is without a doubt the sharpest dresser, even more so than Jessica Jones’ purple-suited, manipulative Kilgrave. What sets the Ray-Ban-wearing nemesis apart? His ability to pull off monochrome black suiting. While Cage himself regularly sports a Carhartt hoodie, Shades’ ultra-smooth, gangster-with-a-sense-of-style getups make it clear that he’s got refined tastes: There’s nothing tacky here, like oversized platinum chains or diamond pendants. Instead, subtle differences between materials break up the monotony, which in turn, symbolises who he is as a character: That guy in the background who’s in charge of everything. You don’t know who he is – a running theme throughout season one – but you soon will. For a more approachable option, consider tonal dressing – a concept, also via Netflix, pushed by Queer Eye’s Tan France. With black, stick within the palette of greys – always lighter but still at a distance from white. As such, you’re experimenting with varying degrees of darkness, without creating any overt contrasts. 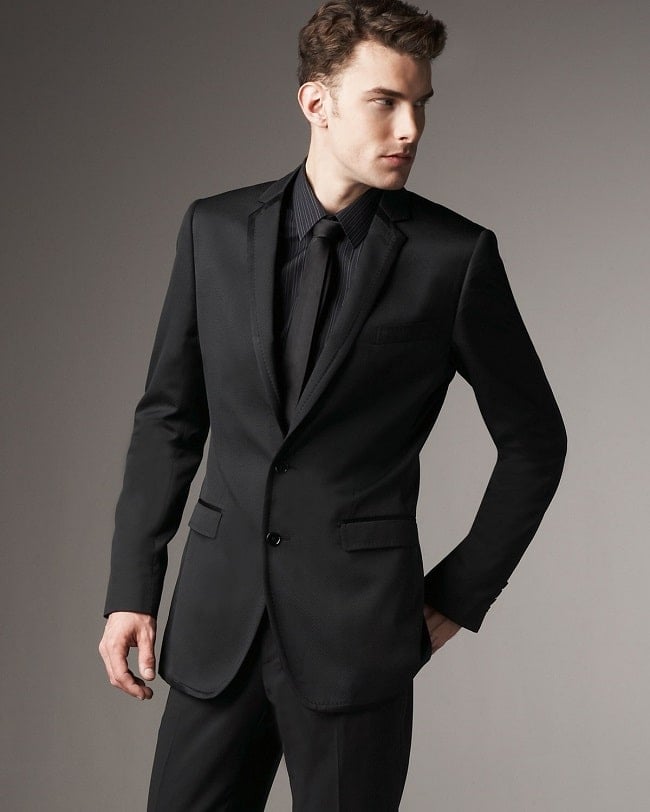 What might best be described as an offshoot of the party suit trend, smart casual suiting takes the formal staple down several notches. It’s easily an everyday piece, even outside of a corporate sales or finance environment. And black, within certain parameters, isn’t excluded. But what’s the key to doing smart casual suiting? In one phrase, avoiding tradition. As such, swap out your traditional button-down for a lighter-weight buttoned shirt (such as chambray) or even something collar-less, like a tee or a roll-neck sweater, depending upon the time of year. With your footwear, avoid the lace-ups and loafers, and instead opt for a Chelsea boot or solid-colour trainers – black to start, or even solid white. The suit itself breaks free from decades’-long constraints. Keep it all-around slim, a la Hedi Slimane’s debut Celine presentation, or attempt something cropped – rolled cuffs and all. With the jacket, an unstructured single-button fit matches the dressy-laidback dichotomy: You’re sharp and sartorially savvy, but not to the point of look-down-your-nose pretentiousness.