HOW DID BUYING A PLAIN T-SHIRT GET SO COMPLICATED?

Written by Ivan Yaskey in Tips & Advice on the 13th July 2019 / How Did Buying a Plain T-Shirt Get So Complicated? 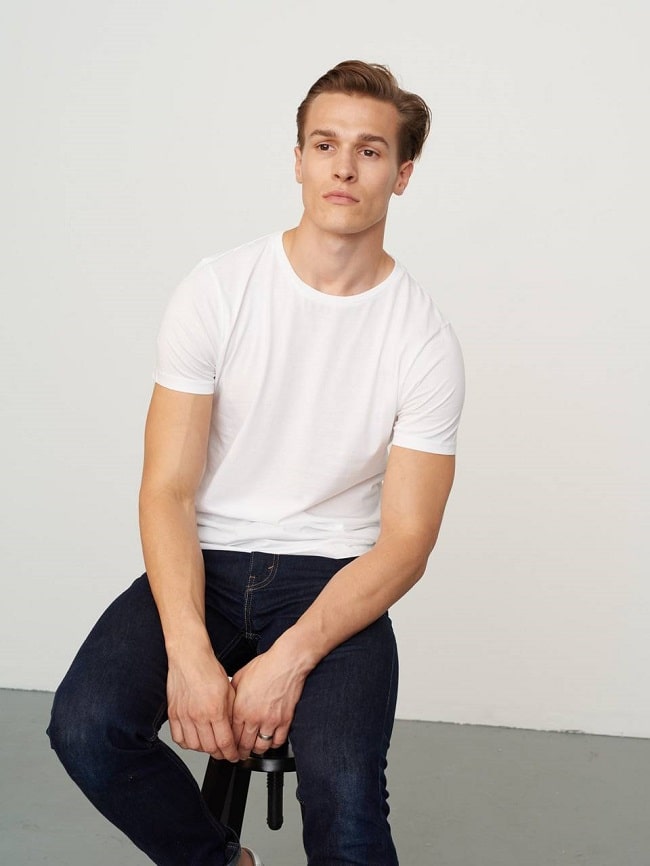 Oh, the plain white T-shirt. Everything about it seems so straightforward and ordinary. Just pop it over, and it plays a comfortable second fiddle to jeans, chinos, or in today’s world, a casual suit. If only it were that simple. Just as the menswear market has exploded over the past decade, so have the options for T-shirts. You no longer stop by the department or drug store for a three-pack, and then wear them both as undershirts and weekend casual garments.

Instead, your choices go far beyond 100% cotton or a poly/cotton blend. A man doesn’t just have to wear a crewneck, and higher-end menswear brands have tried their own spins – whether it’s the ruggedness of Spoke London, the sustainability of The Cotton Story, or the durability and extra properties of a L'Estrange London or A Day's March. Furthermore, you then check out a High Street or streetwear retailer, only to discover a rainbow of colours, shirttail styles, and longer lengths. Where do you go, and what do you do? 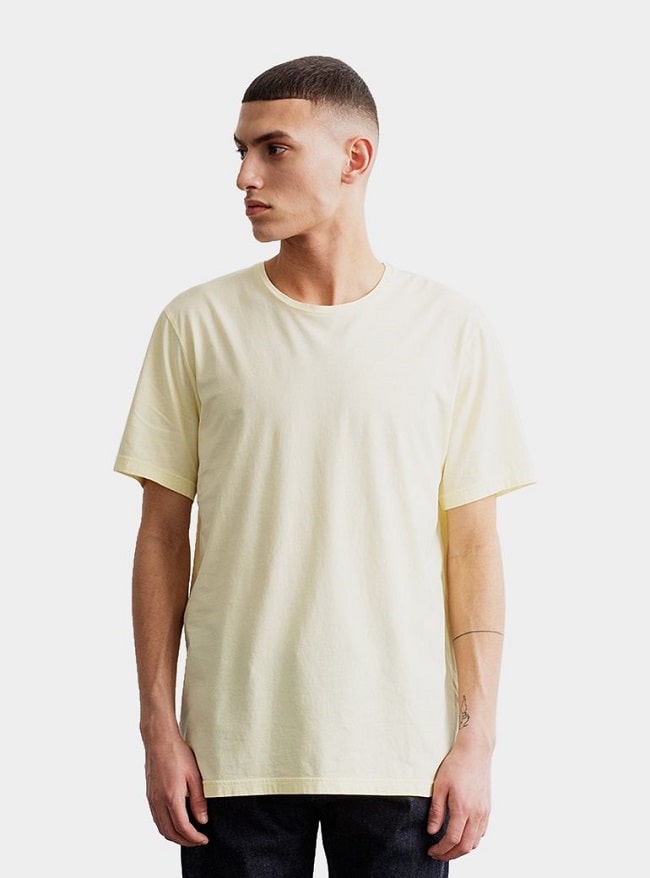 Let’s Start with a Bit of History

These days, the T-shirt is the ultimate casual garment. Nothing comes close – except for maybe denim. It started, however, rather predictably as an undergarment. Much like modern-day base layers, it was worn as part of a union suit to create a barrier between the body and the clothes on top. Manufacturers initially used silk to absorb perspiration. Eventually, cotton superseded it, as its breathability made it ideal for labourers and military members to wear under their clothes while they worked. The union suit silhouette, too, dropped out, and with time, men just wore the T-shirts with trousers. It wasn’t until the mid-20th century that the T-shirt shook off its history as an undergarment. At that point in time, it made for efficient play clothes for boys, and offered adults a comfortable alternative away from the office. Throughout the ‘50s and ‘60s, James Dean and Marlon Brando gave the garment a cool, rebellious character – it was for the edgy, adventurous adult and broke away from social and work dress codes. 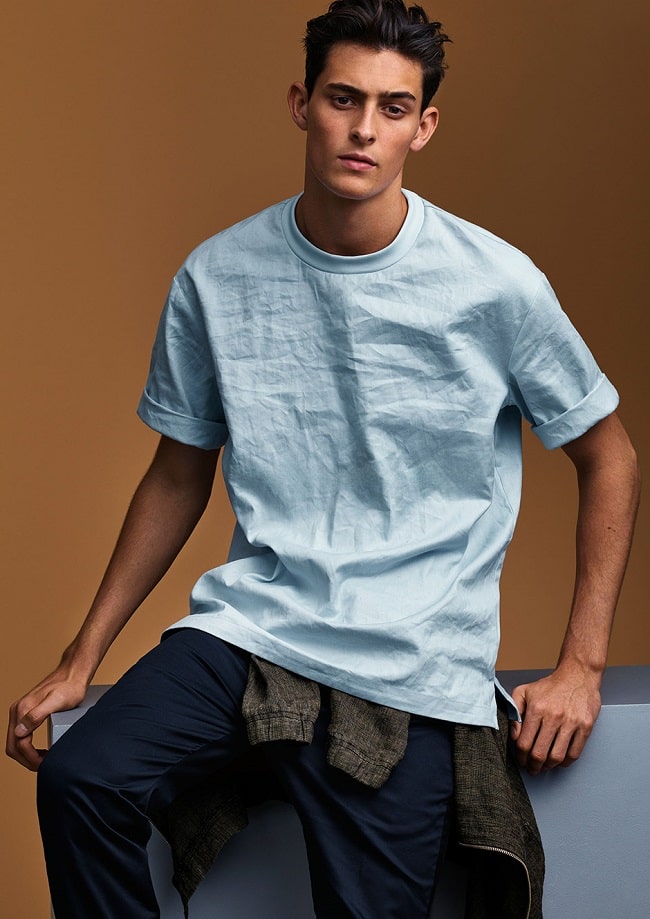 On this last note, finding the right T-shirt ultimately comes down to where you’ll be wearing it. Up until 20 years ago, you had a clear answer: In the backyard, to the gym, or perhaps to run some errands. If it got a little dirty, that was to be expected. Aside from your workout partner, who’d see the stains or grime, anyway? Nowadays, certain types of T-shirts – fitted, lightly knit, and precisely pristine – fit within the amorphous, difficult-to-pin-down smart-casual wardrobe. While much of smart-casual comes down to how you wear a garment, a T-shirt, in this instance, walks the informal-yet-sophisticated line and hints at your laidback yet professional nature. 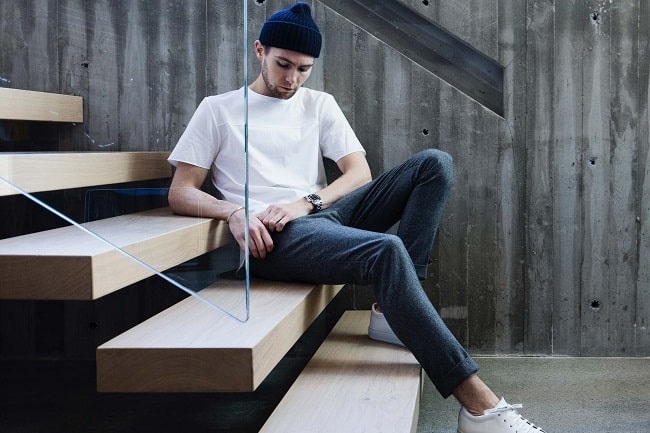 Furthermore, the active T-shirt has greatly evolved. Although, at one point, cotton was less of an athletic sin, our inner cyclist and hiker now gravitate toward performance fabrications. Polyester and spandex infuse its familiar construction – if not replace it completely – and you’ve got to be on the lookout for two- or four-way stretch, moisture-wicking, quick-dry, cooling, and breathability properties. The purpose, here, is to sweat buckets without actually looking like you’re putting in any effort. Thus, with these points in mind, it’s rare that a single T-shirt does it all. A modern man, in turn, ends up dividing his T-shirts amongst these general categories. 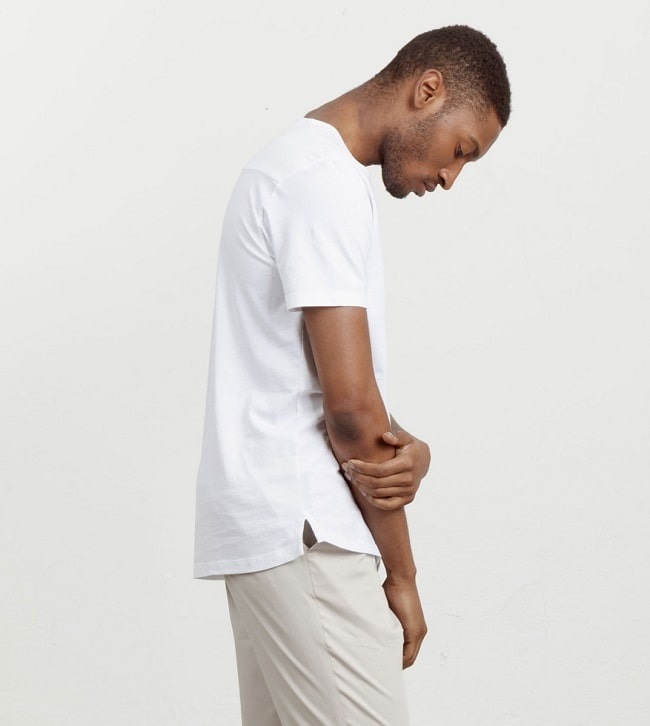 How You’ll Wear It

Under, over, or by itself? Ask yourself this – do you prefer the garment strictly on its own, do you often wear it with an overshirt, sweater, or blazer, or do you add it over a proper undershirt? Each context influences how much space the garment should have – slim, classic, or a bit loose – and the material’s weight. As well, certain neck styles tend to layer and flatter better than others. As a general rule of thumb, go for a closely fitting style if you regularly wear another garment on top. It’s slimming, streamlined, and eliminates a bulky, lumpy appearance. As well, thinner, lighter-weight fabrics tend to be friendlier for layering, no matter if you’re sporting a double-breasted blazer, sweater, or a cardigan. 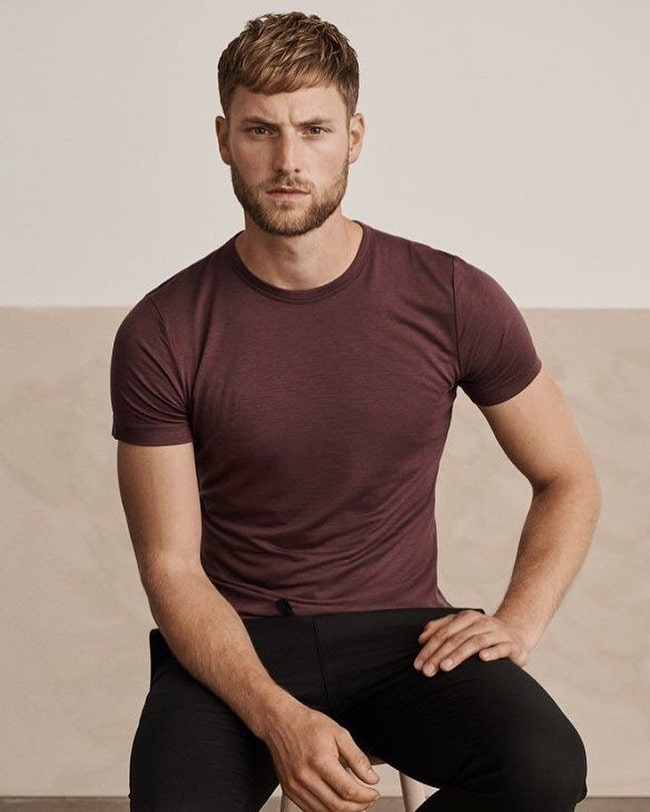 Son of a Tailor

On the other hand, heavier fabric weights and longer sleeves mean the T-shirt transitions into colder weather. Unless you’re planning to wear yours under flannel – or over a thermal shirt – look for more substantial fabrications to get through autumn and winter. Then, at least for men, you have a choice between crew and V-necks – although round, square, and even boat-neck styles also exist. Crewnecks deliver the most mileage – and have the most classic appearance. They’re an old favourite that lasts for years, and at the same time accents your shoulders. A V-neck – much like the colour pink – came with feminine connotations for years. Thankfully, they’ve mostly been shed. In return, this more angular choice has a slimming, elongating effect and offers a hint of structure to more relaxed, layered ensembles. 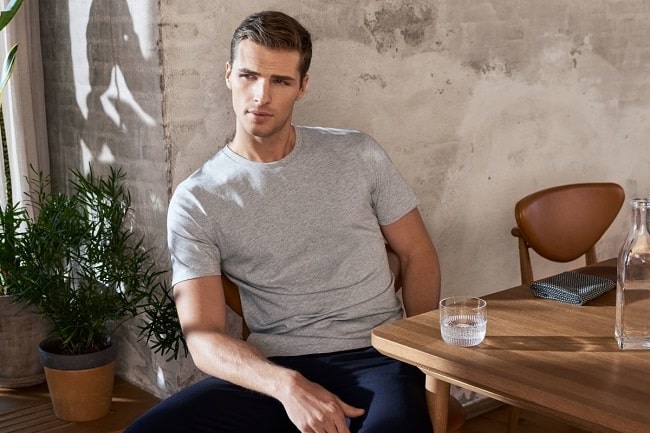 Son of a Tailor

Although those Dean and Brando films depict a closely fitting white crew, perhaps rolled at the sleeves, the average T-shirt during the past 60 or so years hasn’t been as neat or as suave. Part of this has to do with regular wear and tear. Dirt aside, repeatedly washing them causes the fabric to stretch out and lose shape, and those slightly threadbare areas eventually turn into full-blown holes. But, not having the right fit from the get-go also contributes. Especially when you’re just picking up a three-pack, trying on a T-shirt is the last thing on your mind. Between breaking at the seams and covering your shape like a muumuu, a good-fitting T-shirt doesn’t get too close to your elbows, but also doesn’t have a batwing-like effect. It aligns right with your shoulders. The seam on top shouldn’t slope past where they curve downward. It should hit or taper to your hips and waist closely. Anything higher, and you risk giving everyone a view of your naval region. Long-line and shirttail tees are the exception, going past your back side but hitting above mid-thigh. Finally, it lets your body move without being neither too billowy nor too restrictive. 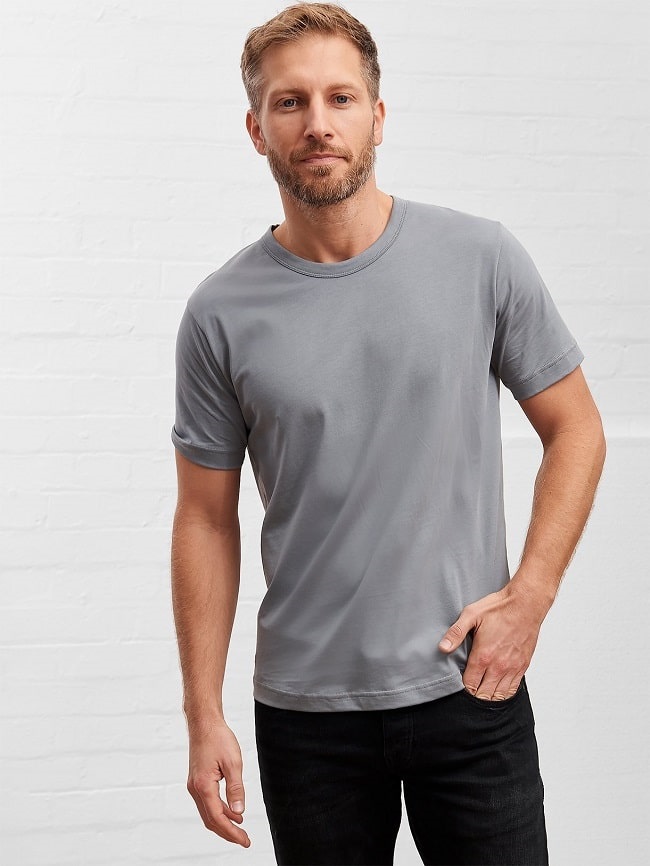 What It’s Made Out Of

Cotton’s no longer just cotton. Just thinking about this material alone, the whole organic aspect involves fewer chemicals, while sustainable construction takes this a step further and ultimately reduces the fashion industry’s and your own carbon footprint. The latter option is far more desirable – but in many cases, it involves a greater deal of research and comes with a hefty price tag. Then, going back to tradition, the poly/cotton blend drapes well and, in many instances, costs less than ordinary cotton. However, if it’s flexibility you’re after, spandex may enhance this blend – especially if it’s for active use. Other synthetics, like Tencel or viscose, create an even lighter, barely there feel. Then, there’s the subject of where the cotton’s from. In recent years, Peruvian cotton – in sturdier Tanguis and soft pima – has rightfully garnered a reputation, and brands from L.L. Bean to Lacoste have trotted out their Peruvian-based versions. As a baseline – and a factor explaining why it’s so sought after – long-staple fibers tend to last longer, hold onto dyes better, and feel soft and light, even when you’re buying a medium-weight shirt.

How many t-shirts do you own? #style #fashion