THE 6 MOST ICONIC WATCHES FROM CINEMA 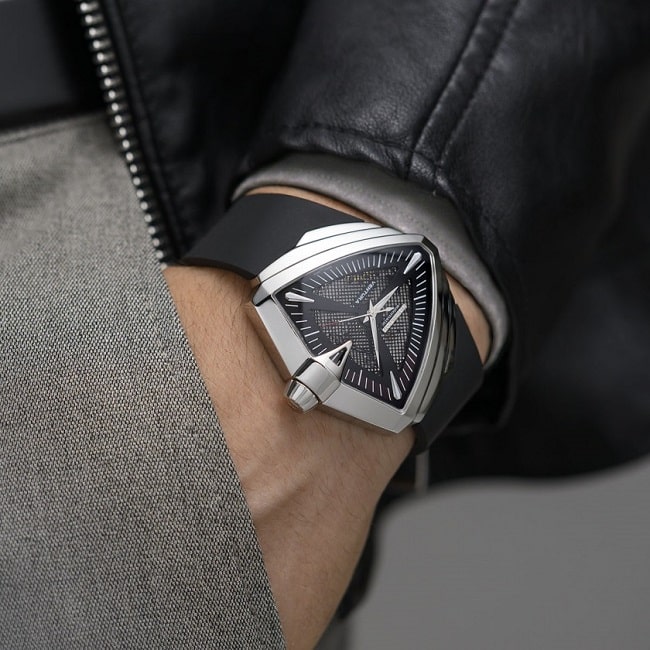 Fashion has been synonymous with Hollywood for centuries. From James Dean’s 501 Levi jeans to Marilyn Monroe’s infamous polka-dot dress, Hollywood actors and film superstars are often responsible for setting particular styles and trends. But we’re not here to talk about just any kind of fashion – we’re here to discuss the various timepieces that have been brought to the big screen over the years. From a £30 wristwatch worn by Michael J. Fox, to a £5,000 timepiece seen atop Daniel Craig’s wrist, here are six of the most iconic watches cinema has brought us over recent years.

One of the cheapest watches on our list, the timepiece that Marty McFly sported in 1985’s infamous Back To The Future was as sci-fi as they come. Featuring a calendar, an alarm, a 1/100 second stopwatch and an 8-digit calculator, the Casio CA53W Twincept Databank could even be described as the original smartwatch (albeit without the fitness tracking functionality). While the watch may be a little bit dated now, if you’re a devote Back To The Future fan, you won’t need to break the bank to channel your inner Marty McFly – this classic timepiece can be picked up for as little as £29 on Amazon today. 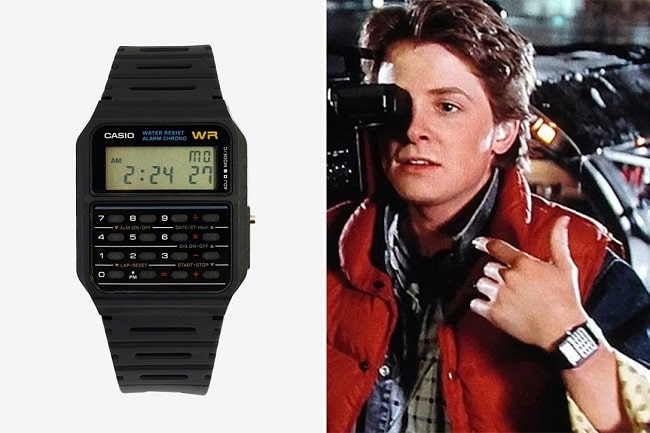 When you think of style and sophistication, the name James Bond will likely spring to mind. Suave and often seen suited and booted, 007 is a character who oozes class. It therefore only makes sense for him to have the best, top-of-the-range men’s designer watches atop his wrist as well. Throughout the course of the titular character’s 25 films, we have seen Bond wear numerous timepieces – whether it be for life-saving gadgetry purposes or simply to look cool. His debut performance in 1962’s Dr No offered perhaps the most notable example though when Sean Connery sported the Rolex Submariner Ref. 6538 – one of the century’s most defining timepieces. You’ll need to have almost as much money as Agent Bond himself to get your hands on one. Currently, the watches are priced at just over £100,000. 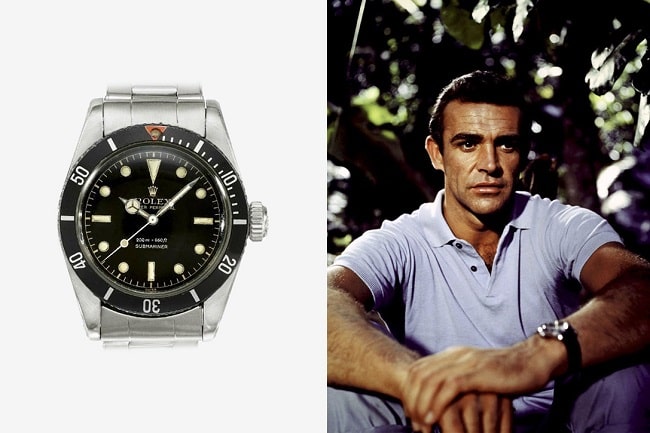 While it may look like something from the future, the Hamilton Ventura XXL was actually designed all the way back in 1957. It wasn’t until forty years later it finally made its cinematic debut, courtesy of Barry Sonnenfeld’s Men In Black. Worn by both Will Smith and Tommy Lee Jones, the watch featured a unique arrowhead style case and had previously been made very popular by another Hollywood icon: Elvis Presley. However, despite its futuristic appearance - making it the ideal choice for Earth’s intergalactic police force - the watch actually received very little screen time within the film. Here’s hoping they bring it back should they ever decide to make Men In Black 5. 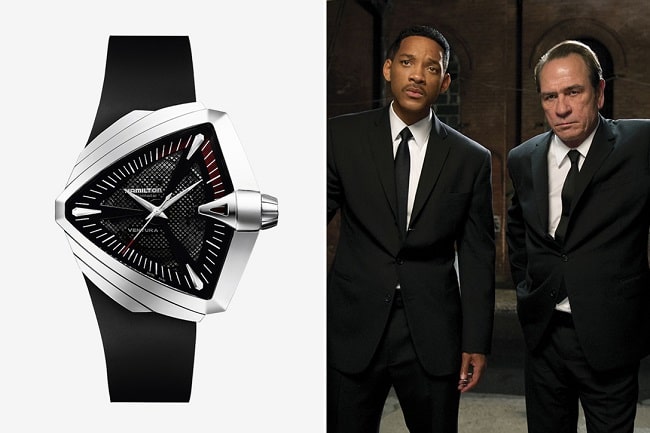 Since Pierce Brosnan’s GoldenEye came out in 1995, OMEGA has held a special allegiance with the Bond franchise, producing a range of classy watches in the films that have followed. One of the most classic watches they have produced came during 2012’s Skyfall, when Daniel Craig was seen sporting the OMEGA Seamaster Planet Ocean 600M 42mm atop his wrist. However, if you were hoping to look as cool as the super spy, getting your hands on one of these watches will set you back a pretty penny, with the timepieces currently available for approximately £5,250. 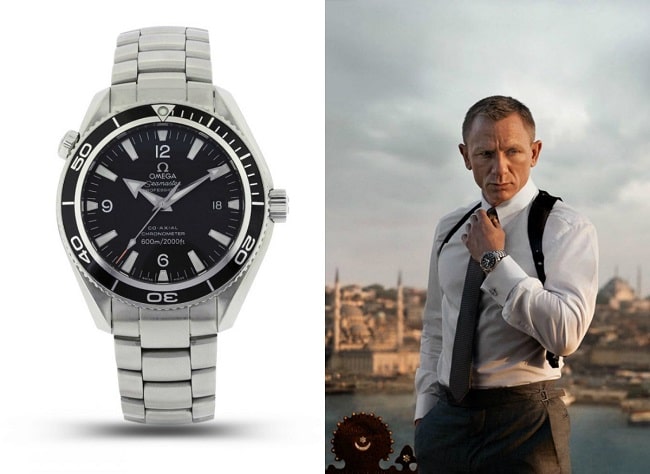 The timepiece that was worn by all four of the Ghostbusters isn’t known as a horological masterpiece as such, but it certainly stands out. In a similar vein to Marty McFly’s calculator watch, the Seiko M516 Voice Note was featured in the sci-fi comedy film due to its audio recording capabilities. Getting your hands on one in today’s market is much easier said than done though – especially if you’re want it to actually work. While there are hundreds of second-hand models available in a repair or ‘for parts only’ condition, working models are few and far between. If you are a huge Bill Murray or Dan Acroyd fan, you can expect to pay upwards of £1,000 for one of your own. 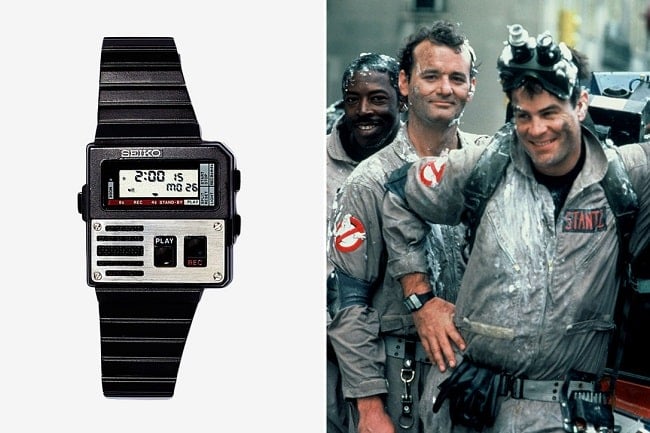 If you’ve ever seen Steven Soderbergh’s Ocean’s Eleven you will likely know all about its infamous heist scene. And, if you have seen the scene I’m talking about, you will have also likely admired the watch George Clooney was wearing during it – a Luminox Original Navy SEAL 3901. Originally designed for the American Navy SEALs, Luminox have actually had their watches featured in a number of other films over the years too, including Viggo Mortensen’s G. I. Jane and Dwayne Johnson’s Walking Tall. To look the part of George Clooney’s Danny Ocean though, the Luminox Original Navy SEAL 3901 will set you back approximately £300. 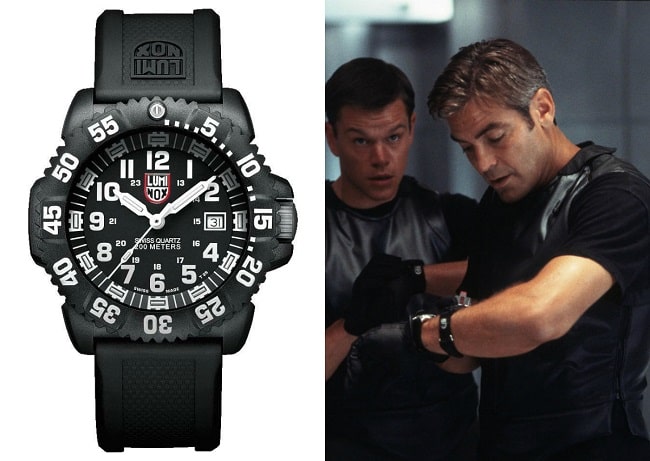 Find more iconic watches in this History of Time article.