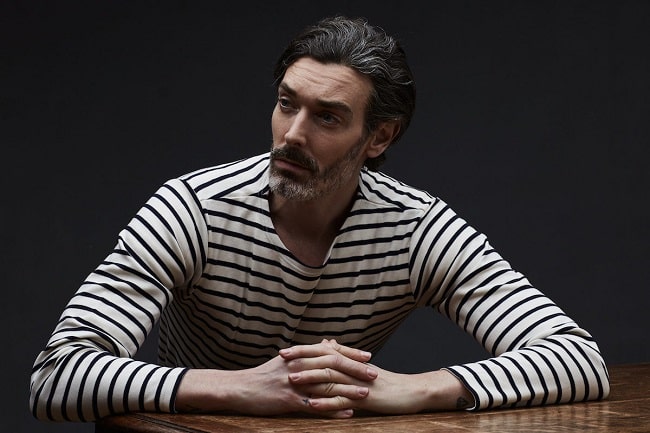 Winter’s got a good month and a half left, but we’re thinking ahead to that ultimate summer vacation – preferably somewhere along the Mediterranean, on a yacht, with lightweight linen trousers and Breton stripes. The coast’s just off in the distance, and the precise sea breeze-and-sun cocktail hits you just where you need it. Perhaps you’ll pull into the dock to explore the next town, but for the time being, it’s just miles of turquoise waves in all directions.

Fashion itself can be some form of escapism, especially when you’re pressed to take less and less vacation time to the point a Friday at home seems like a break you’ve got to savour. SS20’s paradise, then, is based in nautical themes, which holistically pull from pop culture and, as typical with many menswear trends, military and Navy influences. From SS20 presentations by Loewe and Lanvin, fleshed out in sun-drenched yellows and blues, horizontal stripes, and peacoat-based silhouettes, that amalgamation of influences has become this year’s most aspirational trend. But, before you’re all anchors-aweigh in white and navy, here’s how to approach nautical fashion. 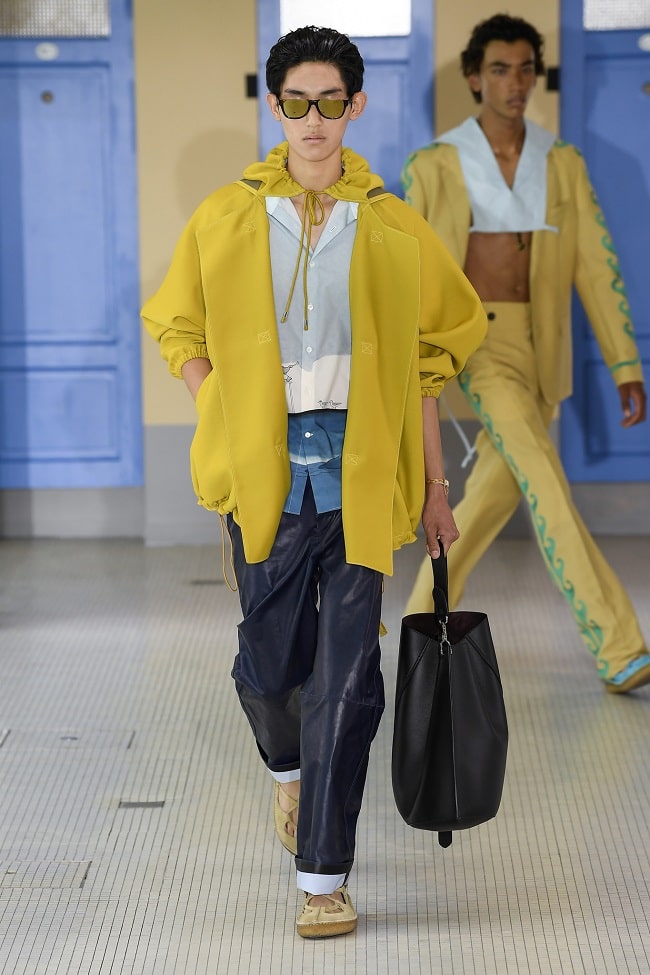 Contrary to mid-century Hollywood inspired vacations or Talented Mr. Ripley influences, nautical menswear isn’t strictly for summertime. On that note, the trend itself reared its head this past season, through Navy-sourced, wool-constructed garments that once were strictly for practical wear.

In the present, the fisherman’s sweater’s impression comes down to a chunky, sometimes cross-hatched knit and close-fitting crewneck. Going back centuries, countries along the northern Atlantic had their individual versions of woven wool garments, in which the naturally occurring lanolin repelled moisture to keep the wearer dry. The fisherman’s sweater grew out of this, and no matter which side of the Atlantic you lived on, it kept the wearer warm and dry with a tight weave and closer fit. Although different knits eventually came about – most notably, the Shetland, Guernsey, and Aran – the modern-day version has moved inland, with a less-heavy cotton-wool blend and a textured cable-knit appearance. Yet, it’s not so removed that its origins aren’t evident. 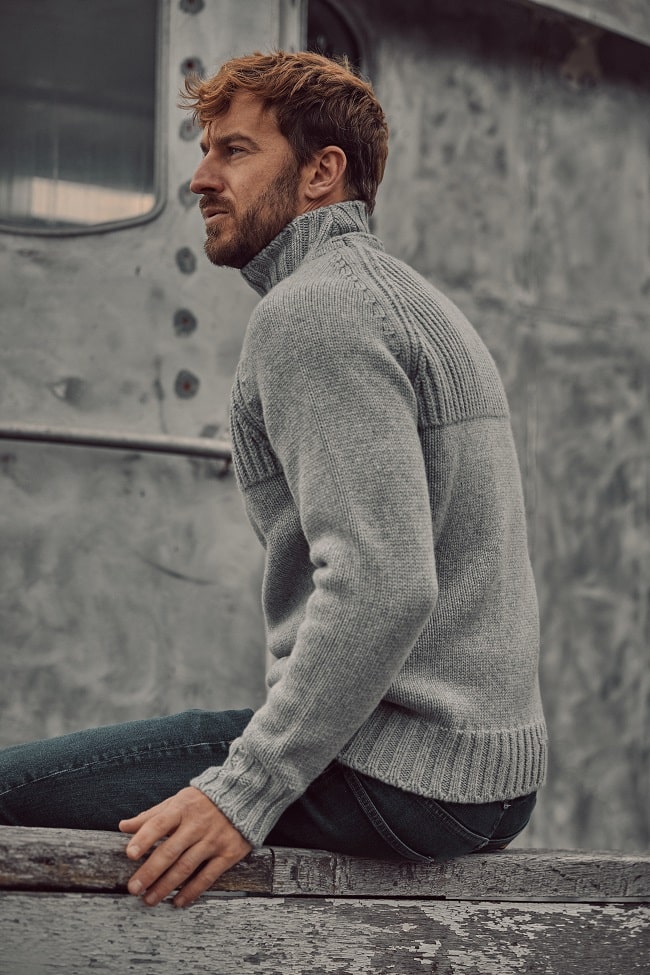 The Peacoat and Bridge Coat

Although current interpretations pull liberally from older U.S. and British Navy uniforms, its history is somewhat murky, with a name alluding to a Dutch cloth (“pije”) and heavy wool construction that became the norm by the 19th century. Through any reference, though, the peacoat has long been the most accessible seafaring style – perhaps because its origins feel fairly remote from modern interpretations. On the other hand, as we’ve explained a few times, the garment’s double-breasted fairly cropped shape falling no longer than mid-thigh is relatively versatile – matching practically anything in your wardrobe without the grandiosity of a full-on trench coat. And, taking advantage of wool’s nature, military surplus versions tend to deliver a higher-than-expected amount of warmth for their weight. This time of year you could walk along the partially snow-covered beach and not feel totally chilled to the bone, and that’s exactly the point. The bridge coat extends this concept quite literally, with a past-the-thighs length and similar double-breast design. Although some versions do sport epaulets, the jacket itself is a modern-day hybrid of a trench coat and a peacoat, and proves to be a winner when you’re seeking out extra coverage but aren’t in the mood for a knee-length puffer jacket. 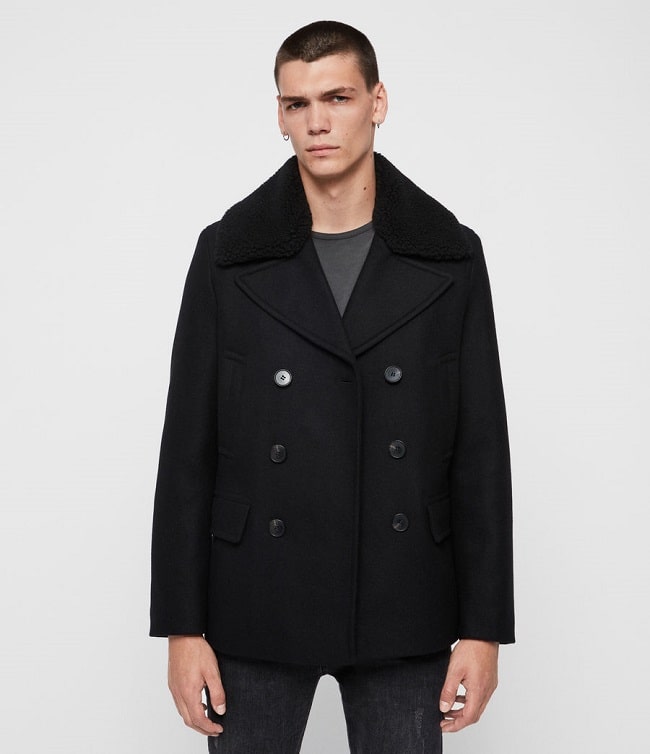 Dating back to the 1930s, the CPO – or properly, Chief Petty Officer shirt translates a peacoat’s qualities into shirt-jac form. Schott developed a design for the U.S. Navy during World War II, and their current products are based on the same versatile framework: A heavyweight wool body with a flannel-like hand feel, flap pockets on the chest, a shirttail hem, and a point collar. Although some versions out there have a snap-button placket and hip pockets, the function’s all the same: A piece that can be worn over a T-shirt or under a peacoat that delivers warmth and water repellency in cold, damp conditions.

Although its construction runs similarly to the fisherman’s sweater, this garment characterised by a fold-over, thickly woven rollneck collar was a staple of the British Navy through World War II. As with other cold-weather nautical pieces, its heavier knit wool construction is its asset: Wool holds body heat close in cold conditions, especially when paired with a wool jacket, and it is less likely to leave the wearer damp and shivering. Today’s versions stay true to the original, with a finer-knit, although less-heavy body and a ribbed collar. 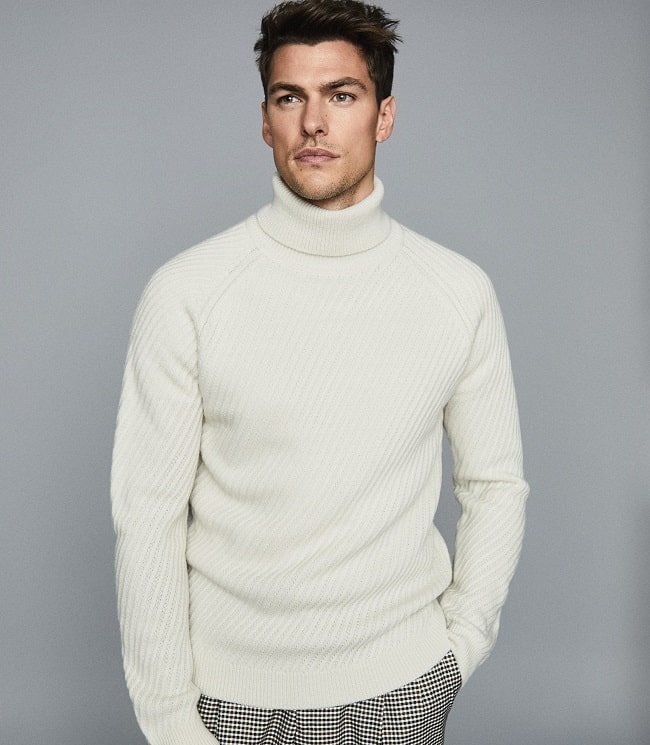 When someone says “nautical fashion,” the spring-to-summer pieces are what they’re picturing. What we consider warm-weather nautical pieces, however, are an odd hodge-podge of military- or navy-based styles and those associated with vacation wear. Some, like the double-breasted blazer, appear like peacoats lightened up, perhaps accented with some gold buttons or epaulettes.

Chinos are such a staple of everyday menswear that practically everyone forgets how the trousers officially originated during the Spanish-American War. The style, based on the British Military’s khakis, ended up with a tapered leg due to fabric shortages, and became a staple of the U.S. Military for a few decades after. Mid-century, you’d see Ivy Leaguers sporting them along with boat shoes and a navy blazer, and its impression thus evolved from a military-sourced piece into a preppy staple that didn’t officially die until the ‘90s. The late ‘00s shift to skinny-cut suits and trousers revived chinos, but you’re more likely to see them paired with lace-up boots or trainers than a set of boat shoes, although, together, they do encapsulate that mid-century vacationer look, whether you picture your boat somewhere off the New England or Italian coast. 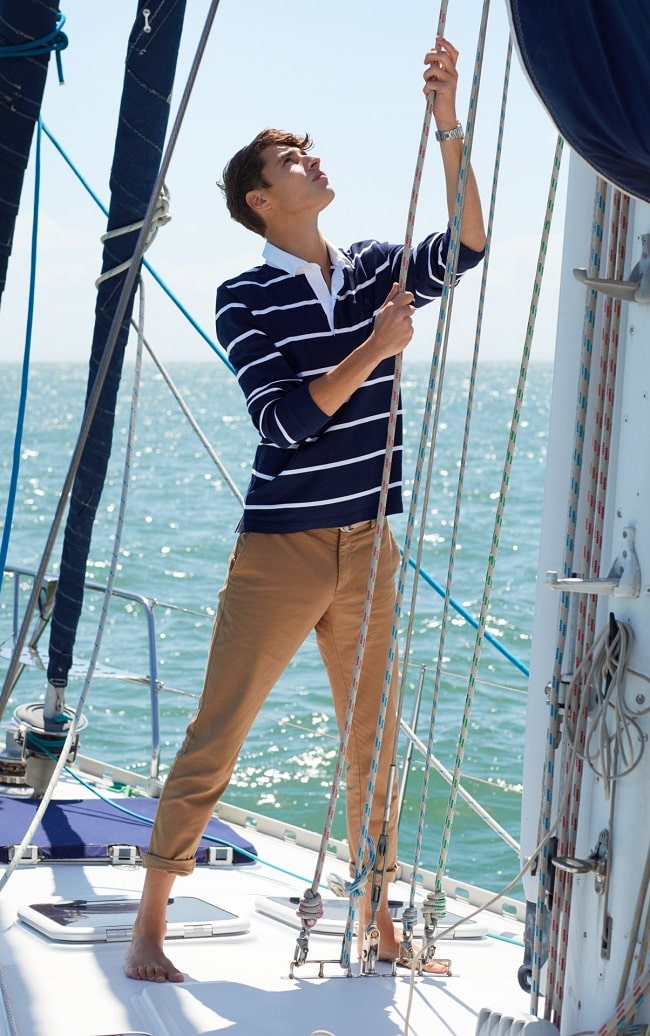 Today’s styles, naturally, utilise cotton, as when the sun’s overhead, even the finest wool construction will still make you sweat. These versions owe more to the inspired piece Coco Chanel introduced in the early 20th century than the original styles worn in the mid-19th century by the French navy. Initial designs, featuring 21 navy stripes, allegedly referenced the number of battles Napoleon Bonaparte won, and also featured a wider boat neck and three-quarter length sleeves. Chanel’s version lightened up the material, which increased its appeal for the Riviera crowd. Today, no one truly seems to be counting the number of stripes, and while the boat neck and shorter sleeves make the silhouette easily recognisable, the colourways break away from the predictable white-and-navy combination.

Paul A. Sperry unveiled this style in the 1930s, with a textured outsole – called Wave-Siping today – that diverted water away and offered slip resistance on a wooden deck surface. Unlike the other styles listed here, the boat shoe isn’t a military- or navy-originating style, but it has stuck around for two reasons. One, it’s still very practical and eliminates adding large, obnoxious lugs to a pair of lighter-weight loafers. Two, as an eventual preppy staple particularly in coastal New England, it’s available in a larger range of colours and materials, from leather to canvas and solid to stripes and plaid, but retains a familiar, nearly unchanged shape. 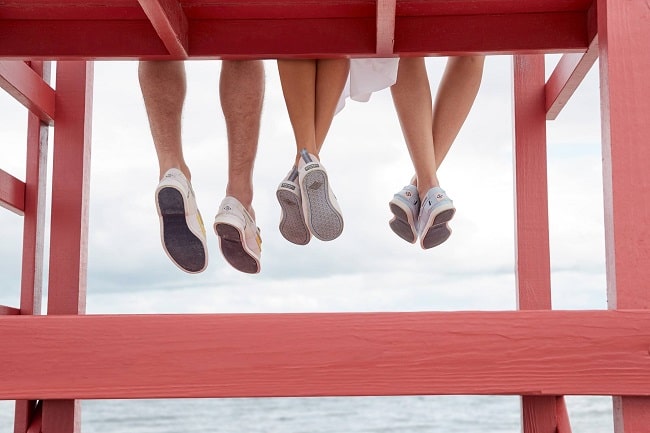 Especially because it comes in waves – bad pun – nautical fashion can seem a bit costume-y, like you’ve sifted through too many old military or period vacation photos. More than one piece comes on way too strong, or worse, makes it seem like you’ve got yacht captain fantasies. As such, think about pairings: Because chinos have shed much of their history, it’s not a huge faux pas to wear them with Breton stripes, especially if your trousers are a modern-day shade of dusty pink or subdued mint green. On the other hand, sporting them below a double-breasted blazer in navy or a peacoat by autumn comes across too heavy handed. As well, save the boat shoes for your chinos and shirt ensembles, as the reference is subtle. Beyond this, consider mixing materials. As one source of inspiration, Ferragamo’s AW20 presentation contrasted a traditional peacoat against silk bottoms. As a third option, deconstruct the silhouettes if you can. The 2020 Paul&Shark lookbook, for instance, grabs several nautical silhouettes, but keeps them on the oversized side to subvert expectations without completely throwing out all allusions.