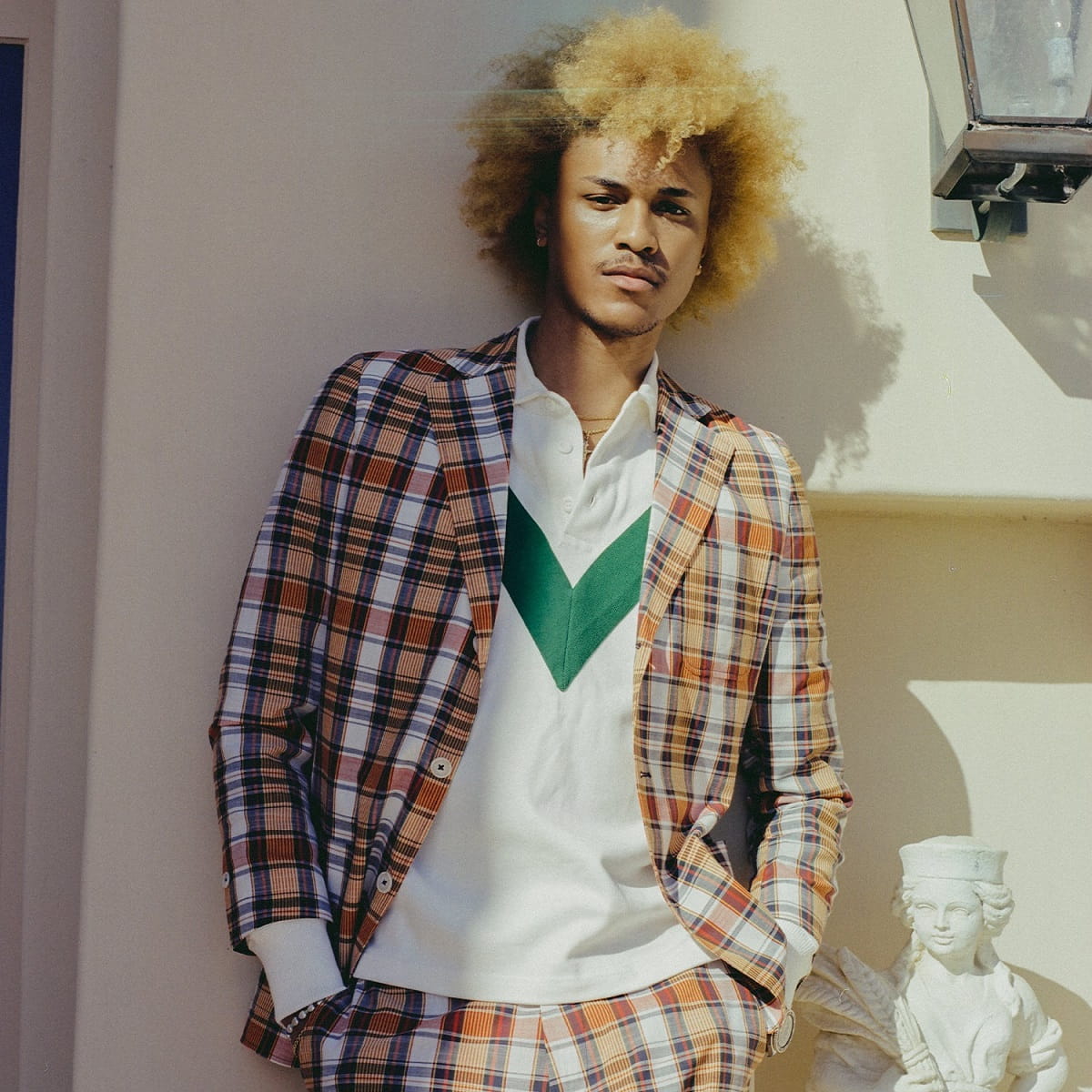 Sometime during the whole blur of the past two years, a Gossip Girl reboot was announced. The perfect symbol for our times, revisiting the fictional antics of New York City’s upper-class youth was positioned as an authentic, more diverse antidote to the original’s too-precise, overtly WASP-y image. Beyond the diverse cast, early promotional photos presented the new crop of students in oversized, somewhat disheveled and androgynous interpretations of their uniforms.

While critics rightfully panned it as seeming slightly outdated from the get-go, one aspect was right on: Preppy fashion – whether on the runway or in a fictional prep school – no longer resembles plaid skirts, loafers, and digs that hint you’re jetting off to Martha’s Vineyard to rub elbows with the Kennedys for the upcoming weekend. Instead, much like the Gossip Girl reboot itself, it’s angled toward a more diverse crowd – yet still comes off as exclusive – and has been visually distorted. The funhouse effect comes through oxfords falling past the hips and enveloping torsos of all sizes, double-breasted blazers hanging off the wearer’s shoulders, and pastels electrified to seem like muted neon shades. In short, two, disparate styles that traveled separate paths from the 1980s onward began to converge back in 2019, and now, we’re living through the ultimate hybrid movement. 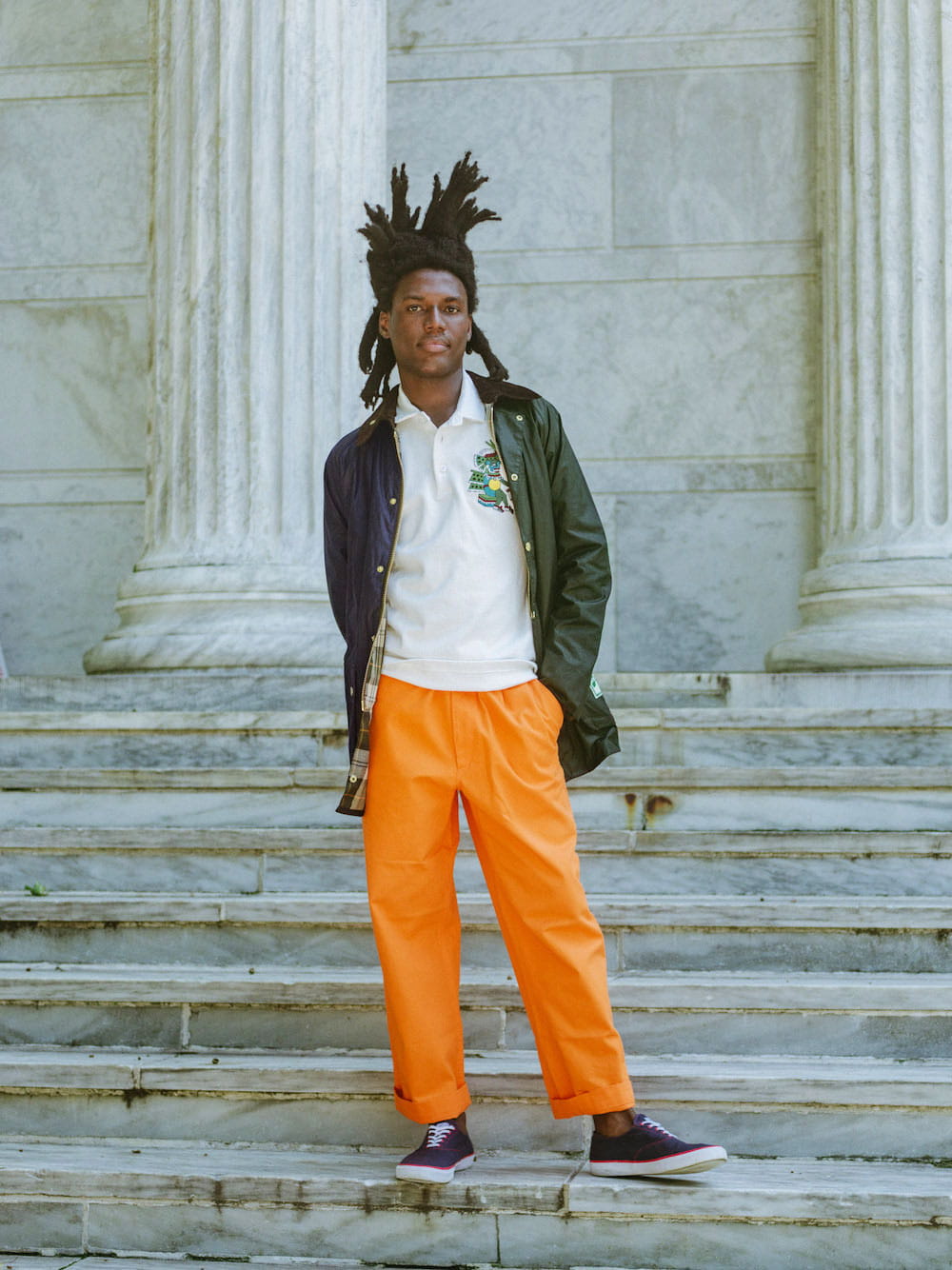 Attesting to this, figures from The Real Real and Depop give no clear beginning or end to either trend: Dad core brands saw a 24-percent decrease in searches over the past year, while inquiries into preppy fashion, based on keywords, rose over 50-percent over the same period. Perhaps illustrating the turn of the tide, searches for Ralph Lauren went up nearly 30 percent, indicating a desire for authentic preppy style, rather than a streetwear approximation. Of course, keywords paint just one picture: From patches to distressing, even Ralph Lauren understands the importance of adjusting to consumer preferences.

While the fetish for box tees (and sweatshirts and caps) likely won’t die down any time soon, here’s how and why streetwear’s gone in a preppier direction:

These days, being basic feels revolutionary. That’s not just fashion: Simply settling and accepting the mundane, rather than striving for the largest, grandest expression, comes off as quaint and, dare we say it, kind of retro.

While “basic” itself in the present comes with a whole host of other assumptions, streetwear has tried on ironic and intentionally exaggerated images of the ordinary: Somewhere in 2018, we saw this with dad fashion – high-waist jeans and blue button-downs accompanied by oversized New Balance-esque trainers – and then gorpcore, embracing the weekend hike or camping trip through technical nylon fabrics, lots of pockets, and bucket hats. From here, certain garments associated with stability have seen periodic peaks: consider the revived bomber in varsity jacket form, golf-inspired fashion, last year’s chunky loafers, cargo trousers, and, coinciding with the swell of preppy menswear, V-necked sweater vests and polo vests, although not always worn with each other.

It’s a contrast to the dichotomy between the runways – where tailoring 2.0 and maximalism continue to be pushed like its 2019 all over again – and our athleisure-heavy, hybrid everyday wardrobes involving joggers, drawstring chinos, and house shoes because we’re not really going anywhere. Preppy streetwear – pulling from skate fashion, hip-hop, and workwear and fusing this aesthetic with traditionally Ivy League silhouettes – bridges the two sides, delivering comfort and something semi-office friendly without resembling a tracksuit or sweats. 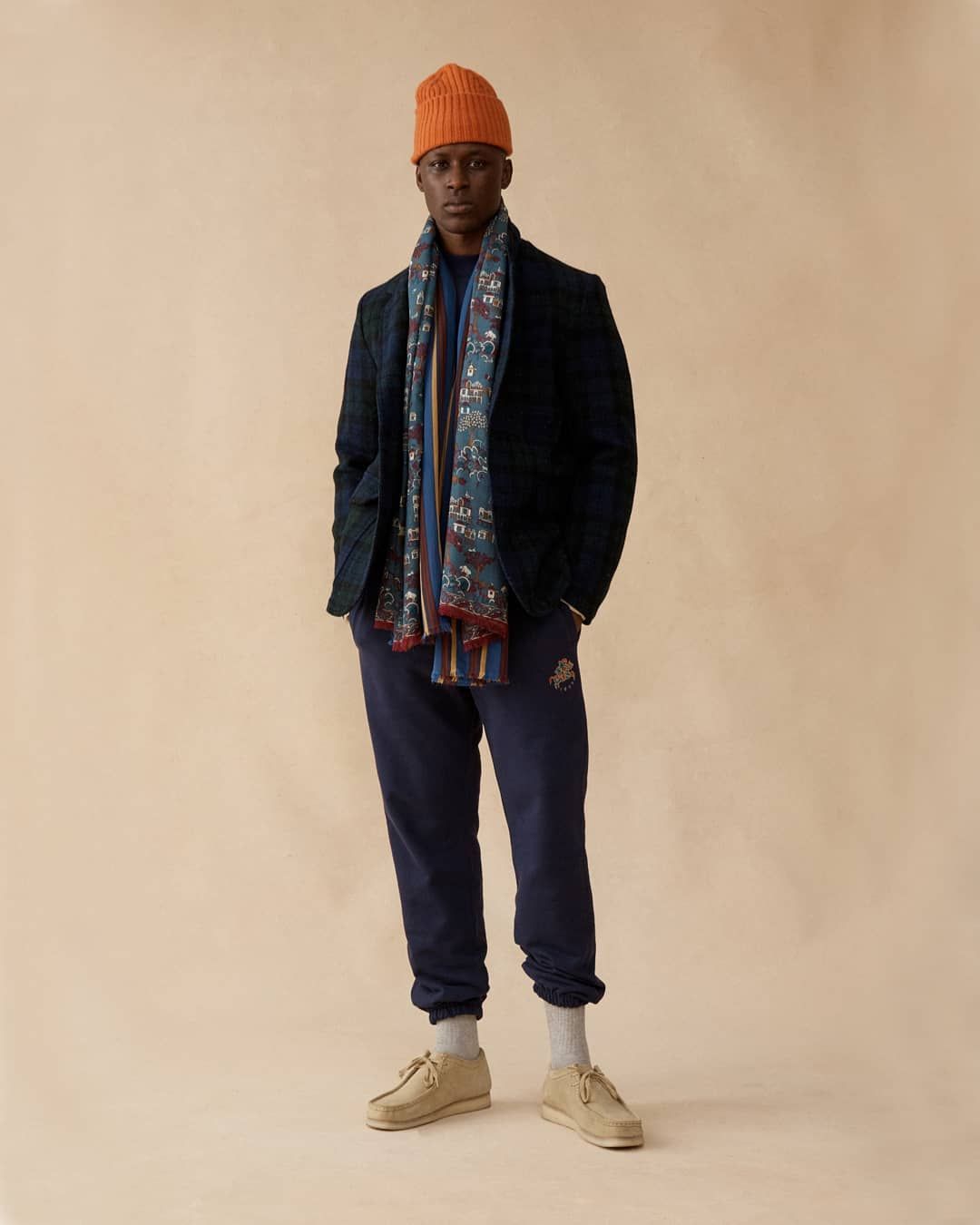 “New” prep ultimately comes down to taking something traditional, be it a blazer with a coat of arms-style patch or a rugby shirt, and deconstructing it to push it as far from its origins as possible. It’s through the same ethos that parody fashion emerged sometime in the ‘90s – exaggerating and making a social statement through mundane symbols. This time, rather than to thumb a nose at social conventions and cloistered extravagance, that’s to open the doors to the ivory tower and what it’s come to symbolise.

The result ends up being a looser, more informal interpretation of the classics – chinos that bag, blazers that start to resemble overcoats, and a technicolour palette that, over 40 years ago, would’ve gotten you stopped at the country club’s front door. Simultaneously, from this approach, a more sophisticated streetwear brand –perhaps through age, response to trends, or both – has emerged to the point it’s parody (and meme) worthy.

The most obvious, to date, has been Noah, founded by Brendon Babenzien – formerly of Supreme – before he jaunted off to J.Crew. Starting from the mid-2010s, Noah essentially embodied skate-leaning, prep school-via-thrift-store normcore that, in hindsight, seemed like the ultimate statement of blasé wealth: A sizeable chunk of change to look absolutely ordinary. 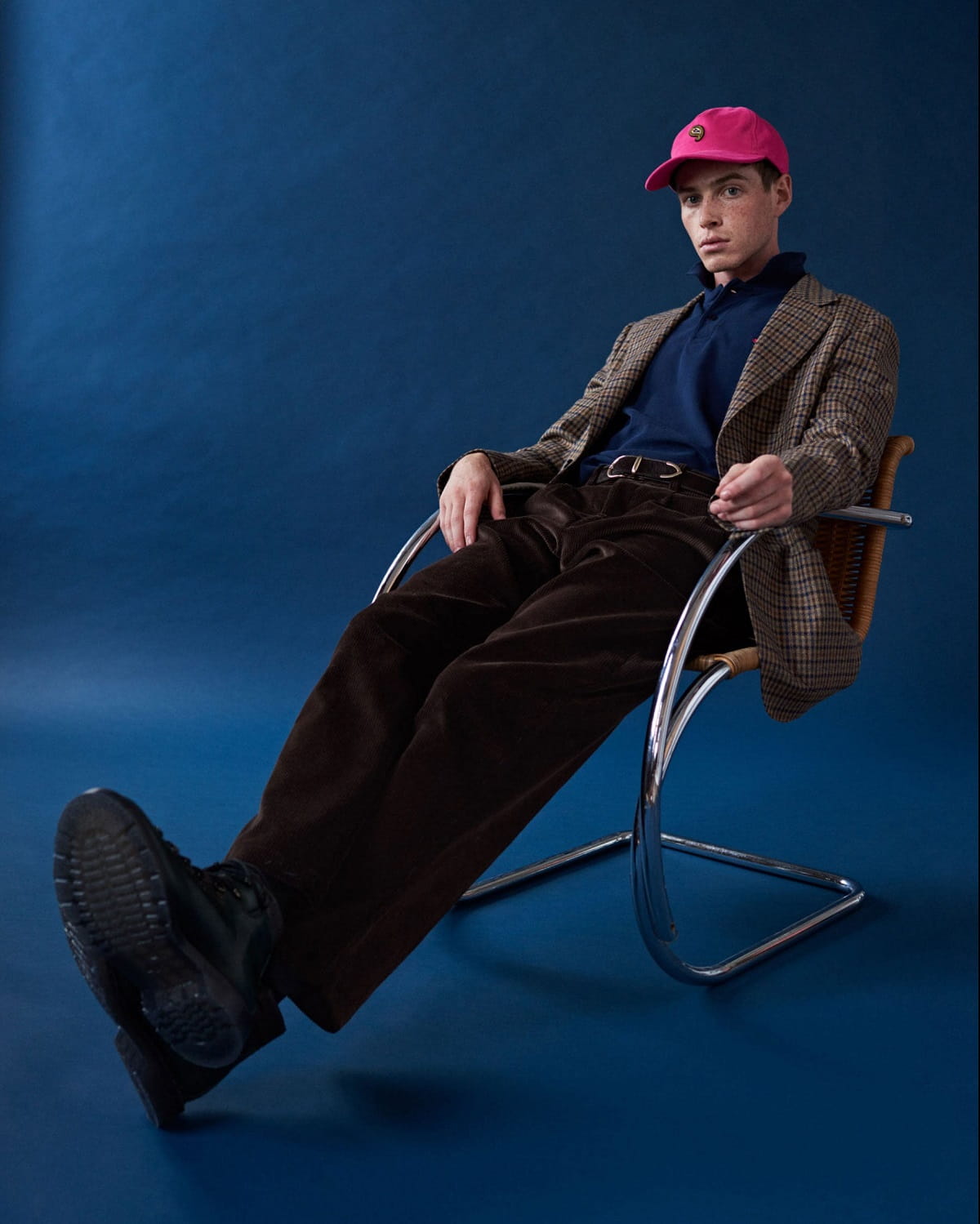 Rowing Blazers, meanwhile, has viewed preppy silhouettes as a framework meant to be stretched out and lengthened and, at the same time, a canvas for less-predictable shades: Pastels worked back in the 1980s, but now, they’re sidelined via the brightness of primary hues and extensive colourblocking.

Awake NY, meanwhile, parodies the 1990s destination sweatshirt. Heightened pastel hues and fonts are reminiscent of Ivy League school garb that you’d also find on a classmate who came back from a trip to Nantucket or whose family owns a summer house on Cape Cod.

Then, there’s Aimé Leon Dore – perhaps the most-hyped streetwear brand in the present, parodied via memeification to an urban Arc’Teryx degree for its peak pedestrian vibes. It feels like 1990s Polo jointed up with Carhartt and then decided to settle for an uber-unassuming palette of tans, navy, greys, and black with random pops of orange. Save for those who pore over lookbooks and seasonal collections to gear up for their hunt on Grailed, Aimé Leon Dore ends up being a fashion paradox: a brand so bland, it feels practically revolutionary in our hyper-maximal present. No branding is visually to be found, no colours distinguish you on the sidewalk, and no exaggerated lines scream parody. Its cult status can’t be explained beyond the hypebeast cycle, further turning it into a sign of our times: Unremarkable yet coveted. 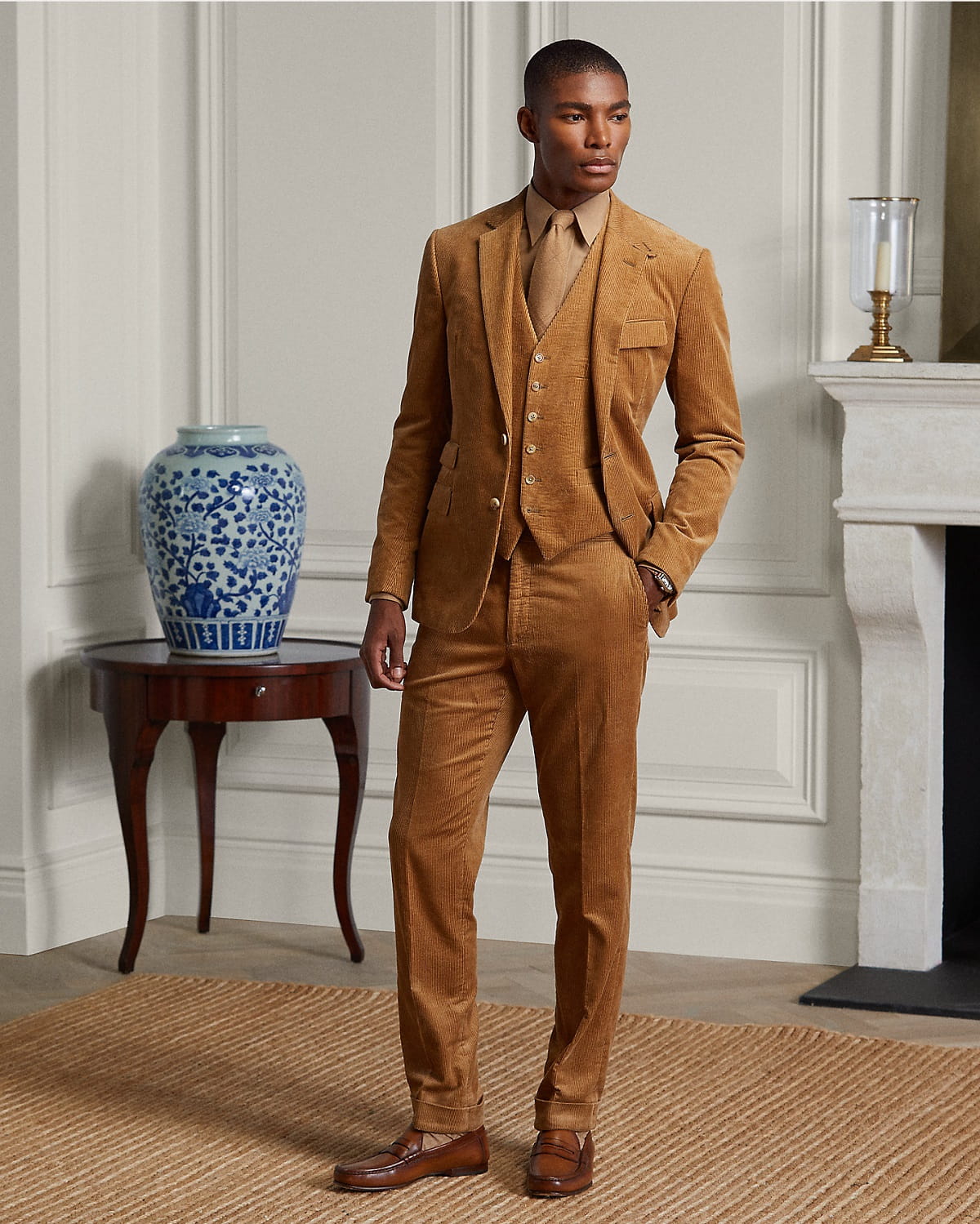 The Time is Right

We’ve spent the past eight or so years dabbling with 1990s-era trends, to the point we’re living through a Y2K revival. Among the late 1990s hubbub, streetwear brands have strayed past overt skater influences to the start of that period’s logomania: sportswear with otherwise preppy connotations – Polo, as well as Tommy Hilfiger and Nautica, all prominent come to mind. Similar to our present, late 1990s sportswear involved hip-hop stars elevating preppy basics but without much change in design. The present iteration mirrors this for-the-masses approach but diverges in how silhouettes are constructed. As such, brands and their consumers – whether parodying or lusting over the “old money” or dark academia aesthetic – don’t just claim something exclusive and off limits as theirs, but opt to change it on their terms.

From older Millennials now settling into a mid-career management role to their younger cohort and Gen Z counterparts beginning to make a dent in the workforce, you can’t exactly show up at the office in a box tee and joggers. That doesn’t mean you suddenly transform into the middle-aged adults of yesteryear, content with poorly fitting pleated trousers (at least wear a higher waist), wearing clothing purely for function, and completely devoid of pop culture knowledge.

Instead, compromises become necessary: In this case, that’s a fusion between mature and edgy, some tailoring but with the comfort of sweats, and holding off on the logos until the weekend. To some extent, this development explains the popularity of outdoor brands as of recent for their techiness, nostalgia, and protective properties shrouded in basicness. Preppy streetwear ultimately does the same: couching something more experimental – at least to certain tastes – in the guise of something visually unadventurous, so that it flies under the radar to all but a select few.