OUR HIGHLIGHTS FROM DAY 2 OF THE LONDON COLLECTIONS: MEN 2014

Written by Menswear Style in Events on the 8th January 2014 / LC:M Day 2 Highlights 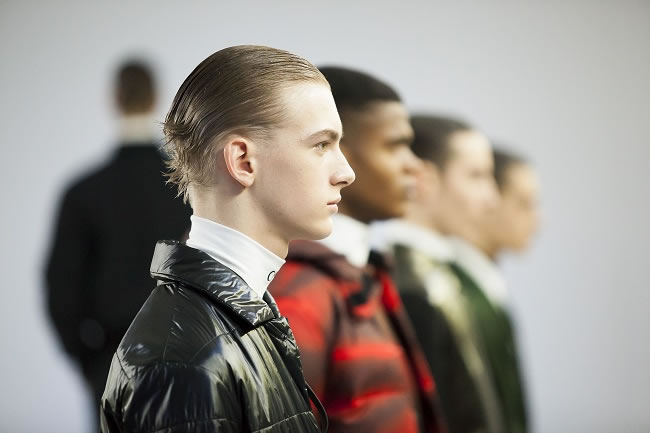 The morning after the first day’s hectic schedule and late evening events usually takes its toll, but thanks to our stylish ‘Menswear Style Lounge’ at the Radisson Blu Edwardian, we were actually feeling quite perky. The location of this Hotel near Tottenham Court Road is perfect. It’s a stone’s throw away from the Old Sorting office, a discus throw away from Victoria House, and a javelin throw away from the Hospital Club. It certainly makes a difference having somewhere to retreat to in-between shows for a quick rest and to refuel. Here’s our highlights from day two at London Collections:

YMC – we were kindly invited backstage by Sassoon to get a closer look at how they prepare all the models' hair before a show. However, we’ll save this for an exclusive feature another time. We also had runway tickets and it was such a great walk – full of cool wearable street/urban casual pieces, which is what you’d expect from YMC. A playful and stylish take on the much-derided tracksuit formed the starting point of the collection, which effortlessly juxtoposes smart tailoring with sporty, casual pieces.

English Gentleman at Cabinet War Rooms - The most creative English Gentleman presentation to date. As before a showcase of the finest that Savile Row, Woolmark and St James's have to offer but infinitely more fun, set in the Cabinet War Rooms the subterranean HQ of Churchill's World War II campaign to save Europe from the ravages of Hitler. From the hot debates in the main control room to the dark and shadowy men of the secret service in long coats and homburgs to the loneliness of the night shift where men's only comfort came from Ovaltine and a good dressing gown. 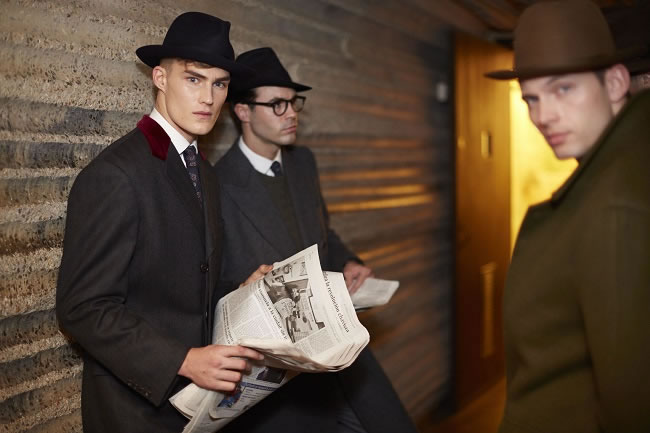 Crombie - This collection was a delight. For AW14 Crombie have delivered an exceptional collection that takes the very best elements of Classic British tailoring and adds refined touches of pure luxury. Polished horn buttons, bespoke leather trims and astrakhan collars create a perfect balance that is both timeless yet modern. The pieces are effortlessly wearable but not in any way dull. Men's outwear as good as it gets. 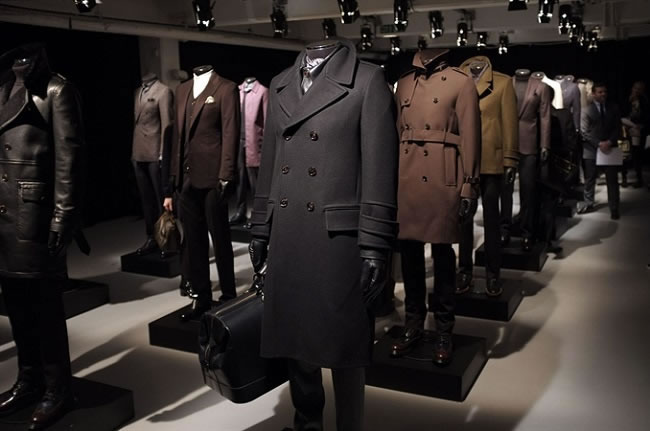 Duchamp - Duchamp's Autumn Winter presentation incorporated an element of fun and uniquely gave the clothing a story and a context. Three scenes greeted the viewers at the Royal Academy of Art: a tense game of poker, a light hearted 'duel' using canes called 'Bartitsu' and a relaxed game of chess. A mixture of actors and models presented each scene, but it was the interaction with the audience that set this presentation apart. The styling was very 'dandy-esque', exemplified by a Scottish tweed three piece suit, oversized houndstooth prints and sharp single breasted jackets. Each look cemented their status as an on-trend label, but with the crucial benefit of relatability and an emphasis on lifestyle. 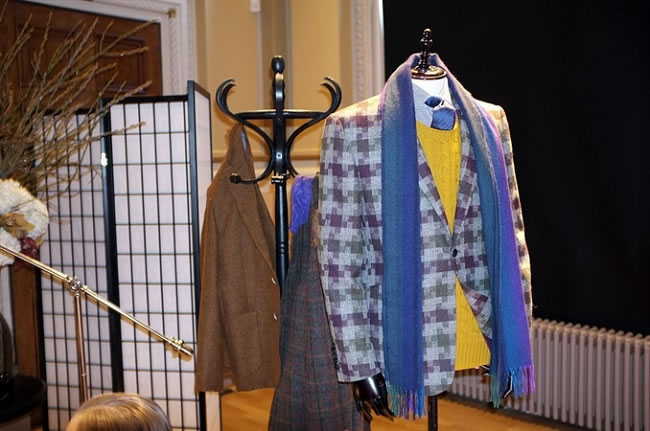 Richard James - One of my favourite shows of the season, the master of Savile Row took things up a notch this time. Deep base colours of coffee, khaki and burgundy in the slick tailoring, with the occasional shock of blocked teals and golden yellows gave the collection a new depth. The eveningwear is a must-have, glitter ball sparkle blues and burgundy in the shawl lapel suiting, styled with dandy accessories and neck ties. James truly brought it home when he stepped outside of his sartorial comfort zone with a beautiful teal leather biker jacket, accented with gold zips. WOW! 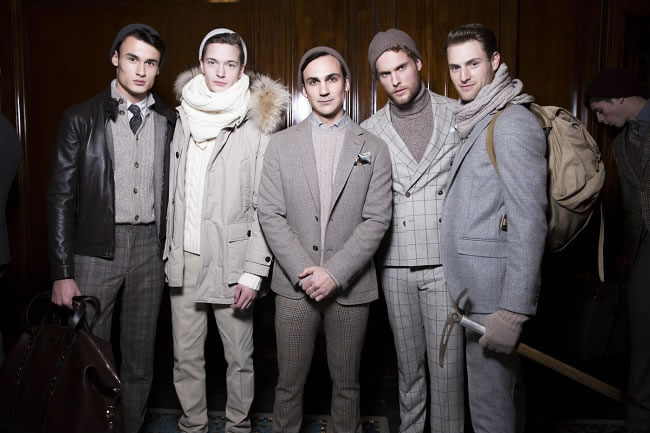 Christoper Raeburn - The hideous weather at 10am this morning didn't seem to dampen the crowds enthusiasm for Raeburns collection! There's a level of quality in his finishings not seen often in such a new kid on the block, which gave the whole collection a real grown-up aesthetic. A refreshingly masculine range with a big focus on statement outerwear, the collection really came in to it's own with the shearling coats and fur accents. Inspired by the work of Icelandic documentary photographer Ragnar Axelsson “The Last Days of the Arctic”, Raeburn has embraced the spirit of adventure in this collection and the warning of global warming with the limited edition REMADE collection, parkas made from German Army sleeping bags and sheepskin Siberian Officers coats de-constructed to create a Scott of the Antarctic shaggy elegance. One stunning full shearling piece I can only describe as 'the sasquatch' got actual "whoops" from the usually staid menswear crowd. Block colours played a strong part here too, a quilted parka and rucksack were particular strong pieces, in a canary yellow. 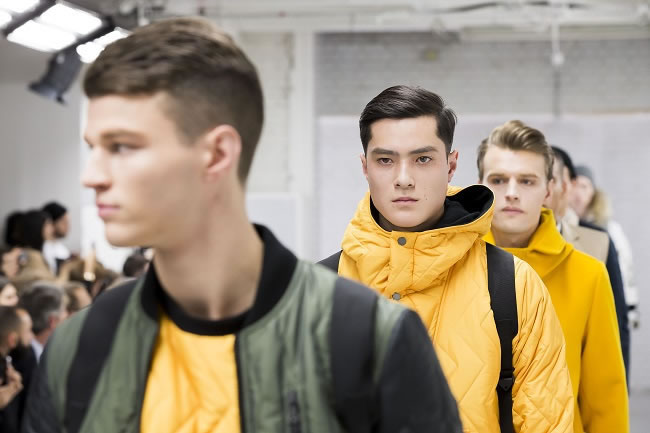 Rake - Offering more of a traditional feel than what I have seen so far this week, Rake shyed away from complete modernity, and kept more of a classic feel throughout. With traditional tailoring and a complimentary colour palette that boasted traditional greys, navys and browns. Rakes (Clive Darby's) inspiration for the show featured a take on traditional playboys, and David Niven's 'Phantom' in the first Pink Panther film.

For the evening's parties we headed to an event by Liberty, Men's Health and YMC - but with an oversubscribed guest-list and only a few behind the bar, we quickly headed over to Pretty Green for a cocktail. Afterwards, we headed to Superdry's first ever LCM event and it was absolutely brilliant. This is how a LCM party should be... an amazing branded bar, lots of fast flowing cocktails, great music, and a large space to hold everyone. Great work! 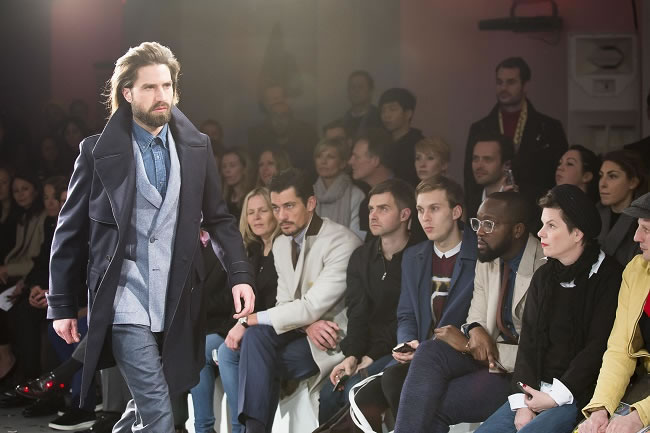