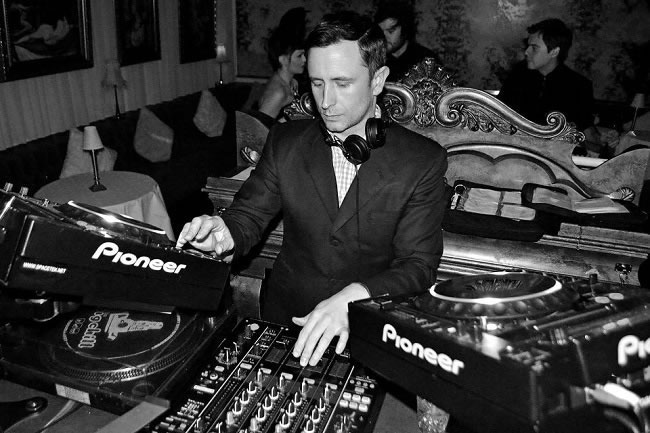 Adam Ficek’s most prominent role to date has been as drummer for Peter Doherty’s post-Libertines band, Babyshambles. With his Rat Pack style threads, guests in the Baroque lounge at the Playboy Club would be forgiven for overlooking the roots of their resident DJ, but Ficek has recorded and toured with the band for eight years before leaving to focus on his solo project, Roses Kings Castles.

“My time with Babyshambles was fantastic but it felt like time to move on. I knew my own output could never compete with the power branding of commercial pop but it felt sincere. I, as a musician needed expression over commodity. I wanted to make something that had the sonic power of the stuff I was hearing and DJing in the clubs, yet still incorporated the ragged guitars and song writing of British beat music.”

Baroque is Playboy Club’s latest concept, offering guests world class cabaret and live music. “The Playboy set is a complete musical evolution within the framework of the evening. I try to make the sonic background less BPM orientated, more based on colour and energy. I see far too many Laptop DJ's with a pre determined set list... what's the point? It's interactive... In all, l try to bring the ambience of the room into my own musical home, it mostly works.”

I managed to grab a quick Q&A with the go-getter trend-setter about his love of Soulwax and how a meeting with director Stephen Frears turned into handbags at dawn after 2 bottles of vino.

On a scale of 1 to 10, how many people pronounce your surname correctly?

I can imagine John Cusack in High Fidelity putting on 'Horses' in his shop and saying, 'I will now sell 5 copies of 'One Born Every Minute' by Rocks Kings Castle. Have you had anyone request to use your music in film?

"I've had some independent film syncs and some choice TV. I was approached by Stephen Frears but we fell out during the consultation period. Too much wine!"

The Baroque night looks like the sort of swanky event that would happen on the Titanic if it set sail today. If you DJ'd on the Titanic would you continue playing until you were completely submerged in water, or would you attempt to fashion a make shift raft from your decks?

"I would have taken my wax (1912 pre dated the phonograph by 13 years) cylinders and melted them into a life hula."

Have you been to the Casino in The Playboy Club and asked to borrow someone else wife for luck?

"No, but I have been asked to hover around for luck."

I noticed they have piano nights at The Salvatores Bar. Have you ever turned up drunk, ejected the player from his seat just so you can play chopsticks?

Have you ever had a girlfriend threaten to smash up your record collection?

Was Soulwax right, are there too many DJ's?

Would you or have you ever owned a T-Shirt with a turntable on it?

"I've not yet reached that peak of my career."

Do you take requests once you're behind the decks? And has anyone ever asked for 'DJ Culture' by the Pet Shop Boys.

"Yes, I open my set with that particular gem."

When can we expect to see Roses Kings Castles back on the road again? 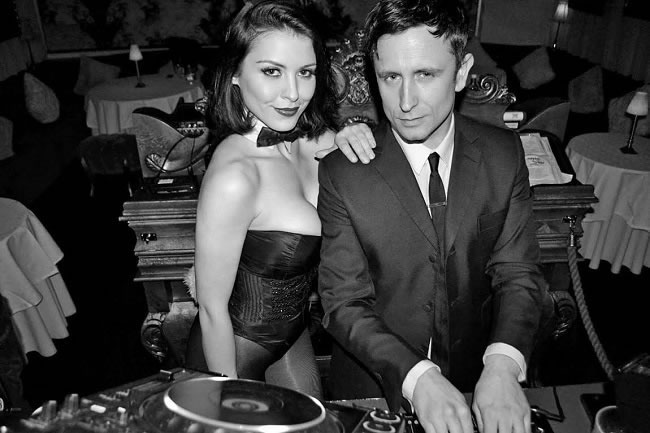 “The Playboy set is a complete musical evolution"