Written by Menswear Style in Books on the 13th February 2015 / Cycling Stars, a Trump Card Game 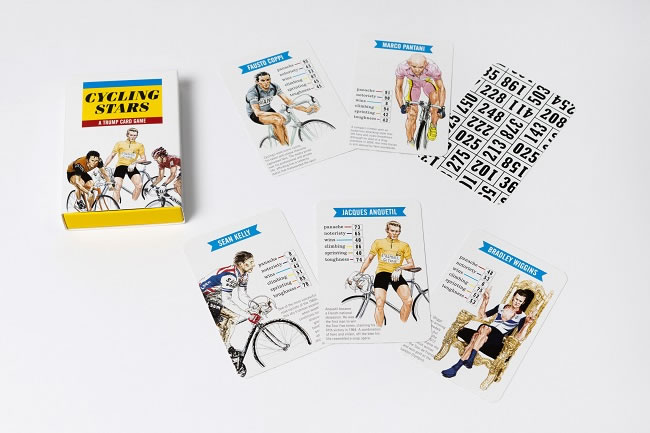 Cycling Stars by Claire Beaumont, illustrated by Rupert Smissen allows fans of the sport to pit their favourite cycling heroes up against each other. Ever wondered who the toughest rider of all time is? Who is the fastest cycling sprinter the world has ever seen? Would the racers of the 60s beat the champions of today?

With Cycling Stars, you can put these long-standing debates to rest with this collection of illustrated trump cards featuring 30 cyclists from the competitive sport from years gone by, including Eddy Merckx, Mark Cavendish and Bradley Wiggins.

We sat down with the woman that put this neat game together, Claire Beaumont, who works as a lead creative at London-based bespoke bicycle manufacturer Condor Cycles. She has also written for many publications including The Ride Journal, Cycling Weekly and Cycling Active. 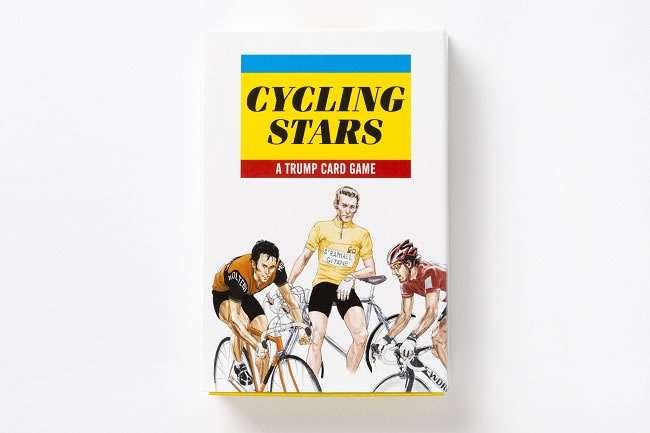 You’ve written for quite a few cycling specific publications, where does you love of the sport come from?

“I think my dad forcing us as kids to watch the Tour de France on Channel 4 at 6pm rather than letting us watch something normal. He'd explain the tactics and that the race is like a game of chess with a riders or team manoeuvring their way in for the final attack, then there would be a high speed crash which would always draw us in. His main love is endurance classic car racing, he wasn't a competitive cyclist or anything like that. I think the tactics of the tyre, engine wear and fuelling adds another dimension to car racing and the Tour de France is similar in that respect since you can't just go out from the gun because the next day you'll be on your knees.”

What advice would give men wanting to join the MAMIL club?

“Get into a pair of cycle shorts, they’re a bit weird but your bum will thank you. There are so many people cycling now, you won't stand out like a sore thumb, and don't worry it isn't all day-glo spandex, there are great brands like Vulpine, Rapha and Paul Smith making brilliant pieces that transfer from bike to pub. Then take your bike into the hills, the Alps or even Box Hill - riding up the roads of the professionals is a great experience.” 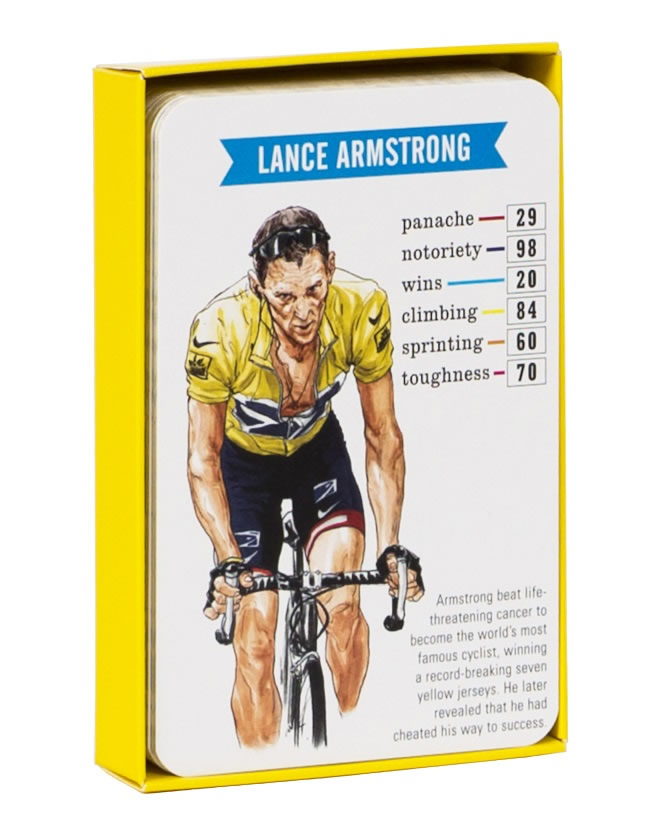 Cycling seems to have boomed in the recent few years, why is that?

“I think it’s the combination of many factors all falling into place at one time, a travel card in London for the year is the cost of a bike. A few years ago it looked like fuel prices would hit the £2 per litre mark, so people looked at alternatives and then realised that cycling wasn't so bad and wanted to do it more, not just on the way to work. Then Sir Brad Wiggins absolutely destroyed everyone in both the Olympics and the Tour de France and it opened up cycling to everyone, it was no longer cloak and dagger, niche and unexplained. Finally, it’s a sport that you can just go outside and do, you don't need a venue and you don't need to book, and unlike running you can freewheel and chat rather than panting along.”

Who’re your personal top 3 trump cards and why?

“Jacques Anquetil - An icon of the 50/60s. He's cool, calm and calculated. Stylish and charming. Post-race he'd whip out a comb he kept in his jersey pocket and fix his hair before making his way to the podium or giving interviews."

"Lance Armstrong - he deceived the world and pretty much everyone hates him but... those seven years when he was winning the Tour de France, he made it fun to watch - from crashing through fields to avoid fallen competitors to getting taken out by straps on fan's cameras, he feigned illness in interviews to throw people off. He once gave his pro cyclist Jan Ullrich the coldest death stare ever, you almost see his rival stop pedalling in shock and then Lance goes on the attack up the mountain, leaving everyone in his wake."

"Johan Museeuw - probably the epitome of day-glo cycling style of the 90s, he even wore a bandana. His terrible fall in one of the toughest races, the Paris-Roubaix left fans with their heart in their mouths. The Belgian shattered his knee when he lost control on the mud splattered cobbles. The injury turned into a dangerous infection and he nearly lost his leg. He fought back and resumed cycling after a long healing process and won the race that threaten to end his career. The illustration in Cycling Stars shows the moment he won, he's raising the leg he almost lost.”