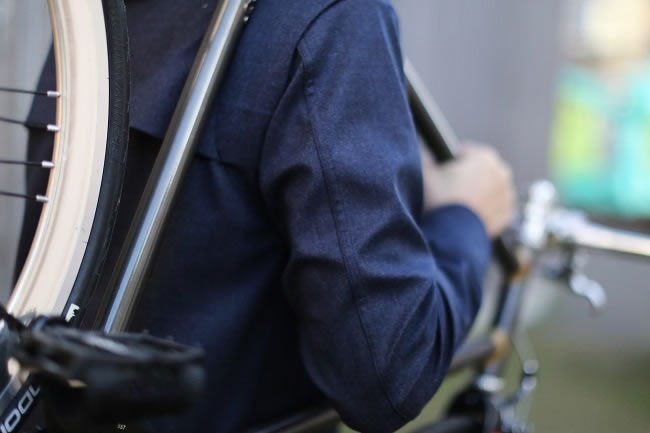 With the nights drawing in since the clocks fell back, cyclists up and down the country will have been tweaking their commuting routines to include additional safety precautions - most likely involving lights and fluoro strips or high visibility clothing. This autumn we've been fortunate enough to be wearing new British cycling clothing brand, Lumo's, Herne Hill Harrington jacket to keep us warm and safe from the hazards of dusky mornings and darker evenings. Lumo burst on to the cycling clothing scene via an extremely successful Kickstarter campaign and have developed a modest range of high quality cycling apparel for both men and women; along with a selection of cycling accessories including a bag and cap. Lumo aim to take inspiration from classic British fashions and integrate them with wearable technology to make your daily commute both stylish and safe.

The headline act on the product range are strips of LED lighting which, when switched on flash to alert road users of your presence. The Harrington jacket includes an LED strip running adjacent to the front zip, along with a further strip placed along the bottom of the rear of the jacket. The front lights up in fluoro blue colour with the rear flashing red. There are two light settings - high energy pulse and low energy flash. Sounds great, but I bet you're wondering whether this makes you look like an illumination better placed outside a Vegas casino? Well, the answer is an emphatic no! Both strips of LEDs are cleverly concealed with a tightly webbed fabric making them invisible until switched on. The strips are also neatly designed to flex with your movement, meaning that the jacket isn't stiff or rigid. 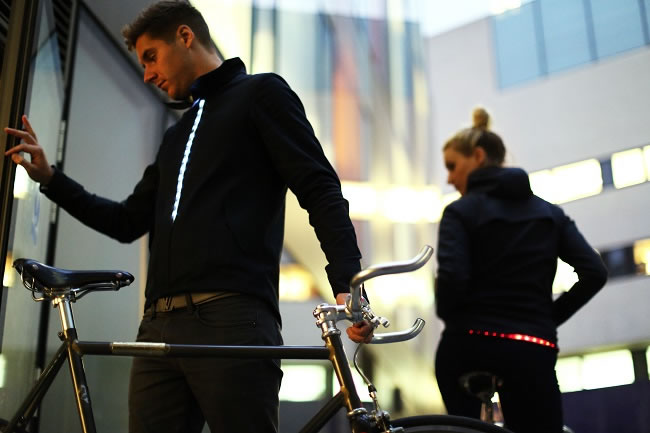 The lights are powered by a lithium polymer battery which is removable and re-chargeable. The battery connects to the lighting strips via a cable which is routed into an internal pocket. Charging is as simple as charging your mobile phone and the battery itself is no bigger than a zippo lighter. Each charge will last between 6 and 14 hours dependent on the setting you're using. The battery also features a button to turn the LEDs on and off - this sounds simple and practical but we had considered that we may have to keep connecting and disconnecting the cable prior to receiving our jacket! The design of the jacket is really smart - a sharp cut in deep navy with contrast red and white polka dot detailing on the pocket and zipper flaps. It's a small touch but it also comes delivered in a re-usable zipped pouch with full instructions, warranty and charging attachments. 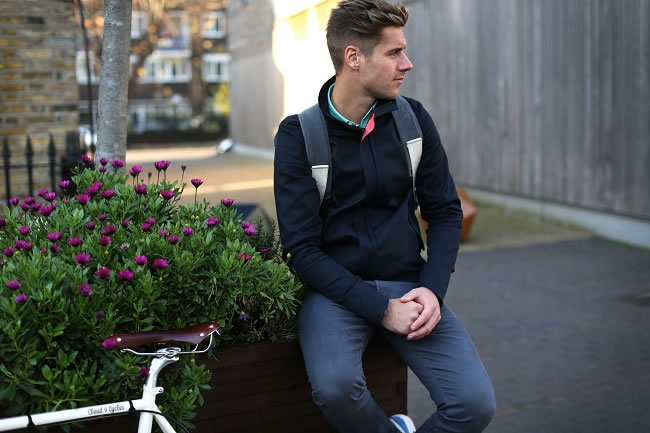 We've been trialling a size medium which is a great fit (I'm 6 ft. tall and of average build). To a cyclist - it's obvious that the jacket has been designed to be worn on the bike. The hem on the back has been dropped to cover your bum in damper conditions, there's a pocket to the rear - handy for your multi-tool or spare tube, and there's elastic strips sewn into the shoulders and cuffs to aid movement and stop the chilly autumn air from getting up your sleeves. However to the un-trained eye it's simply a smart, slim fit jacket being worn about town - it could be dressed up with a formal shirt and shoes for an after work drink, or thrown over your t-shirt and jeans as you nip out to grab lunch. 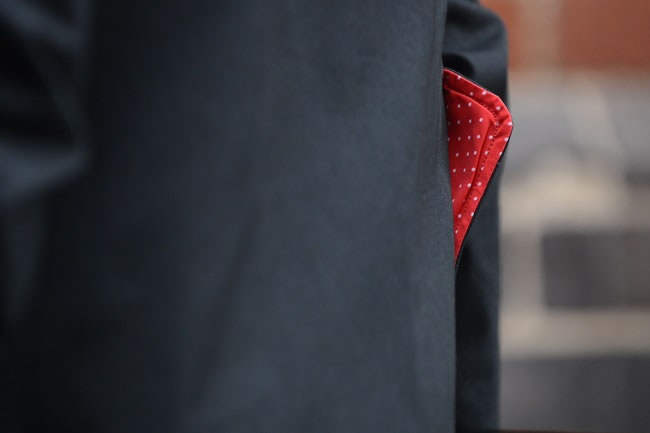 Not only does it include lighting tech, the jacket also features water resistant, stain repellent, breathable fabric which is comfortable in temperatures from 5 to 20 degrees Celsius. We've been wearing it in an unusually warm autumn to date and it's performed really well - regulating temperature whether we've been pedalling hard or free-wheeling and weaving through traffic. Care is relatively straightforward too - we've already touched on the removable battery and stain repellent fabric, but the LED strips are also fully waterproof and washable in case you hit some serious puddles on route. 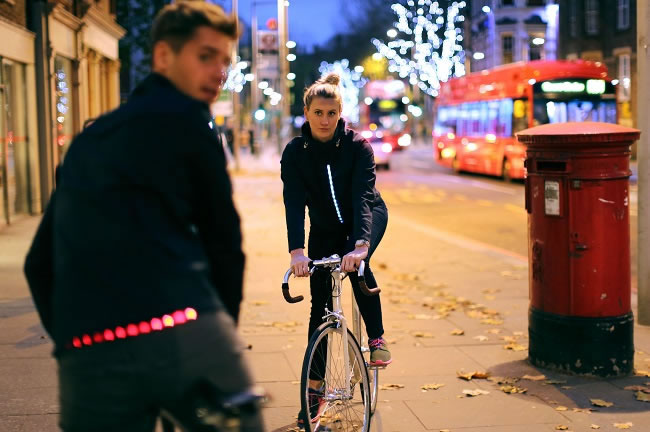 Taking all of this into account, it appears that Lumo have fulfilled their ambition of maintaining style whilst enhancing safety. The LEDs allow you to have all of the benefits of a fluoro strip high visibility jacket, without the obvious fashion faux-pas' that these carry. The jacket is transferrable from the road, to the office, through lunch and on to a bar or a restaurant afterwards making it a truly practical chameleon.