THE PRO_CEE’D REBORN, MORE BEAUTIFUL THAN EVER BEFORE 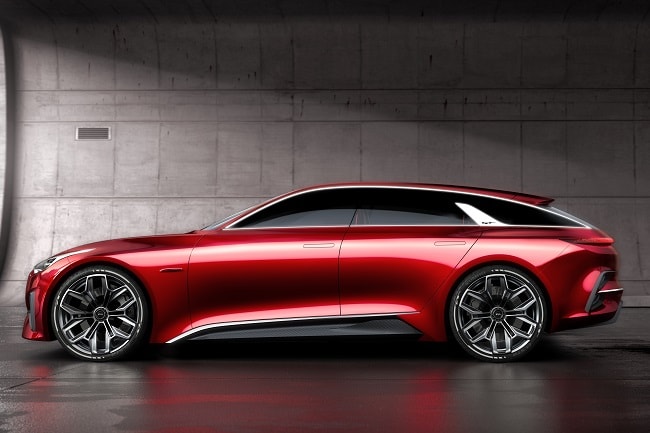 Kia Motors has unveiled the Proceed Concept at the 2017 Frankfurt International Motor Show. Making its world debut in Frankfurt, and designed at Kia’s European design centre just 500 metres away from the Kia stand, the Proceed Concept indicates what the next-generation cee’d could look like. Gregory Guillaume, Chief Designer Europe for Kia Motors, commented: “The Proceed Concept is our bold and engaging vision for a potential member of the next generation cee’d family. Embodying the spirit and athleticism of the current pro_cee’d, the Proceed Concept is an extended hot hatch that encapsulates Kia’s performance spirit. It’s an ambassador of all our emotion, our passions and our dynamic values. It’s the pro_cee’d reborn, more beautiful than ever before."

“The pro_cee’d has always been Kia’s performance halo model in the cee’d family. Since its debut in 2008 it has embodied all our driving passion, and the model that succeeded it in 2012 extended this dynamic lineage. However, with many European drivers seeking alternatives to the traditional three-door hot hatch, we began thinking about a new halo model. “The extended hot hatch you see here could be an alternative for us. It’s a third body type - one that retains the athleticism of the pro_cee’d, but reworked and reimagined to combine a striking new visual presence with a dash of real-world versatility. The Proceed Concept is our vision of how the vibrant spirit of the pro_cee’d could be reincarnated and revitalised for a new generation of drivers,” continues Guillaume. 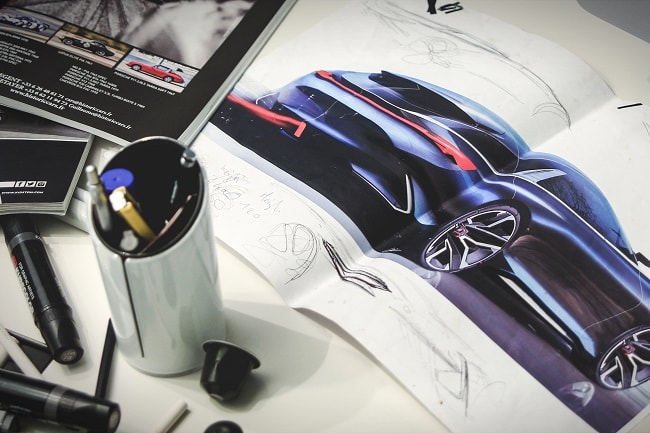 Low, lean and lithe, the five-door Proceed Concept marries its imposing proportions with a compact footprint that hints at its outright agility. The silhouette of the car is complemented by a series of distinctive design cues. The highlight line that frames the glasshouse extends to the rear tailgate, enhancing the car’s dynamic proportions. Together with the glass roof, the acutely angled ‘Sharkblade’, complete with GT logo, reinforces its lack of B-pillars. This in turn emphasises the dramatic roofline as it flows in to the rear shoulders. Lateral strakes further exaggerate the Proceed Concept’s slim waistline, and lend an air of muscularity to the rear of the car. 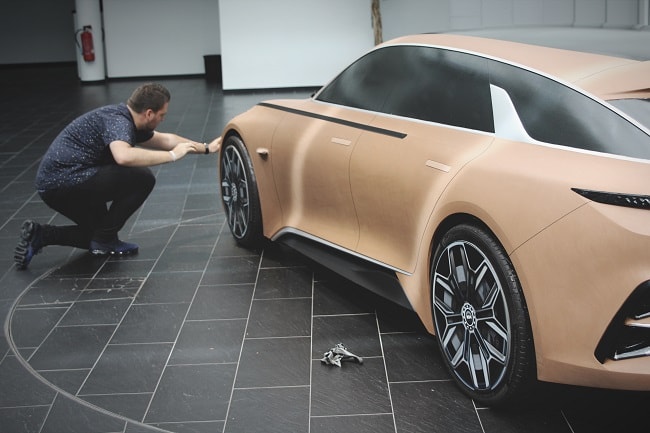 Daytime running lights have become a key element in a car’s identity, helping other drivers easily identify Kia models, by day and night. However, in low light conditions, cars viewed from the side often lack bold design cues. The Proceed Concept uses light to highlight its fastback shape. Guillaume comments: “This inspired us to take a step further and develop what we call the ‘Luminline’ – an illuminated outline of the Proceed concept’s glasshouse that greets drivers as they approach the car. This serves as a powerful nocturnal visual identifier when the car is on the move.” 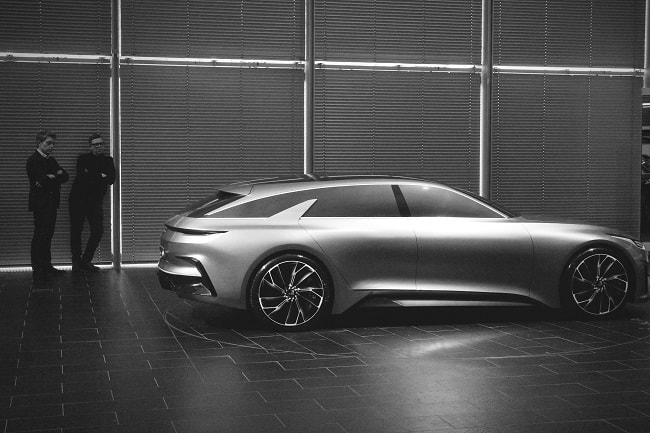 Further tactile and visual highlights include atmospherically backlit headlamps in red, stacked rear air vents, and large six-spoke, 20-inch alloy wheels with central locking nut. The rippled surface of its rear light strip is inspired by molten ferromagnetic metal. Its stance and proportions may be new, but the Proceed Concept features many of Kia’s now familiar design motifs. The iconic ‘tiger nose’ grille, the sculpted ‘island’ bonnet inspired by the Stinger, the castellated windscreen, the full-length roof glazing, and Kia’s inimitable mix of curvaceous sheetmetal and taut creases. Each element singles out the Proceed Concept as a truly modern Kia. The body, including the low-mounted ‘Wingcams’, is coated in unique Lava Red paintwork. The result of a highly complex, week-long paintshop process, Lava Red combines 19 hand-applied layers of black, chrome-effect silver and red tinted lacquer for a glossy and lustrous paint finish. Incredibly sensitive to changing light conditions, its depth and metallic sheen further enhances the contours and curves. 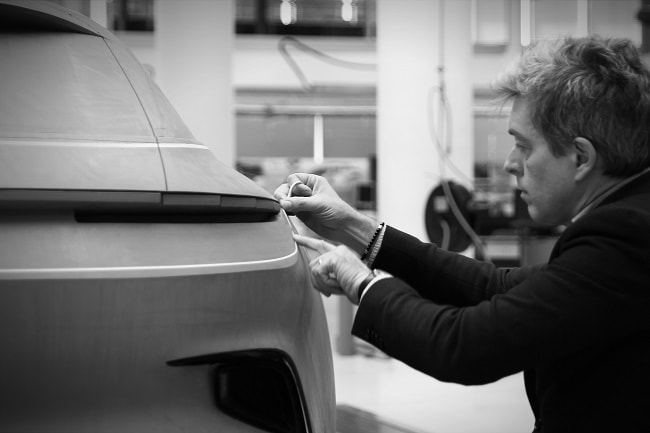 “Colour and trim played a key role in the development of the car, and our discussions on the look and feel of the Proceed Concept’s cabin took place at the same time as our talks on exterior form. The two dovetailed together perfectly, which is not always the case,” explains Guillaume. “Inspired by the world of bespoke tailoring and haute couture, we decided on a truly unique cabin environment enriched with materials used in innovative and unconventional ways – methods that might be familiar to fashion houses, but not in the automotive arena.” The seats are wrapped in more than 100 metres of black elastane fabric, cut, trimmed and tailored by hand to create rippled and ruched upholstery, producing a striking contrast with the sleek and shiny instrument panel. 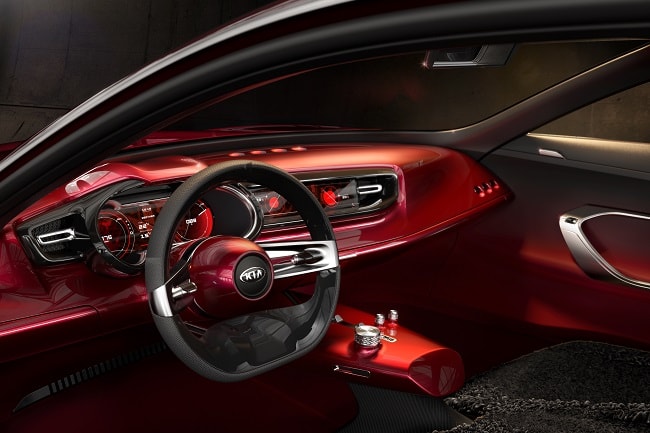 The Lava Red bodywork creates a bold visual link between the exterior design and its interior. Inspired by the visceral power and drama of an erupting volcano, the cabin’s striking colour palette combines fiery reds higher up with charcoal greys and velvet blacks further below. Finished in the same Lava Red as the bodywork, both the dashboard and steering column create the impression of the bonnet flowing into the cabin. The door linings are covered in glossy hand-painted fabric, graduating from solid black near the window line through to reflective red in the footwells. 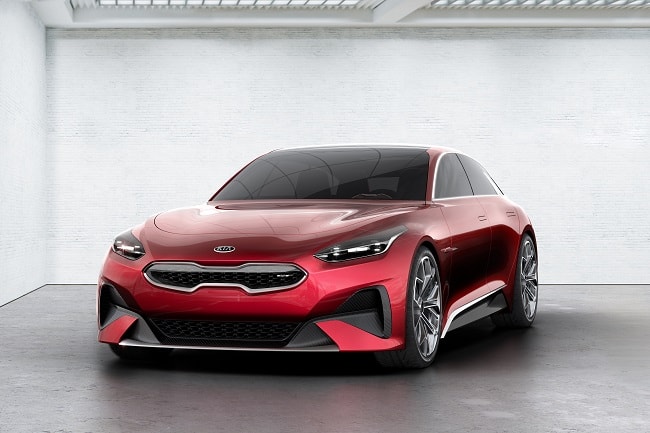 The instrument and horizontal infotainment panels illustrate three intuitive, colour-coded driving modes – Lava Red for ‘GT’ mode, Forest Green for ‘Eco’ mode, and Ghost White for ‘Autonomous’ mode. The four individual, interlinked seats feature a contoured welcoming wave – a hat-tip to the Kia Provo Concept, unveiled at the 2013 Geneva Motor Show. The split backrests of the seats are held in place by metal exoskeletons to reinforce a sense of structural strength and material lightness. The concept of combining lightness and strength is carried through to the minimalist and intelligently configured floating centre console. This clean and ergonomically-designed unit houses the aluminium controls, which draw inspiration from the haptic, machined actions of top-end audio controls. The uncluttered console is itself supported by a visible carbon fibre spine that runs the full length of the car’s interior. 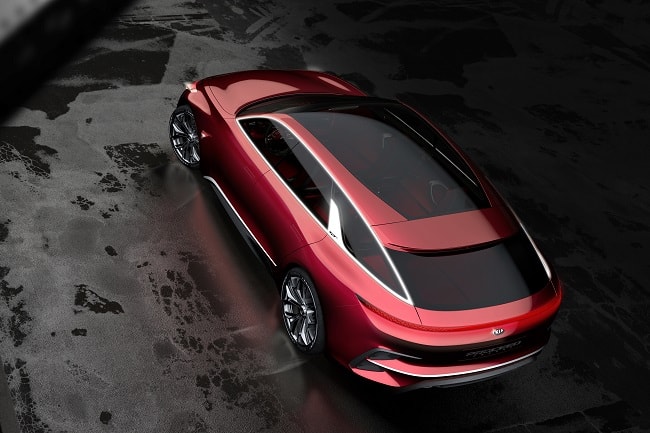 The Proceed Concept is a car that unashamedly appeals to the heart of the driver. While Kia embraces the future, it also knows how important it is to treasure the past. Performance cars are all about indulging the senses, and smell is the most powerful sense humans have for evoking memories. Guillaume and his team has recreated the ‘Memory Bank’ for the Proceed Concept – a flush-mounted shelf housed within the dashboard, containing a trio of evocative aromas. “Each of these three engraved flacons contains a scent synonymous with power, passion and performance; aromas that any petrolhead will instantly recognise,” describes Guillaume. “There’s the warm musky smell of aged leather, the oily fragrance of a garage that’s home to a classic car, and the tang of high-octane motorsport fuel. This is about automotive passion and the love of car culture.” 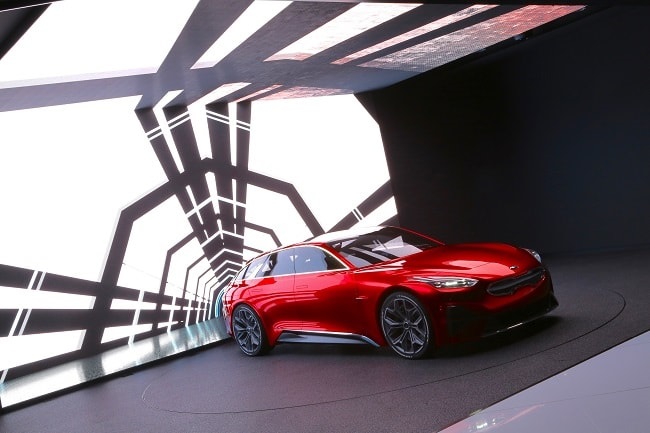