THE RUGGED HISTORY OF TWEED FABRICS

A MATERIAL ORIGINALLY CALLED “TWEEL” FROM THE OUTER HEBRIDES 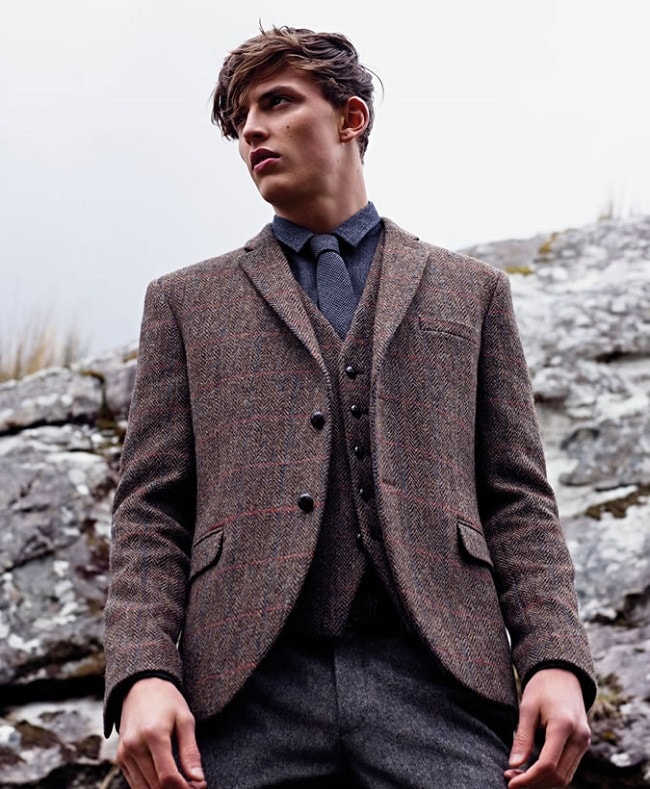 It’s rugged looking yet refined, featuring a vast range of woven check patterns originally meant to blend in with the Scottish landscape: Tweed, when you give it some thought, comes with tons of history and associations. For those not entirely familiar with it, it’s best known as the material of the British aristocracy’s leisurely pursuits. Or, you think of it as fabric used for early 20th century golfing and cycling activities. More recently, Tweed has turned into a somewhat gentlemanly material that hipsters have ironically appropriated for its retro appeal. But, through whichever lens you view Tweed, the fabric, in its most general form, is a heavyweight, woven woolen cloth, frequently displaying a check pattern, that started out as an outerwear staple. Now that it’s coming back into style through AW17 collections from J.Crew, Stella McCartney, Ralph Lauren, and Sacai, we review its history and its many variations.

As the legend goes, Tweed originated with a copy error: A merchant receiving material originally called “Tweel” misspelled it in his documentation, confusing it with the Scottish river Tweed. As such, many, even to this day, believe the fabric came from this region. Rather, Tweed – initially, a rough, thick cloth similar to modern-day felt – originated in Scotland’s northwest region – the Outer Hebrides, to be exact. Developed centuries before its popularity took off, this hand-woven material had been purely practical – a water-resistant, warmth-retaining fabric that helped islanders handle the Hebrides’ harsh winters. By the 18th century, the Hebrides had their own cloth-making industry that began exporting Tweel to the Scottish mainland. 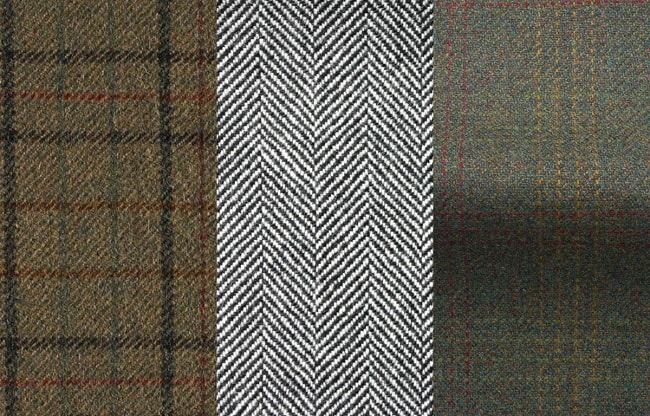 Yet, historians point to the 1830s as the point when Tweed fabrics started gaining popularity. Inspired by Queen Victoria and Prince Albert, members of the Southern Aristocracy would rent or own a sporting estate to hunt or stalk and, in accordance with Highland traditions, would outfit their estate staff. The only problem was, Clannish tartans were off limits to the aristocrats, so the estates had to develop their own materials. What manifested eventually were two basic types of Tweed: A Clan Tartan, usually more plaid based, that acted more as a family crest, and an estate Tweed, a style similar to modern checks, that identified individuals of a particular estate, regardless of family relation. But, since estate members further used the latter for outdoor wear, its colours had to specifically blend in with elements of the Scottish landscape, particularly the woodlands, mountains, and heathers. Essentially, Tweed, even in its brightest assortments, functioned like modern-day camouflage, with sharp style thrown into the mix. 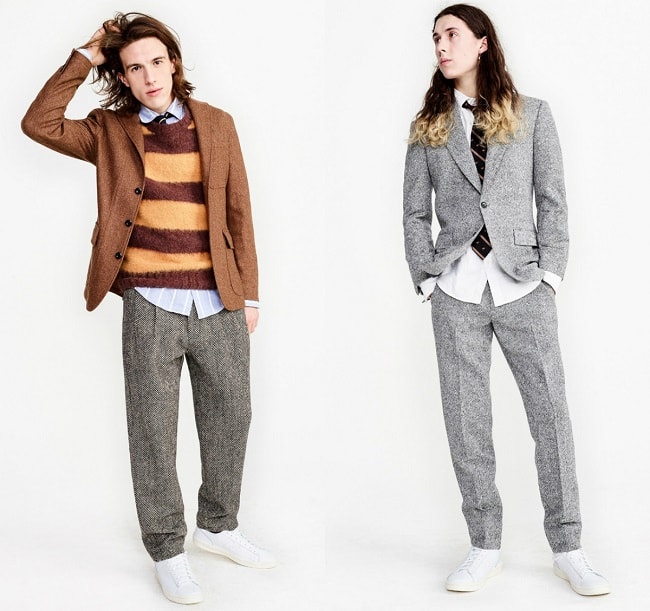 From here, modern day “estate Tweeds” – still used for manufacturing this cloth – emerged, with the first allegedly being Glenfeshie, commissioned by Miss Balfour of the Highland Estate of Glen Feshie. Using the then-standard Shepherd check, itself a small-scale dogtooth pattern, this variation infused the traditional black and white with a red overcheck. By the 1840s, the use of blended-colour fabric for hunting, fishing, shooting, and even military uses became commonplace. And, it’s said that, during this decade, Lady Dunmore introduced Harris Tweed – an open, loosely woven twill with a rougher texture – to her aristocratic acquaintances. From here, it seemed that nearly all estate owners adopted the material for their staff. As such, this decade saw the emergence of the Gun Club pattern, developed in 1846 by the Coigach estate. Starting with the Shepherd check, this pattern – eventually taken on three decades later by a US-based shooting club, hence its name – alternated two darker shades with the default white. The Glen Urquhart also initially stuck with the black-and-white foundation, but later, after Prince Edward of Wales helped take the pattern beyond the British Isles, brown found its way as a subtle overcheck in the arrangement. Today, called just Glen check or Prince of Wales, this more intricate, multicoloured Tweed is typically used with lighter flannels, worsteds, or cashmere fabrics. 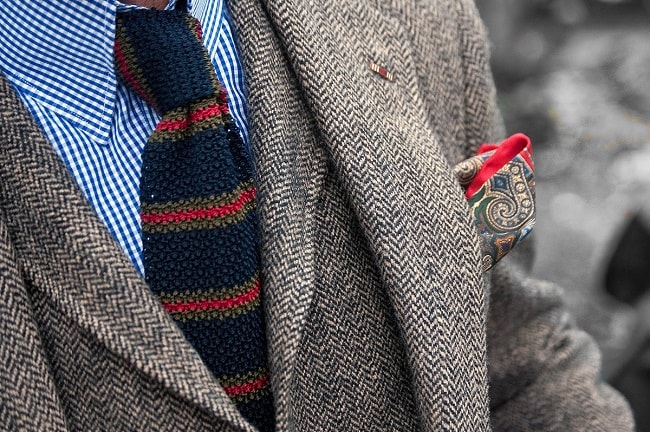 Lovat Tweed, introduced in 1845, might seem tacky or bright at a glance, but its mixed blue and yellow precisely camouflaged estate members in the surrounding landscape of heathers, bluebell flowers, bracken, and birch trees. The Elcho pattern, based on the Lovat, uses a similar marled knit and eventually became the basis for the London Scottish Regimen’s first camouflage uniform. The second half of the 19th century and first few decades of the 20th saw a trickle-down effect in terms of who wore Tweed. Victorian middle classes, now inspired by the aristocracy’s hunting attire, appropriated it as an all-around athletic fabric. Akin to today’s stretchy, moisture-wicking polyester active blend, it became a staple of golfing, tennis, cycling, and motoring attire and even joined adventurers as they explored some of the world’s highest peaks. But, understandably, athletes and hobbyists eventually went for more breathable, lighter materials. Thus, designers and fabric makers had to update Tweed to the changing preferences, introducing less-heavy weights and even more checks in the process. What stuck – and what’s perhaps the foundation for the modern Tweed suit – were Coco Chanel’s Linton Tweed suits. While Linton Tweed had been around since the early 20th century, the ‘60s saw the brand revive itself with greater pattern variety, bolder, more fashion-forward colours and cuts, and lighter fabrics more appropriate for officewear. 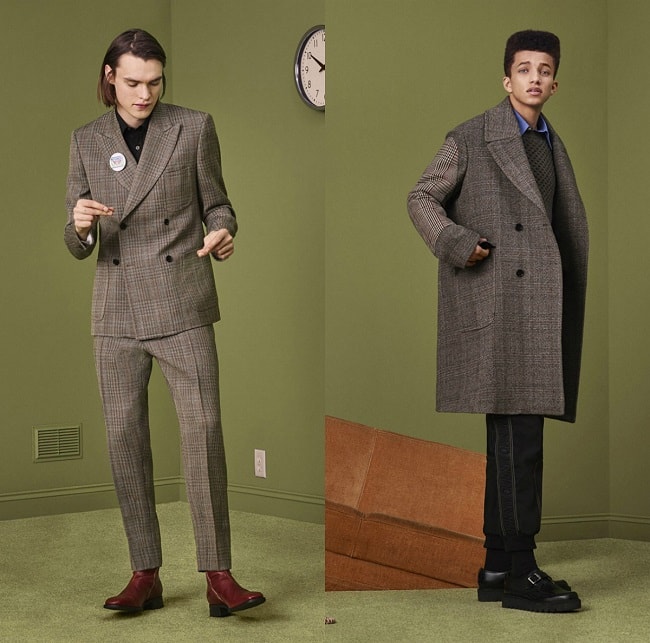 Yet, as is the case for many materials, Tweed’s popularity has seen peaks and decline. For instance, in 1966, Harris Tweed had woven and used 7 million yards of its namesake material; 40 years later, however, its output, partially due to mismanagement and ill-advised business decisions, amounted to just a tenth of that. Since then, the past decade has created another crest, bolstered and propelled forward by indie and hipster scenes and preppy designers giving the material a second look. The result, seen at various Fashion Week presentations this year, touches on its tartan-influenced, check-based heritage, gives off a classic Man Man-era gentleman character, and, going back to its origins, overlaps with gorpcore outerwear influences.

Through designers’ 20th century efforts to make Tweed lighter and, hence, more accessible, modern-day materials extend from the more traditional – wool based and hand woven – through updated fabrics, like silk- and cotton-based materials. In general, traditional, hand-woven varieties feel thicker and coarser, while machine-woven fabrics tend to be thinner overall. Yet, as you’re shopping around, you’ll run into the following types:

Overcheck Herringbone or Estate Tweed – With these two names used interchangeably, this pattern, encompassing the historical variations listed above, blends elements of overcheck twill and herringbone tweed to create a two-tone, dogtooth variation. 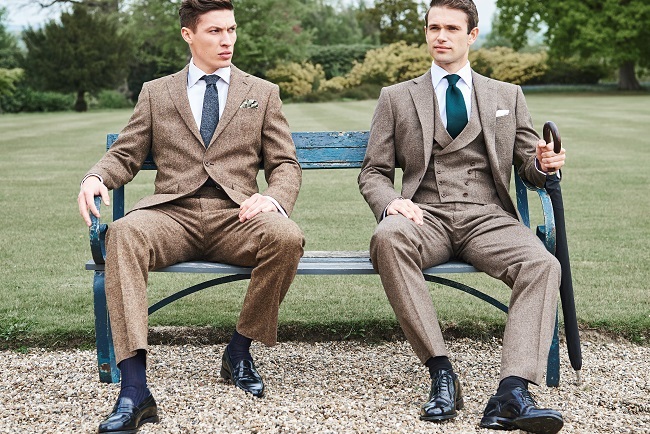