ICONOGRAPHY AND SYMBOLISM OF THE AMERICAN DREAM 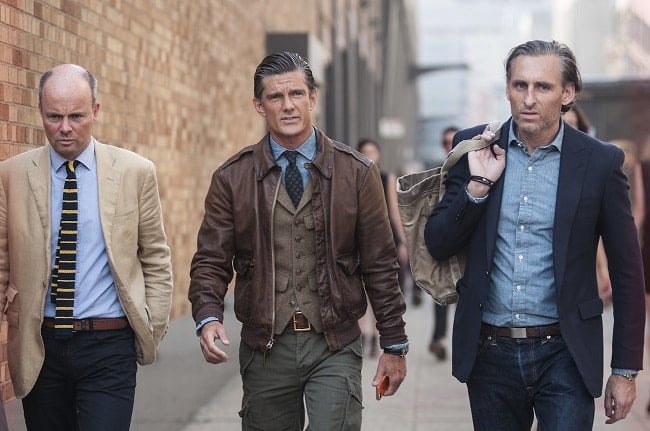 If you connect the dots between SS18 and AW18 Fashion Week presentations, across both men’s and women’s collections, Americana comes out the greatest, clearest theme. While not every designer’s enamored with the concept, cowboy-themed pieces, denim’s resurgence, and ideas that both redefine what it is to be a modern-day American and examine the current political climate all come forth in varying degrees. Some are pure inspiration, others a fetishisation for the past, and a few become a critical eye through the seemingly frivolous lens of fashion.

So, if everyone’s talking about Americana, how do we define it? In its simplest form, and one that’s been kicked around since the Japanese explored their own idea of Americana decades ago, the concept boils down to iconography and symbolism of the American dream. Visually, this collection of stereotypes, based more so on movies’ and pop culture’s ideas of the American Midwest and the freedom of the open road, frequently ties in classic denim – none of that modern-day stretchy stuff – and lots of American flag prints, with figures ranging from cowboys and clean-cut sports stars to James Dean used for inspiration. Think of the first few years of Lana Del Rey’s career, and such an on-the-nose interpretation is what designers generally end up with. 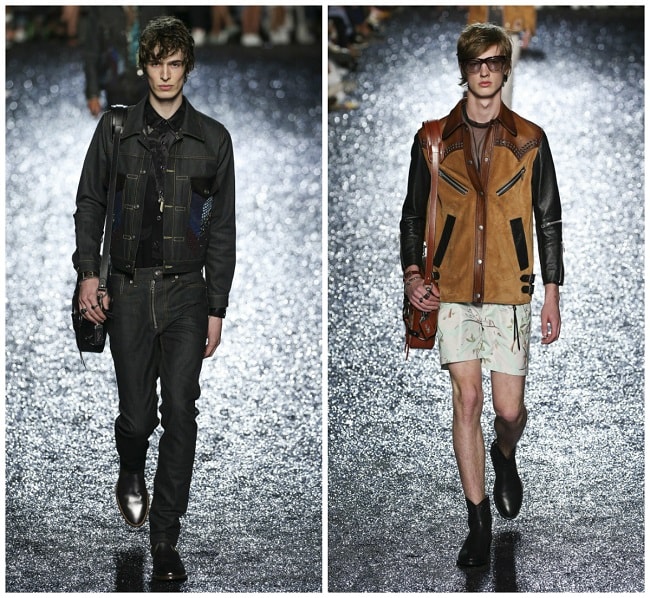 On the other hand, Del Rey’s singles like “Video Games” and “National Anthem” came out during the Obama presidency – eight years with the appearance and feeling of progress. The seemingly idyllic ‘50s could be looked at in hindsight, through the lens of nostalgia, music, and film, without any analysis of the decade’s shortcomings. Trump’s election at the end of 2016 shifted everything around, and soon enough, speeches about building walls and bringing back factory jobs looked like a direct pull at reviving America’s supposedly powerhouse past. Yet, that past involved a heavy dose of racism and segregation and fewer rights and employment opportunities for women. Thus, present-day Americana isn’t just a celebration of success and greatness; it further examines what lies below such a façade.

The type of Americana surfacing on the runways tends to be the same that you’ll find in US-based discount department stores: American flag tees, tanks, and western shirts, standard midrise denim, and, as the perfect amalgamation, denim shorts with Stars and Stripes accents. The only thing is, this latter group is less about romanticising the past and celebrating progress, but rather, a combination of patriotism and mass consumerism that swells up to July 4th and gradually dies away through the summer months. 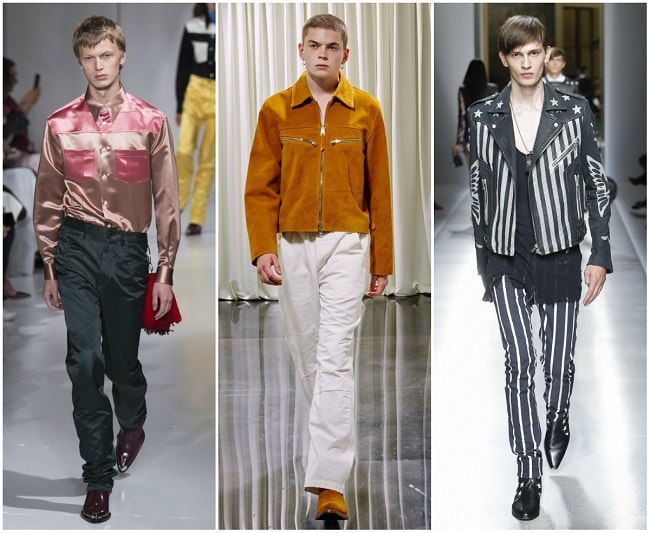 But, whether you’re trying to emulate a runway model in cowboy garb or you’re shopping on the 90% off rack, this version of Americana operates in symbol form only: National pride, building something from the salt of the earth, independence, and former greatness. Indirectly, these signifiers manifest simultaneously as globalisation, mass production, and tackiness – everyone seemingly wants to be an American. Although those garish Stars and Stripes-printed bro tanks seem to dash assumptions, denim – and, specifically, the classic blue jean – doesn’t. We think of it as a specifically American-made product that’s being exposed, and is now manufactured, all over the world. As well, it’s a symbol that brings every American archetype together: the rebel, the cowboy, and the hard-working, self-made man. As a result, it embodies everything American, yet nothing specific, and brings that ambiguous brand of nostalgic patriotism to the runway without being too heavy-handed.

Between the literal symbols and what they mean lies with what’s presumed to be American identity. Americana – further often using imagery of highways, motels, the Midwest, or Hollywood – has played around with this, amassing a collective identity of the past and present that’s not specific to anywhere. It’s part New York, part California, and part Flyover Country, without representing any direct region or culture, beyond a fondness for the classics. 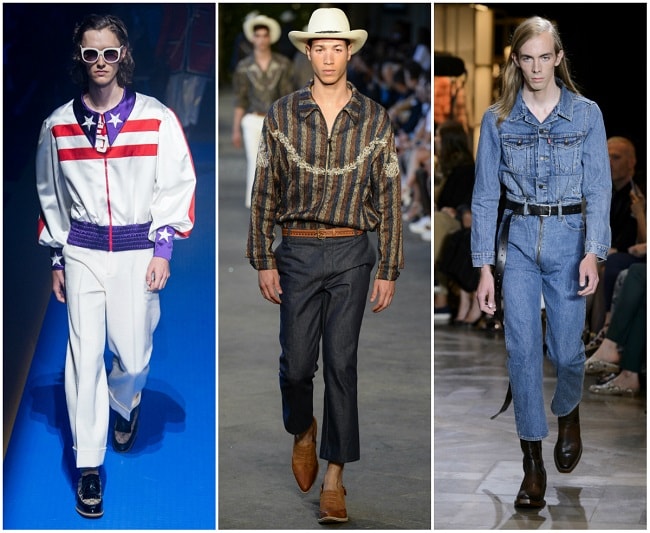 Yet, in the years following George W. Bush’s presidency, Americans started to fracture along party and regional lines: The coastal Democrats, and the blue-collar Republicans of the Midwest and South. The division not only reflects election results, but further emerges from cultural attitudes that run from the dinner table to your Facebook news feed. In response to this shift, designers have turned to Americana as a sort-of commentary. Balenciaga took it quite literally last year, combining distinct red, white, and blue shades with former Democratic presidential candidate Bernie Sanders’ imagery. Less defined, Raf Simons’ Calvin Klein show at New York Fashion Week set up a dichotomy that questioned Americana’s quintessential symbols: denim, cowboy boots, and other pieces of western garb appeared on models, while David Bowie’s “This is Not America” played in the background. During the presentation, he told W Magazine: "We're thinking about how to redefine American culture, particularly at a time like this."

Returning to the Stereotypes

So, who’s that American pushing westward, living off the land or building the railways? Few men like this actually exist in the present, but one of Americana’s core assumptions is independence – or, boot-strapping it, as they’d say today. And, nothing embodies bootstrapping than a man who heads into unknown territory to not just make it on his own but be successful, too. In this vein, Americana has come to encompass the image of the classic American worker – maybe a cowboy, factory worker, or someone working in the mines who, through sheer dedication and strength, makes it to the top. The result, fashion wise, has polished up workwear staples – denim jackets, work boots, flannel, and cotton duck pants, for starters – into rugged, everyday wear. 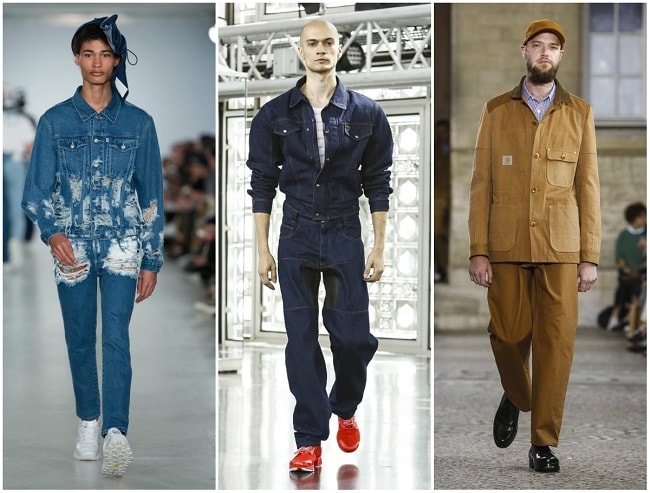 Yet, what might seem like the other side of this coin, Americana often brings in the preppy man. He, too, is a hard worker – books or business smarts, rather than pure brawn – or could represent that dedicated athlete out on the field – think of the Archie Comic characters, before they turned into the brooding teens of Riverdale. In any case, it’s a stereotype associated with seeming purity and earned but unmentioned upper-class status. The image, in terms of style, stays classic and minimal – solid or checked button-downs, V-neck sweaters, loafers, pleated, straight trousers, and the occasional varsity jacket. However, the preppy – and the shrewd businessman he’ll eventually turn into – has nefarious undertones. On one hand, the do-gooder who’s earned his six-figures soon turns into the well-connected finance bro who sold you a faulty mortgage or, worse, Patrick Bateman of American Psycho – the guy who embodies success superficially but spends his free time racking up a body count. As such, Simon’s AW17 presentation nods to Americana’s underside: Polished and plaid, with plastic-coated trench coats to clean up the mess it eventually leaves behind. 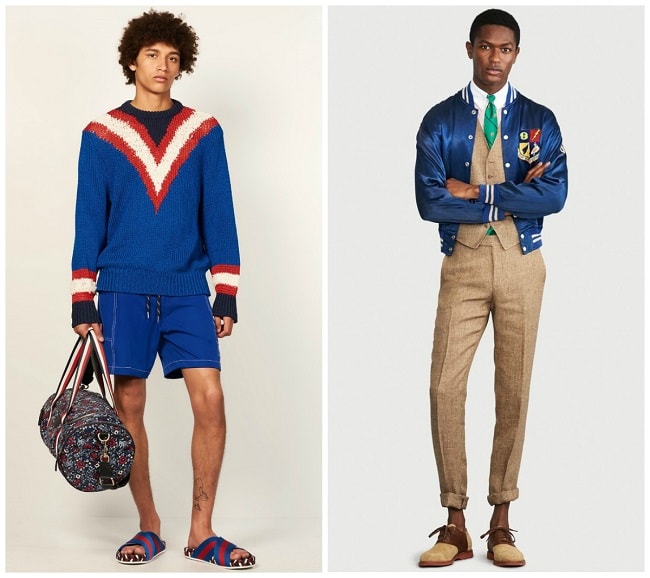