SHOULD YOU WEAR STATEMENT SOCKS?

ATTITUDES TOWARD SOCKS ARE RAPIDLY SHIFTING

Written by Ivan Yaskey in Trends on the 21st May 2018 / Should You Wear Statement Socks? 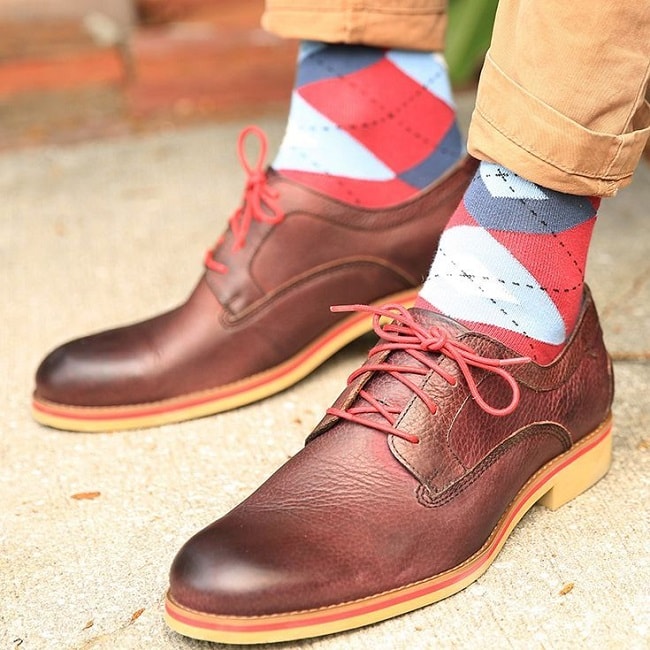 For men, socks have gone the way of the power tie: A way to break up the monotony of a corporate-approved charcoal suit and blue dress shirt. Flashed only at the ankle and often obscured by a structured trouser leg, a bold pop of colour or print hints at your individuality, especially when workplace dress codes squelch nearly all forms of self-expression on the job. Somewhere around 2013 or 2014, attitudes toward socks started to shift. At the time, NPD Research Group found that 73 percent of men wear socks every day, versus 41 percent of women, and on average, they’re more likely to spend more on a pair, regardless of whether it’s a casual or athletic style. Their popularity has only grown since, with statement socks now seen at both luxury menswear shops and discount department stores, crossing classic and trendy prints, and geared toward practically.

In another sense, the statement sock reveals that you can be formal yet still fun, professional yet understanding the boundaries of flair. Canadian Prime Minister Justin Trudeau generally provides the example for doing it correctly: For instance, during various appearances, he’ll show up in a solid-colour, well-fitting suit, yet accent it with a striped or check pattern around the ankles. Yet, aside from that now-viral Chewbacca print spotted at the Bloomberg Global Business Forum last September, the pattern doesn’t appear overly distracting – rather, it’s a splash of something extra, a print to break up the expected solid shades, and is less predictable than a pocket square. For men in 2018, even when you work in a more creative environment, the question remains, “Should you attempt statement socks?” as opposed to wearing traditional black, white, or navy or even foregoing them entirely, exposing your “mankles” in the process. However, if you’ve ever tried printed shorts, a bold-coloured shoe, or even men’s jewellery, a sock with an equally flashy print seems like less of a stretch. 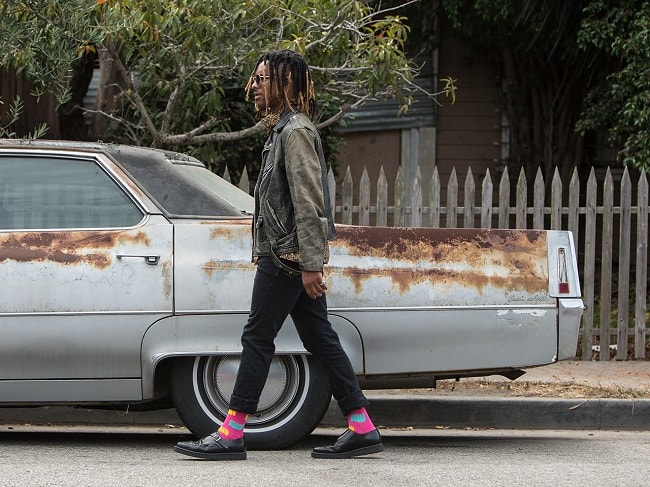 For decades now, the rules for men’s dress socks were simple: Dark shades and match them with your trousers. As such, black trousers called for black socks, navy for navy, and so on. It didn’t matter where you were: No one wanted to be the guy in the room sporting white athletic socks with his dark-coloured work getup. As workplace dress codes loosen, so have attitudes toward socks. Although these older rules still apply in suit-and-tie situations, a statement sock pushes the boundaries without bulldozing over them. Although someone like Trudeau toes the line between tasteful and tacky, the colour scheme makes it work: For instance, even the most gaudy, outlandish prints seem less so when you pair its shades with your trousers and footwear. 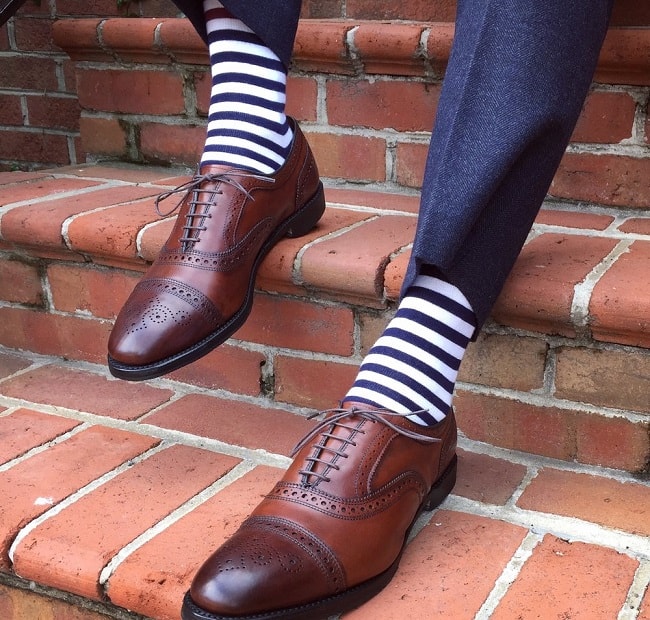 No, men don’t have the same degree of choices that women do, but the principle remains the same: A well-picked accessory or two transforms the most basic, standard outfits. Think of the navy suit with a paisley pocket square, or a bomber-tee-and-chinos ensemble with a snapback. In these scenarios, the accessory essentially makes the outfit, and statement socks fall right in line as a subtle but deliberate choice that adds a quirky character. And, adding that touch of effervescence isn’t such a challenge: Sometimes, a solid, bold shade or a striped print is all it takes.

With this last point in mind, the first step toward breaking away from the typical black-navy-charcoal trifecta is selecting another, less-standard solid shade – red, bright blue, royal purple, or even forest green often adds just enough emphasis. A nudge further, and you’ve got the classic print: Two or three shades for a hint of colour-blocking that’s rarely noticeable until you sit down. For a few examples, Thomas Pink’s stretches the spectrum from narrow to wider stripes while boldSOCKS.com does multiple variations on an argyle print. But, with statement socks having their moment, why be ordinary? Men’s socks now feature an array of geometric, repeating, and digital prints, or are intentionally branded – think Vetements taking a solid-white shade and adding its brand across in bold black lettering. As a fusion of these concepts, Vans has taken its recognisable checkerboard print, and applied it to an over-the-calf silhouette. 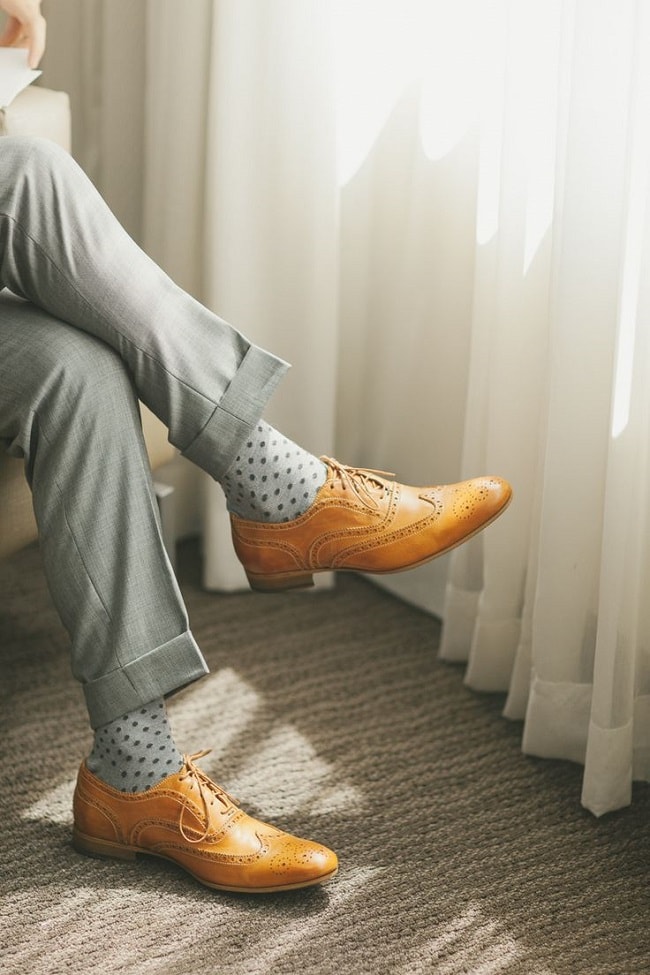 Yet, regardless of which print you select, the rules of power dressing still apply. Colours should reflect some element of your outfit – for instance, a purple-striped shirt with solid-purple statement socks. Or, select from a similar colour group – blues or reds and purple, in this case. If you’re deliberately creating a clash or contrast, let your socks be the only piece to do so. Otherwise, your ensemble ends up being too busy or, worse, looks like an eyesore full of distractions. On the other hand, there’s the question of how much sock to show. Ideally, even as you stand, they remain slightly visible – above your low-cut shoes and below a slightly cropped or rolled trouser leg. If the trousers go too high, however, it looks like you can’t dress yourself – or, worse, like you’re cosplaying an early 20th-century golfer. By contrast, if your trousers are too long or your footwear too tall, there’s almost no point in adding a print to your socks – no one, except for you during your morning routine, will actually get a glimpse.