ENCOMPASSING THE PARISIAN SPIRIT WITH CASUAL-CHIC AND EFFORTLESS STYLE 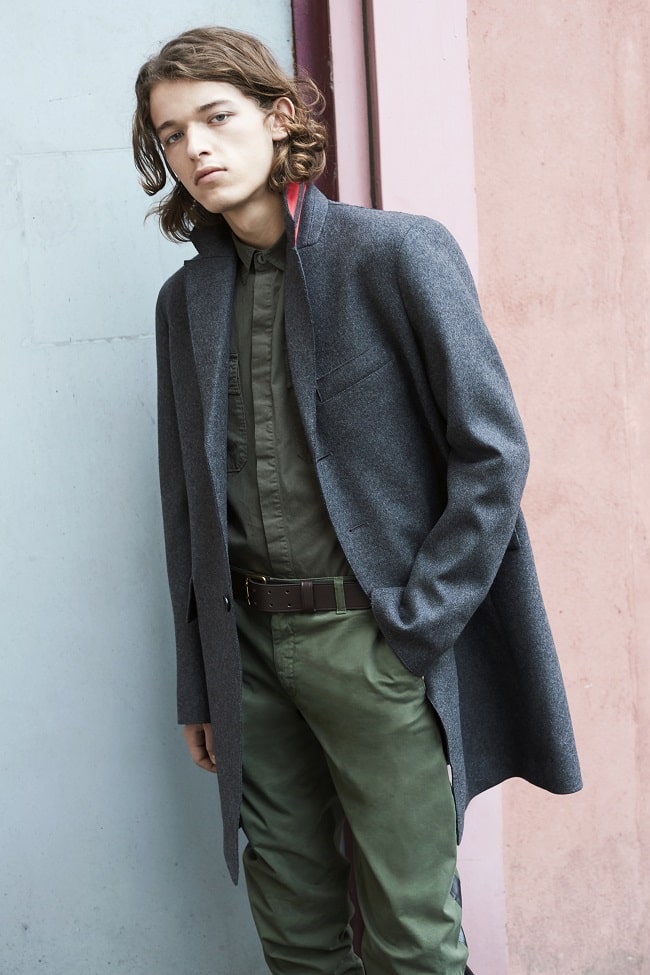 There are currently close to 400 Zadig&Voltaire stores around the world, so you might already be aware of the brand. If not, we are here to give you a bit of background to the company and possibly an understanding as to how they have achieved such impressive heights of success in the fashion industry. The Autumn collections are arriving in stores and we also take a look at what to expect in the fast approaching season.

The ‘house’ was established in 1997 by the French entrepreneur Thierry Gillier with his first store in the fashionable Saint Germain Des Pres, in Paris. With routes stemming back to the Lacoste family and his own parents owning a large collection of 17th and 18th century art, creativity already ran through the veins of Thierry Gillier from a young age. A graduate from Parsons School of Design, he originally set about joining forces with his brother and delving into the world of textiles. 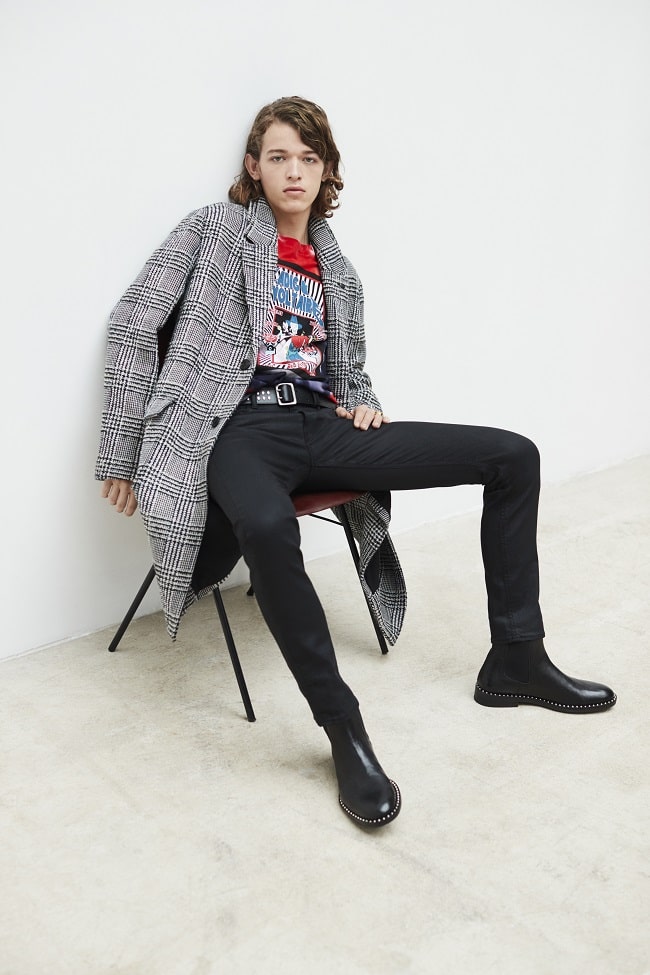 After parting ways, Thierry Gillier went on to form Zadig&Voltaire, with his inspiration stemming from the book ‘Zadig, or the Book of Fate’, written by Voltaire in 1747, where he discovered his admiration of the modernity and courage explored in the leading character. He started the company solely as a women’s brand hoping to ‘bring them closer to freedom, ease and autonomy’ with his clothing. It was only a few years later, in 2004, that Thierry Gillier decided to add a menswear collection which was soon followed by the addition of Swedish-born Cecilia Bonstrom as artistic director, who has aided the brand’s alternative outlook on luxury fashion. 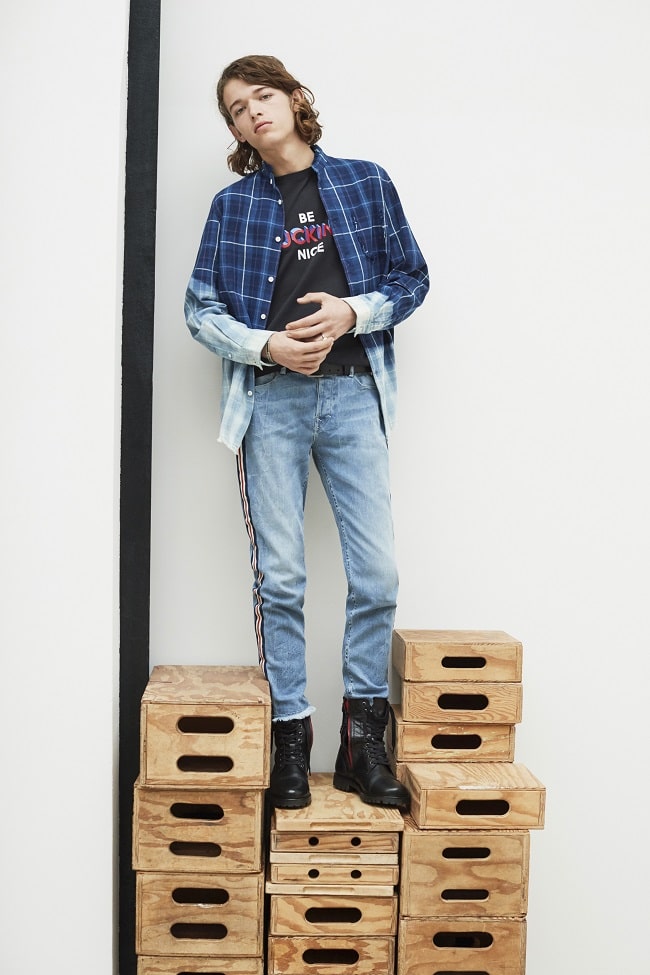 Zadig&Voltaire encompasses the parisian spirit with its casual-chic and effortless style. The founder started the brand with the intention of creating clothes that are easy and comfortable to wear and for some with a free-spirited attitude. They are clothes you can easily coordinate but with a nonchalant approach. The brand is aimed at the younger generation with their campaigns well-known for featuring model sons and daughters of celebrities; such as Gabriel-Kane Day-Lewis and Anwar Hadid. These familiar faces are often spotted on the front rows of Zadig&Voltaire fashion shows, drawing in further attention. Actors and sports stars are also fans of the men’s clothing range with the likes of NFL player Tom Brady and Jared Leto frequently spotted in various outfits. 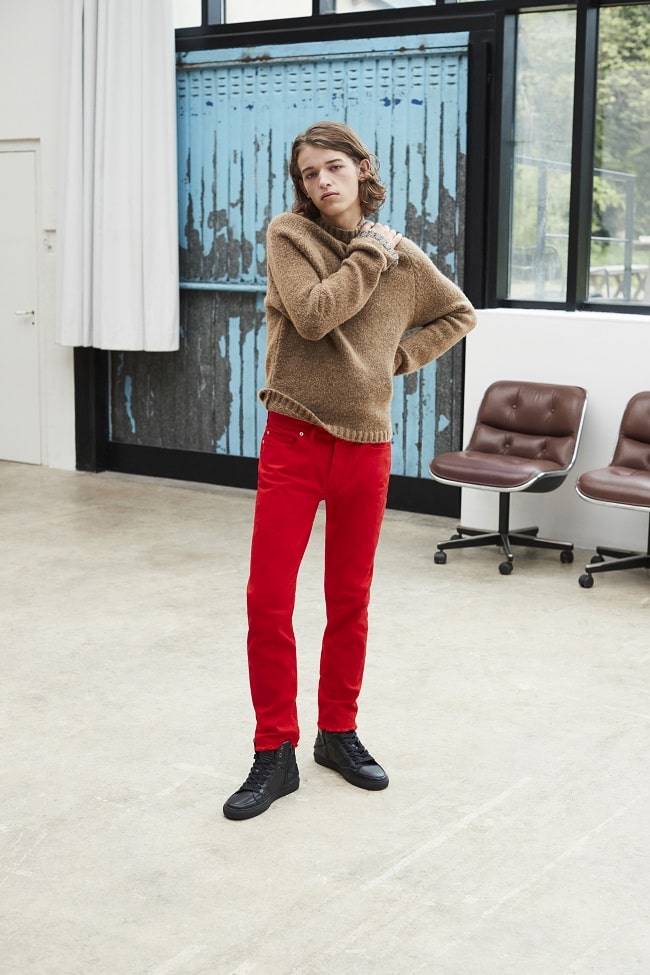 For the upcoming Autumn season, Zadig&Voltaire has continued to embrace the rock’n’roll strand of their DNA, however with a slightly more romantic style. There is definitely a look of James Dean to the collection with leather biker jackets layered over soft cotton simple T-shirts and loose-leg denim. And if you have previously turned your nose up to the prospect of ‘double denim’, it still remains for this coming season and you might think again with their more relaxed approach. There is a sense of military within the collection; a khaki shirt and trousers are seen with added army detailing, stylishly worn with a charcoal mid-length tailored coat to smarten the look. For the colder months, their soft polo neck knits (featured on the catwalk) are guaranteed to keep you warm. They can be worn on their own or as a layer under their selection of oversized outerwear jackets - again, adding to the typical Parisian cool tone. 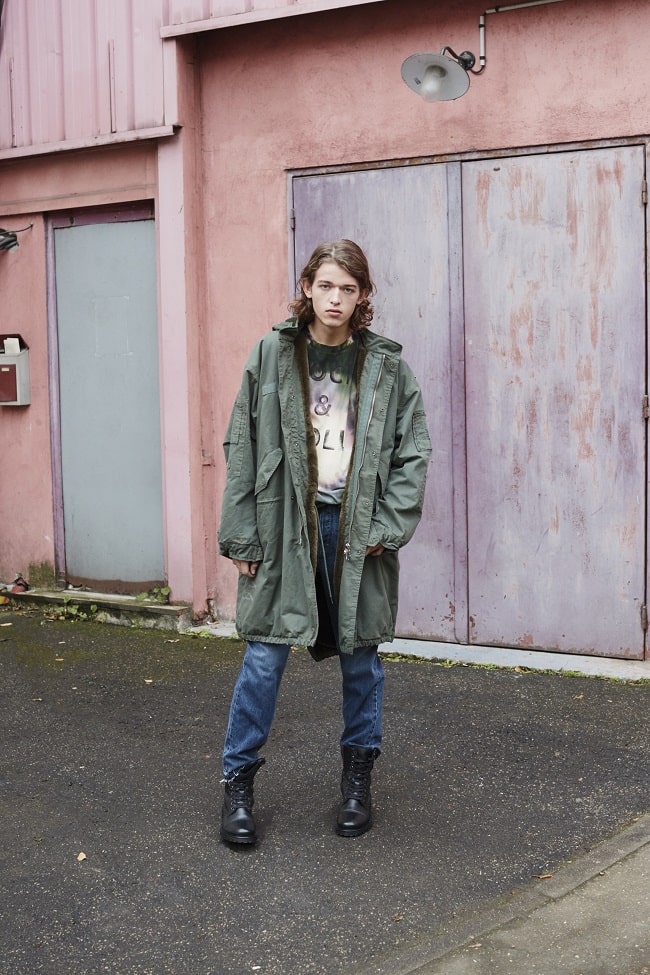 The autumnal muted tones of most of the pieces are offset by loud red and stark white denim, to be worn with simple t-shirts with the continuing slogans/proper nouns which Thierry hopes hit a note on the streets. The standout French phrase of “Je m’en fous” (translated as “I don’t care”) features on a variety of t-shirts, which clearly represents the general casual mood of the pieces. This brand is also admired for their popular lines of statement accessories including bags, scarves and men's jewellery. The footwear for Autumn consists of suede Chelsea boots as well as all black high-top lace-up sneakers and combat boots which add a tougher edge. 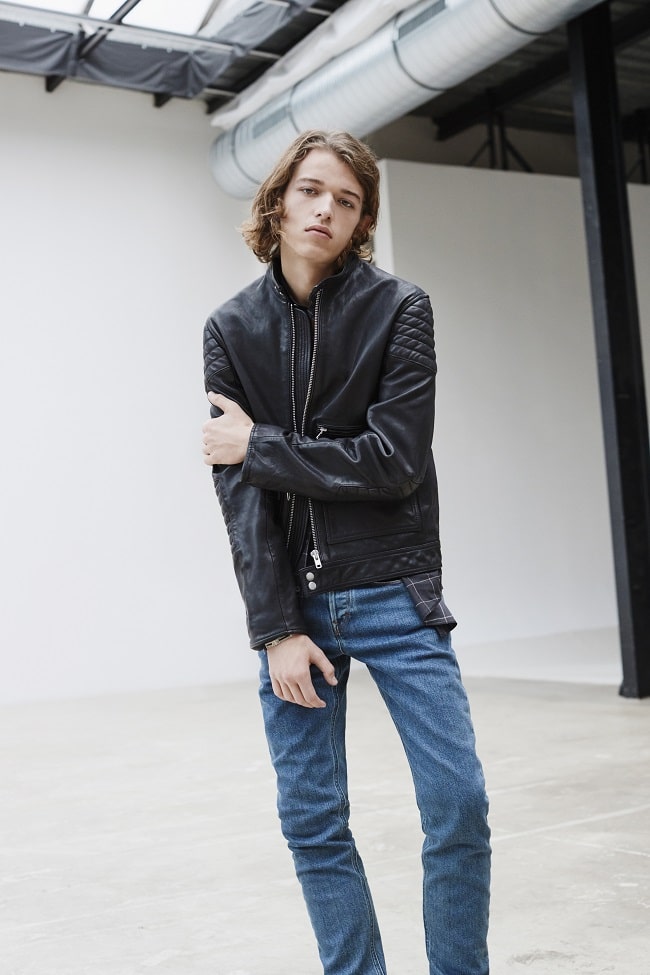 The brand's ethos has always revolved around combining opposites, for example; modern and traditional, light and dark, humorous and serious. In this new collection it is clear to see this continues with the harder leather jackets styled with softer cottons or tailored plaid jackets worn with more casual layers. The laid-back feel makes the clothes ideal for the typical millennial and 'digital dad' who enjoys the world of social media but doesn't want to come across as trying too hard. They aspire to be ‘cool’ but without much effort. The Autumn collection can easily be worn as part of your everyday wardrobe but will almost certainly be your chosen attire to wear to a gig or tagged in a weekend’s instagram photo with your mates. 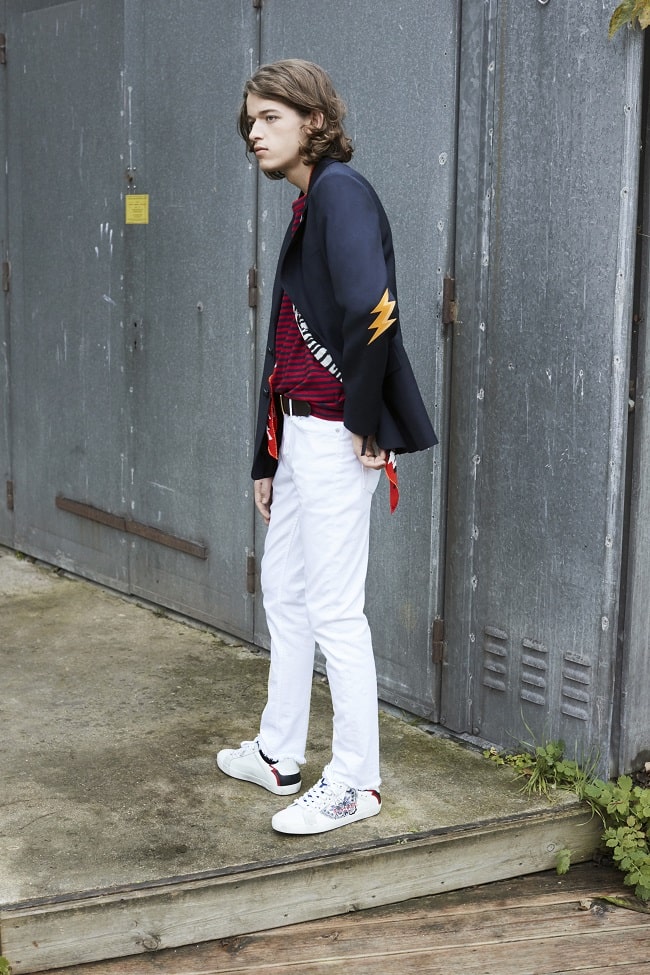 Thierry Gillier has created a seemingly more accessible luxury brand and now has stores in 40 countries; from London to Lebanon and Milan to Macao. He has managed to successfully create a company that has evolved with the times and the youthful generation who are constantly moving and seeking out the next fashion 'must have'. It is not an easy task these days as fashion seems to be moving faster and faster as every season comes around. Designers are having to keep up with high demand and some well-known brands continue to struggle, however with sales numbers continuing to soar, Zadig&Voltaire seem to have their fingers firmly on the button and don’t intend on slowing down anytime soon. 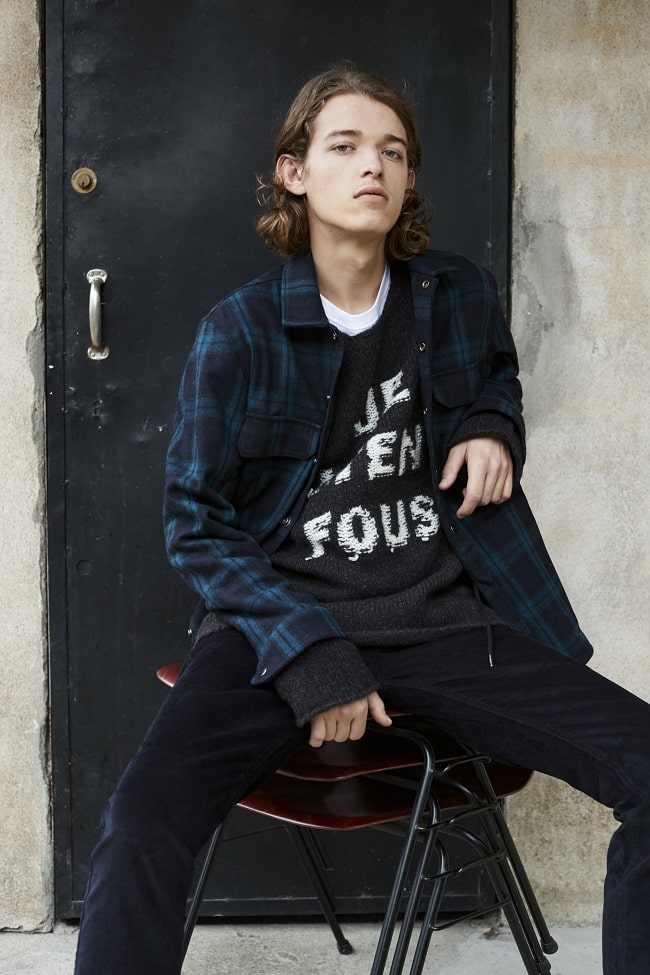