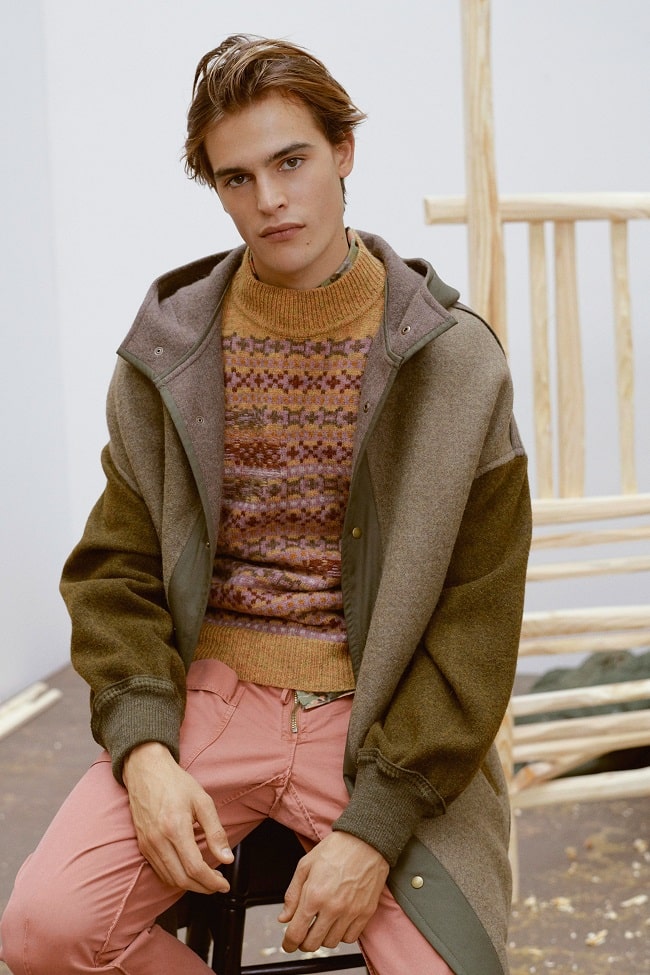 You can always count on your neutrals. But, a steady stream of greys, whites, and navy gets kind of dull – unless minimalist, monochrome menswear is your thing. And, even then, you need a bright dash of colour to break it up on occasion.

Still, some seasons, you might want to experiment with a pop of yellow, while pink or cobalt could be more appropriate in others. With this new season underway, here’s what you should be combining with your wardrobe’s default shades: 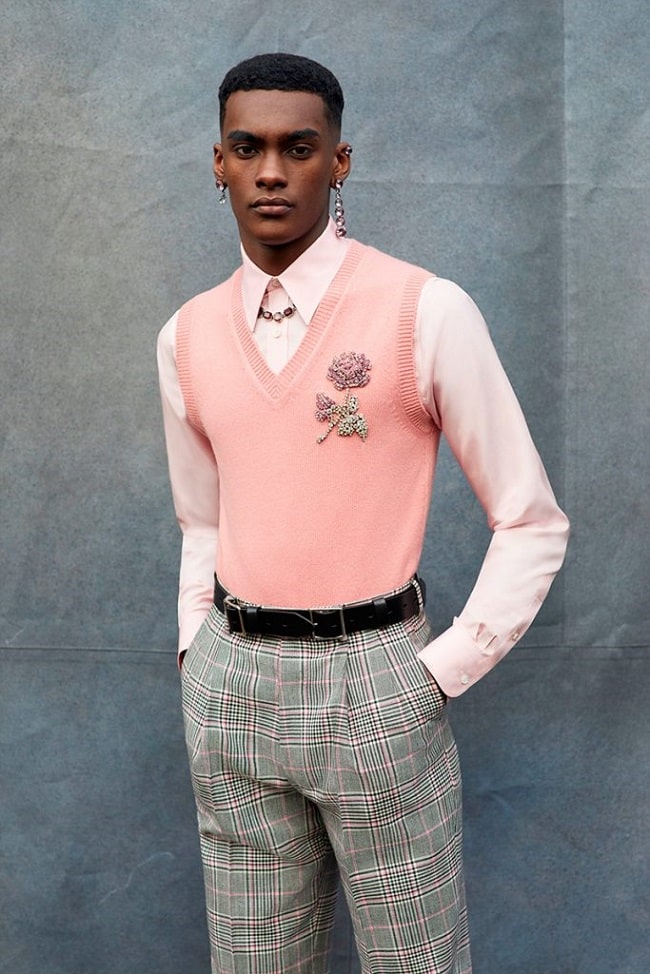 When isn’t black in style? When it’s been falling out of favour in recent years for its softer cousin, charcoal, or other classic neutrals like navy. 2019’s been black’s comeback. But, to play around with a tired cliché, black’s not quite the “new black.” Rather, its return goes down two avenues. One – and the most familiar – is the black suit. Over the past few decades, this default colour has garnered a solemn reputation – the “funeral suit” if you will. Or, we associate it with emaciated mid-‘00s alt rockers wanting to seem retro, but subsisting entirely on Thom Browne’s shrunken silhouettes. In any case, the black suit isn’t quite as skinny, but it’s not fully back in classic form, either. Instead, it exists in that semi-casual, semi-formal realm where many men’s suits now exist. You’ll find it in textured form, perhaps in soft velvet, and while it’s not quite skinny, you won’t spot one in that oversized, double-breasted Louis Vuitton cut, either. The other pathway – and the lesser accessible option, if you will – is the oversized leather trench coat seen in presentations by Daniel Fletcher, John Lawrence Sullivan, Bobby Abbley, and countless other Fashion Week shows. It’s a total Matrix throwback that, on a mainstream level, didn’t quite work the first time around. This time, though, it appeals to our inner Goths (or is it Steampunk now?) with heavy leather construction, a matte finish, and frame-disappearing shape. Even if Keanu Reeves is off doing the next John Wick movie, you can still channel Neo like you’re saving the world from Agent Smith. 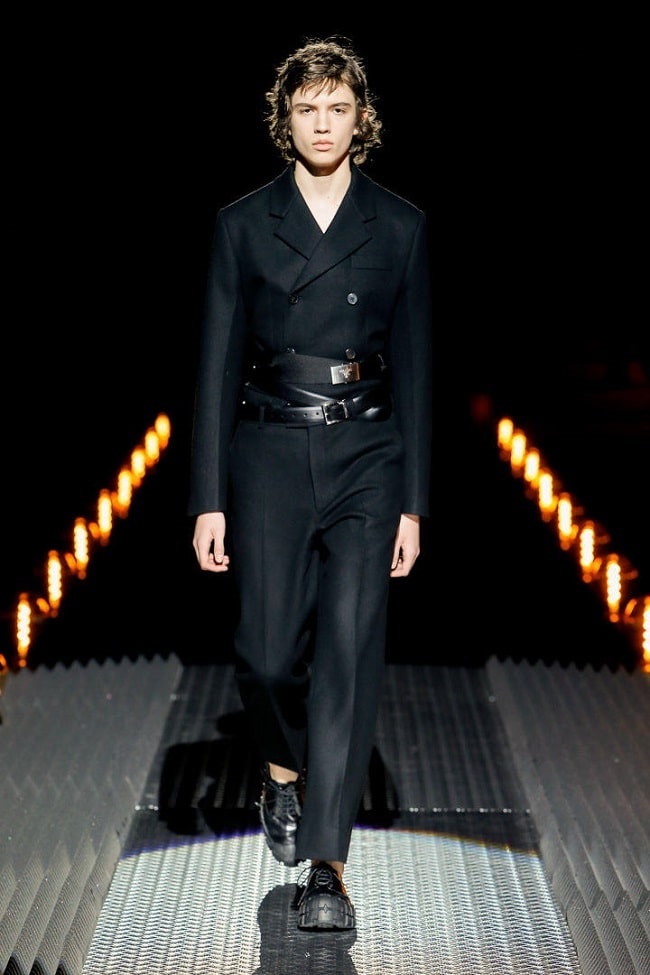 Is it really back? The scourge of 2010 fashion trends, Millennial pink’s the shade that can’t quite find the door out. Yes, it gets close, but then, it loops around, perhaps piggybacking off a similar shade – in this case, it’s dusty, blush-hinted Peach Pink and almost-white Crème de Pêche. As such, there’s a pink shade out there for every character: The guy who prefers things to be subtle, the one who wants some substance, and the few who consistently seek out bold and saturated hues. In every instance, take your pink in solid form. We’re spotting it as a full-on suit shade and for longer overcoats – although, for everyday wear, a blazer is a bit more manageable. Have fun with knit or glossy textures and keep the fit on the loose side. Whatever your approach, the shade needs to feel warm and rich – not electrifying and harsh – so avoid anything neon. 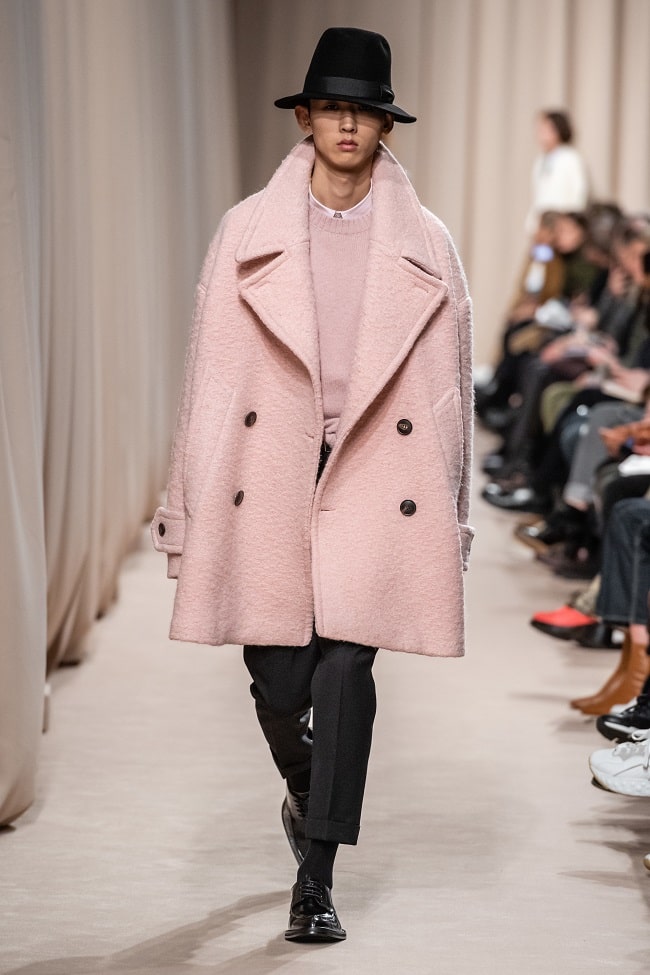 It would be too easy to call AW19 another season of statement shades. It’s not, really. Rather, it’s a strange dichotomy of reworked (more on this in a moment) and revived neutrals, and warmer hues in less-intense qualities. Adding to this latter group, reds in your closet should remain in rotation, especially if they’re on the brighter, bittersweet side or have some purple or brown mixed in. Pantone’s AW19 colour report calls these two respective shades Chili Pepper and Biking Red. Although the former’s punchy, piquant nature is relatively self-explanatory, the latter gives burgundy a warmer makeover, with blue and brown tinges subdued just slightly. It’s almost a dark-clay or Southwestern sandstone shade with a touch of purple mixed in. 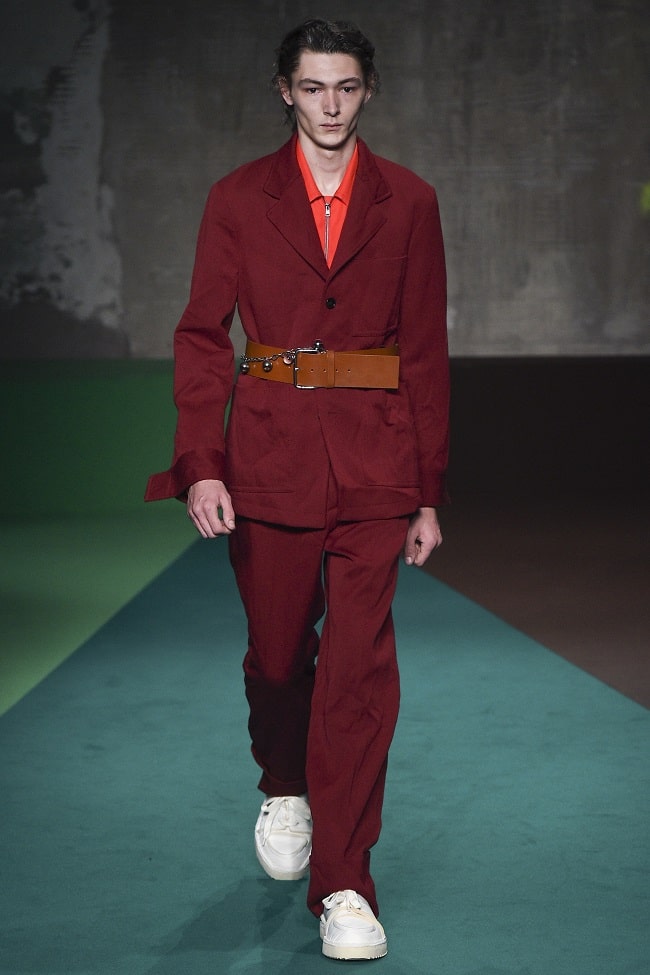 When we hear “off-white,” we picture some kind of beige-y colour reminiscent of the dullest house paint around. Full-on white made a return this past summer, and while it’s more seasonally appropriate, solid white has a few downsides: Mainly, it can be floodlights-bright in the wrong setting, and you’ll pick up stains every time you sit down. Off-white isn’t a perfect solution, but it improves on both of these areas. Plus, with touches of pinkish-orange and yellow – based on Pantone’s report, with names like Crème de Pêche and Vanilla Custard, respectively – these versions aren’t the usual lame suspects and have very light autumnal notes. 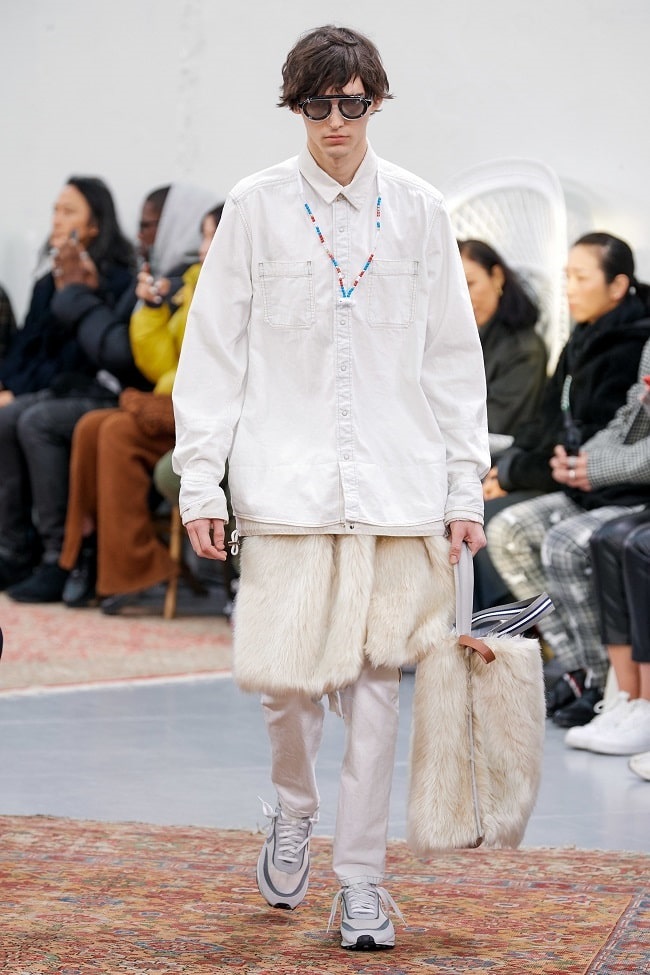 Names like “Rocky Road” and “Sugar Almond” should tell you all you need to know. If not, both shades – one dark, one light – have a warmer, slightly earthy centre and no cooler undertones. There’s something sweet and almost comforting about them – a departure from the woodsy, green-based hues we’ve seen in more recent years. And, with browns gradually shifting into the realm of everyday neutrals, consider these tones for chinos, blazers, and heavier outerwear. 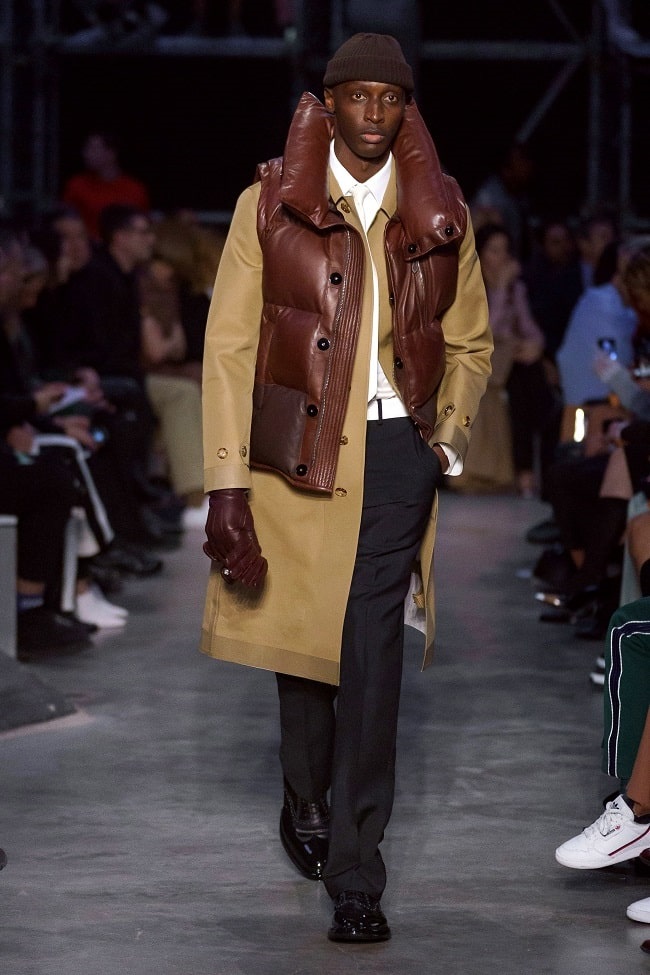 Rounding out your warmer hues, orange hasn’t quite dropped out. Yet, it’s not at the highlighter-or-rave intensity it reached close to two years ago. Instead, it resides in a similar dichotomy as red. There’s a warmer side – called Orange Tiger by Pantone – and a sandier, muted version, called Dark Cheddar, that’s closer to burnt orange but without the brownish undertone. Because orange feels brash by default, be selective with your application. Keep the shade to one item if it’s in solid form or sneak it in through a pattern – even in low doses, it’s a strong highlighter. 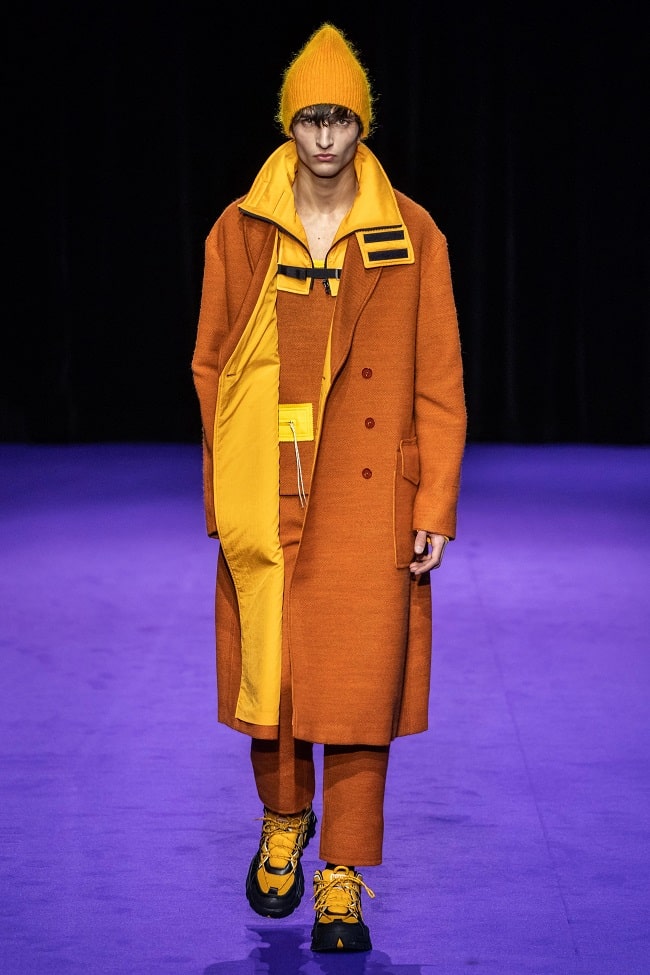 Let’s face it: Navy’s versatile, but it’s oh-so-tired. The past few years, designers have been in search of another neutral blue. Cobalt, royal, and bottle blue have offered an alternative, but all hover somewhere within the boundaries of statement shades. They’re too bright, too bold, and not versatile enough. AW19 tones it all down a bit, without tossing out the entire mission. Galaxy Blue is the perfect hybrid: A bit cobalt in its brilliance, with its roots in the depth of navy, it has enough body and pizzazz without being too much of anything. Bluestone, meanwhile, presents a toned-down, grey-tinged version that mixes sky tones with strong slate notes. It definitely feels cool without being too ordinary. 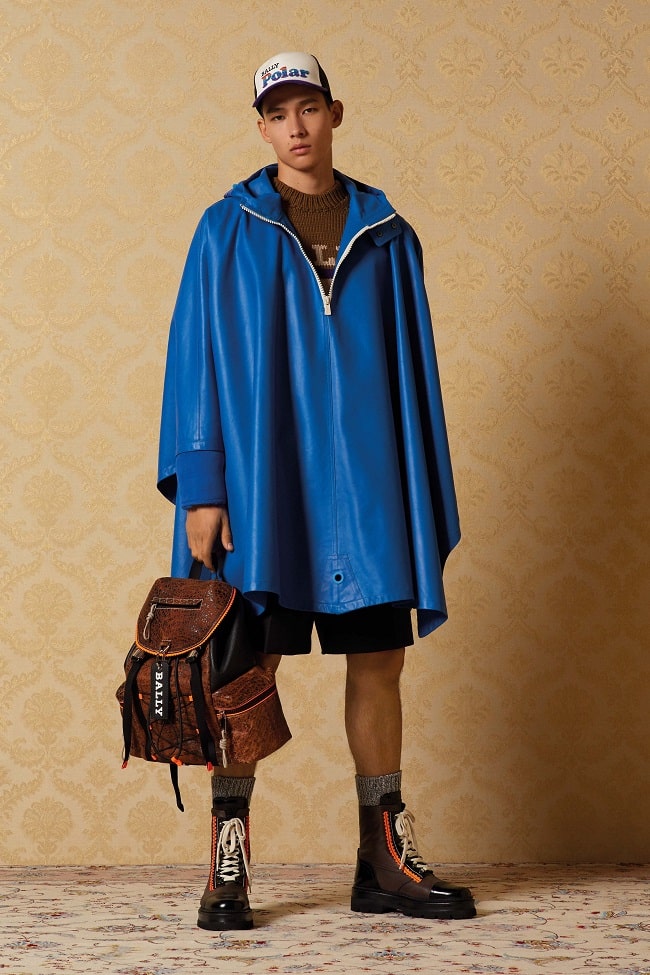