WAYS THE FOOTWEAR INDUSTRY IS TRYING TO BECOME MORE SUSTAINABLE 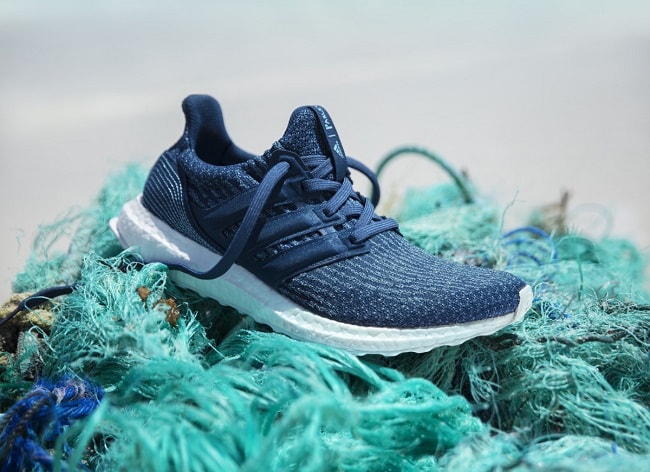 When we think trainers, we think sneakerheads, and the expansive resale industry that’s cropped up around this insatiable demand for limited-edition kicks. Yet, the flipside – and more concerning aspect – is, roughly 23 billion pairs of trainers are produced each year, and 300 million of these – likely the widely available athletic shoes that wear out or become worn beyond wear – end up in landfills.

Compared to apparel, a pair of trainers has a higher likelihood of being made entirely with synthetic, petroleum-based components: synthetically made rubber, new plastic, and polyester-based mesh contain no natural fibers. Perhaps you’ll find some through the laces, but overall, the footwear industry is unsustainable through nearly every step in the production process. As such, the biggest shift in footwear is the path toward more sustainable production, fabrications, and designs. Here’s what that looks like: 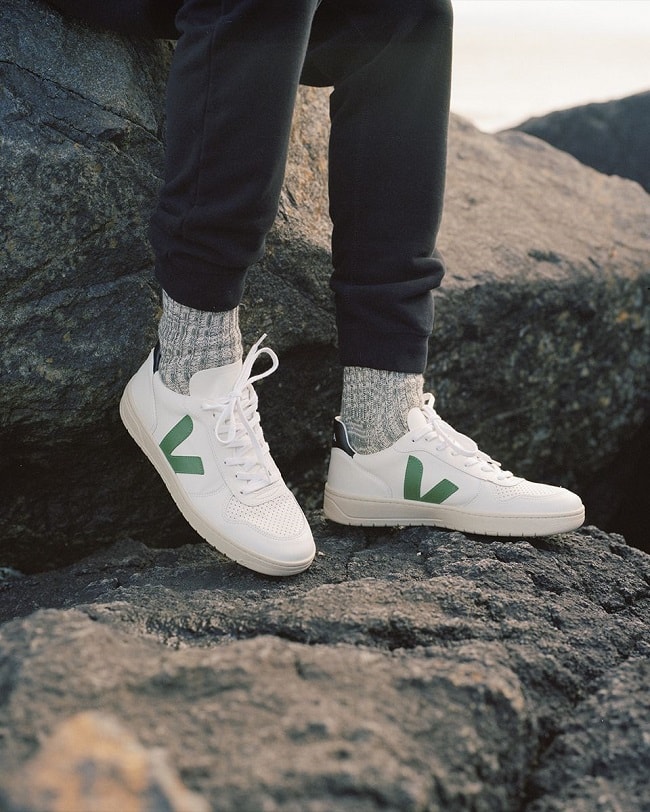 At this year’s NE Materials Show in March, the brands presenting fell into two big-picture groups: Tech features, and sustainable materials. In the latter, Coats offered an innovative solution that eliminated virgin plastics and chemical based dyes: The fibers composing the trainers’ uppers were made out of recycled ketchup/mustard bottles and thus retained their original colours. However, this approach has stretched far beyond this minor U.S.-based tradeshow. The Better Cotton Initiative, for instance, developed its Better Cotton Standard System – based on improving cotton production’s sustainability and lessening its environmental, economic, and social influence – that Nike, Adidas, and Levi Strauss have since adopted. Manufacturers meeting BCI’s standards have reduced the amount of chemicals and water needed to grow a crop of cotton, thus improving soil health, and take a strategic approach to land use to prevent disturbing its biodiversity.

Often ignored in the sustainable debate, leather’s sourcing and tanning processes have received some attention. Although many trainer brands have shifted to synthetics in recent years, it remains the most widely used material across footwear. However, consumers are rarely aware of its environmental impact, or even where the hides come from. Changing that approach, the Leather Working Group (LWG) has been striving to make these aspects more transparent, all while seeking to reduce leather’s carbon footprint – itself heavily tied into the agriculture industry’s reliance on deforestation and further extended through the tanning process. Since its inception, this collective has developed standards for tanners, regardless of where in the world they are, and each receives a Bronze, Silver, or Gold rating. The higher the rating, the greater the tannery’s attention to reducing its environmental footprint, including energy and water use, waste disposal methods, and ability to identify its components through the supply chain. The ultimate goal is tracing a hide back to the slaughterhouse and assessing the environmental friendliness of all processes along the way. 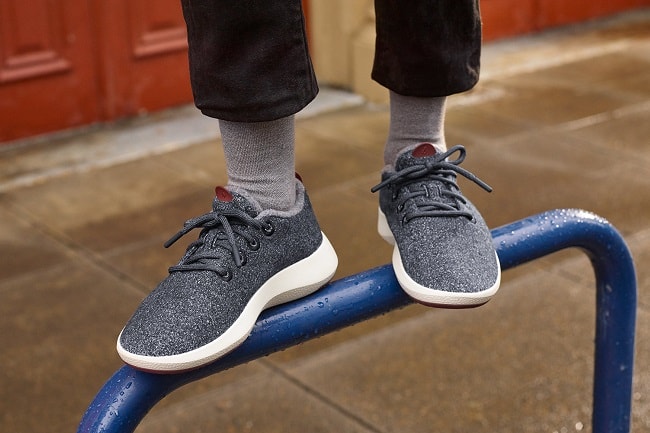 Footwear brands have started looking beyond the cotton, leather, and synthetic group. They're now looking toward other easily sourced, more sustainable alternatives. Most notably, AllBirds opts for merino wool – known for its antimicrobial, warmth-retaining, and moisture-wicking natural properties – or eucalyptus for its uppers and constructs its SweetFoam sole units out of sugar cane, recycled plastic, or castor oil. Also, on the recycled end, bigger trainer brands like Adidas, Reebok, and Vans have started making strides – excuse the pun – in this direction. Going back farther in this approach than its contemporaries, Adidas collaborated with Parley for the Oceans in 2015. The result, debuting the next year, utilised recycled ocean plastic and fishing waste to generate a unique pair of athletic shoes. Since then, other Adidas staples – Alphabounce+ Run and Ultra Boost, for starters – have used these recycled components. Reebok, by contrast, turned toward more natural sources with its Cotton + Corn NPC UK, made with castor bean oil insoles and corn sole units. Although earlier designs featured some leather, they switched to cotton to make the shoe fully vegan. Last year, Vans threw its hat in the ring with its Finisterre collaboration. More in line with Adidas’ vision, the two brands incorporated some recycled components – recycled plastic bottles for the webbing, tabs, and laces – and constructed the upper out of eco-friendly synthetic leather and cotton without compromising the shoe’s strength and performance.

As perhaps the biggest driver of unsustainable construction, shoes’ outsoles and midsoles by extension are made with synthetic rubber and EVA. Although construction has improved comfort in recent years, it has gotten away from more naturally derived sources. Veja trainers – themselves made with several bio-based materials over synthetics – have attempted to use natural sources of rubber. In the process, the brand ensures that rubber tappers get paid a fair wage and the trees are cut in such a way the rubber can be sourced repeatedly, without destroying a key component of the Amazon’s ecosystem. Dr. Scholl’s – known for its orthopedic shoes – went in another direction. Straying away from the usual petroleum-based sources, their recent sustainable collection utilizes rice husks for the outsole and algae-based EVA for the midsoles. Complementing this, the rest of the shoe design incorporates recycled bottes, reused leather, and cotton linings. 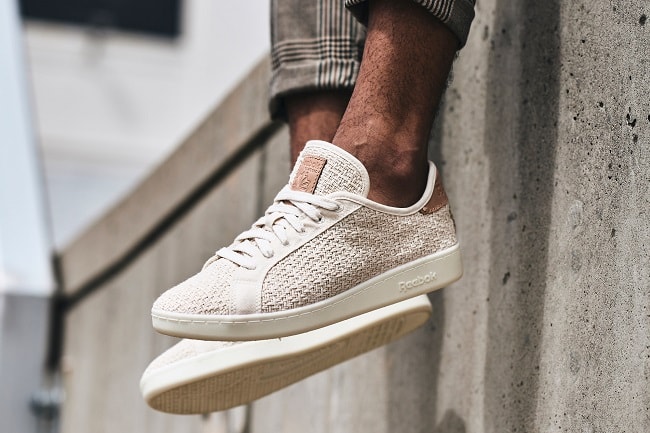 When many consumers think about how a pair of trainers or boots is constructed, they often picture a factory environment. While brands have gotten better about addressing the conditions in overseas factories and paying their workers fair wages, the actual production process has gone unquestioned. Where footwear is generally concerned, the greater the number of components involved, the more materials and chemicals the brand uses, and the larger their carbon footprint. To lessen these effects, a few brands have started experimenting with fewer components. Clarks is one: Its Seven line stays true to its name with only seven parts. Not only does the shoe take less time to manufacture, but it also involves less glue – a key contributor of extra chemicals involved in the footwear process. Added to this, outsoles for the Seven line are at least 20-percent recycled regrind rubber and latex.

Especially with athletic shoes, tech features can’t be ignored. Unfortunately, they involve multiple chemical treatments, unless a natural material gets used. Merino wool, to some extent, has become the default in terms of combining warmth, breathability, odour, and moisture control. Yet, especially considering the full spectrum of treatments out there, it’s rather limiting. In turn, brands have sought out other alternatives, with one of the more common options being the probiotic-based Cleansport NXT. Found on shoes by Keen, Puma, Wolverine, and many others. This treatment begins with microbes that are bonded to the fabric’s fibers. The microbes remain relatively inactive, until they come across sweat; at that point, they work to neutralise the compound’s odour. 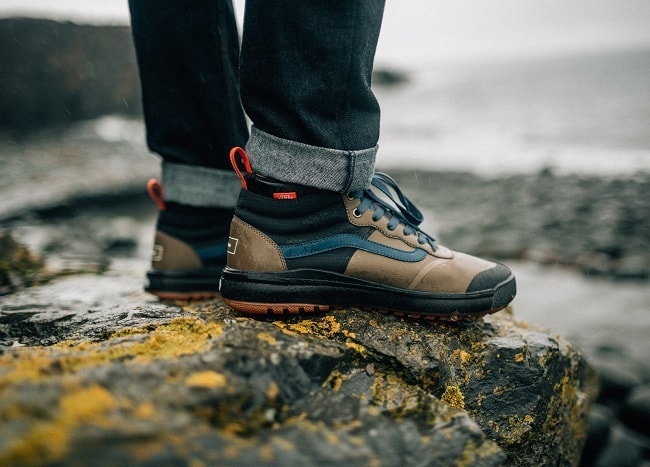 More recently, Nike pledged to use 100-percent renewable energy for its European operations, with one effort being a 1.5 million square foot distribution center in Belgium using nothing but wind, solar, geothermal, hydroelectric, and biomass energy, recycling 95 percent of its on-site waste, and shipping its goods by cable and water instead of the traditional truck. The move is one of several steps Nike has taken to eliminate waste and carbon emissions by 2025. Product wise, Nike’s Flyknit and Flyleather already reflects this change, respectively made with recycled plastic or recycled leather. Especially now that ecommerce has lessened the number of brick-and-mortar stores, footwear brands have started addressing their packaging strategies. Although now you’ll see more recyclable plastic options, Dr. Scholl’s opted for a different approach. Shoes now use less packaging overall, with the components involved made from bamboo or recycled sources and printed with soy-based inks. 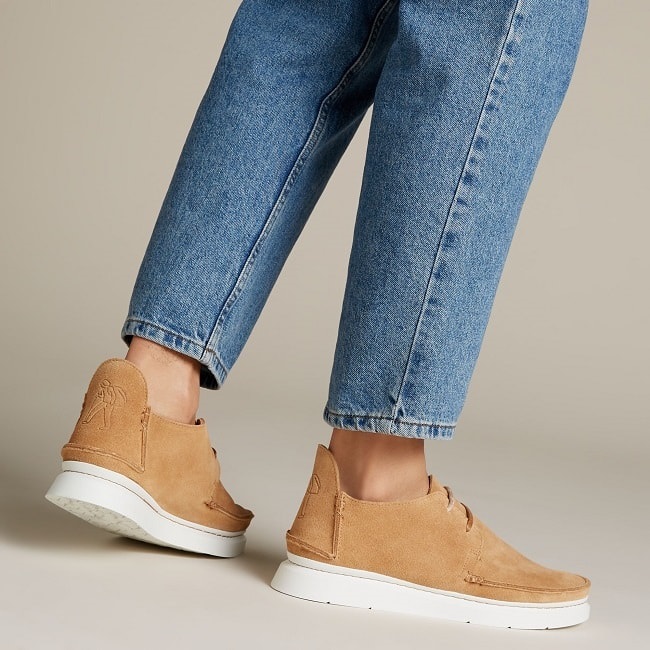