EVERYTHING TO KNOW ABOUT THE PASTEL MENSWEAR REVIVAL 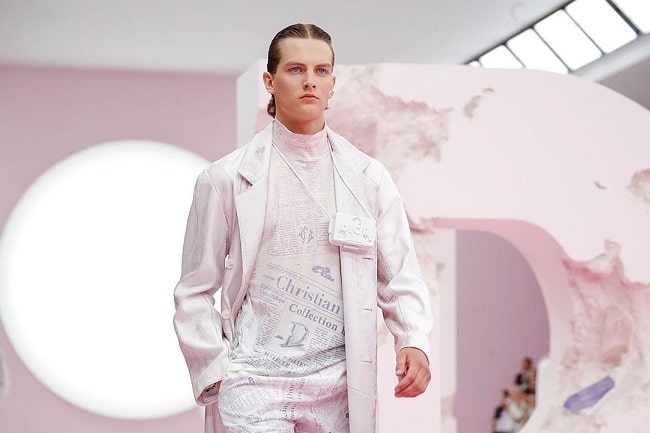 They come and they go and then, they return again. We’re not talking about a flaky friend who’s in and out of your life. Rather, we’re speaking about pastels within the realm of menswear. They’ve been on our radar since about 2013, returning a couple of times but never going strong for more than a couple of successive years. Each time, they still feel fresh, but something’s a tad different. Maybe it’s us, though. Pastels have always felt like a forbidden womenswear trend that we’re afraid to touch, and when we do, it’s only for a few moments at a time, before we put it back on the shelf and say, “Not yet.” Or, we balance it out: say, pairing the pink button-down with a navy blue suit, and justify it in small amounts, thinking, “It’s not that much.” SS20 is a bit different. Dare we say it, we’ve reached peak pastels and have worked far beyond the small pops and hints we’ve dabbled with over the past decade.

SS20 presentations remind us of a sleeve of Necco wafers – the defunct, chalky-tasting candy that, in chocolate or fruit flavors, always looked a bit dusty. They also covered the full spectrum of the rainbow, from predictable pinks and purples to green, orange, brown, and yellow. For this season, we’re spotting the usual players – the pale to Millennial pinks, plus tons of lavender – but are also noticing aqua, mint, and even subdued neon green, faded nearly-brick oranges, off white, and even browns that are partially bleached out. As the short version, every shade’s a pastel, as long as you put it through the right filter. 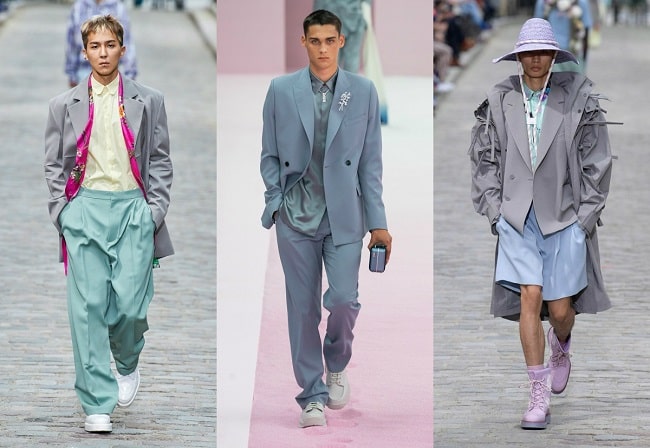 Previously, trying out pastels required a specific, almost contorting methodology, of experimenting with it in bits and hints. It’s much like trying out hot sauce for the first time: A few splashes over your eggs or on the bread of your sandwich, so you can get accustomed to the taste. No one likes a mouthful of Tabasco right off the bat – it’s, frankly, pretty uncomfortable the first time around – but at this point, pastels are about as ubiquitous as Sriracha – it’s so ordinary, you can get it at a fast food joint. Thus, the rules aren’t pick a pocket square, try out a shirt, or experiment with your socks. It’s 2020, men can wear lace and heels, and a full-on pastel suit isn’t that far out. Runway presentations have even gone a step further with full-on monochrome – matching the tie and shirt to a solid-colour pastel suit. Essentially, it’s the rules of minimalist menswear revisited with a far-from-minimalist shade. Yet, monochrome is far from your only option. Over at Louis Vuitton, Virgil Abloh’s garden-themed collection has rewritten the rules of pastel dressing. No longer do you strictly have to pair it with neutrals and darker-toned shades that soften, if not dampen, its brightness. Instead, as long as you mix your warm with your cool tones, pastels can be worn with other pastels, without ever coming across like a candy-coloured eyesore. The trick here, though, is keeping everything on the dusty and muted side tones down the entire ensemble. 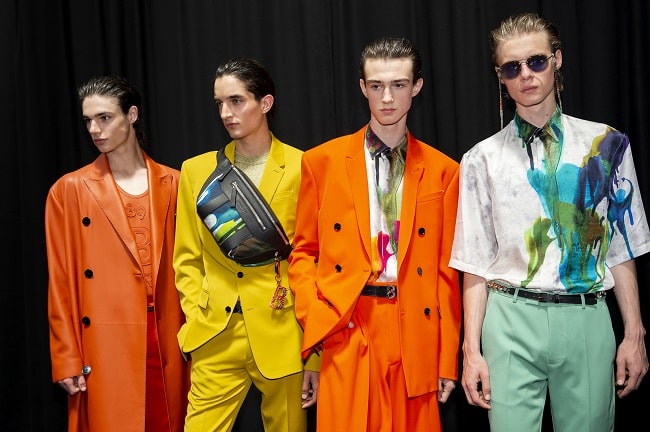 Through a Casual Perspective

Pastels, through a retro perspective, conjure up images of ‘80s preppy styles and ‘70s prom tuxedos. For SS20, the best thing to do is throw these assumptions out, and replace them with references to the New Romantic era or ‘80s Miami style, but the allusions themselves shouldn’t be so heavy handed. Avoid the frilly ruffled shirts, synth-heavy freestyle music, and big hair. What you can do, though, is align these past iterations with a sense of relaxation and leisure. SS20 calls for slightly more spacious trousers – or ones that are cropped right above the ankle, as if to communicate how you’ve been wandering the shore all morning. Blazers, meanwhile, should extend just a bit past the hips, and ideally should wrap around your frame at least partially with a double-breasted closure. In some instances, a completely unstructured form fits the occasion – like we’re seeing from Balmain – or you need to examine the ratio of sharp to flowing edges between your jacket and trousers. 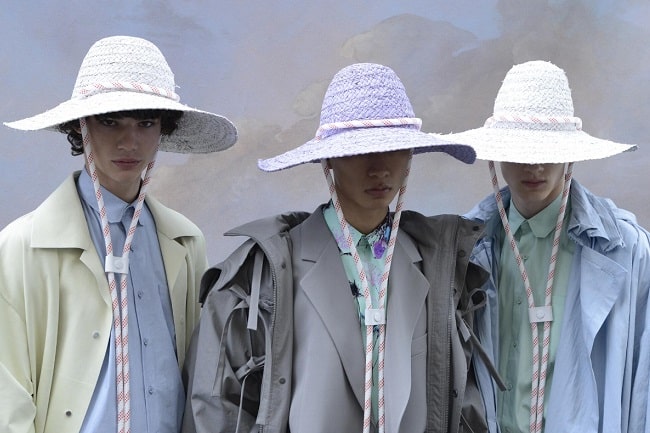 The new suit, as we’ve covered before, needs to nod both to classic tailoring and streetwear but fall somewhere in the middle. The silhouette covers part of this vibe, and materials the other half. Satin is one of SS20’s most ubiquitous trends, no matter the colourway, and in this sense, a pastel satin suit needs to toe the line between full-on louche and dressed-up pyjamas. The material shouldn’t be so light and shiny that you could only appropriately wear it in your living room; that said, it needs some sheen and is best paired with an open camp shirt for full-on weekend-clubbing-in-Miami vibes. 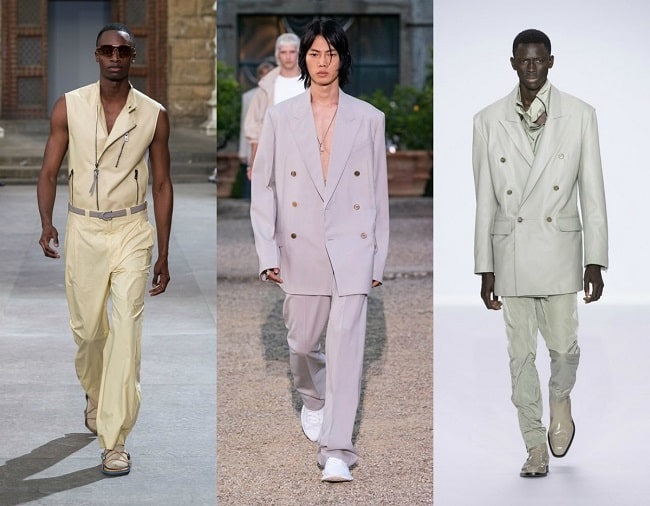 A Foundation for Experimentation

Who would’ve thought pastels could be treated as a neutral shade? Yet, multiple runway presentations see it as a platform for more experimental suiting silhouettes: cropped jackets that fall above the hips, fold-over double breasts at Dior, a butterfly-style lapel at Ferragamo, higher button placement, pleats, and more than two rows of buttons. We would’ve previously only seen something like this on navy, charcoal, or even an envelope-pushing burgundy, but now, it’s relatively clear that buttercup yellow or mint green isn’t so shocking that it’s only reserved for their single-breasted brethren.