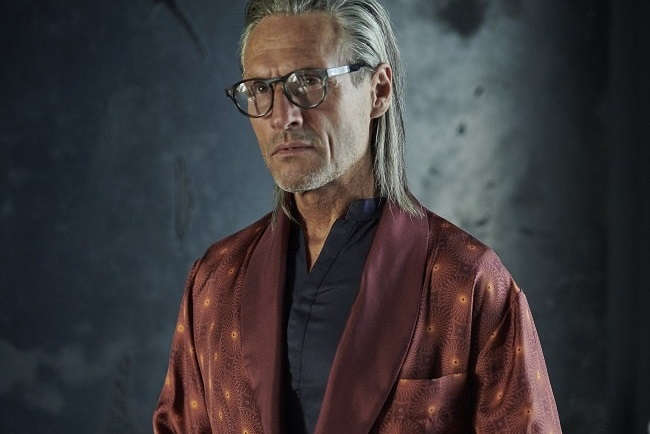 The fashion-as-art trope often goes to grand proportions. Think the runway presentation in which the models are sporting sculpture-like adornments. Or, if you recall back a few years, there’s appropriating art for fashion — remember the ubiquity of New Order’s Power, Corruption and Lies cover art, designed by Peter Saville. None of it seems practical or lasting.

Geoff Stocker, designer and owner of his eponymous men’s accessories brand, proves to everyone that art – as in, proper graphic design and digital printing techniques – can form the backbone of a fashion line without it seeming overwrought, forced, or frivolous. Starting his brand in 2014 and recently debuting his SS20 collection, Stocker quite literally illustrates how these media can weave together. 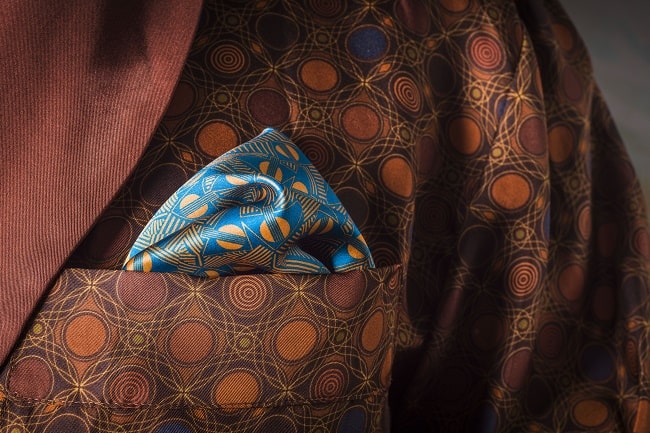 Stocker himself has a background in fine art, and all the way back in 1996, he embraced then-nascent digital technologies like Photoshop to create prints of his own abstract compositions. Initially, he had no intent to branch into fashion; rather, he worked as an artist and lecturer for some time. Yet, Stocker’s own interest in printing, plus his exploration of other cultures’ visual arts, started slowly paving the way toward a second career. The technology allowing for designs to be digitally printed onto fabrics shed more light into this area. Stocker began digitally printing his own rich, detailed geometric patterns on to textiles, including silk, and soon enough, he had created a set of pocket squares and scarves. Upon showing them to others, they immediately received a positive reaction. Not long after, Stocker launched his own brand, selling his artistic-based accessories online and at independent menswear stores in the U.K. Today, the Geoff Stocker brand encompasses over 50 unique patterns on silks, satins, and twills influenced by the arts, culture, and the designer’s own travels. 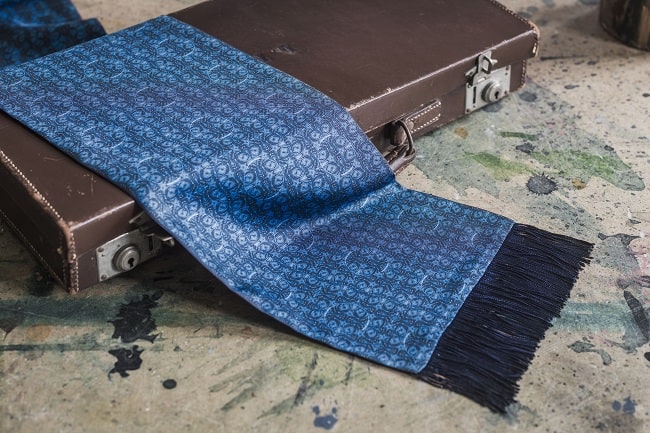 What Defines a Geoff Stocker Design?

Industry figures have since likened Stocker’s accessories to wearable works of modern art. It’s easy to see why. Digitally printed and made in the U.K., pieces appear vibrant and complex even from a distance; a closer look, meanwhile, reveals the craft Stocker puts into each one. Examining one is almost a museum-type experience. Although geometric patterns characterise many of the designs, no single descriptor can be applied collectively. Rather, Stocker equally pulls from natural and abstract elements, sometimes dropping clear hints in the name or, in others, requiring you to think about the reference. And, in an era when “statement” fashion simply means bold and loud, Stocker’s accessories resemble the inquisitive intellectual who takes up a room without putting on a grandiose, boisterous presentation. As a result, Stocker’s pocket squares and ties have been spotted on celebrities seeking to make a strong visual impression without restoring to tacky hypebeast tactics. 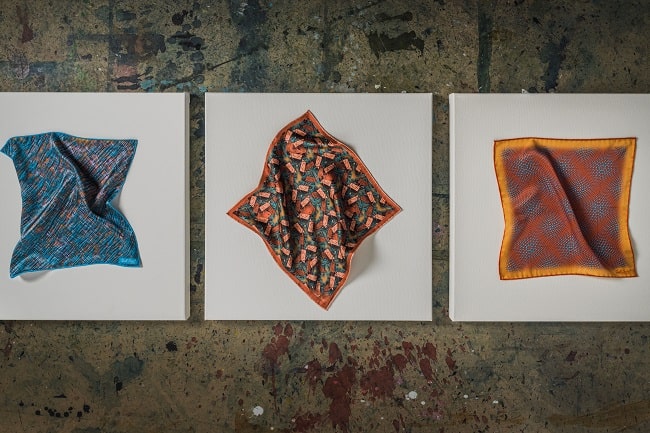 Going beyond the subtle hints, dressing gowns entered the lineup in 2017, officially transitioning Geoff Stocker from strictly accessories to a contemporary men’s lifestyle brand. In his quest to create unique, eclectic designs that borrow from world culture and art, Stocker’s dressing gowns hit every note while showcasing his digital designs on a significantly larger canvas. More specifically, the silhouette pulls from Stocker’s travels to Japan in 2016, where the shape and prints on men’s kimonos captured his attention. Yet, it’s spliced with the style and functionality of a 17th century European dressing jacket. Today, as a third perspective, many of the elements further allude to the men’s smoking jacket, but add a more casual touch while elongating the form. As one of the highlights, the Saxon dressing gown references ancient treasures with a digital geometric pattern inspired by coins and pearls. For at-home luxury, its unlined, lightweight twill construction is complemented by a shawl collar, side pockets, rifle cuffs, and a sash belt. 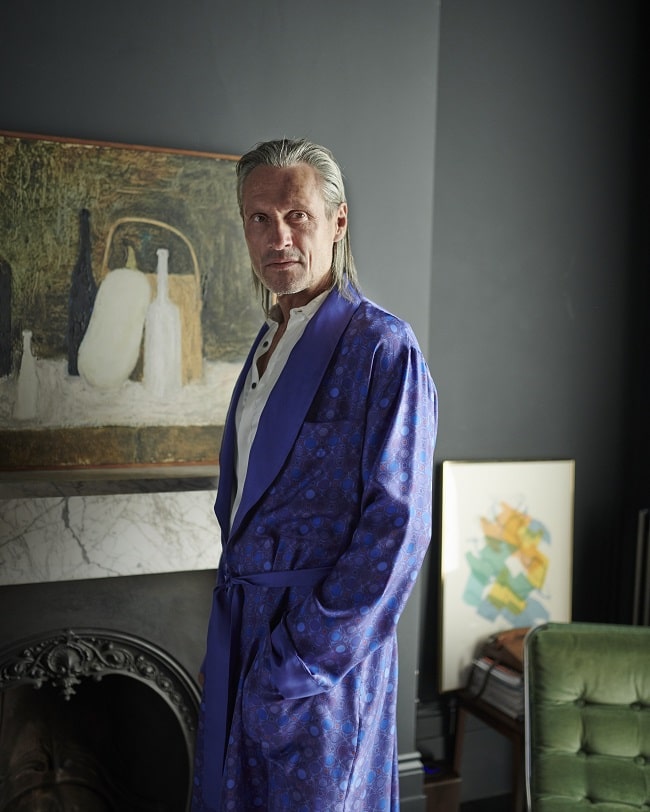 Although the same principles are used to create contemporary artwork, a Geoff Stocker design isn’t just a print on a fabric. Rather, the geometry and size are specific to the material’s shape and the garment’s function, and Stocker himself approaches each like an artist does his canvas. For instance, a pocket square looks and feels individualistic, rather than appearing as a snippet from a larger garment. And, particularly where the dressing gowns are concerned, the fabric flows and interacts with the user’s body – it doesn’t just hang. And, as tailoring itself is experiencing a revival, Stocker doesn’t print his designs on just anything. Cheap synthetics lessen the appeal, if not cause the design to stretch out and fade with time. Instead, Stocker has sought since the beginning some of the finest materials. Silks are ethically sourced, while satin and twill feel substantial and sumptuous and enhance the artwork with a distinctive luster. 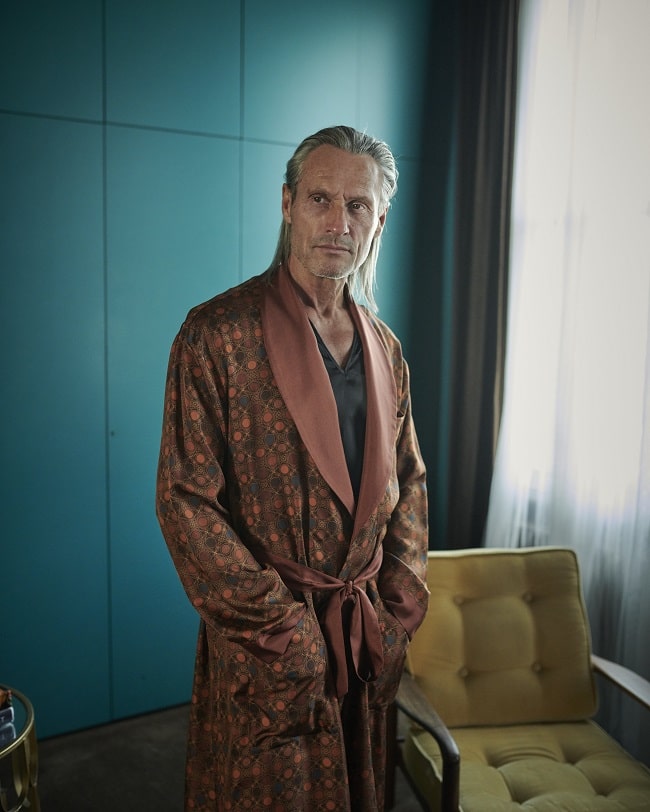 At the same time, no fashion brand can ignore the push for sustainable, locally made garments, and Stocker is no exception. A family-run business takes care of the digital printing – itself a more environmentally friendly process than traditional screen-printing. This greener approach uses less ink, as the application is far more precise, and no harmful chemicals are needed to pre-treat the garments. Added to this, Stocker generates all designs with a computer and transfers them electronically – another motion toward reducing paper waste and the brand’s environmental impact. Between these steps, the process allows for a wide spectrum of possibilities, due to the number of colours and tones available. As a result, not only is the product intensely vivid, but it’s an exact translation from Stocker’s own artwork. 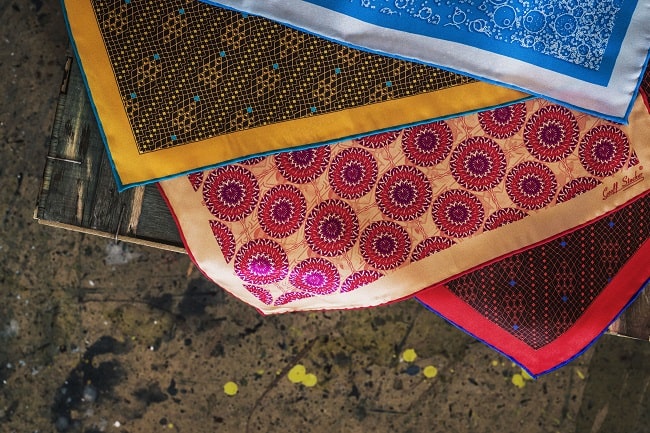 The references aren’t so oblique that you can’t tell Stocker’s SS20 oeuvre is all about the warm tones and lighter fabrics. But, into pastel territory he specifically doesn’t go. Instead, the aptly named ‘Solstice’ line salutes the sun through multiple methods. On one hand, Stocker balances rich purples, greens, and blues with the burning brightness of yellows and oranges. The result produces clear, almost silhouette-like contrasts that offer some interplay with the seasonal-adjacent designs. Among them, the Icarus pocket square resembles palm fronds, although an up-close perspective of feathered wings serve as the design’s foundation. Either way, you’ll feel as if you’re in the tropics, without needing to break out the Hawaiian shirt and linen trousers. The Byzantine, meanwhile, appears like orange sunbursts, although the design itself references both fireworks and Turkish mosaics. Gemstones give its fully satin construction a secondary textural element. 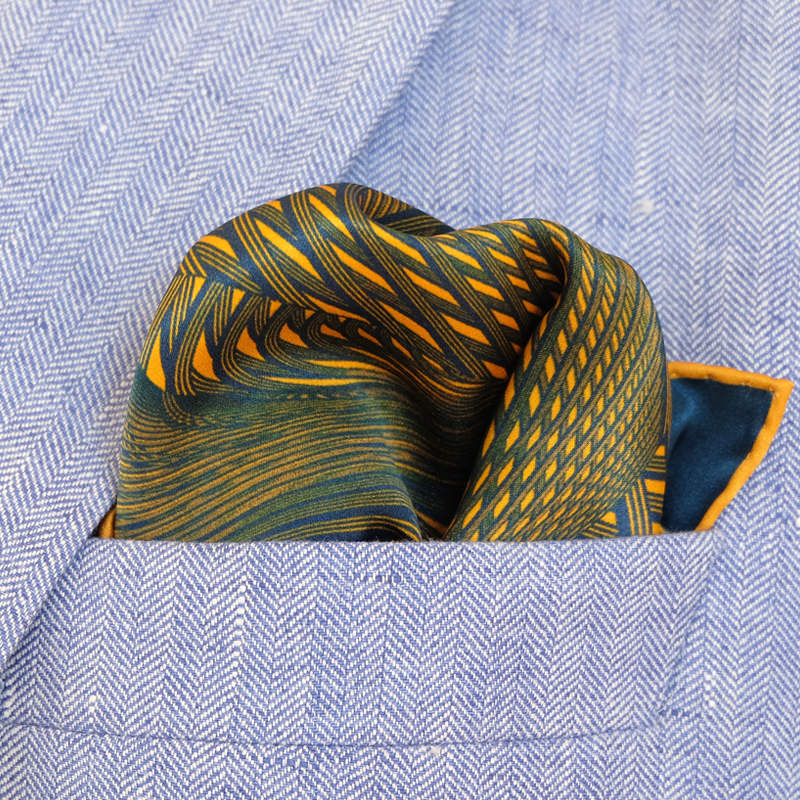