WHY PINK MENSWEAR HAS RETURNED FOR SS20 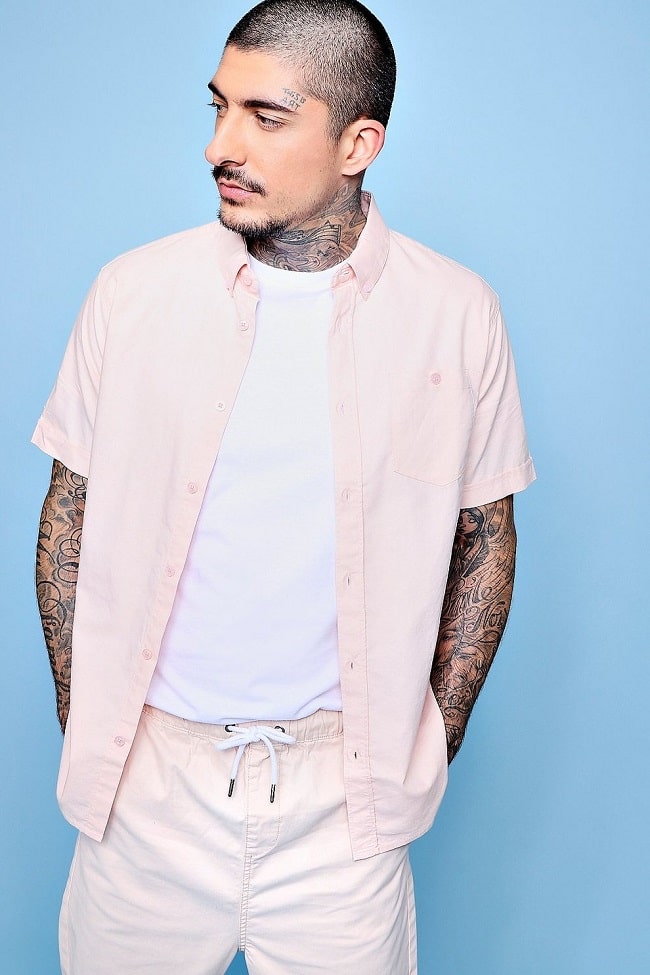 Femininity in menswear sails along an undulating path, or rises into floral prints, lace fabrics, and shades of pink, before it falls somewhere down back past burgundy, purples, and higher waists into the nadir of navy and other neutrals. The swell itself peaks often with a clear foray into pink: not just a splash via a pocket square or subtle inclusion with a check print, but a full-on saturated hue. Although pink eras have periodically punctuated menswear for decades, a full-on sine wave started in the early 2000s and hasn’t quite let up since. Somewhere around 2017, darker, dusty rose hues infiltrated the array, and last year, Millennial pink saw its lifespan extended by one more summer. Now, spurred partially by Dior’s and Louis Vuitton’s SS20 suiting presentations this time last year, this year is about the barely-there blush-pink hue: rose if you want to be literal, or rosé for a dated yet nonetheless recognisable pop culture touch point.

The predictions about rose pink being 2020’s “it” colour started rolling in back in January, roughly two months before any of us thought about being in quarantine. Yet, the sudden lifestyle shift didn’t put the kibosh on this latest wave; rather, based on the Lyst Data Drop for May 2020, bored, mindlessly surfing menswear aficionados were still seeking it out, as well as “watermelon” keyword terms. That month alone, searches for “pink” phrases in menswear increased over 120 percent. 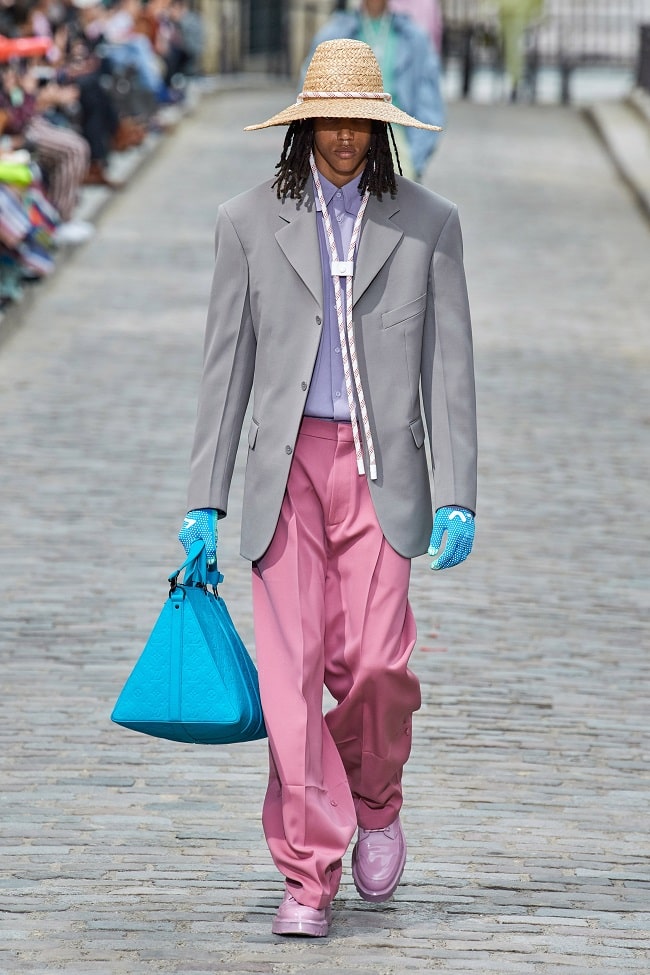 Random? Not exactly. Although it now feels like a lifetime ago, Harry Styles dropped his “Watermelon Sugar” music video roughly at this point. The song and look reflect what we’ve come to expect from the former One Directioner – a bit of ‘70s, a bit of androgyny, and some coy-but-never-direct bisexuality – and Styles sports a pair of wide-legged bright pink pants for part of the video, as well as a set of rimless pink shades and pink nail polish. None of what he’s wearing is truly watermelon in colour – it’s more magenta or an electric pomegranate, to be more specific – but the video shows that, yet again, Styles’ output indirectly functions as a menswear barometer, whether or not we care to admit it. So, with rose and watermelon taking centre stage, what’s behind the sudden popularity of pink menswear? 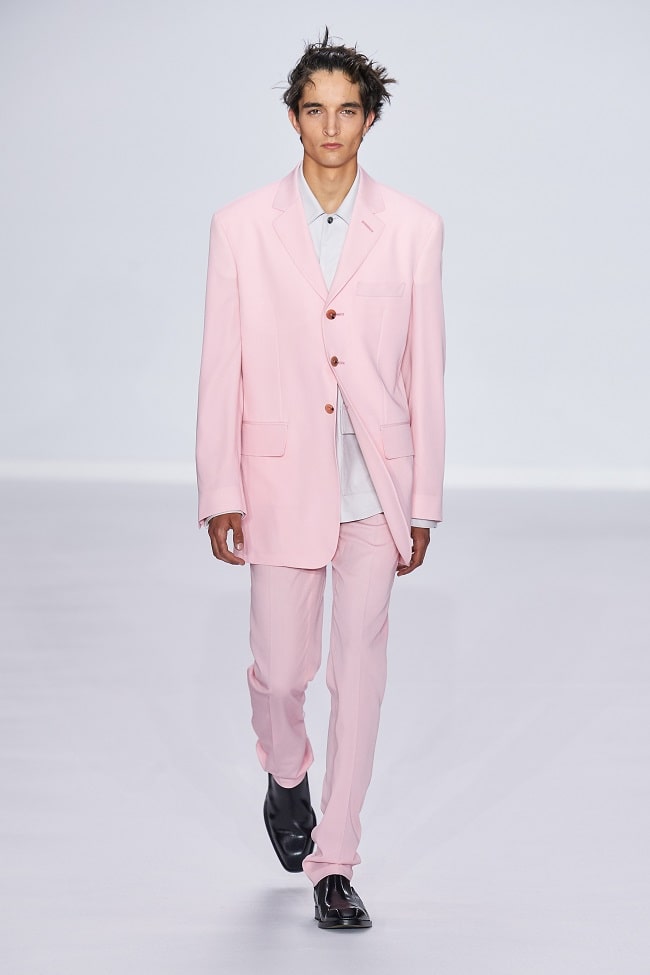 An ongoing string of streetwear-influenced trends have dug up a ‘90s way of pushing buttons: being direct, flaunting pushed boundaries, and making clear and obvious allusions. In much the same way every influence in a Jeremy Scott collection hits you right on the head, the past few years of menswear collections have toyed with parody graphics, bright, occasionally neon hues, and obvious gender-bending. Whether you’re picturing a hypebeast-y scumbro or a men’s lace shirt, the undermining of classic silhouettes, colours, and materials is intentional almost to the point of artlessness. Wherever you’re looking at the presentation, it’s a “Yeah, I get it”-type of moment. But, if something is heavy-handed without a defined purpose, then you’re left asking yourself, “So, what’s the point?” It’s the same effect as watching a gore-laden or intentionally pretentious movie and acknowledging that a subtext is meaningless. Instead of having everything laid out in the open for everyone to see, SS20 menswear collections took a step back. No, it’s not quite to an allusion-filled allegorical territory where you have to get some high-brow reference, but rather, it’s saying more, doing less, and presenting it in a more accessible framework. 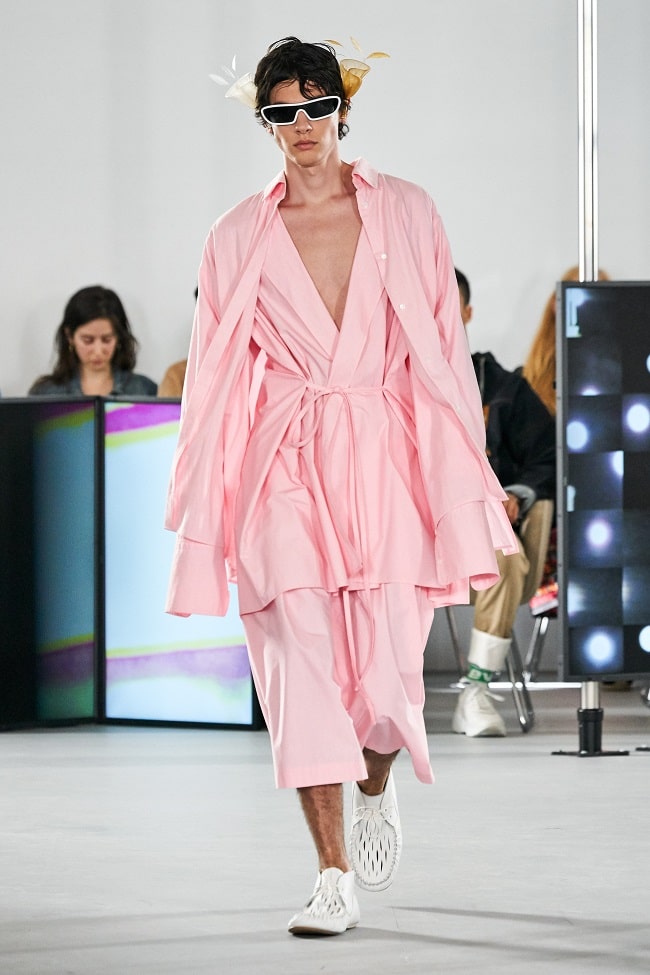 Case in point: the abundance of pastels this season. Essentially, every shade you can picture, from yellow to brown, gets a muted take that frosts over the intensity and adds a softer side to a traditionally neutral or masculine shade. Through this filter, then, in which everything looks like a dish of sherbet, rose and watermelon pink feel like less of an anomaly. As the next stage building off this shift, Dior, as well as Balmain, Loewe, Armani, and Louis Vuitton, applied these solid hues by themselves to traditional, if not slightly oversized, menswear silhouettes. No bows, no lace, and no ultra-slim fits were to be found. In a true sense, the dichotomy ends up illustrating the inherent femininity in masculinity and how the two opposites can easily overlap and intertwine. The effect also illustrates a factor few are still willing to admit: that femininity in a masculine context doesn’t always have to be cartoonishly forced – it can simply and plainly exist. 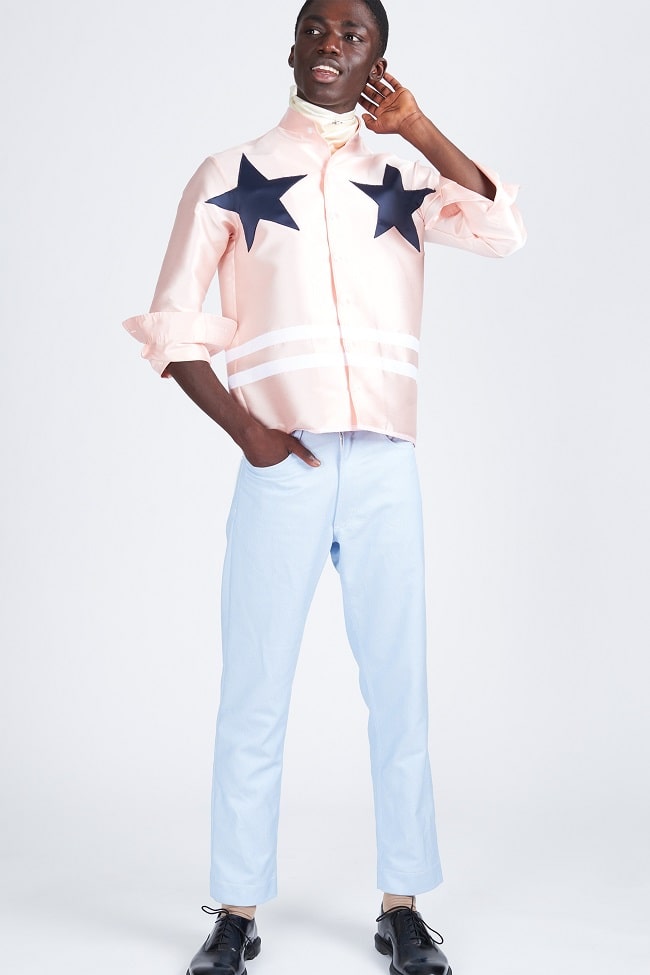 The sudden shift toward pastels and the arrival of rose pink and watermelon also paint a new scenario, one where these plush-tinted shades don’t feel like overt statement colours. That’s where Millennial pink went wrong. Although the hue itself matches well, thanks to a bluish undertone, its surface is practically irradiant, toeing into the echelon of neon without ever stepping over the line. Perhaps it’s fine if you’re having a slightly early ‘90s moment, but beyond the retro factor, a man thinking about neutrals and wearing that shade with the rest of his wardrobe turns away. We can’t blame him. Aside from the feminine context, the intensity of bubblegum and magenta hues never feels as if it fits in anywhere. The pastel version, lightly faded as if you left the garment out in the sun, dials that aspect down to the point it functions on par while playing off navy, white, tan, and forest green. 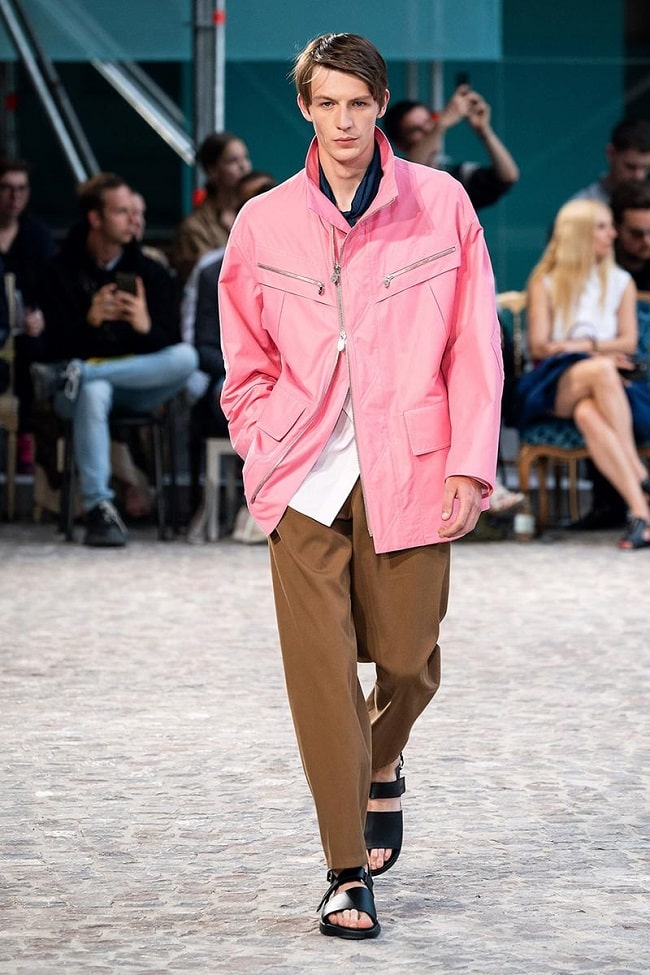 On the Red Carpet

Men’s Fashion Week is like Las Vegas: Often whatever’s seen on the runway stays on the runway. We’re not entirely talking about a presentation from Charles Jeffrey Loverboy or a similarly ornate display, however. Rather, even concepts from Burberry and Gucci get diluted down into an accessible form for everyday or going-out wear. The red carpet is a different beast – one that, until relatively recently, has been tamer in the menswear department but also serves as a real-time lookbook where men can think to themselves, “Maybe I can pull that off.” You might not have the movie star good looks, but the affair’s basic, consistent trappings offer a neutral framework. Through this lens, pink has been a consistent presence since last year. Although some displays, like Lil Nas X’s hot pink suit complemented by a harness and fishnets fits more in line with a Fashion Week event, more subdued displays from Jason Momoa, Nicholas Hoult, Mahershala Ali, Chadwick Boseman, and Timothée Chalamet appeal to the accessible end, with slim fits, softer velvet and corduroy fabrics, and classic presentations highlighted by the lighter, more feminine hue. The result isn’t so much a display of gender diversion as it is an alternative to both traditional symbols of masculinity and the oft-uninspired menswear red carpet getups. 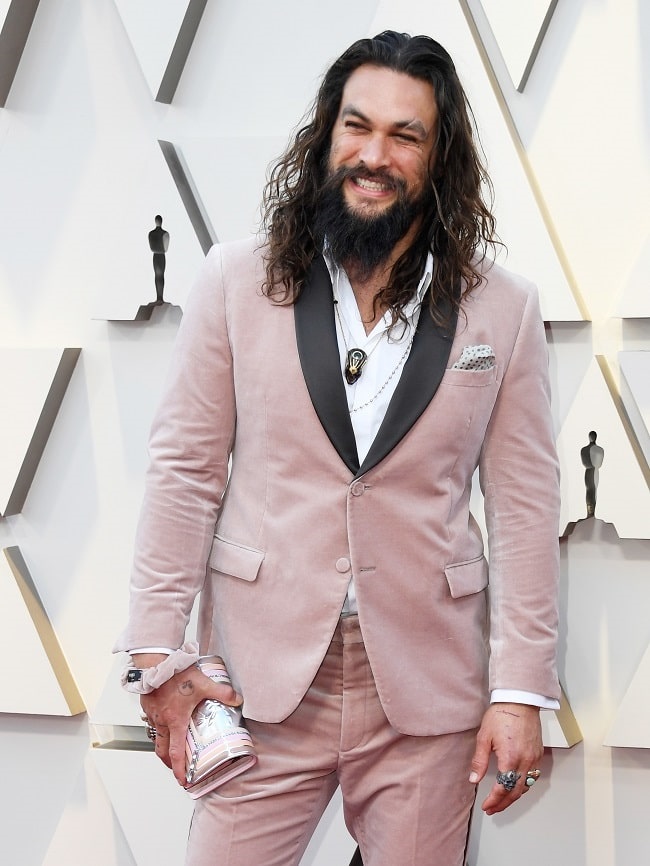