THE MILITARY’S INFLUENCE ON MODERN MENSWEAR 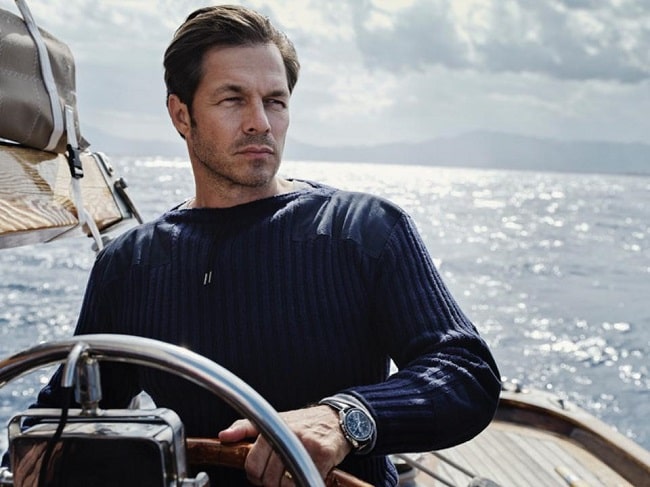 When you have to suit up thousands of men for training and battle, you have to be creative yet economical. Many modern aspects of clothing – mass production based on sizing, for instance – ultimately go back to this specific need. Yet, developments in design and construction – particularly keeping soldiers warm or cool enough for specific temperatures – didn’t disappear when the battles were over. The U.S. and Europe often saw troops bringing these garments with them – or preferring certain cuts – as they returned to civilian life.

Most modern-day studies of the military’s influence on menswear focus on the 20th century. Yet, this relationship is firmly rooted in the early 19th century, specifically the Napoleonic Wars, which, through multiple sources, influenced how men’s suits were eventually designed. Today’s three-piece suit ultimately draws from the era’s waistcoat and single-breasted jackets worn by the French army and double-breasted jackets sported by the Russians. Unlike the present pace of men’s fashion, these developments weren’t immediately apparent. Instead, they trickled down into civilian wardrobes through tailoring techniques and items like the frock coat, which situated the armholes higher and featured a single- or double-breasted silhouette. Toward the beginning of the 20th century, men’s three-piece suits consistently incorporated many of these aspects. 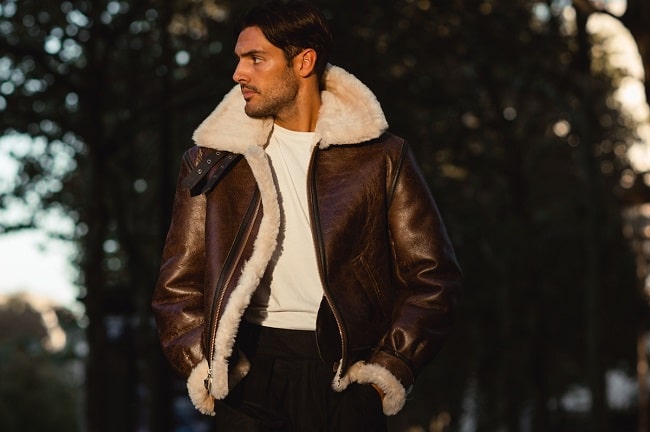 Into the 20th century, tailors – who often simultaneously designed for soldiers and civilians during the 19th century – played less of a role in this pattern. Particularly after World War I, soldiers who had spent the past few years in looser, more informal uniforms didn’t suddenly return to structured suit jackets and waistcoats. Instead, from chinos to T-shirts and denim, they took these garments or sought out similar silhouettes as they returned to civilian life and ultimately helped normalise what we today consider casual fashion. The wide adoption of denim – previously a cowboy and workwear staple that the U.S. Navy wore during World War II – as well as the T-shirt as a proper shirt go back to these sudden, historical shifts. Toward the second half of the 20th century, civilians could find many of these items with ease at military surplus stores. In turn, secondhand military supplies like field jackets and eventually camouflage made their way onto college campuses, were preferred by outdoor enthusiasts for their quality, or were appropriated to make an anti-war statement. In thinking about this pattern, many of today’s menswear staples originated in or became more widespread through military usage. 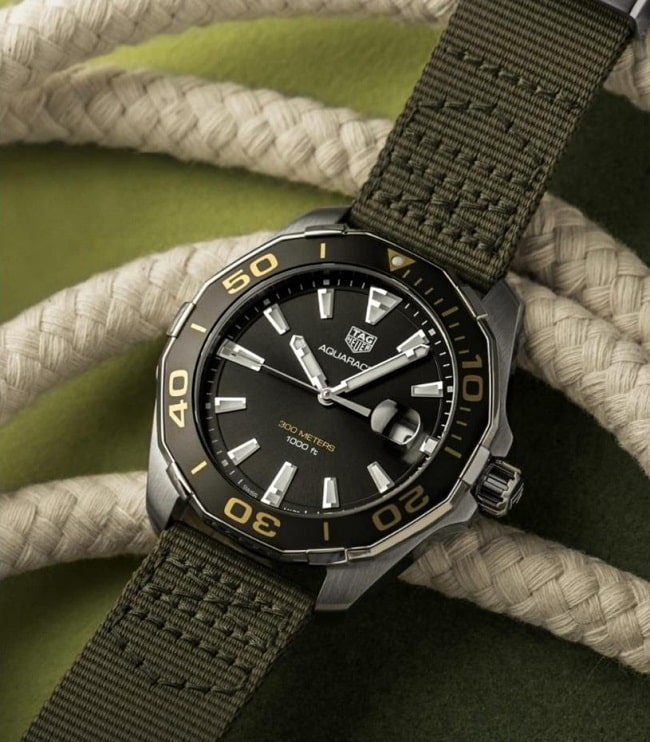 Although both are separate trouser styles, they have a shared history going back to the British military in India. The British noticed how Indian soldiers dyed their uniforms with tea leaves to match the terrain, rather than stand out against it with bright white or red hues. In turn, starting in the 1840s, British soldiers’ uniforms were dyed a similar yellow-brown shade, done at the time with mulberry juice, and the colour was called 'khaki,' a word in Persian and Hindustani meaning 'dust.' While the shade was altered through the Second Boer War, other countries eventually adopted this approach, dyeing cotton twill to match the surroundings – essentially, a precursor to modern-day camouflage. Stemming from this, the Spanish had their own version, made with twill material dubbed “pantalones chinos” in reference to its Chinese origins. Toward the end of the 19th century, the U.S. Army started using the same material for uniforms given to troops stationed in the Philippines during the Spanish-American War. By 1902, these cotton twill trouser became a standard-issue garment for the U.S. Army, which shortened their name to simply 'chinos.' Following World War II, the U.S. saw an influx of soldiers using the G.I. Bill to go to university, and as former troops arrived on campuses, they continued to wear this garment. By mid-century, chinos became a staple of Ivy League or collegiate dressing and lost many of their military associations. 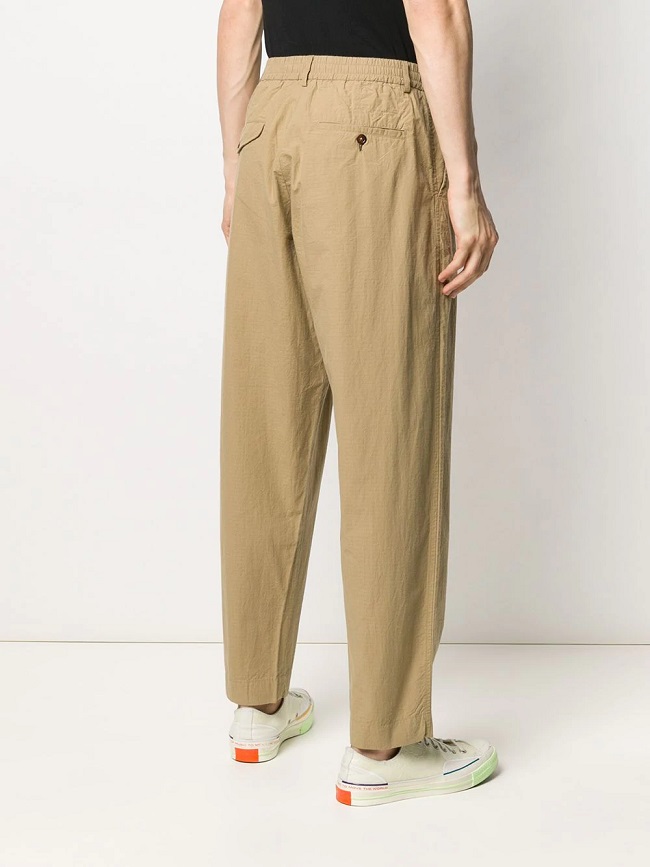 Like khakis, cargo trousers have their origins in the British military. In the years leading up to World War II, the British military introduced wool serge trousers featuring two leg pockets with flaps: the right was a field dressing pocket, and the left was meant to hold a map. The U.S. adopted this design not long after, adding knee pockets for the purpose of holding onto extra ammunition.

Up until the early 20th century, a man wanting to tell time wore a pocket watch. Wrist watches, by contrast, were fashion accessories primarily geared toward women. Although railroad systems influenced modern-day watch movement, widespread adoption of wrist watches – and their masculinisation – goes back to World War I. Beyond not having to physically reach for a pocket watch, consistent, uniform time helped soldiers prepare for battle and create seamless attack formations.

Another style dating back to the Napoleonic Wars, what’s now called the Blucher shoe allegedly originated when Prussian general Gebhard Leberecht von Blucher Furst von Wahlstatt requested a more streamlined, easier-to-lace-up boot for soldiers. The result featured two leather flaps with laces – rather than a single straight design – that the wearer could simply draw together above the ankle with the perforated eyelets and tighten or loosen as needed. 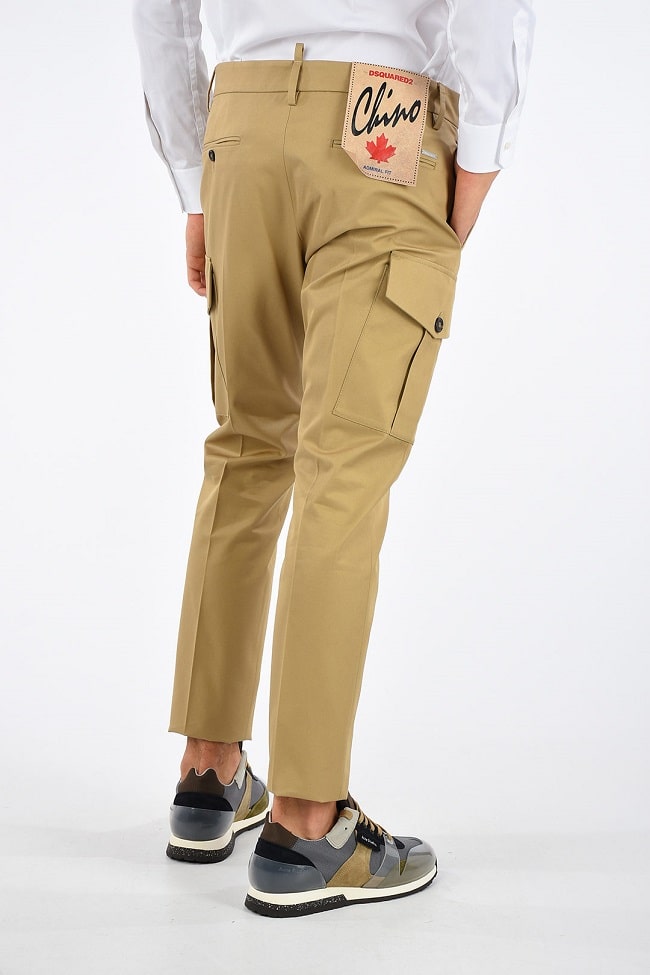 By name, desert boots exist as a tall, tactical silhouette in a sandy brown shade. However, the more casual, civilian version – a low-height ankle boot with a rounded toe – dates back to World War II, with the British military stationed in modern-day Myanmar. There, Nathan Clark noticed that soldiers would stay cool in the humid, tropical conditions with a light-coloured boot featuring a textured crepe sole. The soldiers observed had previously picked up this style at a market in Cairo, Egypt, and after returning to the U.K. following the war, Clark developed a similar silhouette for mass production. 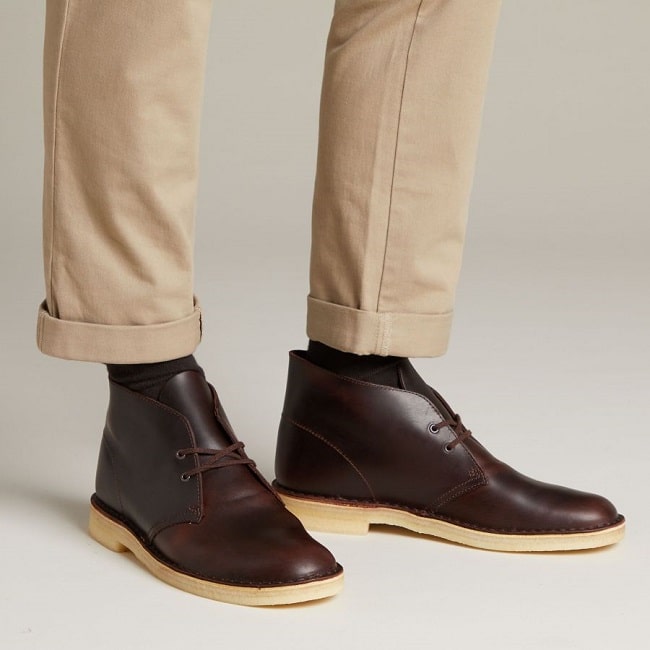 In the present, many still associate this teardrop silhouette with the movie Top Gun. Yet, while aviator sunglasses were developed specifically for military use, their design goes back roughly 50 years before the movie. In 1936, Bausch & Lomb created a pair of sunglasses meant to replace the clunky, uncomfortable goggles pilots had to wear at the time. Aviator sunglasses retained the goggles’ key feature – offering a full range of vision by completely covering the eyes – and further helped with reducing glare from the sun. Two decades later, American Optical (AO) developed a more angular silhouette – dubbed the Navigator – that improved upon the initial aviator and was adopted for standard use by the U.S. Military. 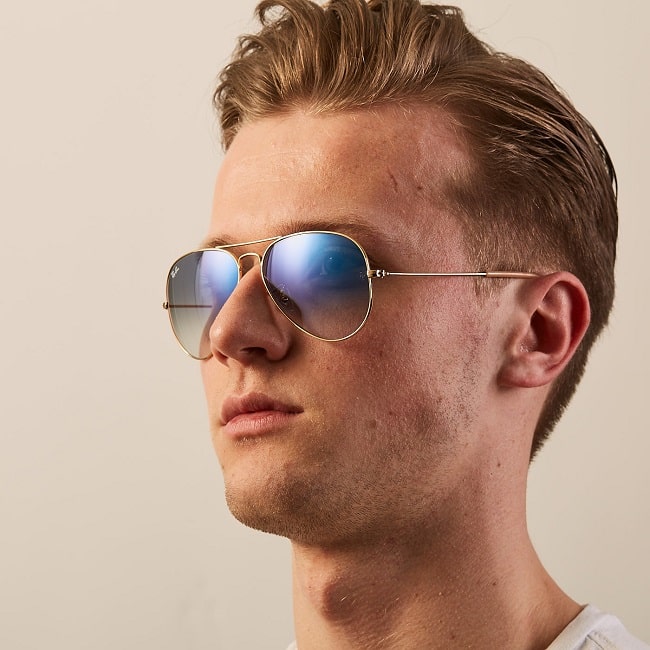 Unless you’re a major war buff, many today might not realise that World War I-era fighter planes didn’t have enclosed cockpits. Pilots, as such, had to travel at fast speeds in high altitudes while being directly exposed to the elements. The Royal Flying Corps provided soldiers with long-length leather coats; however, in the U.S., the Army’s Aviation Clothing Board attempted to improve upon this design with its leather flight jacket. These early prototypes shortened the length, so that it hit at the hips, and included flaps to block out the cold, fur lining for warmth, fitted cuffs and a waist to help the garment stay in place, a zippered front, and snap pockets for storing equipment and gear. This silhouette, given to the U.S. Air Force during World War I, eventually became the standard-issue A-2 bomber jacket. For menswear today, the A-2 is what many call a pilot or flight jacket. The bomber, in its most modern sense, goes back to the MA-1, developed and introduced in the 1950s. The MA-1 slimmed down and streamlined the pre-World War II versions to lessen the bulk and, at the same time, did away with the fur collar. As well, building off the B-15 jacket, the MA-1 utilised slash instead of snap pockets. Furthermore, while MA-1 jackets initially utilised leather, nylon eventually became the norm for its lightweight durability.

If you’re being fully authentic, a peacoat can be classified as a nautical-originating style. Sailors in the 18th century started using these wool garments, made out of 'pijjekker' or 'pilot' cloth – a heavyweight twill with nap on one side for warmth. Due to the fabric’s ability to shed moisture while retaining body heat, the U.S. Navy eventually brought on the peacoat, utilising a longer silhouette with a double breast and three or four sets of buttons that could be worn over other garments. 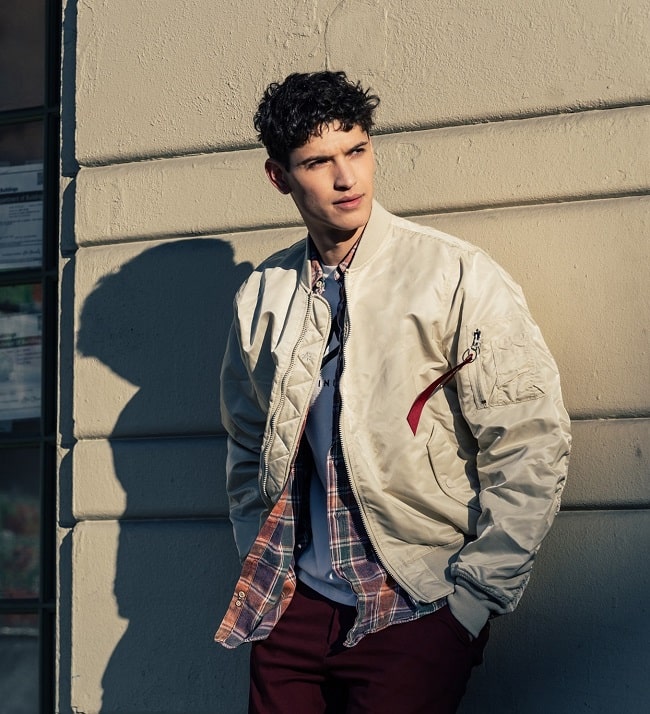 The modern-day trench coat frequently gets attributed to Burberry’s development for the British Army. Yet, while the brand’s water-resistant garment improved over the rubber prototypes from decades earlier, the silhouette itself has roots in French and Russian uniforms from the Napoleonic Wars. As the biggest difference, those long overcoats utilised wool – making them more like a lengthier peacoat. The version Thomas Burberry developed – and that was eventually standardised by the British military – utilised this silhouette but constructed it out of gabardine, a significantly more lightweight material. Yet, gabardine was also extremely durable and water resistant, and in turn, the garment gave soldiers more freedom to move and carry their supplies.

Using cloth tied around or attached to the neck to identify status and rank dates back as far as the Romans. The modern-day knotted shape, however, originated during the Thirty Years’ War in the 17th century, in Croatia specifically. Forming the template for Jesse Langsdorf’s creation in the early 20th century, Croatian soldiers arrived in France wearing red scarves tied around their necks, which the French initially called “La Croate,” later evolving into the more familiar term “la cravate.”

The T-shirt began as an undergarment, which, toward the middle of the 20th century and influenced by the film stylings of Marlon Brando and James Dean, evolved into a casual shirt. A few decades before the T-shirt emerged in this fashion, it was given to U.S. Navy members during the Spanish-American War as an undergarment. Up to this point, men’s undergarments looked like present-day henleys, with long sleeves and buttons, or were a full-body union suit. Due to the climate where soldiers were fighting, they eventually starting wearing this undershirt without anything – no jacket, no button-front shirt – on top, and the trend continued back into civilian life. 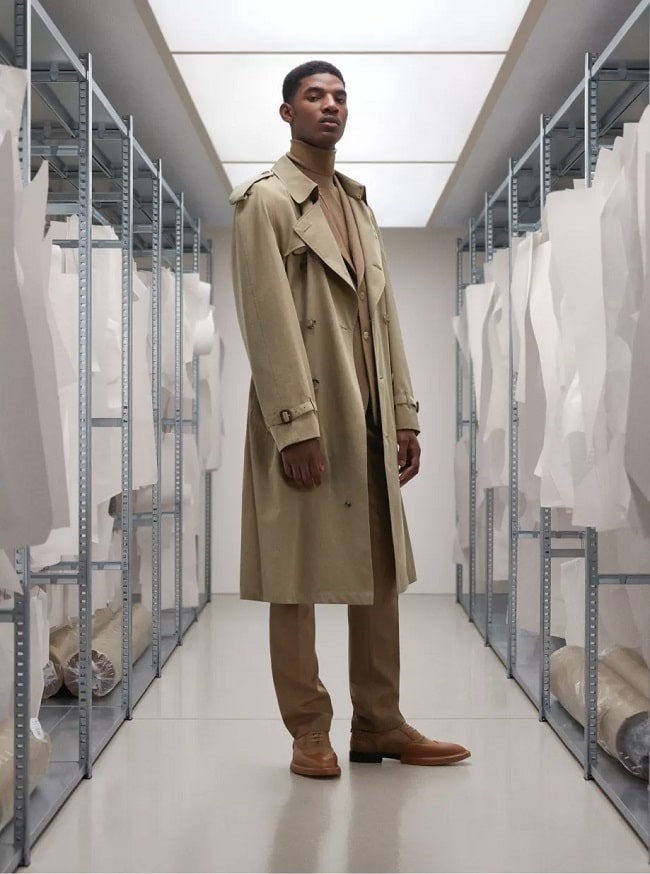 Of all garments, the cardigan seems the least likely to have a military past. Yet, its beginnings point back to the Crimean War, when James Thomas Burdenell, better known as the Earl of Cardigan, requested a sleeveless, knit wool waistcoat for British cavalry officers. Eventually, full sleeves were added for more coverage.

Widespread Use of Layering

While no one can claim to have invented layering, the U.S. Army’s Quartermaster Corps introduced a new uniform concept in 1943 that has not just defined American military uniforms since but has further shaped how civilians dress for cold conditions and how outdoor gear gets tested. The uniform, called the M-43, involved a multi-garment system beginning with a wool undershirt, a long-sleeve flannel mid-layer, a sweater, and a cotton sateen field jacket with flap pockets on the chest and sides. What looked like the precursor to the U.S. Army’s current Extended Cold Weather Clothing System (ECWCS) involved wearing multiple thin but not light layers underneath a larger jacket for sub-zero temperatures and removing the mid-layers for warmer conditions. Later, as outdoor-specific clothing brands started cropping up in the ‘60s and ‘70s, the military’s research formed the foundation for parkas and other widely available cold-weather and layering pieces. 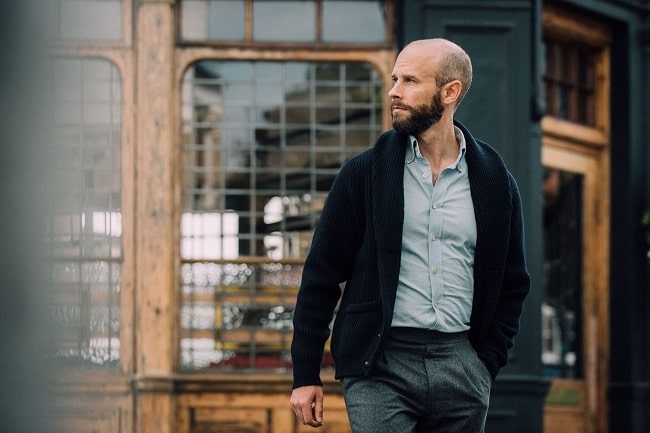