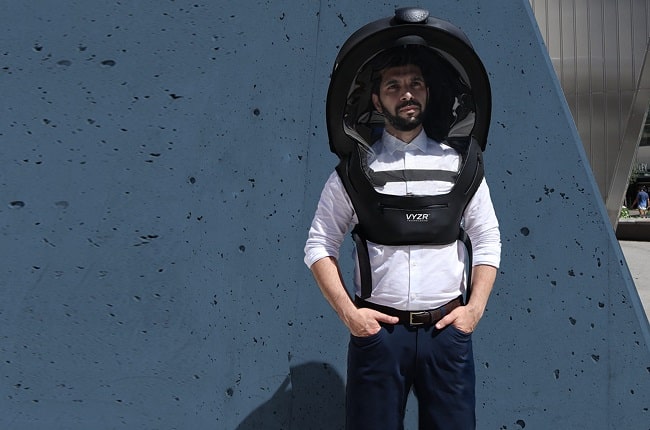 It was bound to happen. Just as Burberry and Off-White introduced luxury face masks back in spring, Louis Vuitton debuted its luxury face shield in September. Dubbed the LV Shield, Louis Vuitton’s upscale PPE offering looks the part, but its details and design differentiate it from standard clear plastic options. Specifically, a closer look reveals monogram trim, an elastic monogrammed headband to stay in place, and embossed gold studs surrounding its hard-plastic body. In use, its photochromatic construction transitions from clear to tinted once you’re out in the sun. Once flipped up, it resembles a retro yet futuristic visor. At the moment, the LV Shield is retailing for £750 or $961 USD and debuted with Louis Vuitton’s Cruise Collection. Retailers are expected to start carrying it at the end of October, but chances are, like those grailed Off-White face masks, you’ll have a tough time securing one, unless you’re willing to pay for the markup. While it’s easy to dismiss Louis Vuitton’s offering as tone-deaf when many across Europe and the U.S. are feeling the effects of a global recession, or ultra-bougie when, just months ago, PPE was scarce, it also begs the questions: Who is luxury PPE for, and beyond the façade and symbol, is it actually effective?

The Start of a Trend

It seems so long ago now, but back in April, hospitals and healthcare workers in the U.S. and Europe experienced personal protective equipment (PPE) shortages. At the same time, individuals still expected to go to work – or simply buy groceries – were having trouble finding adequate face masks. As patterns for sewing your own and tips for using a bandana gained traction online, fashion brands who ordinarily would’ve been working on their collections shifted to mask and personal protective equipment. Among them were Louis Vuitton, Armani, Gucci, Prada, and Ralph Lauren, which kept their workforces busy during a sudden downturn and made a dent in PPE deficits. As hospital workers’ PPE needs were gradually addressed, brands began thinking about the average consumer – who, by this point, had to get creative with whatever they had around the home. Apparel brands started including face masks among their offerings, and from here, the luxury face mask found its footing. As the next phase, face masks are about as mundane and expected as shirts and trousers: Based on a recent report of the almost all virtual New York Fashion Week, brands now view these face coverings as integral to style. 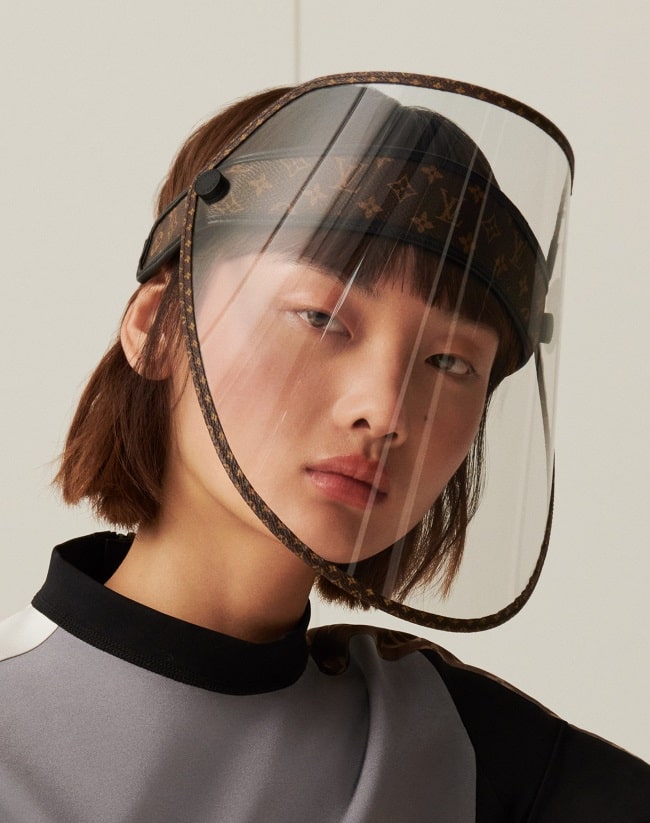 And, the brands that helped out early on are continuing to play a role. The BBC reported that Burberry pledged to donate 100,000 supplies to healthcare workers this year, and has since been awarded a £573,000 contract to continue manufacturing supplies. To date, its Castleford location has been upgraded to sew non-surgical gowns. As brands seek to meet consumers where they are – needing face protection but wanting it to match their style – patterns, sequins, and unique graphics are expected, as is a range of fabrics. Building off this is the luxury face shield, which has started receiving a similar upscale, fashion-centric treatment. Louis Vuitton isn’t the only brand to introduce such an option. Covidisor debuted a bubble-shaped face covering that’s more apt for a science-fiction movie. Invented by Nicholas Kosta and seen at New York Fashion Week recently on blogger Michelle Madonna Charles, this luxury face covering is priced under £200 and, as the biggest difference with the LV Shield, fully surrounds the head. Added to this, it includes an air-purifying respirator and lets the user show their full face – and any makeup – without visual obstructions. In this same vein, the iSphere also uses a globe shape for the same goal. As a differentiating factor, creator Marco Canevacci took influence from ‘50s and ‘60s science fiction, giving it a more retro look. The other option out there is a clear face shield designed to be worn like a pair of sunglasses. The Vue Shield, designed by architect Joe Doucet, the founder of Joe Doucet x Partners, is priced under £50. A hybrid design, it adds a full-face shield – although not one completely covering the wearer’s head – that slides on like a pair of sunglasses. Like the LV Shield, this option protects the nose, eyes, and mouth with a sleek design featuring a darker tint over the eyes. Perhaps making the luxury face shield appear modest is the tuxedo hazmat suit. Not a joke, designer Katja Cahill crafted one for presenters appearing at the recent Emmy Awards ceremony, having it look like a proper tuxedo from the exterior but designed like a full-body coverall for an additional degree of safety. 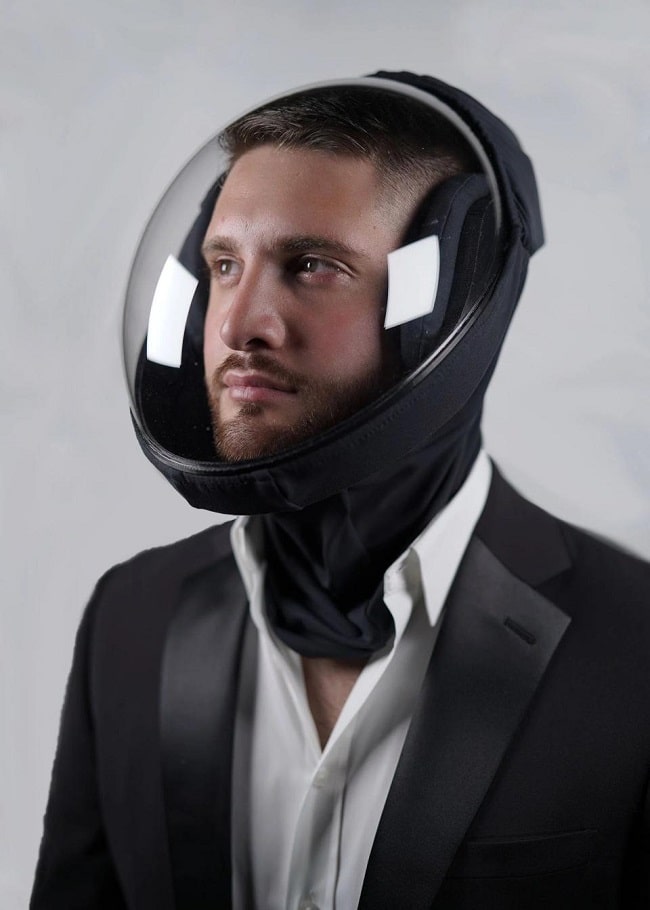 So, Are They Effective?

Luxury for luxury’s sake isn’t lost on the consumer. That’s why the Supreme brick can be outsold in minutes, or someone will buy a silver paperclip-shaped money clip from Prada. Still, a solid, ethical line should exist between superfluousness and elevated practical staple, and with luxury PPE, that’s not clear at the moment. After all, while you might not build a full house with Supreme bricks (assuming you can find that many), some consumer, surely, may expect the LV Shield to protect them a degree, rather than just be a fancy, monogrammed piece of plastic. At least in the U.S., where the debate about the merits and effectiveness of face coverings rages on, face masks have been given the O.K., while the Centers for Disease Control and Prevention (CDC) has yet to claim face shields are just as effective by themselves. Supporting the use of face shields in conjunction with masks, UCLA infectious diseases expert Dr. James Cherry is quoted in the Los Angeles Times claiming face shields protect the wearer from viral infections more than masks, which serve more to stem the spread of coronavirus-containing particles. Dr. Cherry claims that the face shield provide not just a physical barrier blocking particles but also prevent the mask wearer from scratching their face, which allows particles to enter the eyes and nose and spread the disease. 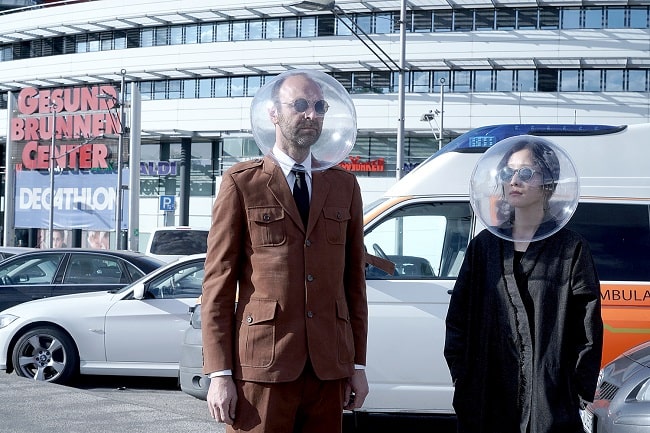 Dr. Cherry supports his stance with a study appearing in the Journal of the American Medical Association (JAMA) in the 1980s: Hospital workers in New York City caring for infants fighting off respiratory illness were less likely to pick up the condition when wearing goggles than without them. A study appearing in a more recent issue of JAMA echoes these findings: face shields can reduce viral exposure by a much as 96% when worn 18 inches from a coughing individual. Shields, from a practical standpoint, one-up masks in terms of maintenance: The user doesn’t have to throw them in the wash after use, and they doesn’t use textile fibers, which stretch out and become less effective at containing particles from the wearer’s mouth with time. A study published in the British Medical Journal found that users wearing masks are also more likely to take them off to talk, which defeats their purpose. The plastic making up a face shield, meanwhile, only needs to be handwashed and disinfected to remove any particles. Unlike textiles, the virus lives longer on plastic surfaces, making this step essential to keep yourself protected. 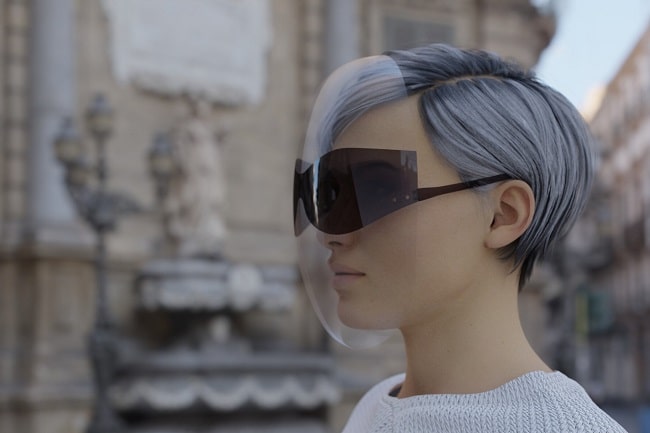