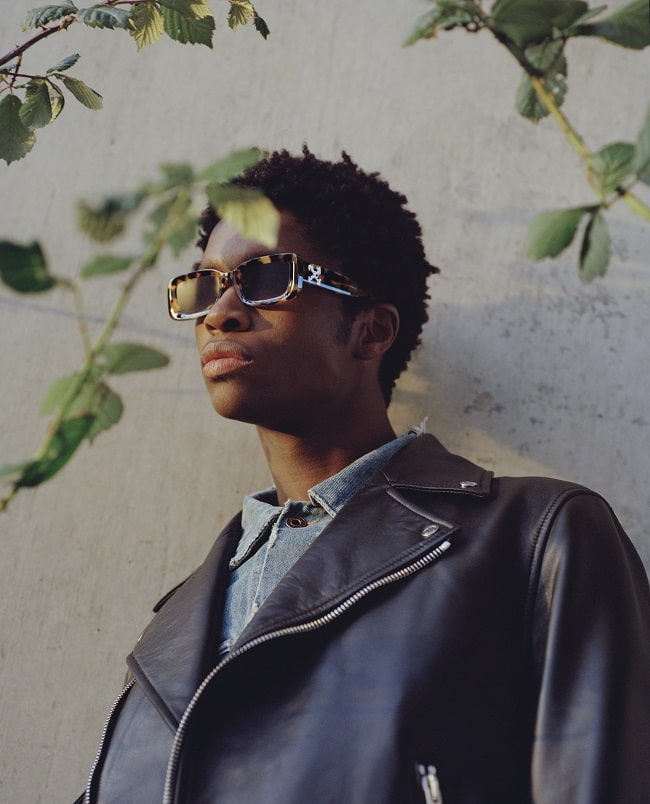 You can only take so much classic style before it’s time for a change. The #menswear shift over a decade ago set the tone for eyewear throughout the 2010s. If you were clad in a pair of wayfarers, Clubmasters, or aviators, you were sharp and ready for anything, and that silhouette, particularly with black or metallic elements, held strong until fairly recently. The Gucci-fication of fashion – of feminine elements directly influencing traditional menswear garments through cut, colour, and embellishments – didn’t reach a boundary with your shirt or trousers. Instead, past blazers and jewellery, it has spread to your eyewear, and nowhere is it more prominent than for 2021 – a point where most of us, unlike last year, expect to be spending more time outdoors.

What results is a mix of colours dashing from beyond black-metal-tortoise expectations, with clear acetate thrown in for a retro throwback. On the subject of nostalgia, forms you might not have worn since the early ‘00s – think wraparound athletic styles, as well as skinny frames – have predictably resurfaced. Yet, with more choices beyond the this-or-that dichotomy, with various widths and lines ripe for exploration, your face shape is always paramount in narrowing down the possibilities. For a primer, if your face resembles an oval, you have nothing to worry about – you can wear everything. Frames with more of a rounded shape, meanwhile, soften strong jaws and high cheekbones. Wayfarers and geometric frames have the opposite effect – adding angles to a more round or square face shape. Beyond those classics – which are taking more of a secondary role right now – we’re spotting the following for 2021: 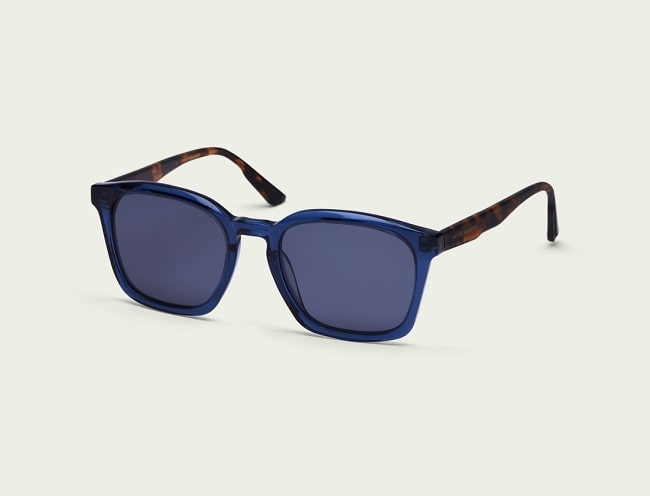 You might’ve heard these called John Lennon frames, but their longevity over the past few seasons has added less-blunted edges to wayfarer-like styles. The result straddles that retro-modern dichotomy, appearing like a mid-20th century silhouette with a bit more substance and heft. To this last point and overlapping with additional styles we’ll detail below, round sunglasses tend to feature a thicker frame and not-quite-circular lenses, perhaps with a keyhole in between or a bar over top for cohesiveness.

Geometric shapes aren’t entirely new: see those square wayfarers that popped up in the mid-2010s. Something’s different this time around – the predictability of squares and rectangles has opened up to innovation. More in common with obnoxiously large ‘70s-esque frames, you might spot something hexagonal, heart shaped, or even triangular, with few to no rounded edge in sight. Because the style errs toward the unusual – at least with what today’s man recalls – avoid the thick and coloured frames present for most of the season and, instead, seek out the simplicity of metal. 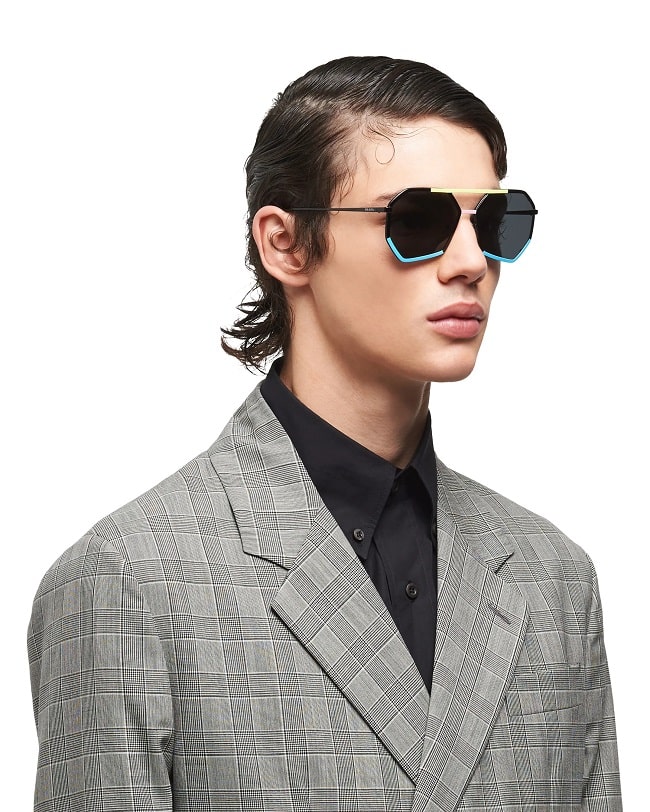 For classic sunglasses, you know the drill: black, metal, or tortoise, with a solid black or metallic lens. Yet, perhaps influenced by Harry Styles’ “Watermelon Sugar” video, infusing or going right toward bright shades across the frame and lenses provides a departure from by-the-rules ordinary. Your choices, however, don’t begin and end with rave wear-like neon hues. Even outside of festival season, you can still turn heads with a strong navy, grey, burgundy, brown, or deep orange frame, preferably playing off a neutral black lens. In reverse, stick with a metal or black frame but go for a ‘90s Britpop vibe with some solid blue or purple lenses in between. As a third option, don’t discount monochrome: for instance, a blue frame surrounding a cool sky-coloured lens. The key here is providing a dash of colour without drawing all attention toward your eyewear.

This other retro-futuristic trend saw its heydays back in the ‘80s and ‘90s, and it’s getting revived again through transparent acetate frames. Clear and see-through colours have an almost ethereal character, allowing dark or mirrored lenses to seem as if they’re suspended in mid air. If coloured frames come off too bold and saturated, a degree of transparency – as if you toned it all down without making it disappear completely – literally lightens things up. Light passes through, having the glossy look of an ice cube that never melts. 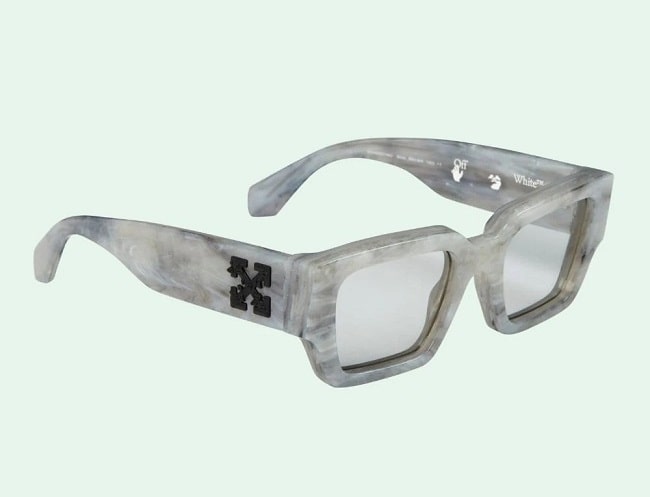 Mid-‘90s, everyone seemed to be wearing these. Oakleys or a pair from the mall without impact resistance created that fly-eye look with half- or full elliptical lenses that wrapped partially around the wearer’s face. From a practical standpoint – and please note, this is really only if you choose a more technical pair – the style provides a greater degree of coverage. Strictly thinking about style, the smooth edges surrounding the lenses contrast against the narrow, often straight sides giving them a stronger edge than the round frames described above.

You’ll get late ‘90s boyband vibes – especially by pairing coloured lenses with double denim. Or else, should you strive for solid black, it’s all nostalgic anarchy from The Matrix and Hackers. You can’t get any kitschier than this, and perhaps that’s totally intentional. While it might be a bit of a challenge, steer away from irony, and consider the minimalism this style offers. 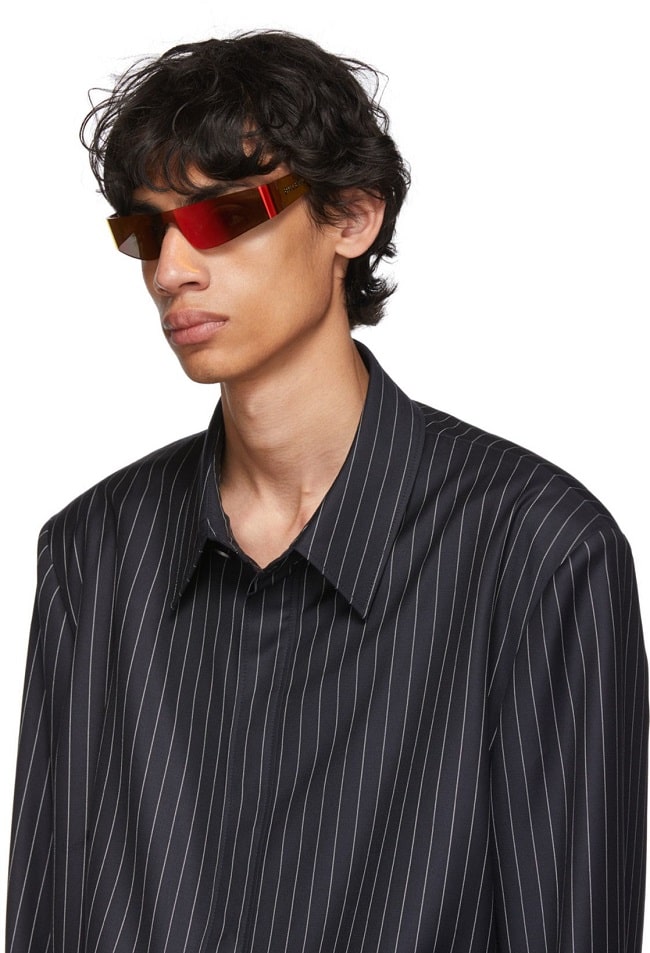