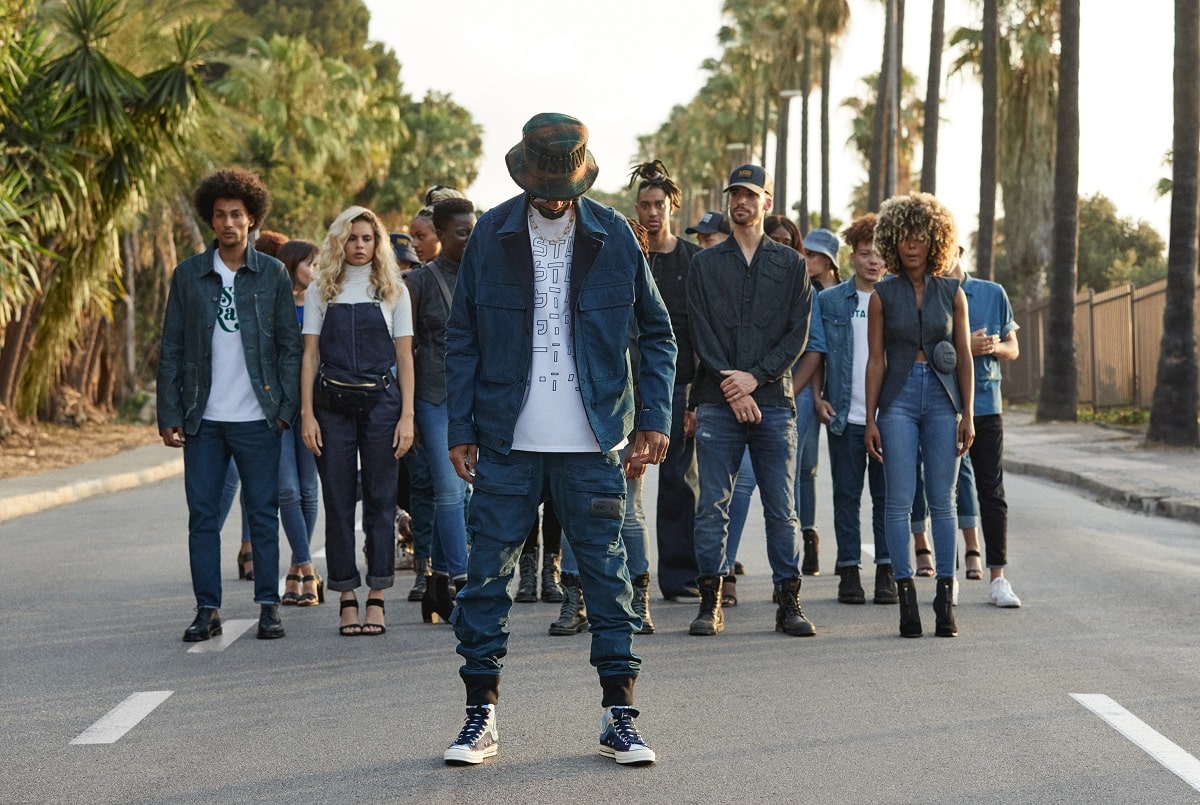 G-Star RAW announced the latest iteration of its Hardcore Denim campaign, this time featuring hip-hop icon Snoop Dogg in a series of military- and ‘90s’ influenced styles made of sustainable materials. The collection and campaign are accompanied by a new, specifically recorded track from the multiplatinum artist, titled “Say It Witcha Booty,” which provides the soundtrack to a promotional video highlighting women’s, men’s, and select unisex styles. The campaign officially launched on September 8th.

G-Star began in 1989 with a goal to create luxury denim for a more urban consumer. While this angle reflected the approach of many ‘80s designer jeans brands, G-Star looked beyond the label to superior craftsmanship – specifically, the use of raw, untreated denim. Delivering silhouettes resonating with consumers is an approach combining three-dimensional and architectural technologies. Over the years, G-Star RAW has elevated its core product by experimenting with multiple dyes and washes – from darker indigo to bleached – as well as various fabric textures. 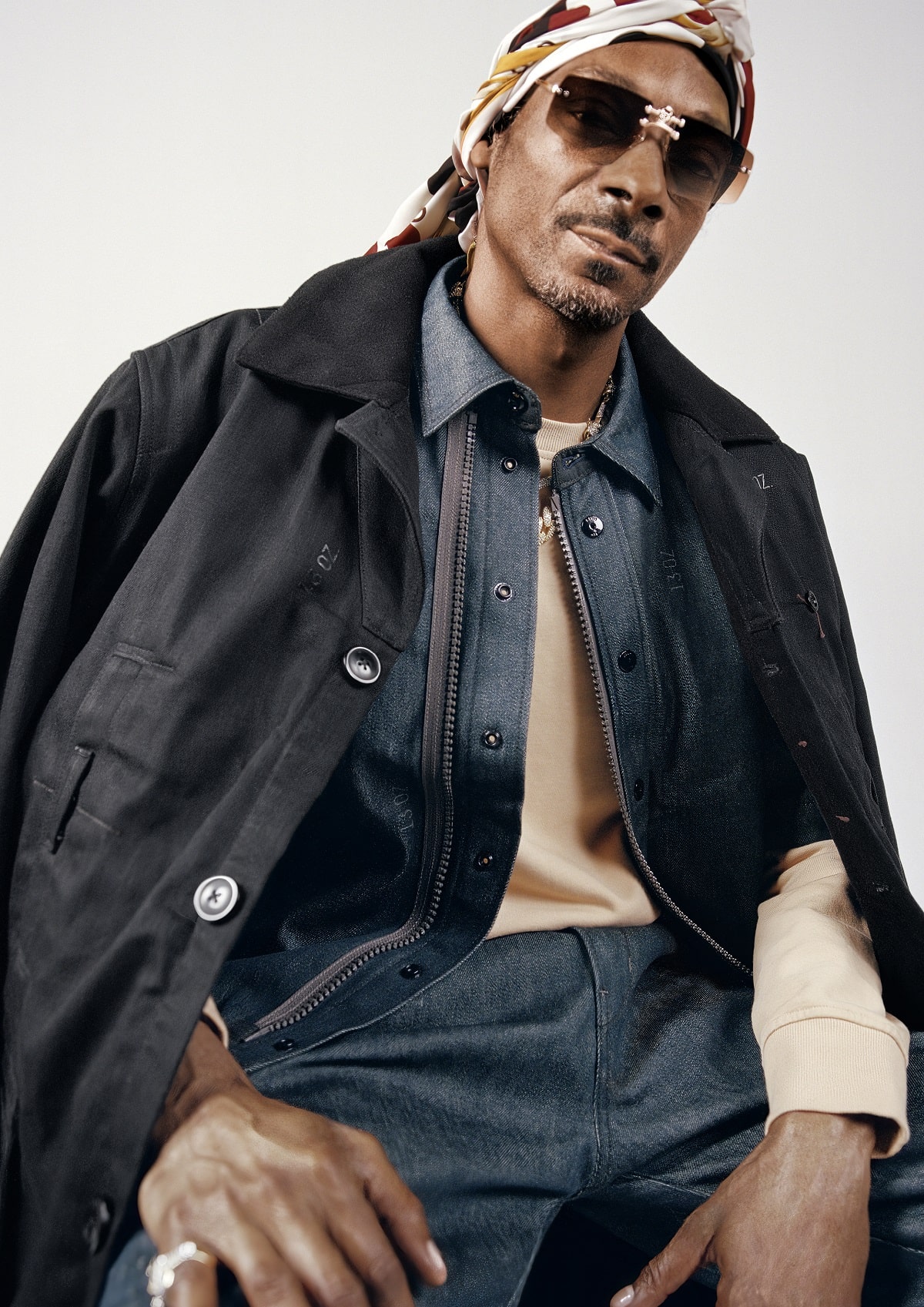 These developments have set the tone for other urban-centered brands and have rippled through the streetwear world. More recently, G-Star RAW started pioneering sustainability through its fabrics, from how the cotton is grown and processed to the use of recycled fibers.

The Hardcore Denim collection builds off this mission, delivering a premium product embodying G-Star RAW’s craftsmanship and attunement to detail and the history of denim. At the same time, said collections don’t simply retread classic territory through new collaborations or fabrications. Instead, they test what the brand – and what the medium of denim – can do. In the case of this latest effort, that’s fusing sustainable Japanese denim with a sharp rather than superficial eye to military silhouettes and construction.

Hardcore Denim further brings other innovators into the mix. Snoop Dogg seems like a logical choice for this purpose. Pioneering West Coast hip-hop since the mid-‘90s, he’s released 19 studio albums – including multiple Billboard chart-topping releases – over that period, resulting in over 40 million records sold. A modern-day hip-hop mogul, he’s since branched out into television, including producing and co-hosting Martha & Snoop’s Potluck Dinner, for which he was nominated for an Emmy. Other similar efforts include MTV’s Mary + Jane, TNT’s Joker’s Wild, and Netflix’s Coach Snoop. 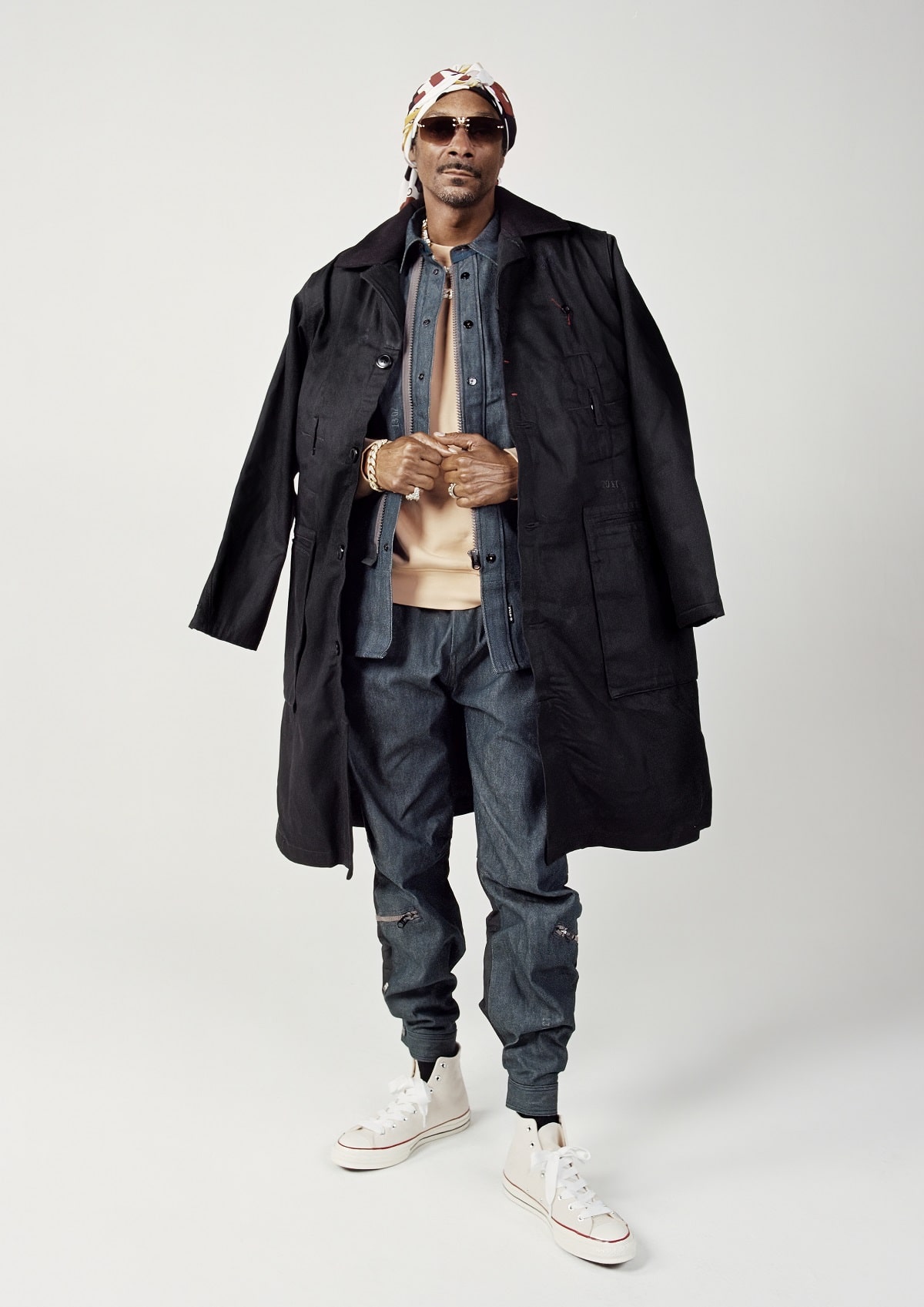 “I’m teaming up with G-Star, because we are both pushing the field, staying ahead, cutting the edge,” he explains in a press statement. “We are both masters of our craft – leading the game.”

While the video focuses mainly on the shape-highlighting women’s jeans, Snoop Dogg sports a number of men’s styles. Among them are two made with Wakoucha Denim, a 13.25 oz. 3x1 right twill material woven in Japan. The solid, darker hue veers away from expectations by combining five dips of indigo with a sulfur-based dye. 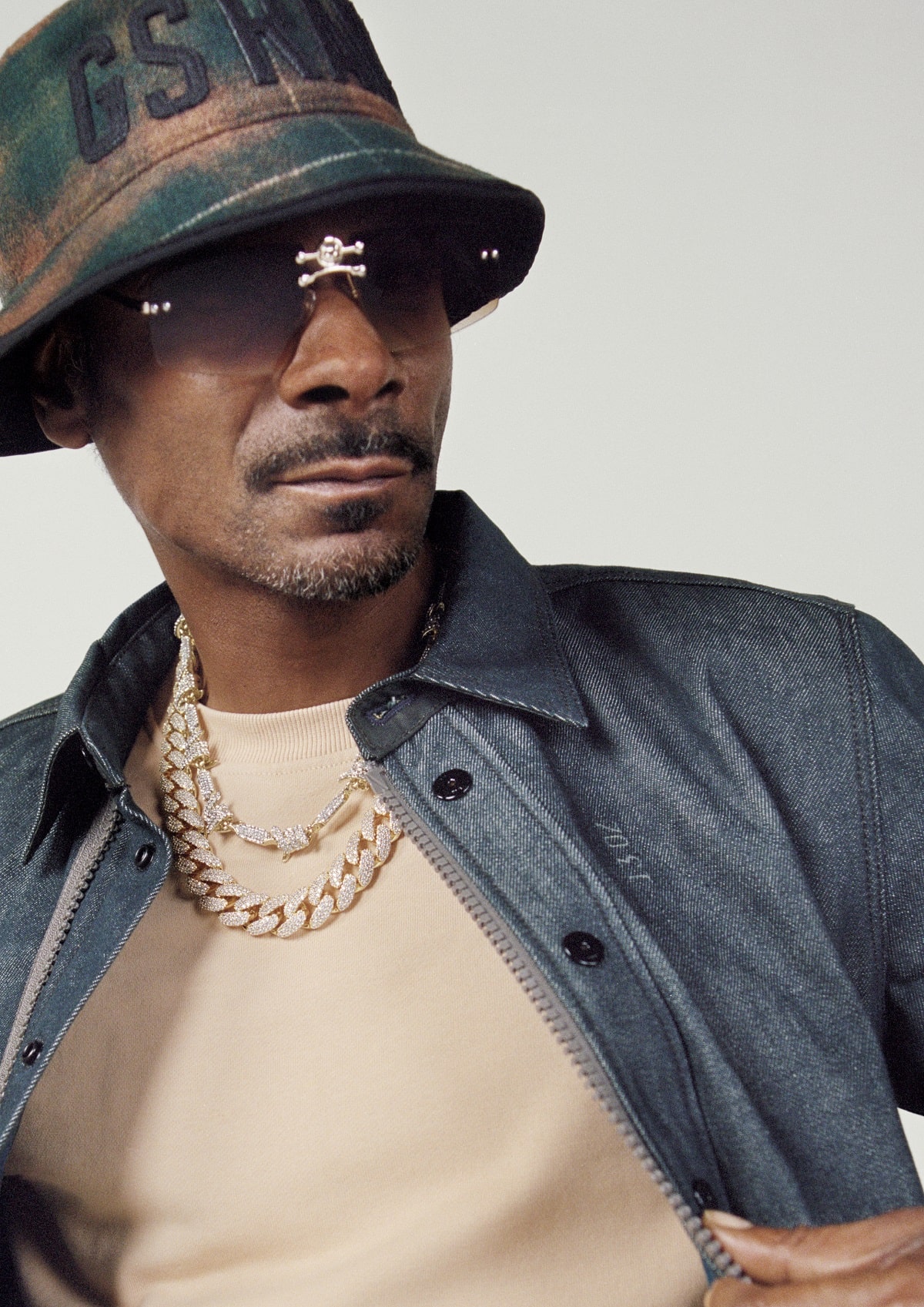 The GSRR 3D Pilotte Jeans also start from a military-inspired foundation – this time, 1940s U.S. Air Force A-9 flight trousers. In line with the wider fit we’re seeing from men’s jeans, these feature a straight cut with an additional side-entry rear pocket along with the typical five-pocket fabrication.

Other denim garments utilise Antique Worker Denim, an organic cotton-based material in a 3x1 right-hand twill pattern. This is blended with recycled polyester and a touch of elastane for a more flexible fit without compromising the denim’s strength or structure. The Utility Flap Pocket Jacket uses this denim material with a belted construction and 1930s’ battle dress uniform (BDU) inspired silhouette. The Relaxed Tapered Cargo Trousers are as exactly as they sound – a slimmer, military-inspired style with zipper closures, welted pockets, and a 3D flap pocket.

Beyond two types of denim, other styles incorporate organic cotton or recycled materials. Among them is the Logo Badge Sweater, a fine-knit, sweatshirt-inspired style made with G-Star RAW’s 100% organic cotton Heavy Hodson Sweat Unbrushed material and featuring a terry-textured interior. 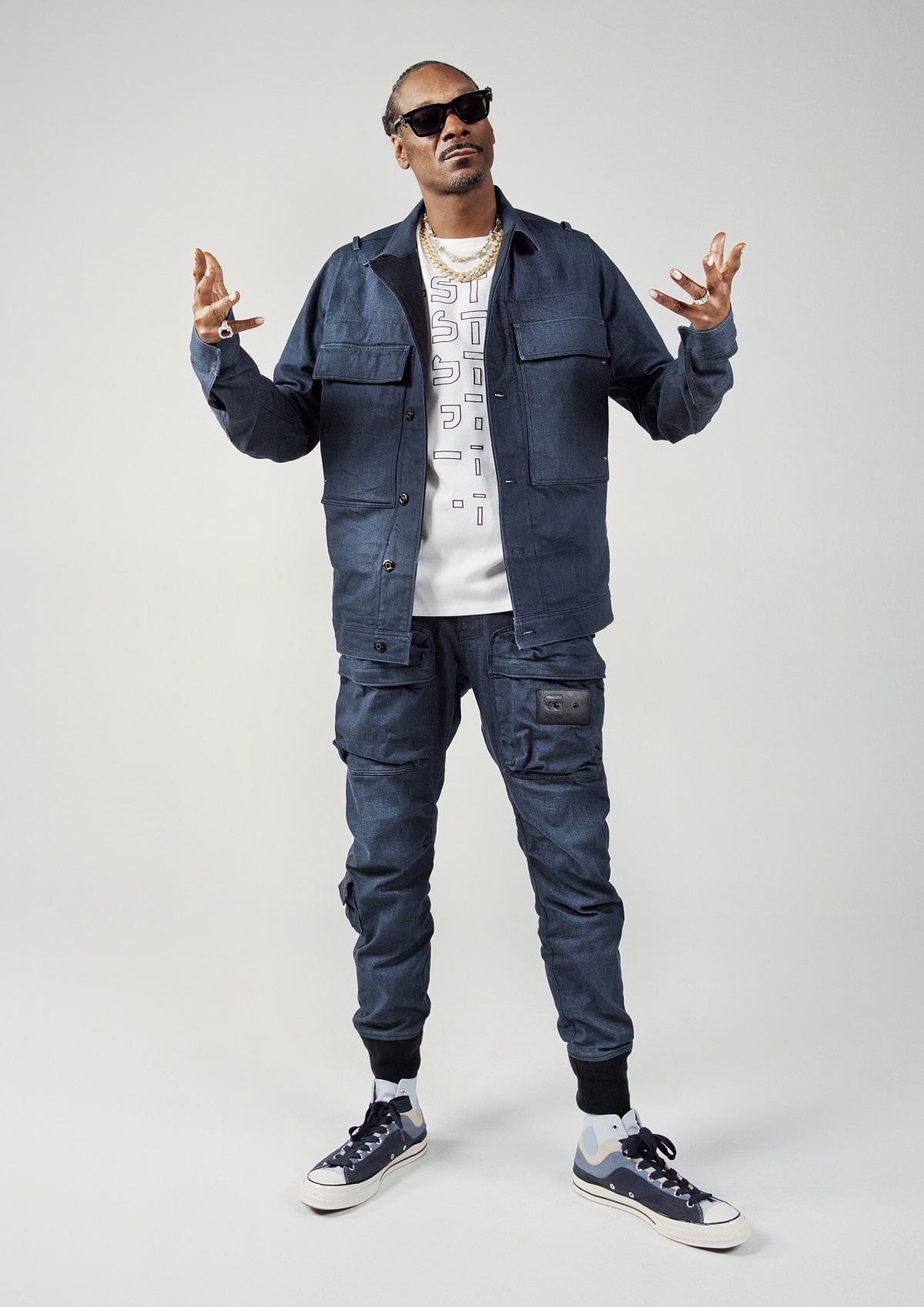 Also on the logo end is the Embro Gradient Graphic Lash T-Shirt, constructed out of 100% organic cotton jersey and with a graphic generated via computer embroidery.

Considering Snoop Dogg’s influence, accessories take a distinctive ‘90s turn – although one that, from a period standpoint, meshes with the apparel’s clear military influences. Among them, a bandana made from Auniq Weave Recycled polyester stands out with a repeating Arrow logo print.

A multicoloured check-pattern bucket hat makes use of recycled polyester and recycled wool to create a woven twill material giving a felt-like feel. What would’ve come off a tad predictable takes influence from retro overshirts while adding in modern-day baseball cap features like metal eyelets for greater breathability.