UMBRELLAS: WOULD YOU PART WITH LOTS OF LOLLY FOR A BROLLY?

Written by Samuel Walters in Essentials on the 6th October 2021 / Umbrellas: Would You Part with Lots of Lolly for a Brolly? 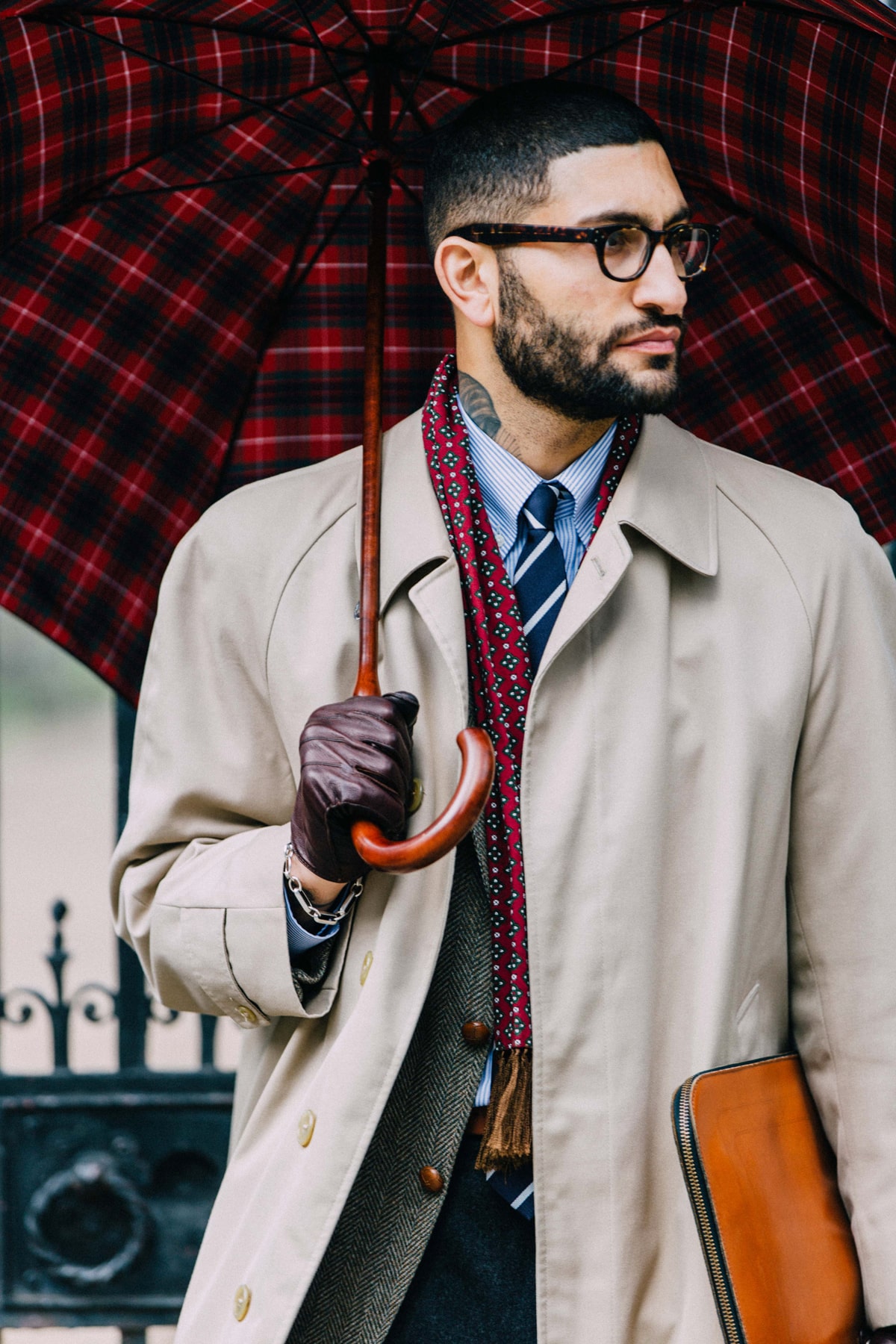 Someone once told me that he didn’t think men should use umbrellas. A bit sissy, he thought it. A bit wet, he might have punned, had he been the punning kind. (He wasn’t.) Back then, I agreed with him.

After all, what is the umbrella associated with? There’s dear old Mary Poppins, floating about town under her umbrella, complete with her miraculous carpet bag and spoonful of sugar. And then there’s the traditional city gent, bustling along with neatly furled brolly and bowler hat. (Incidentally, this is the inspiration for the Hackett logo – a smart bowler sat above two crossed umbrellas.) 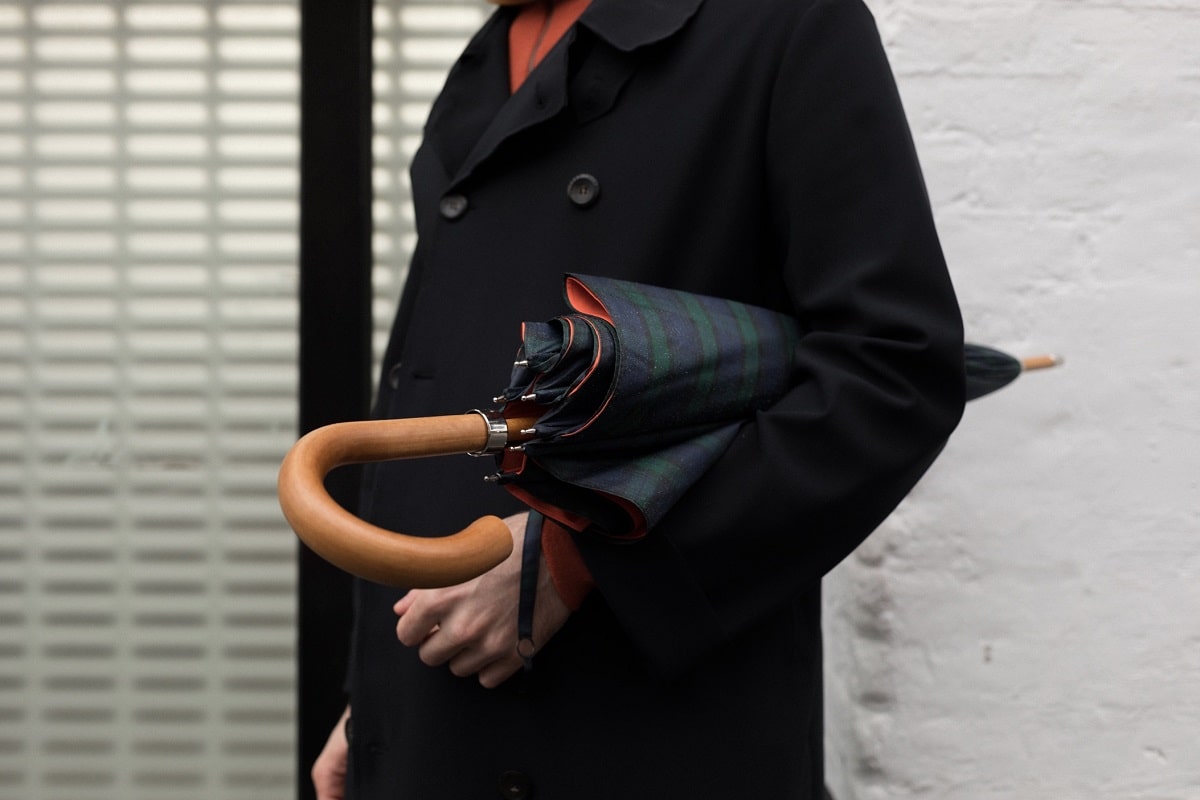 The image is refined. It’s gentlemanlike… but not tough. You wouldn’t exactly catch the Marlboro Man cowering under a brolly, would you? When the heavens open in Marlboro Country, just a Stetson and a cigarette will do to protect him from the rain. …And perhaps a duster. (That’s the name for those long cowboy-style trench coats. I know because I just looked it up.)

However, time passes and people change. I’m amazed to look back and think I ever agreed with this umbrella-hater. Now, more than a decade on, I have learnt to fully embrace the umbrella. And I don’t mean those piddling little fold-up ones either. I’m talking about the biguns. 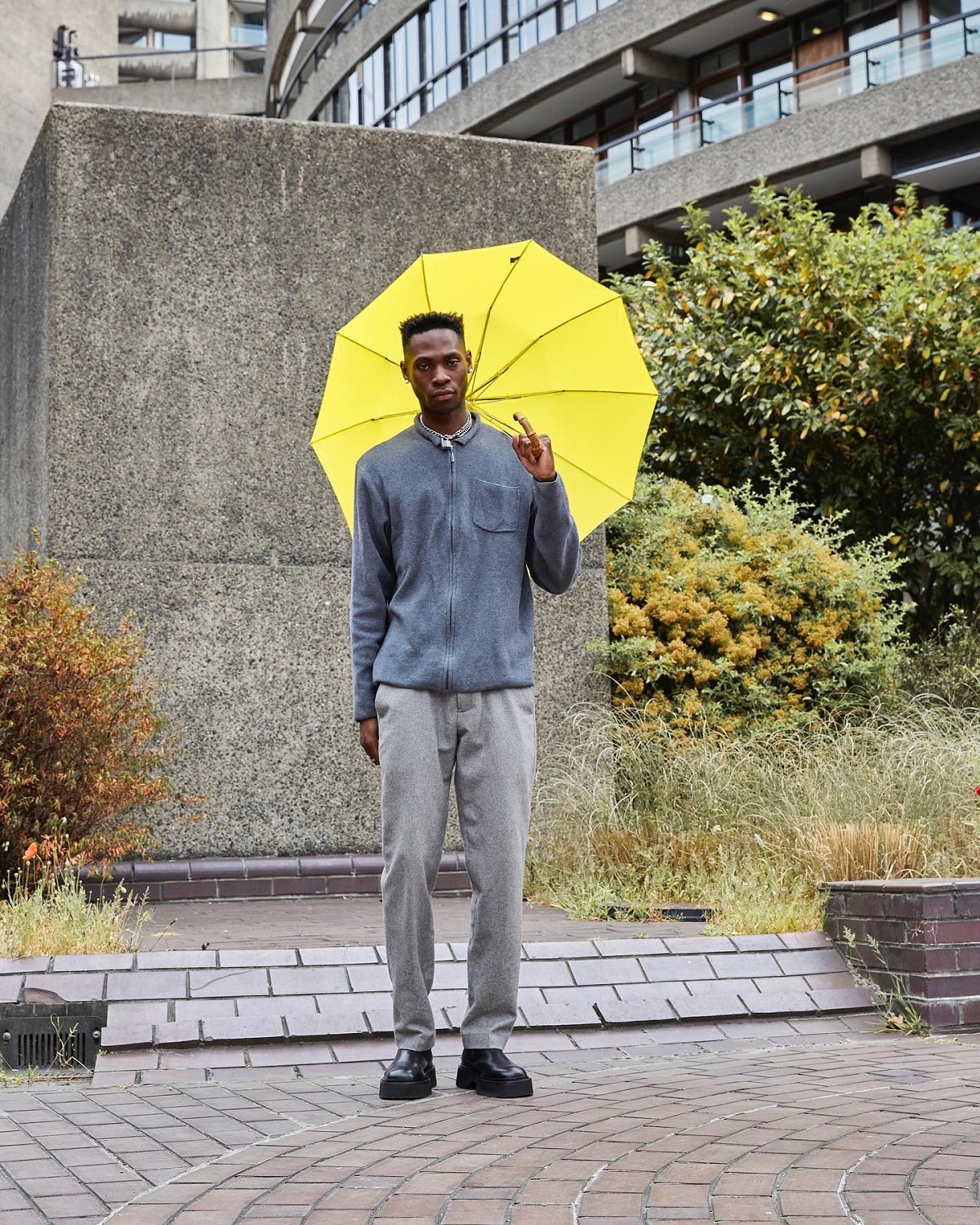 My tried and tested brolly is a classic black one with a wooden handle and it comes from M&S. I know regular readers will be tired of hearing me bang on about M&S, but the fact is I like it. It’s certainly not hip. More hip replacement, quite frankly. And that in spite of their attempted image change, courtesy of campaigns featuring David Gandy. However, I don’t care. They do a very good line in traditional, affordable items. Their classic umbrella has lasted me for years and is amazingly tough. Not once has it turned inside out in a high wind. No buffoonish Boris Jonson umbrella antics for me! 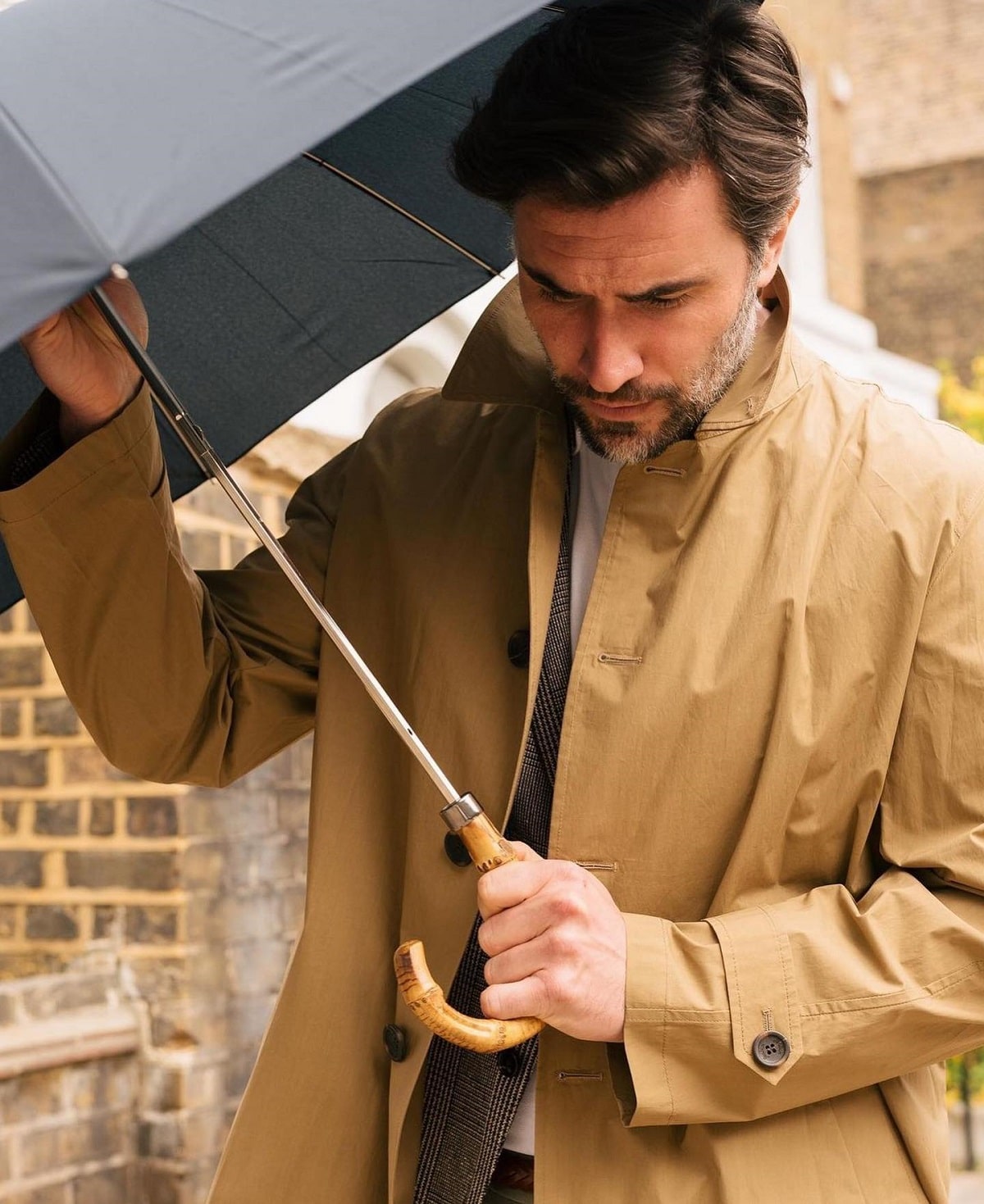 With all this being said, I will be the first to admit that it’s not the most elegant of umbrellas that money can buy. You see, this is the thing about umbrellas – if you’re something of a dandy then they make one heck of an accessory. Victorian gents could carry a cane, but it takes considerable gumption to pull that off today. An umbrella, though, works a treat. I’m actually not one for great displays of panache, but if you are up for a bit of promenading then you can really swagger about with a brolly, flicking it up in a self-important manner with every step you take. That’s for when it’s not actually raining. When it is raining, the brolly does the showing off for you with its design. 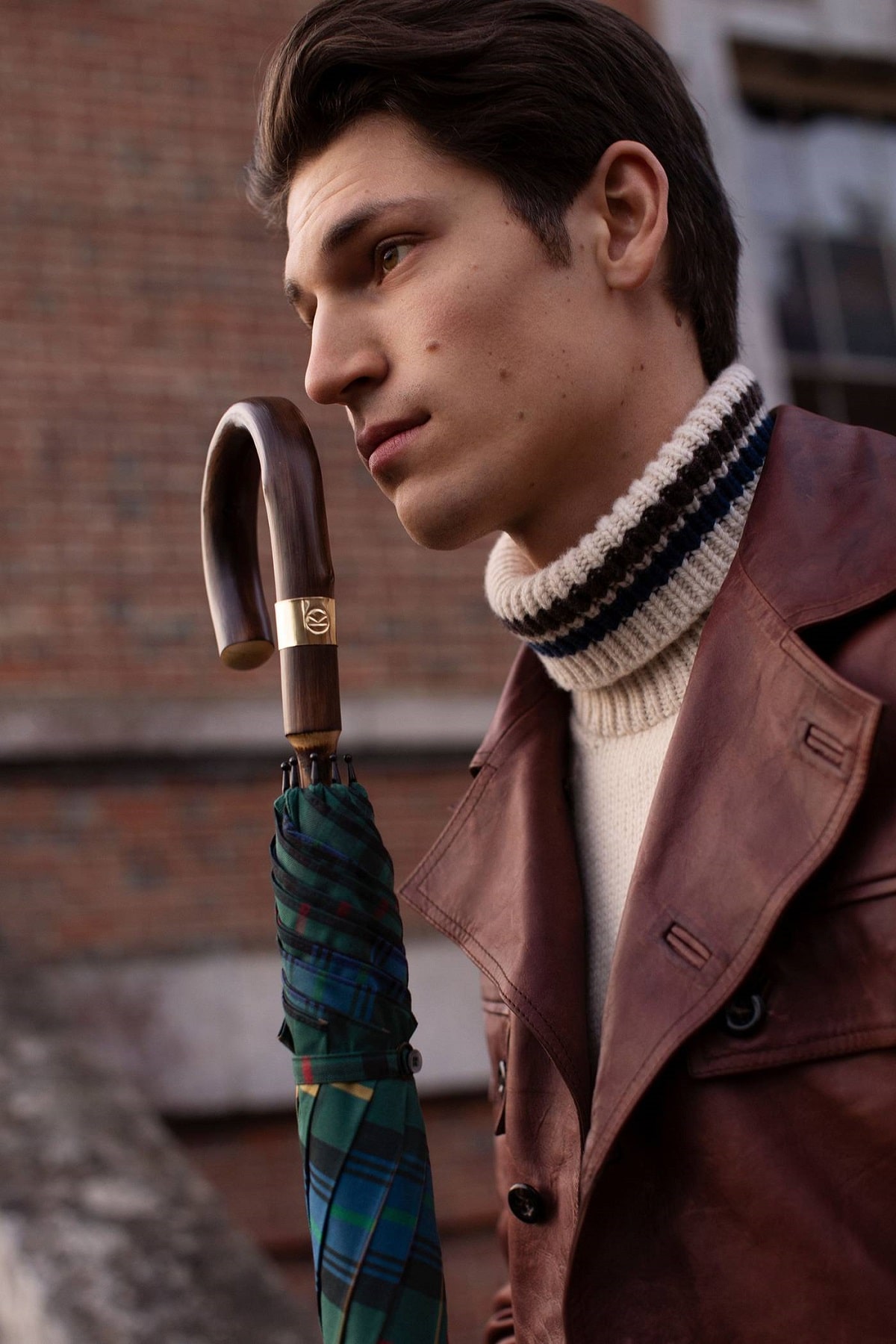 So what are the options when it comes to the design? Some, of course, like to proclaim their alma mater, their golf club or their city firm on the canopy of their umbrella. But if you really want to go for the old school gent look, then there are places that cater for such tastes. James Smith & Sons is a traditional, London-based umbrella maker that goes back to 1830. They’ll sell you an umbrella with a duck’s head carved into the handle for just shy of £300. Needless to say, the pouring rain will roll off it like water off a duck’s back! (Yes, do groan at that one if you must.) They do a jaguar and a terrier handle too. Or there’s a “solid stick umbrella” made from just one single piece of wood. It’s more solid, certainly; but more pricey too. Alternatively, if you fancy feeling all French and chic, I see that Hermès do a brolly for a mere bagatelle at £700! 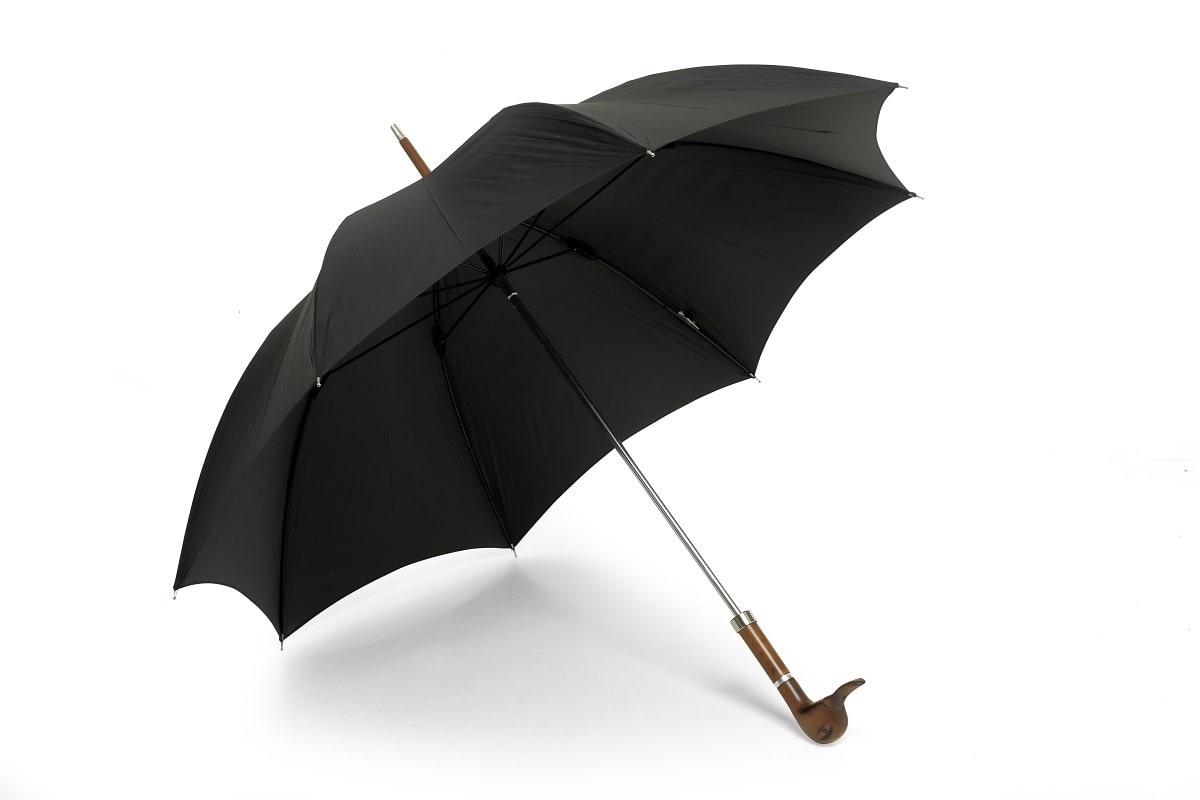 If you’re not looking to spend a fortune, though, the classic brand Fulton are more reasonably priced and really timeless. They’ve given their brollies names like Mayfair, Consul and Commissioner, so you can feel like a jolly important chap every time you use them. This is the man-about-town equivalent of feeling like a sporting legend when you wear a Converse All-Star or an Air Jordan.

Of course, though, the one thing everyone knows about umbrellas is that they’re easily forgotten. All it takes is a couple of pints to rob your brain of the wherewithal to pick up your umbrella again and bring it home with you. And even just the rush of travel will produce a mental fog that sees countless umbrellas left behind on buses and trains. By all means invest in a smart umbrella to make a splash; but do be prepared for absent-mindedness to rain on your parade!

Do you own an umbrella? #fashion