THE ORIGINS OF AVIATOR SUNGLASSES 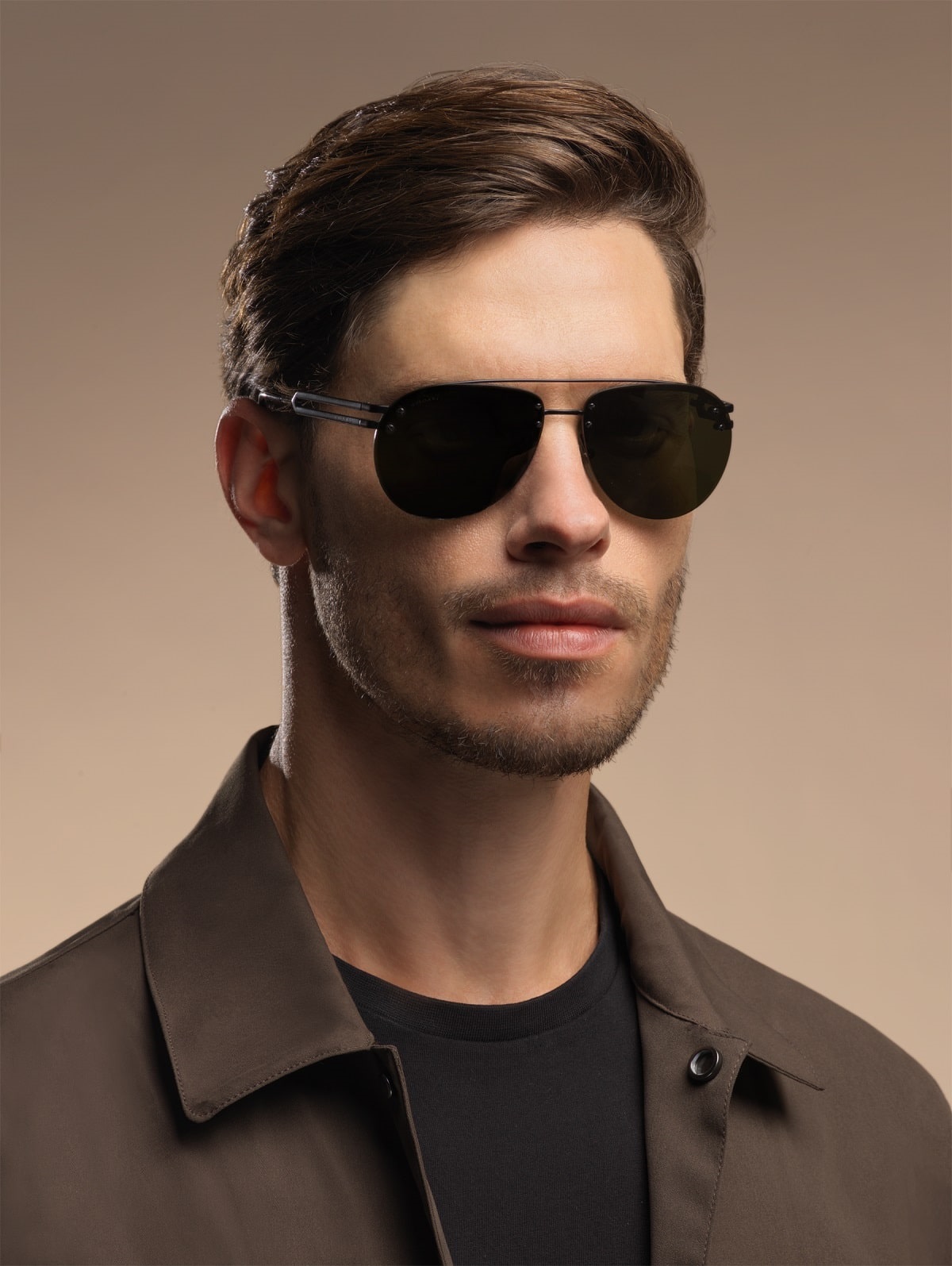 Every roundup of classic sunglasses trends tells you one thing: Invest in a pair of aviators. Like menswear trends spanning from trench coats to chinos, its origins go back to the military, developed in the early decades of the 20th century to protect pilots’ eyes against frigid temperatures in an exposed cockpit environment. Civilian use transformed them first into a technical sporty pair designed to block out the sun and reduce glare more effectively than what was available on the market at the time. And, as we’ve seen, their shape and composition evolved with style trends toward the end of the 20th century, becoming flatter, featuring gradient tints, and, into the 21st century, incorporating coloured acetate frames for variety.

Today, “aviator” describes a pair of wire-framed sunglasses with larger lenses. Most of the time, they use a teardrop configuration, but the term gets thrown about for select geometric and even heart-shaped styles. Going back to basics, aviator sunglasses distinguish themselves with dark or reflective lenses designed to fully cover the eye area and surrounding skin, including the upper part of the cheek. Originally, a convex teardrop shape that wrapped partially around did this. These were joined by G-15 tempered glass to let in no more than 15 percent of light. Thin metal frames with a double or triple bridge or bar in front supported the lenses, included a cable or bayonet-style temple, and hooked behind the ears for support. Adjustable nose pads provided a more comfortable fit. This design shielded an area two to three times the size of the wearer’s eye socket, limited peripheral sun exposure, and reduced the amount of glare – an innovative advancement at the time that has since shaped the design and features of casual and performance eyewear. In the present, the flatter form no longer provides significant side coverage. 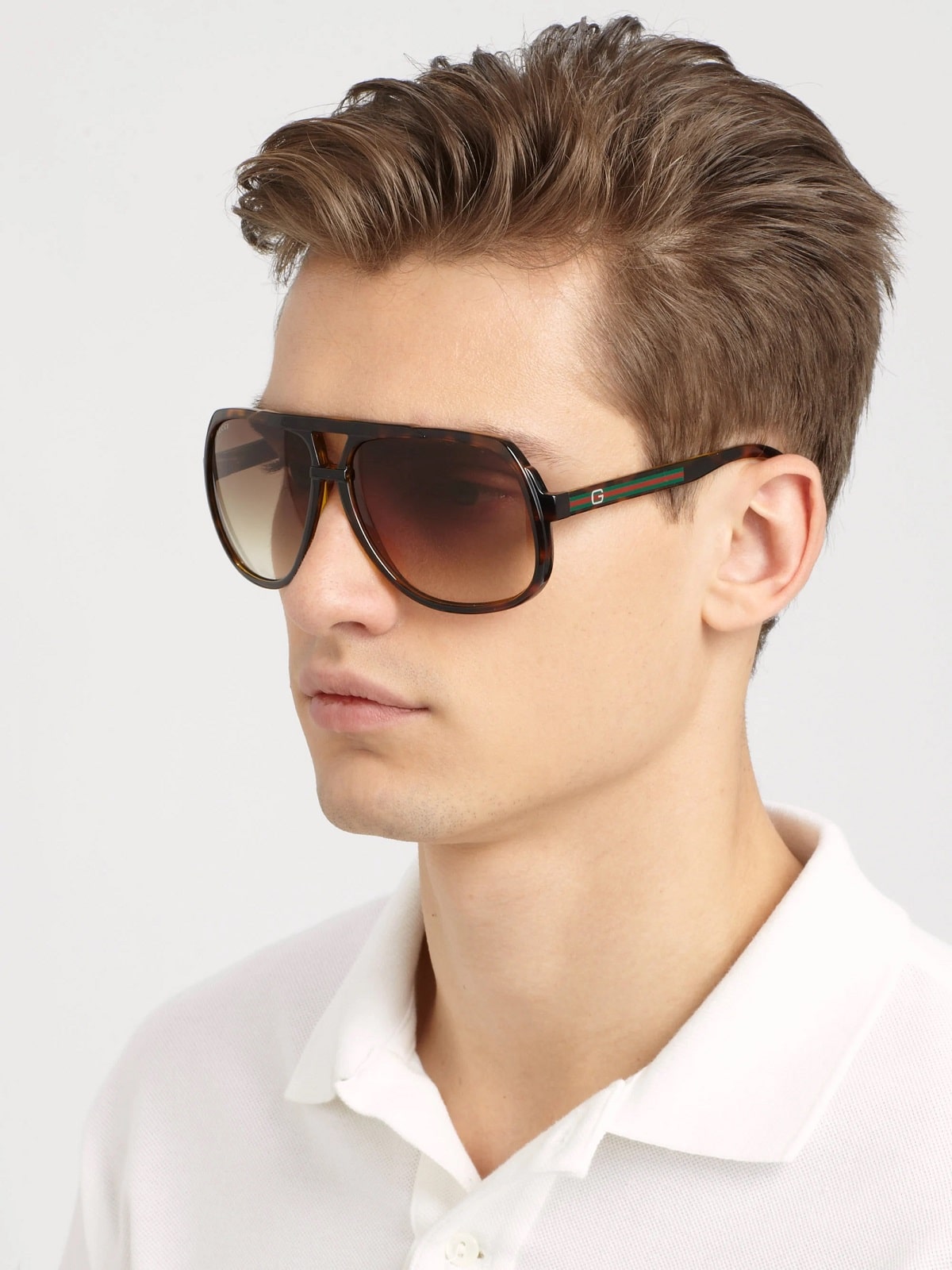 The History of Aviator Sunglasses

While the modern-day aviator is often attributed to Bausch & Lomb, sunglasses using a shield shape to protect the wearer’s eyes in cycling date back to the mid- to late-19th century. The prototype for what we now perceive as the aviator frame emerged post-World War I: Specifically, American Optical designed a pair of sunglasses known as the D-1 for the U.S. Army Air Corps. Launched in 1935, it featured rounded, mostly glass lenses with a single-piece shield-like design. Bausch & Lomb began development on a more comfortable frame for pilots in 1936 to replace the more cumbersome and easy-to-fog flight goggle. With a lighter, more streamlined form, these “pilot’s glasses,” as they were originally called, used a thin gold frame and green mineral glass designed to reduce the amount of UV and infrared rays hitting the wearer’s eyes. Development involved American fighter pilot John Macready, who witnessed a test-pilot take off his goggles past the 33,000-foot barrier. When this occurred, Macready supposedly noticed the test-pilot’s eyes had frozen over. Allegedly, he provided Bausch & Lomb with the fit, shape, and tint pilots needed to protect their eyes against the glare and temperature without fogging up or adding weight like a pair of goggles did at the time. 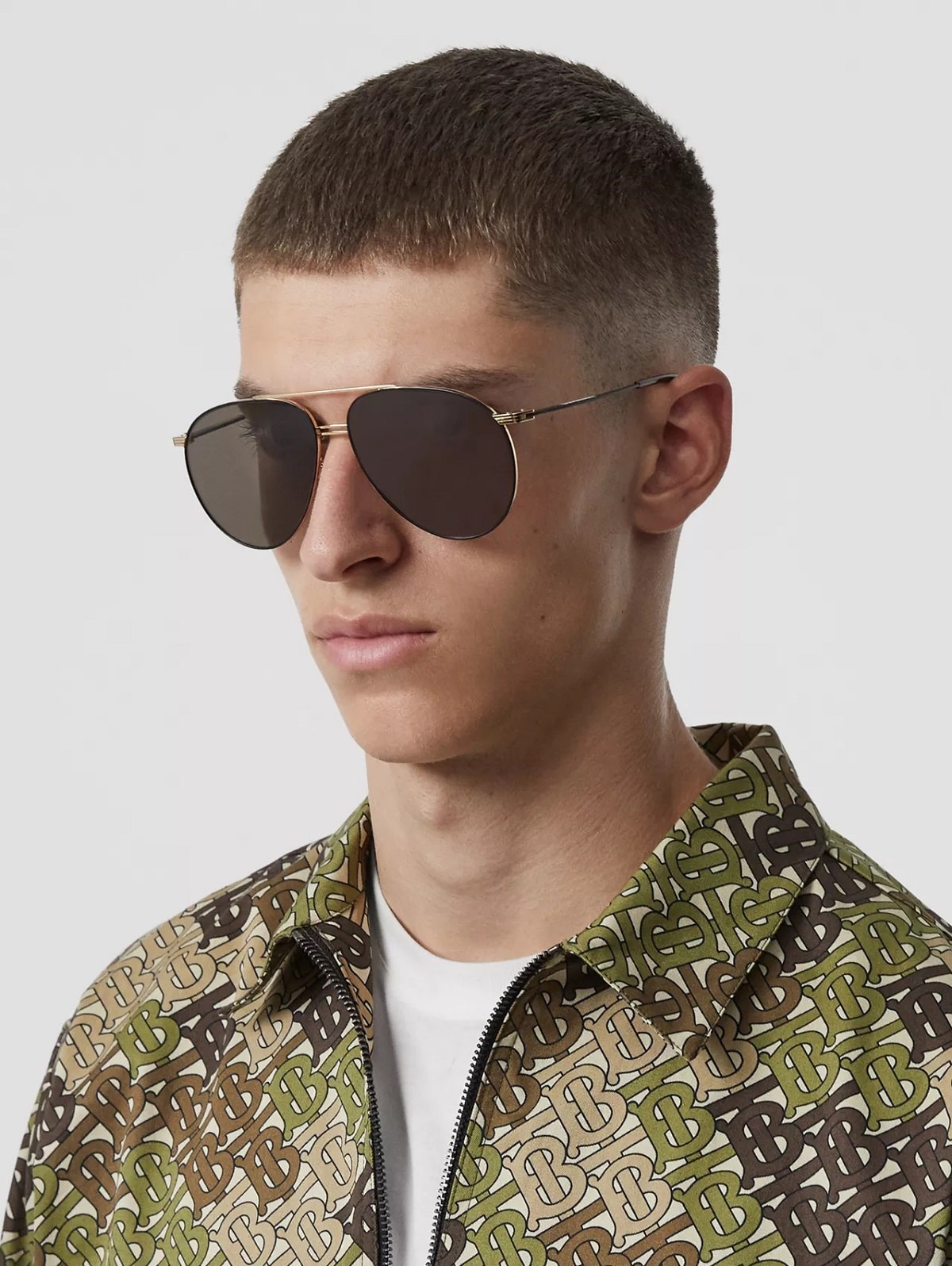 Bausch & Lomb’s design kept the concave teardrop shape, as this blocked out the sun while still allowing pilots to look down at their dashboard. This aspect was joined by the familiar brow bar and a cable-style temple for more flexibility. Bausch & Lomb assumed a contract with the U.S. Military to continue producing this frame. This design was eventually trademarked as the “Ray Ban” – later the “Ray-Ban Aviator” – and started to matriculate into civilian use through the sports eyewear market later in the 1930s. American pilots continued wearing these sunglasses into World War II – the period which saw them start to display a gradient mirror lens. This combination provided greater protection and better visibility against the sun but still allowed for a clear, unobstructed view of the plane’s instrument panel. More prominently in terms of pop culture, the burgeoning discipline of photojournalism captured General Douglas MacArthur sporting sunglasses during the U.S. campaign in the Philippines. Heading toward the end of the 20th century, Randolph Engineering was awarded a contract with the U.S. Military in 1978 to produce the HGU-4/P Aviator frame and still maintains that distinction. 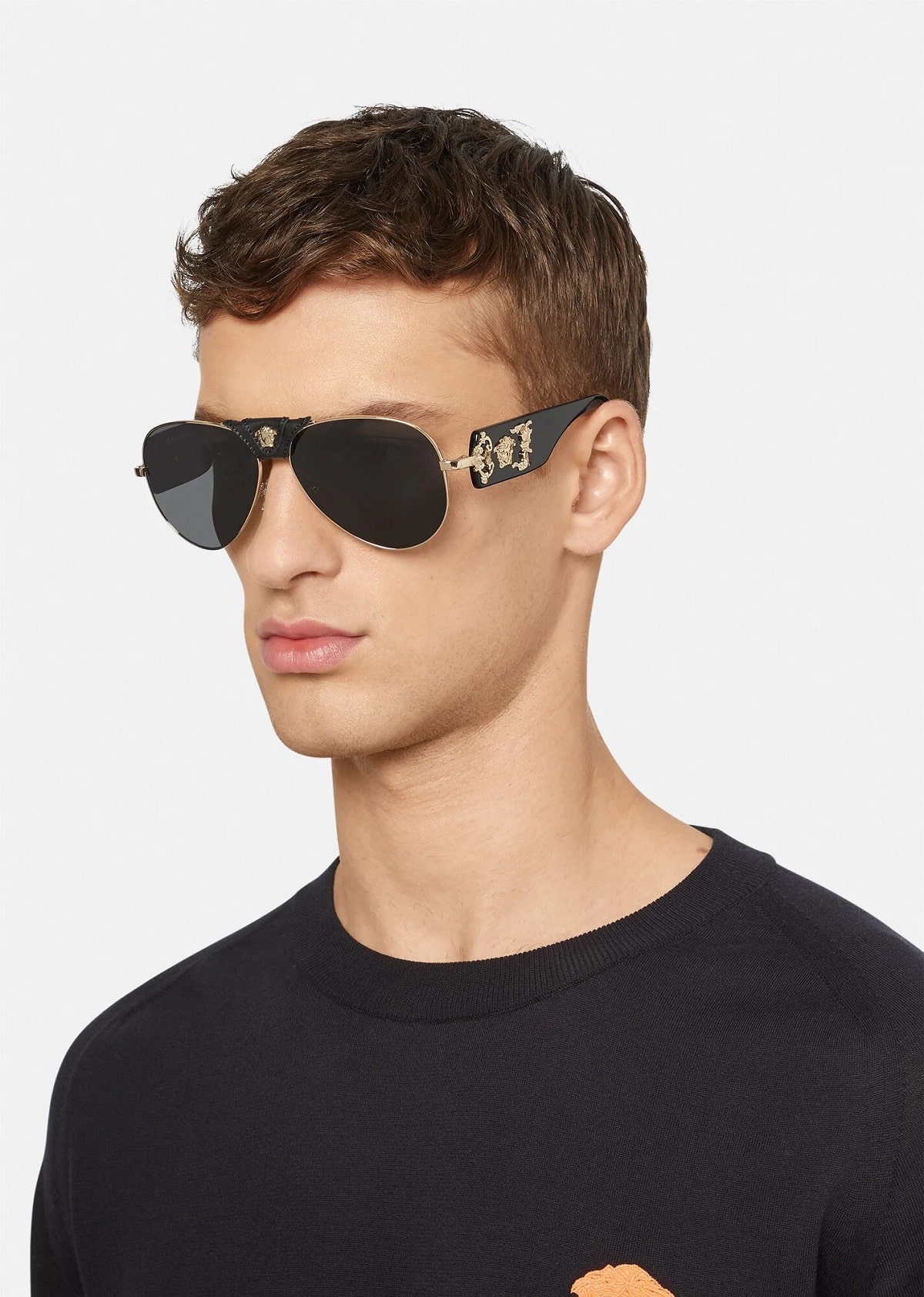 The aviator’s early UV- and glare-blocking properties made them a hit among the burgeoning sporting marketing in the U.S., appealing to fishing and hunting enthusiasts. Green lenses characterized these sunglasses, which Bausch & Lomb first made available to the public in 1937. They were re-branded under the “Ray-Ban Aviator” moniker in subsequent years. Bausch & Lomb released additional civilian-use aviators following the launch of the Ray-Ban Aviator. These included the Ray-Ban Shooter, with green or yellow Kalichrome lenses crafted to enhance details and reduce blue light. More memorably, these were the first pair to feature a “cigarette holder” – a bullet-shaped circle below the brow bar designed to hold the wearer’s cigarette and allow for use of both hands during an activity. The Shooter was followed by the Outdoorsman, a similar frame for hunting and shooting enthusiasts, and the Caravan, a square-framed style introduced toward the end of the 1950s. Pop culture helped grow the aviator’s popularity from this point on. The frame – which took on a flatter, less curved form over the next couple of decades – was spotted on starts from Marlon Brando in The Wild One to Robert De Niro in Taxi Driver and by the 1980s in Top Gun. Between these cinematic landmarks, they started to feature more colours in the 1970s, got a classic revival toward the end of the 1980s due to Bausch & Lomb’s history-referencing MacArthur collection, and occasionally included a thicker frame in the 2000s – influenced partially by Robert Downey, Jr. in Iron Man and shield shapes overtaking the 1990s’ wraparound frames. Today, especially with aviators positioned as a unisex frame, you have options. Go in a more timeless direction with a darker, green, or mirrored pair, or experiment with the spectrum of lens colours and frame materials out there.