OUR TAKE ON THE SPRING/SUMMER 2015 LC:M SHOWS IN LONDON 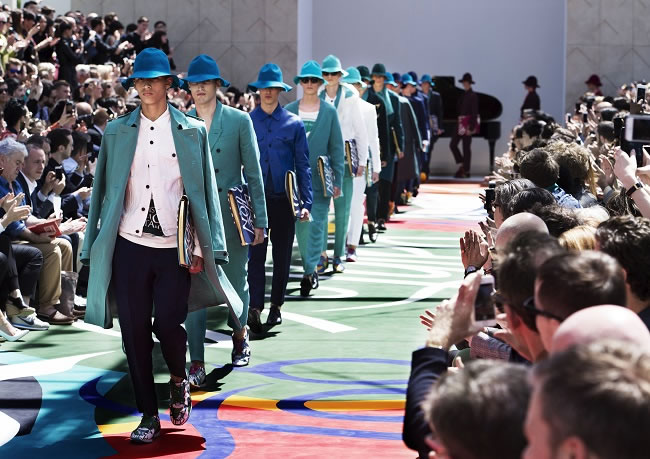 We had yet another great LC:M year and for once the weather was kind to us. There's been some impressive spring/summer 2015 collections on show and as usual we bring our readers a short review of each of the shows and presentations that we attended from the MWS writers, Craig, Rakelle, Andree, Michael, James and Jas. We’d also like to thank Sassoon for the backstage access.

Shorts, trousers and structured jackets, layered over sports tops, accompanied by rucksacks and sandals. This collection is swathed in cool tones of beige, grey and navy. Subtle ribbing on the collars and cuffs of the jackets add another dimension. Slicked back hair completes Domingo Rodriguez image of the SS15 man.

This collection takes inspiration from the 'demob' suit, given to solders upon leaving the armed forces and re-entering civilian life, and is a wash with navy blue and chalk grey pinstripes. The 'one size fits all' suits are modernised with oversized pleats and reattached shredded fabric in a death rose embroidery.

Clean lines and collarless suit jackets are the name of the game. Lightly tailored using a palette of navy, khaki and white, the Roach collection donned the runway accompanied by an energetic soundtrack. The show concluded with striking red hooded nylon jackets and flat fronted red trousers.

A highly sporty influenced range with World Cup themed oversized t-shirts in blues reds and greens to open the show. Teamed with shorts and sweat pants with Christopher Shannon logo in large fonts. Overall, a mixture of colours and youthful designs, stripes and collages bring the designs to life.

Hackett as usual choose an amazing venue, this time around it’s within the grounds of the Honourable Artillery Company. The SS15 collection pays homage to the great sporting events of the British summer calendear and puts the stylish male spectator centre stage, with looks inspired by Riviera, Polo, Henley Regatta, Boat Race and Cricket. 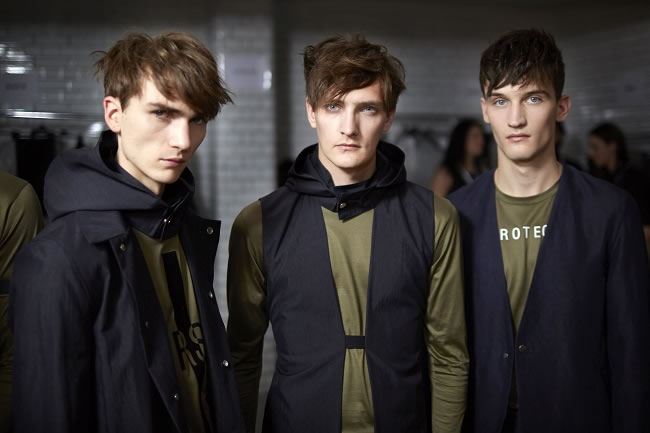 Just when we were itching to get back to the office for more footy, Oliver Spencer provde us with a dose of Rio fun with a steal band and carnival dancers. The wardrobe was made up of textured and engineered fabrics in a palette of blue, red, yellow, white, oatmeal and black.

A laid back, surfer dude vibe was a statement across the runway at the James Long show. A fresh and futuristic collection of colour, blended textures of denim, and metallic bomber jackets. Colourful sandals and leathers, it’s as if the models had stepped off a 90’s high street, this is the way sportswear is done

Set up in 2005, the MAN project by Topman and Fashion East has become a hotbed for identifying and nurturing the most exciting new names in menswear. The showcase for SS15 featured Nicomede Talavera, Liam Hodges and Bobby Abley. For his first ever catwalk, Nicomede Talavera added jade, red, dusty blue and candy pinks to a monochrome base. Pleated skirts with blocks of gingham were layered with straight trousers and accessorised with Vans and Talavera’s signature zipped socks.

Next up was Kent boy, Liam Hodges. His witty show notes had the audience chuckling before the lights had even dimmed, “Liam found shit he liked then made up a story about it so that it’d fit into his world”. Guess by that he means big baseball tees, arse-less chaps, mountain ranger hats [standout piece] and boy Scout-esque embroidery. Think big and bold.

The finale came from the slightly more established Bobby Abley whose pop-print sporty designs have already been spotted on A$AP Rocky and M.I.A. For SS15 he brought the ocean to the catwalk with a collection inspired by The Little Mermaid. His slightly sinister Ursula embroidered sweatshirt is sure to be a hit off the catwalk. Other highlights included bold flower print bomber jackets, Hawaiian print shirts and even skateboards. This is street style cool at its finest; fun and cheeky. 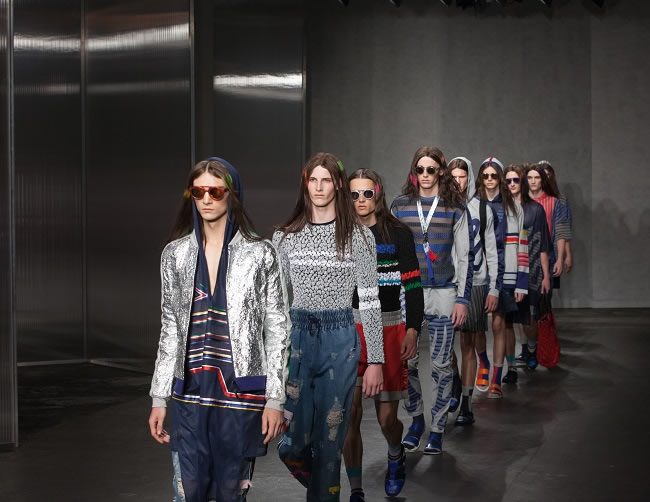 Design duo Ada Zanditon and Nik Thakkar were a talking point last season and their SS15 showcase lived up to the high expectations. They have remained true to their signature blacks on blacks on blacks look which has made them stand out from the preppy tailored aesthetic which has dominated menswear of late. The talking point however was an incredible leather biker jacket designed for the vaping-loving modern man with NJOY. The jacket features a bespoke secret pocket for storing e-cigarettes, proof that Ada + Nik is probably one of the most forwarding looking labels on the scene.

Step into the Maharishi cave where an attack is being planned. Tattooed models with kohl-rimmed eyes and covered faces added an air of menace, referencing the ongoing conflicts in the Middle East. Military nylon, repurposed into trousers and jackets, were layered with jumpers and bomber jackets emblazoned with insignia, underlining the feeling of an insurgency. 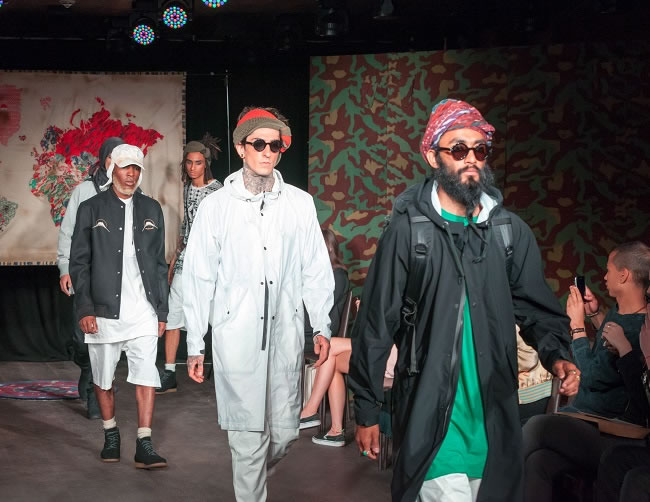 Art Intervention Subversion and Deconstruction were apt descriptions of a collection aiming to reappropriate conventional menswear into modern sportswear. Layers of pinstripes dressed down with basic t-shirts were the most literal example presented. The stand-out item was a bomber-trench hybrid [or 'Brench'] destined to be the badge of honour for quiet, sartorial rebellion.

The Scandinavian fashion brand drew inspiration from the cult film ‘The Warriors’ with a rock and roll attitude styled into its tailoring. It is a collection to be worn all hours and the colour palette focus was on black, white and grey. 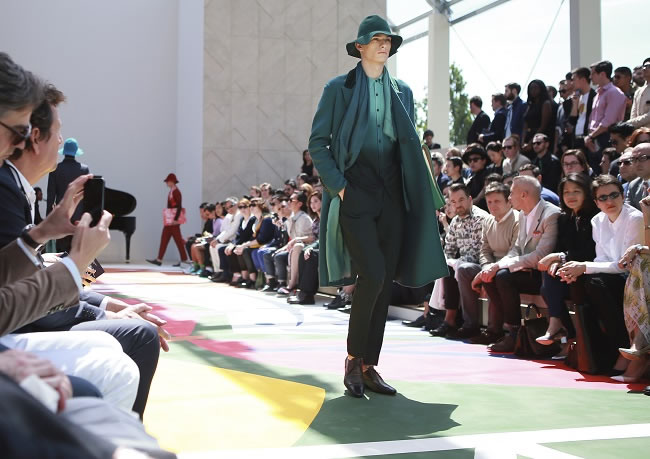 They seem to have an innate sense of how to move forward every season and hit the nail on the head every season with a collection that is completely different yet somehow still feels very ‘Agi & Sam’. From the lairy prints of 2 seasons ago, then all out monochrome for AW… now they draw upon elements of traditional Japanese attie—kimono-style necklines, unstructured smock jackets, socks with sandals, and accordion pleats. Another stellar effort from the duo, they’re not going anywhere for a long time!

They stayed true to form this season, managing to carry their typically dark jewel tones and midnight blues through to Spring/Summer without making it feel too heavy. Innovative fusion of tailoring and sportswear continues to be as ever for the dynamic duo, with use of much lighter technical fabrics. As if they weren’t busy enough, Baartmans & Siegel also collaborated with the BFC and River Island on a short film which premiered the night previous, debuting their new capsule collection with the high street brand.

She took her usual approach of taking a theme and really going all out. A ticket with ‘Dallas Rodeo’ written on it was the first clue; you guessed it: cowboys. Flared denims, 70s inspired super slim rollnecks and psychedelic print made for a novel, yet not necessarily a likeable collection. The fringe suede jackets and voluminous scarves were saviours of the collection, not to mention the weird cosmic space cowgirls (not sure that’s a thing). 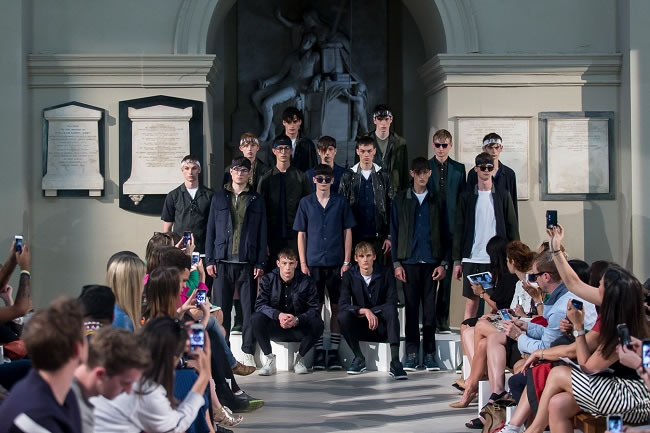 Set in the opulent Rosewood Hotel, Duchamp showed us what Dandy styling is all about. Models mingled with the crowd donning silk paisley print dinner jackets, sharp tailored 3 piece suits [included double breasted waistcoats] and tasselled loafers. The doubling up of a tile print silk blazer with a chevron print shirt sounds like a complete disaster on paper, but actually it was one of the strongest looks on show.

We were back at the Rosewood Hotel for Lutwyche's presentation. Their CEO, Tony Lutwyche, talked to MWS about how they applied nano technology to waterproof their bright yellow silk trench coat in a bit to merge practicality with sharp design. The brand is currently enjoying great success stateside and takes immense pride in being manufactured completely in the UK using UK fabrics.

On 11 Savile Row we celebrated Hollywood legend Gregory Peck and his style archive. Whilst sipping champagne we admired the cutting patterns hanging from the ceiling to create an incredible piece of art. Tweed jackets, plaid suits and impeccable tailoring reminded us that this establishment is quintessentially British. 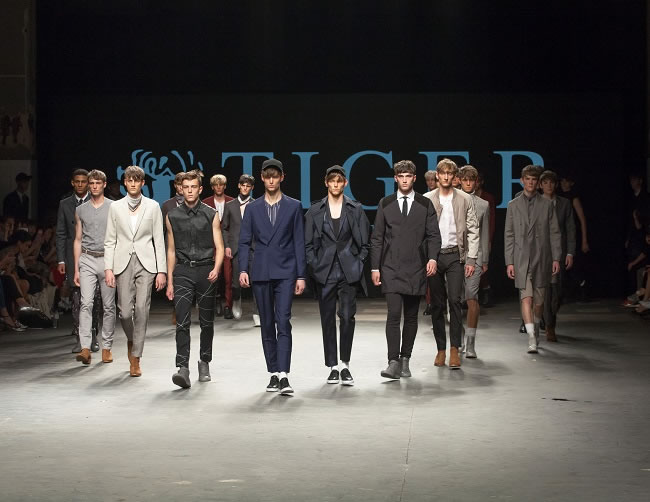 We were lucky enough to head backstage for this show courtesy of Sassoon. Lead hair stylist Bruce Masfield explained the look to us, “this season at Xander Zhou the hair combined distorted textures and irregular silhouettes to give a modern, lived-in and playful feel to handsome grooming." The show itself comprised relaxed easy tailoring that had a real 90s vibe about it. Oversized coats fastened with string, sliders worn with socks and ripped trousers dominated.

On the other side of town we were ushered upstairs to Tom Ford's private London design studio for an intimate talk through his SS15 collection by the man himself. Tom came out wearing blacking jeans, a belted safari jacket paired with an open collar shirt and monochrome neck scarf, seeing him not sporting a suit told us that this collection was going to be very different to previous seasons. Look out for a full feature on the soon! 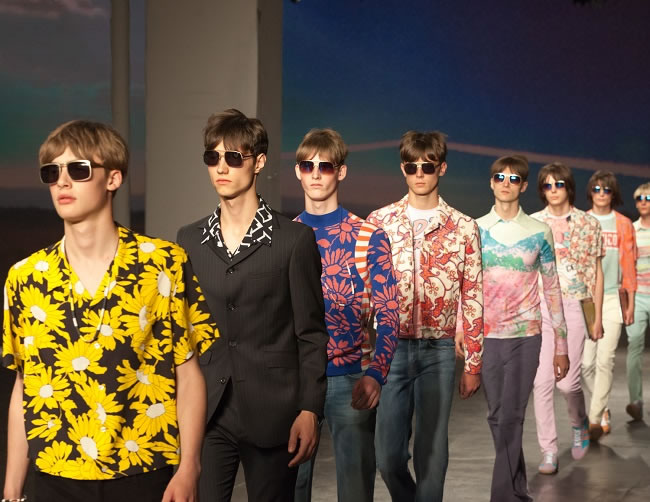 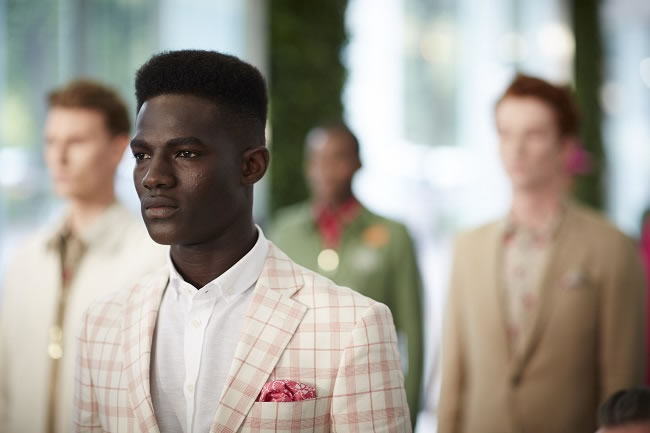 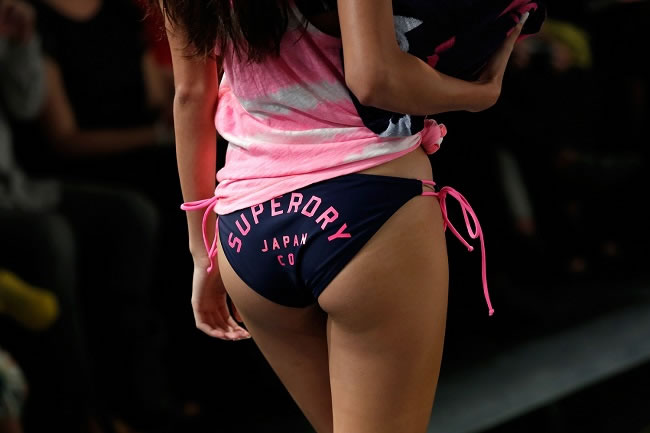