JOHNNIE WALKER BLUE LABEL, A SPECIAL EDITION AND TRIBUTE TO THE RYDER CUP 2014 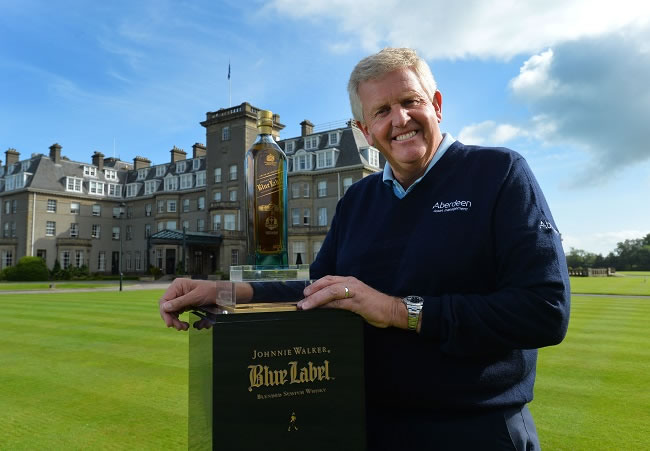 Are there any other institutions that can claim to have a more historic and iconic status of Scottish roots than golf and whiskey? I don’t think so. In September 2014 these two global sporting and celebrated industries couldn’t be more intertwined.

For it is this year that, “The Striding Man” the legendary symbol that is Johnnie Walker whiskey, who have launched a limited edition Blue Label to mark the coming home of the Ryder cup 2014 to Scotland, and to the world renowned PGA Centenary course at Gleneagles!

MWS took a trip north for a pre tournament experience of the senses. Welcome to Scotland, welcome home Ryder Cup. A drive north of Glasgow via the historic sights of Bannockburn and Stirling provides a sense of anticipation for the beautiful serenity of the glen. Proudly nestled in the area of Auchterarder sits the majestic Gleneagles Hotel and golf resort, which has recently been voted by the Daily Telegraph ULTRA travel awards the accolade of “The Best Golf Resort in the World 2014.”

"When arriving at the hotel and absorbing the 90 year history with its three pristine courses and breathtaking views, you can comprehend why"

Johnnie Walker Whiskey and their various coloured labels, especially the black label, are recognised and admired all over the world. Its great association with golf can stretch back to 1926 with the “hole in one” award, which provided a free bottle of red label to the victor.

Perhaps more significantly still is the embarking of Johnnie Walker becoming a golf sponsor in 1989 and creating the event known as the Johnnie Walker Classic. Now back in 2014, the limited edition run of 2350 bottles of Johnnie Walker Blue label Ryder Cup have some shoes, or should I say mouths to fill.

Before the tasting experience, we were treated to a round of golf on that legendary Centenary course, a great way to work up an appetite and indeed thirst. To top off the day, golfing legend Colin Montgomerie was there for tips and who also joined us on the 18th hole. It should be noted that true Scottish weather played a part in the day, and lets say continued to bless the ground, and our coats, trousers and socks, all soaked through.

Nevertheless we continued the round, with a smile. After-all, how often do you get to play at a course like this, especially when it is almost 100% prepared for the Ryder Cup in only 3 months time. 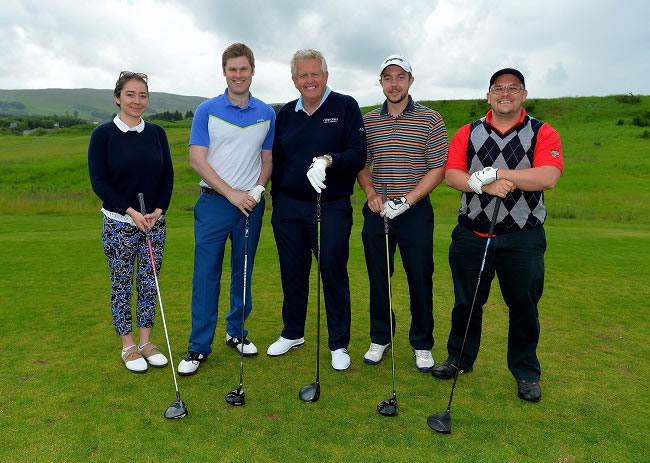 "Colin Montgomerie joined us on the 18th hole"

Showered, dried and warmed up we were treated to the Johnnie Walker Blue label tasting. I am no whiskey connoisseur but that only added to the strength of the blend. Ice water in one hand to cleanse the palate ready for the Blue Label. Here is a great deep, rich Scotch with subtle smokiness and yet smooth and refreshing to the taste.

Every sip added subtle flavours including nuts and spice. The Ryder cup limited bottle is one a connoisseur can greatly appreciate as well as someone wanting an enriching relaxing drink, perhaps even after a special round of golf.

MWS caught up with the Johnnie Walker brand Ambassador Colin Montgomerie to talk about Whiskey, Ryder Cup golf and Scotland.

What is it about Scotland, the home Country that gets under the skin and ranks up there as the best Country in the World for golf?

“We are known as the home of golf. If we had a national sport, you would have to say Golf is our national sport! There's not many countries where you could say that. In fact, are we the only one worldwide? We are very fortunate especially for a small country.”

The Ryder Cup is back in Scotland for 2014 at the stunning Gleneagles Centenary course. How do you rate the European team to win this year against the American muscle?

“We will stand up toe-to-toe, as we do. It is one of the great sporting events. Any time you say that, you feel good about yourself. If you beat America at any sporting event, it is huge, massive! We will be ready for the battle, and prepared. We have a good captain in Paul McGinley, and a great team to back him up. So all is looking good.” 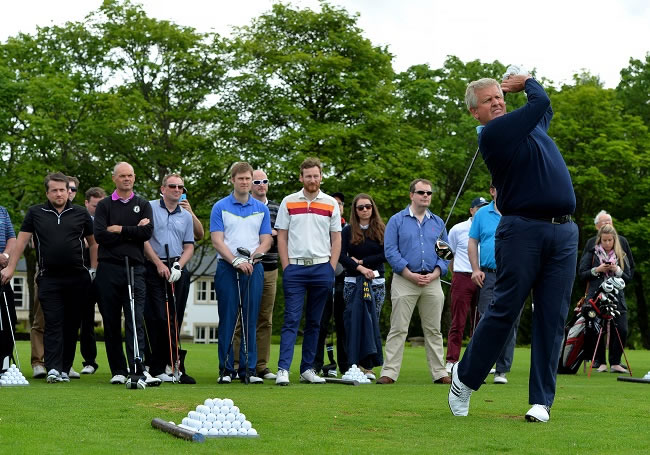 Who are the stars, the stand out players on both sides for this year in your opinion?

“Tiger Woods should be fit by then, and I’m sure he will be playing, and I do hope he is. Of all the players you think about in America, he is the stand out man in golf. He is the biggest box office that we have, so he is number one. So more people will be watching his game than anyone else. We have our number one really, although not ranked in that situation right now as we speak, is Rory McIlroy, who is the next best think to him. He would be closely followed by the likes of Henrik Stenson, Justin Rose, Graeme McDowell and Paul Casy - these are the guys that are right on Rory’s heels and we have a great set.”

You have had wonderful Success in this great tournament, including winning captain in 2010. What did that experience teach you as a mentor and captain?

“It was a different situation. I went to Wales without my golf clubs. A very different feel, to go there and to win with six rookies, we had never won with six rookies before. So that was good in a way and proved that it can be done. Home advantage was massive, which it will be again here for the European team. I took away the fact and feeling that after loosing it, to regain it was a fabulous feat because America were going there to defend it. It was extremely close in the end.” 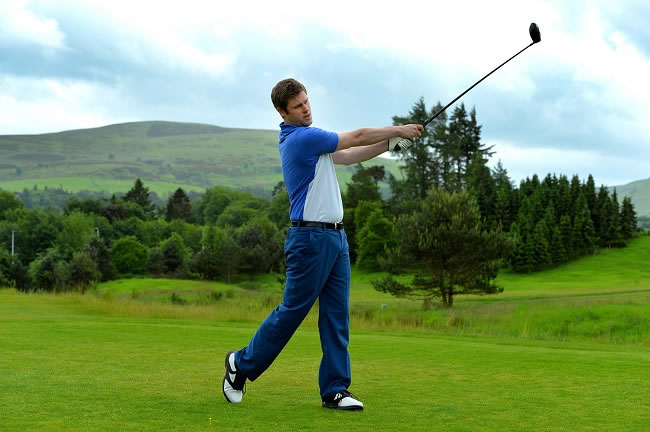 What advice would you offer to new comers to the game of all ages?

“The basic thing you would say to someone coming into the game is that, firstly, I know it is not easy because you can get frustrated, it can be a frustrating game. However enjoyment. Usually if you enjoy something, you are good at it, so enjoy it. Really take it all in, and these marvellous courses. We have one of these games that, we can’t play at Wimbledon, We can’t play at Wembley, we can’t play at Twickenham, but we can play on a Ryder Cup course just before an event. Or the day after the event, with the same pin positions. You can’t turn up at Wimbledon on the Monday afterwards and have a game of tennis, but you can do that here at Gleneagles. It’s amazing, so embrace it.”

Johnnie Walker have launched their new Blue Label Ryder Cup special edition whiskey coinciding as main Ryder Cup 2014 sponsor. What are your thoughts on the whiskey heritage here in Scotland, and this new Blue label?

“They gel so well together, two five star brands, golf and whiskey. They're the home of Whiskey and the home of golf. Especially here at Gleneagles, which is seen as one of the great resorts in the world, happens to have the mother company, Johnnie Walker here. This new Blue label and to have bottle number one, with Gleneagles emblem and Ryder Cup on it, is very special. Personally if I was to have a whiskey, It is almost generic to say, ok Black label, you know exactly what you are after anywhere in the world. However Blue Label limited edition is better, I must admit there is a taste difference to it, and being served a Blue, I would take it.” 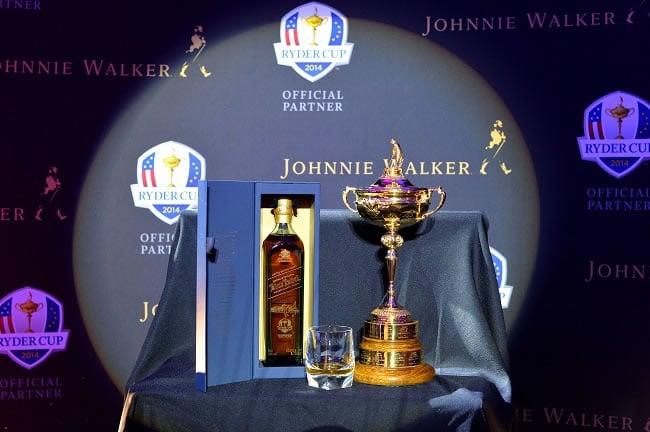