“I'D DESCRIBE MY STYLE AS THE COMPLETE OPPOSITE OF KANYE WEST AND NOT QUITE NICK CAVE.” 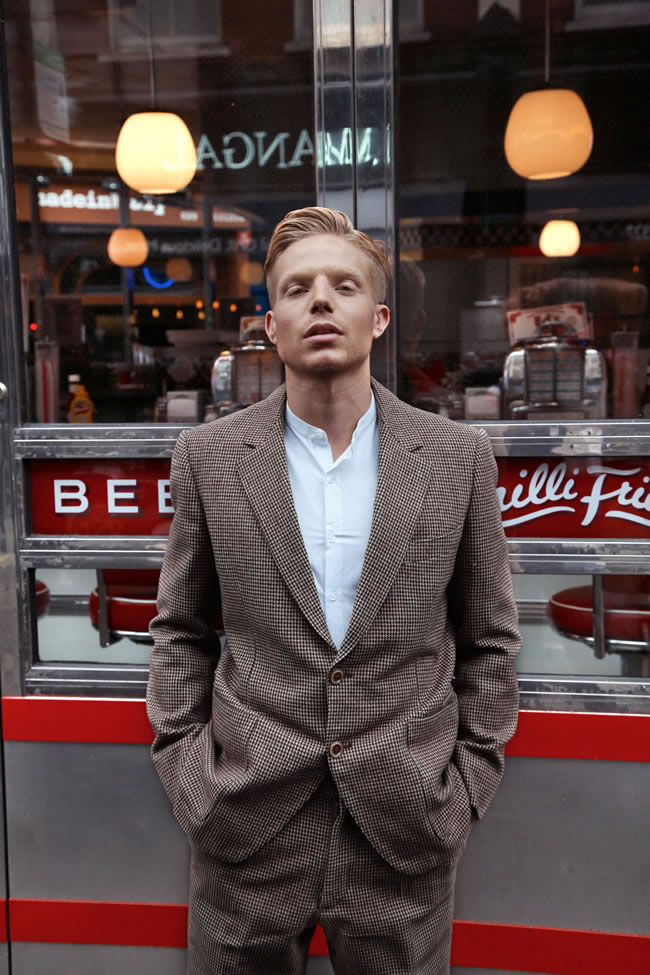 Being described as a "legend" should never be taken lightly. Whether it be an actor, musician or designer, past or present, the title is generally only given to people who truly deserve it. It may be given for reasons of a huge achievement, a personal breakthrough or just maintaining a certain reputation. 'Legend', the most recent thrilling offering from director Brian Helgeland, is an adaptation of the lives of the notorious Kray twins. Alongside Hollywood actor Tom Hardy, rising star Charley Rothwell Palmer portrays the role of Leslie Holt, a croupier who supposedly had a relationship with Ronnie Kray and was known for introducing them to Aristocracy. The film's key focus is the relationship between the two brothers and is packed full of violence, menace and 1960s suits.

MWS style caught up with this young new actor to talk about his challenging role, his life an as actor on the big screen and who he identifies as a 'legend'. The future looks very exciting for Charley as one of his next upcoming projects involves none other than action film legend, Arnold Swarzenegger! This stylish actor is definitely one worth keeping an eye on. 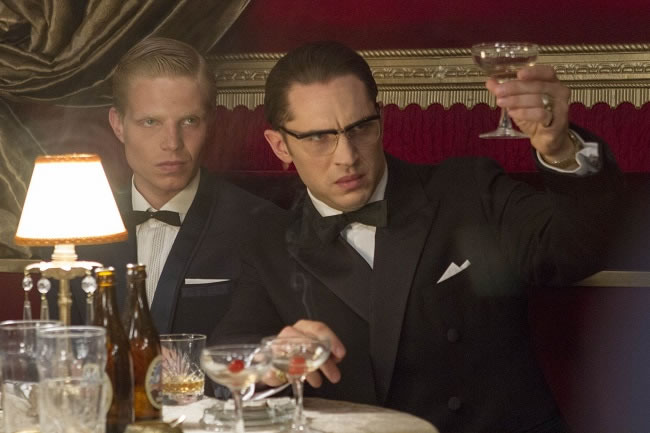 Your most recent work has seen you playing opposite Tom Hardy in Legend. How did you prepare yourself for this role after finding out you had the part?

“Well knowing I was going to be working with the cream of the crop made my preparation slightly more precise. I had a lucky advantage early on in that my family knew my character, Leslie Holt, when he was alive. I collated stories, looked into his family; clothing, physical attributes he had and then tried to bring him back to life. It was exciting playing a real person. I felt I had to do him justice for those who really knew him.”

How have you found it transitioning from the small screen into the big screen? Do you have a preference?

“I feel like if your preparation matches your desire then it’s all the same. I just want to work with people I look up to, for me that is the most exciting prospect of progressing as an artist. Both the ‘small’ screen and the ‘big’ screen give you different joys. I guess on bigger budget projects things may run smoothly but you don’t always get the same togetherness that you can get on something smaller. But if I’m honest it doesn’t really matter the size of the operation, it’s who’s involved that makes it work.”

Is the history behind the Krays something you were previously interested in before the film?

“Not in the same way that some people maybe are. I am definitely interested in violent men. There is something very primal and natural about the fascination with trying to get the upper hand over another or even enjoying pain. I had read the John Pearson book, ‘The profession of violence’ which, of course, the film is based on and it’s a great insight into why the Krays are so notorious. I personally think it’s hard to separate truth and myth with certain memoirs, but of course these myths make for a great movie.” 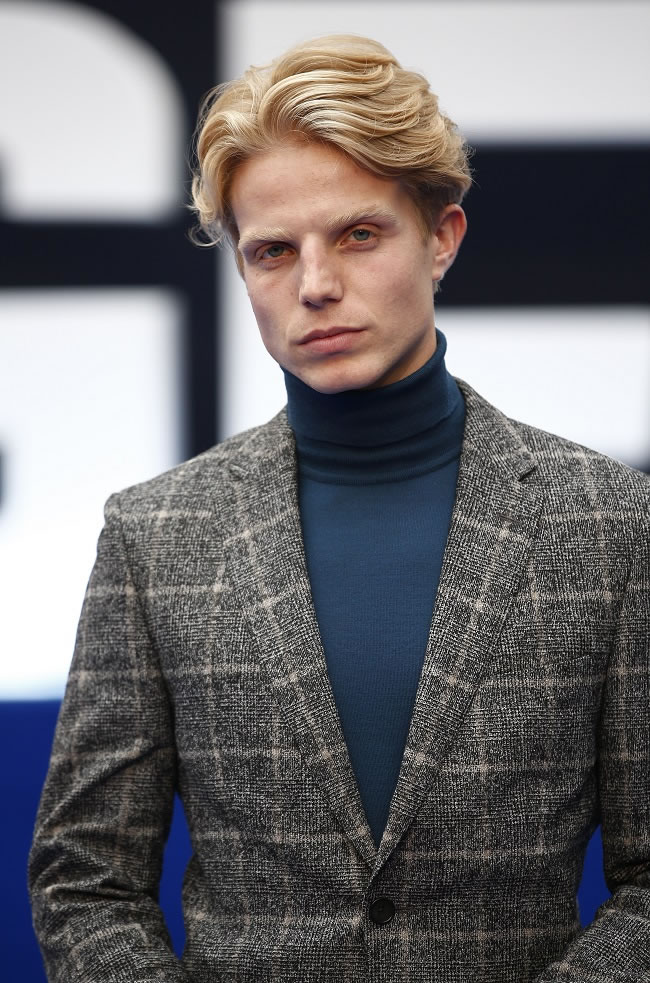 What was the biggest challenge you faced in this role?

“Leslie Holt was a bi-sexual man. But in those days it was obviously more than frowned upon, in some people’s eyes it was still illegal. But to add to this Leslie was, I felt, bi-sexual not out of preference but purely to further himself in life. He wanted to be king of the castle and if it meant taking a spanking off of the then king (Ronnie) then that was fine. ‘Needs must’ as they say. Trying to portray a gay man who wasn’t necessarily gay was testing. Hopefully I pulled it off.”

How would you define a 'legend'? In your eyes, whom would you identify as a 'legend' in the film industry?

“I guess a legend would have to be over a certain age or have a certain catalogue of work. Leonardo DiCaprio has played many fantastic roles from as early as the Gilbert Grape days. Actress wise, Marion Cottilard is my favourite actress but maybe not quite a legend yet. As a writer, Brian Helgeland who wrote and directed me in ‘Legend’ is himself, one of the greatest. Directors; Finchner, Scorcese, Fellini, Lynch and one of my recent favourites Wes Anderson who I desperately want to work with.” 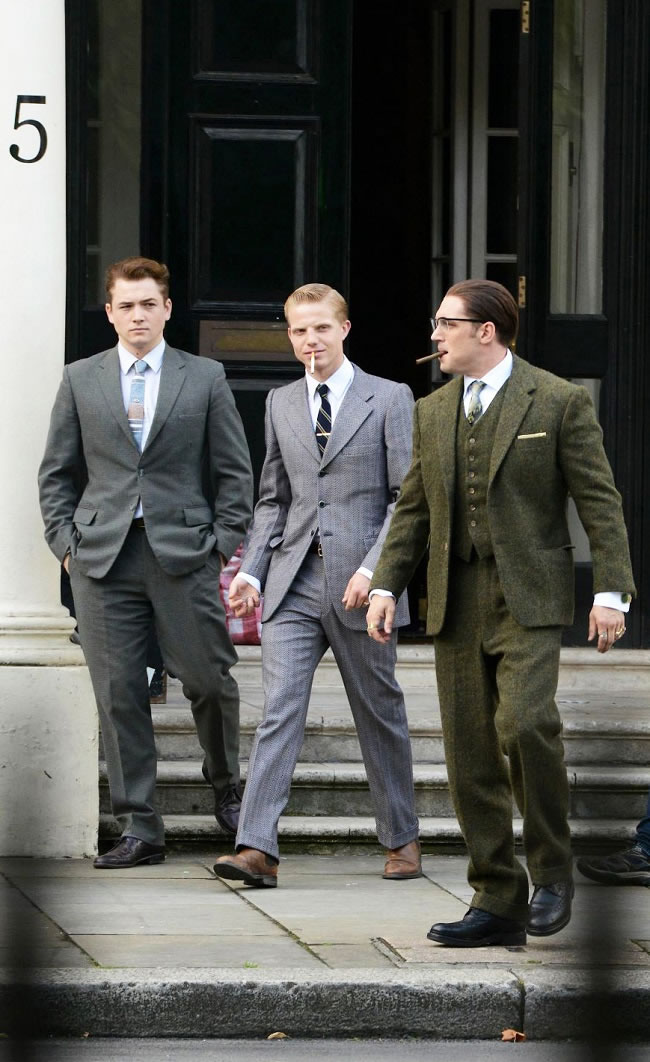 You recently stated in an interview that Charlie Chaplin is one of your idols. Do you look to his method of acting for inspiration? Is there anyone else who inspires you in the current day film industry?

“He is an idol for me as an auteur. Nobody was making films of his calibre, acting to his level of precision, scoring there own music for their films and even applying their own make up in those days and not many since. As an actor I can take certain aspects of him but that style of acting was specific to his era. If I’m honest I am in many ways the complete antithesis of his approach on the surface. Actors around now; Gary Oldman, De Niro, Jack Nicholson, Mattias Shoenarts, Tom Hardy, Edward Norton, Marion Cottilard, Mark Rylance, Jennifer Lawrence, Natalie Portman, Ben Kingsley, Michael Fassbender and many, many more.”

You are due to feature in a documentary with Arnold Schwarzenegger, can you tell us anymore about this? What is like working with such a legendary actor?

“It’s a documentary that will cover the world of action heroes/superheroes in movies, from the days of early cinema, beginning with the likes of Douglas Fairbanks, Errol Flynn, right through to Superman Christopher Reeve, Arnold Schwarzenegger‘s era to the present day including people like Henry Cavill, Ben Affleck, Will Smith, and the actors in X Men. I won’t say too much about the documentary just yet but take someone like Fairbanks himself, he achieved some incredible feats in his time. I got involved and was approached as a result of my role in “Legend” through US Documentary Maker Mimi Freedman, who directed the Emmy-Nominated Steve McQueen – Essence of Cool and Brando.” 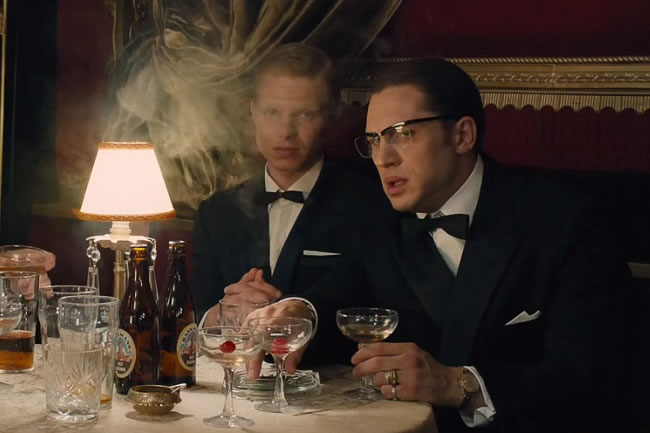 As a young rising star in the film industry, do you find time to do things a normal 23 year old would be doing in the city?

“Luckily I have quite a malleable face so although people recognise me from time to time they never know what from. Everyone just says I’ve got ‘one of those’ faces, which suits me perfectly. So in answer to your question, yes I still do what I do. Not to sure If what I do is normal though.”

What do you like to do on your days off?

“People watch, write, go and see as much music as possible, spend time with my gracious Nan. I also love getting out of London whenever there’s a chance; it seems to instantly slow my breathing down to human speed and clears my thoughts.”

In Legend there are some pretty dapper suits worn throughout the film. Would you consider yourself fashion conscious?

“If I said no then I would be lying. I definitely have a slight obsession with coats and jackets.”

Who are you favourite designers/brands at the moment?

“I’d say I’m more into shops than specific brands. I went into a shop called ‘Present’ in Shoreditch recently and it has some beautiful pieces. They had a lovely brand I hadn’t heard of called William Fox, they had some of the most vibrant colourways I’ve seen in a long time. I do love a Hardy Amies suit. Oliver spencer also has some lovely bits as of late as do Hugo Boss.” 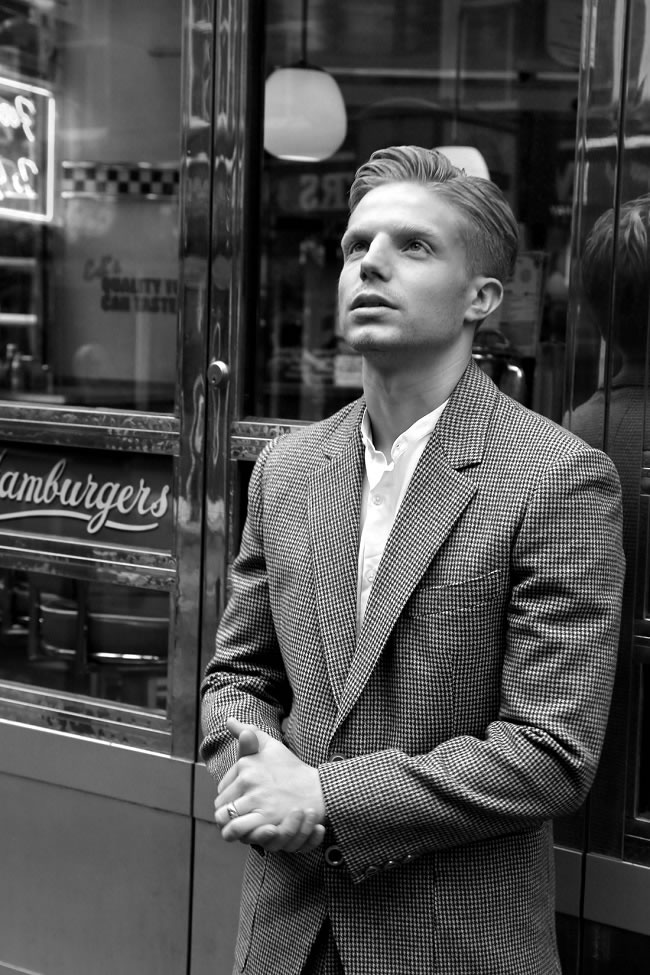 How would you describe your personal style on a daily basis?

“The complete opposite of Kanye West. Not quite Nick Cave.”

Acting obviously runs in the family, when did you realise you wanted to make a break into the industry for yourself?

“I watched a series called ‘The Take’ and in particular Tom Hardy’s character ‘Freddie Jackson’ and thought “I can do that” and from there I applied to the Brit School. Although I had little confidence at that point, deep down I didn’t see any other choice.”

What is it that you enjoy most about acting? Is it being given the opportunity to immerse yourself into a character or facing the different challenges of a role?

“Both. If I’m scared or think I can’t play a certain part then that’s a good sign. The constant fear of failure is what drives me to be the best I can. But obviously I need the opportunity to be given the parts and in turn the fear, which is the hardest part. You can do an audition, know it went well and never hear another word; it’s a long life of rejection. But I love it.”