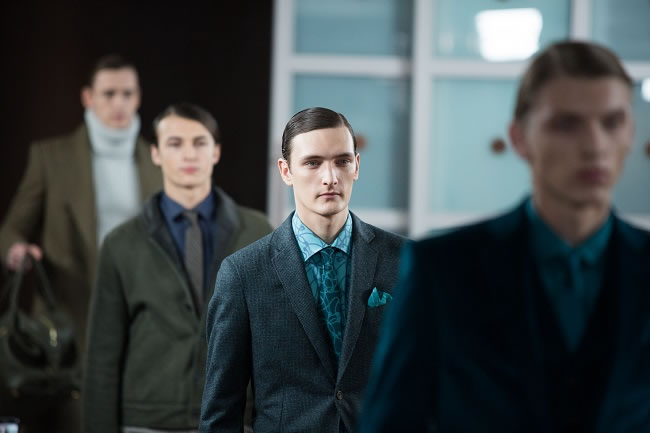 After another exhausting but wonderful men’s London fashion week which put the spotlight on forthcoming autumn/winter 2016 collections, our Editor-at-large Bec Loades and Fashion Editor Andree Latibeaudiere bring you a roundup of the best moments. We'd like to give a special thanks to Sassoon and Fudge Hair for the backstage access.

Topman continued its love affair with the seventies, but opted to reference the exaggerated opulence of the era through crushed velvets, rich brocade and signature flared trousers. The clothing incorporated belted waists and distressed details with plays on texture bleached denim, moth-eaten wools and topped off with oversized sloping beanies. 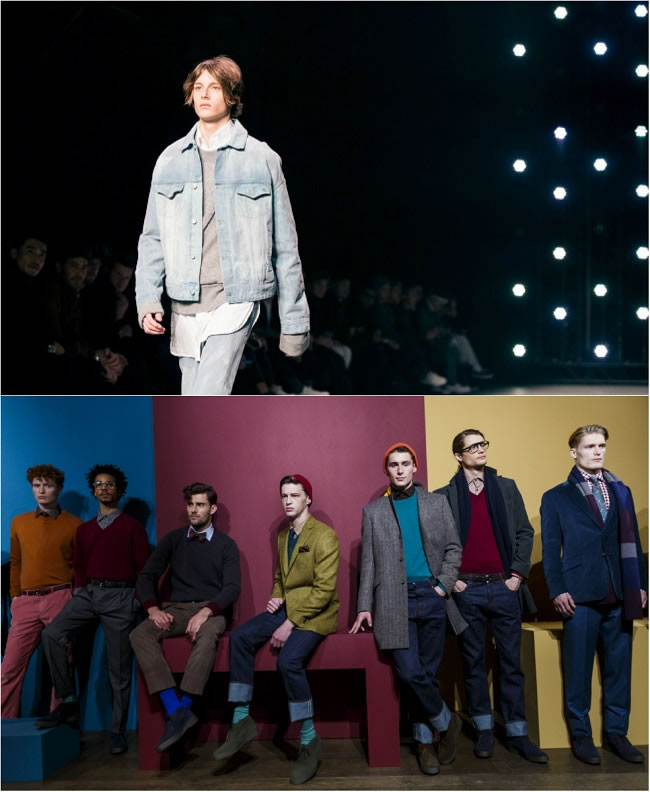 For AW16, Belstaff sought to capture the adventurer's spirit, creating clothing to anticipate the demands of harsh terrains and weather conditions, whilst retaining the signature features and wearability of the brand. Shearling, wool and fur were contrasted against innovative nylons and leather in modern designs to give the pieces practicality in harsh terrains. Belstaff also launched their first accessories collection for AW16, including utilitarian backpacks and duffels.

Raeburn's dedication to the spirit of exploration continued for AW16, but conditions were far from extreme this time round. This collection seemed much more suitable for everyday adventures rather than physically demanding ones. Following in the footsteps of the rabbit and shark, the snow leopard was the latest animal to get Raeburn reimagining, turning up on jumpers and shirts to add a lighthearted feel. Shades of deep red, grey and olive came through in outerwear and accessories, including trailing chunky scarves, long knitted cardigans and signature backpacks. 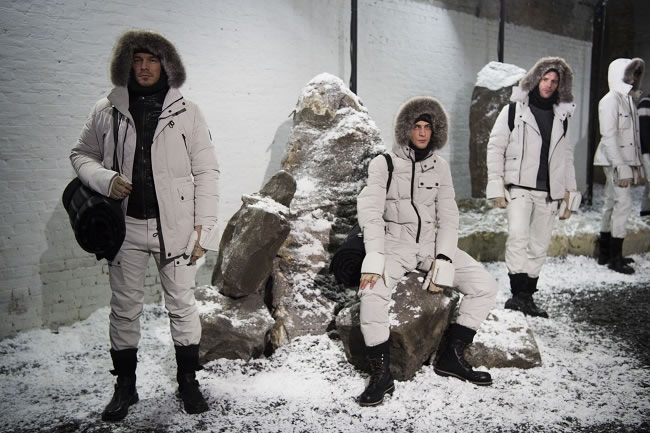 For those wanting a more serious take on sportswear, Astrid Andersen's collection ticked all the boxes. Moving away from the Japanese military inspiration of previous collections, Andersen moved straight into a more restrained arena creating pieces that work in and out of the boxing arena. The signature lace was much more subtle this time around and instead the focus was on the tactile quality and finish of the fabrics.

Hardy Amies chose to explore a skinny silhouette, but kept the overall feel very pared back and simple. Even the cargo pocket detail on the trouser leg was subtle enough not to disturb the line of the trouser. It felt as if Darren Barrowcliff, Head of Design, deliberately set out to create pieces which would fit seamlessly into a man's existing wardrobe by sticking to a neutral palette and uncomplicated lines. 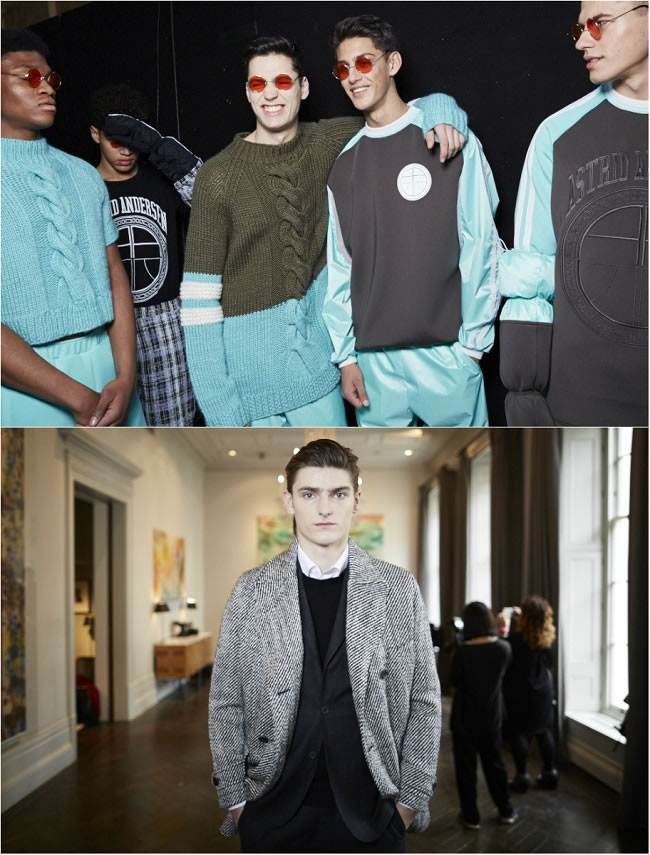 Step into the inky, industrial realm of Etautz with a 1980s influenced collection in shades of grey and navy, featuring light matching knits and collarless shirts in a subtle polka dot print. The colour palette and sharp pocket detail indicated an industrial theme through certain looks, which worked when paired with soft knits. The stand out items were the oversized trench coats and short bomber jackets with epaulette detail.

Ronnie Junior McDonald and Andreas Gran revived the slim cut suit that has been synonymous with Tiger of Sweden in past seasons and it felt as though the designers wanted to revisit the idea of tradition for AW16. However, this wouldn't be Tiger of Sweden without a particular twist. Military patches showed up on jackets, shearling trimmed a sleek double breasted jacket and painted floral details lifted a leather jacket to make it the stand out piece of collection. 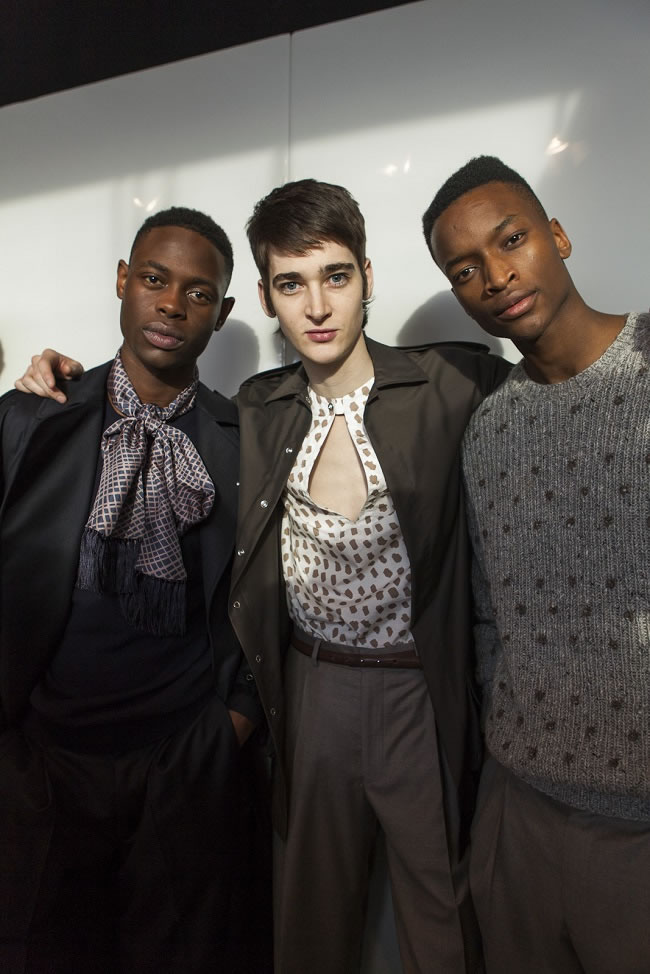 At first glance this collection from CSM alumni Paula Gerbase looks like the ultimate in simple and clean cuts, but look a little closer and you'll realise that the narrative is much more complex. The use of unexpected fabrics, such as nylon and neoprene, and textures made the viewer pay closer attention to the boxy designs and shorter lengths as nothing is quite as it seems. 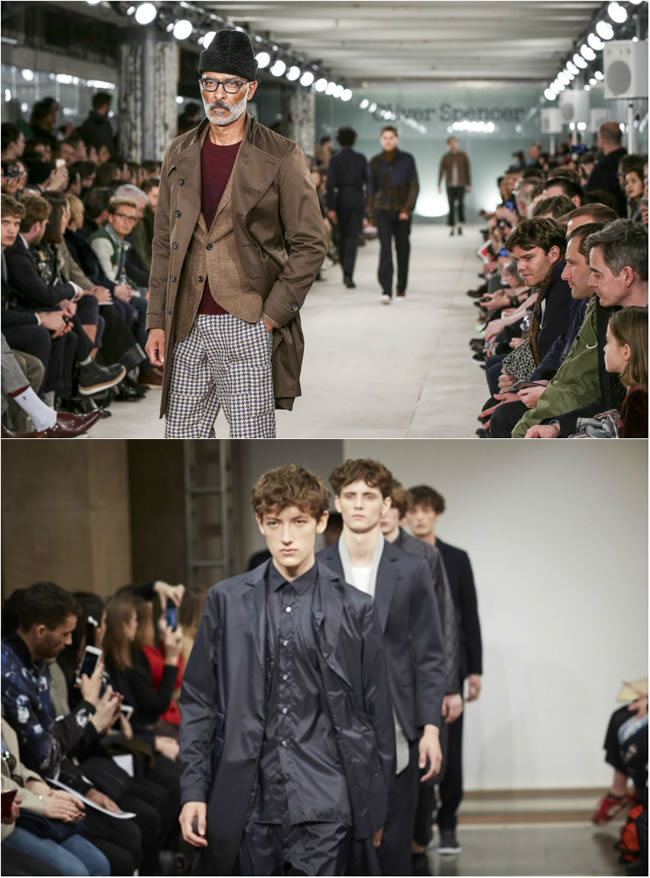 Winter was in full force on the runway for Sibling as their AW16 collection featured some heavy knitted pieces. Inspiration came from 70s and 80s icons; Grace Jones and Jean Michel Basquiat with models wearing bold tones of acid yellow, bright blue and blood red. Tipping their hats to Grace Jones and her legendary 'combative' style the collection featured boxing as a key theme. Models wore gigantic monogrammed boxing gloves with dropped shouldered jumpers and leopard print shorts. Taking a closer look backstage before the show, there are actually some surprisingly wearable pieces, like the denim jackets and handcrafted knitted pieces, which definitely all pack a punch!

This was certainly a high-energy packed show. KTZ sent their models down the runway in a mostly American sports themed threads with geometric printed hooded sweatshirts and baseball lacing details. The colour palette was kept to a minimum but still remained extremely bold in mainly black, red and white. Baseball jackets featured in a few of the looks, as did laced leather trousers and long leather coats. This is a collection for a fashion-forward and confident dresser. 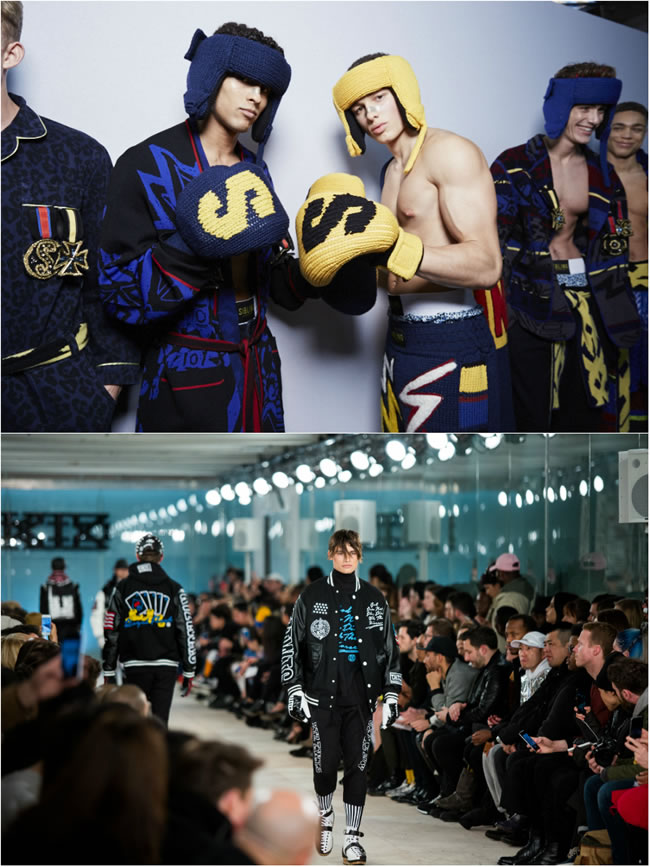 James Long's collection is inspired by his heroes who have helped him through his career. Unique woven coloured striped suits, with matching Louboutin boots, walked alongside shearling jackets, sequin turquoise sweaters and spray-painted denim. Hints of velvet and fur also featured which appeared to be regulars over the 4 days. Each piece has been designed to be worn in multiple ways making it a wearable collection that you can certainly have some fun with.

There was a major retro vibe to this presentation as Baartmans and Siegel took us back to the streets of Harlem in the 1970s. This was evident by the high-waisted pinstripe loose fitting trousers and roll neck jumpers layered under softly tailored coats. Fur lined bomber jackets, with a hint of leopard print, also featured and all were offered in neutral tones of camel and slate grey. Each model sported a pair of fresh high Converse to complete the urban 70s look. Certainly a wearable collection with a touch of Studio 54 glamour. 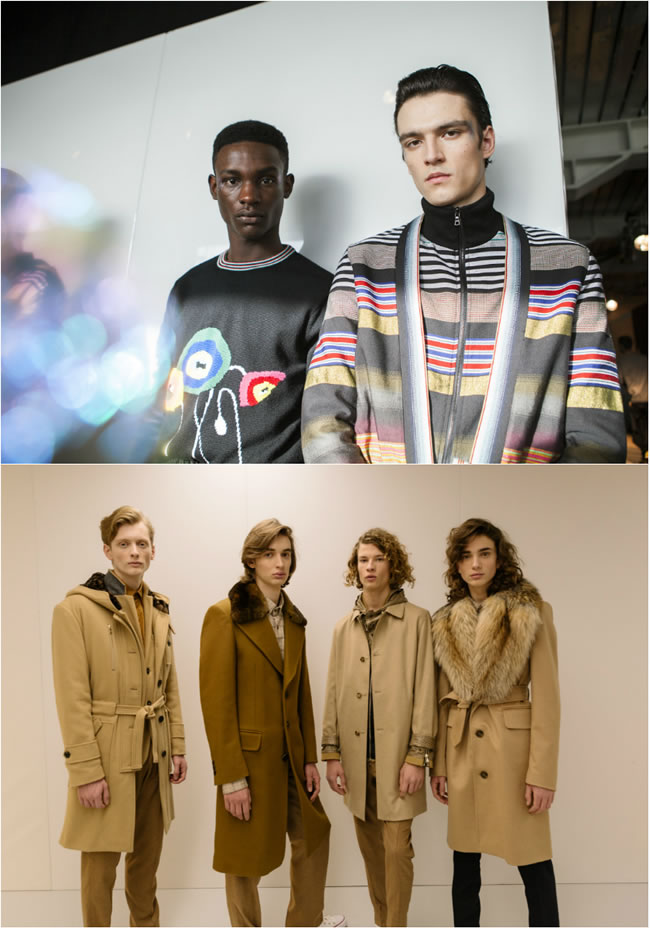 With live psychedelic folk music accompanying the fresh-faced, long-haired models as they entered the room, it was evident a 60s influence spread throughout this 'Parallelogram' entitled show. There were bucket hats worn with subtle floral wide-legged trousers along with knitted cardigans, woollen tassled-ponchos and leather clogs. All of which were offered in neutral tones of charcoal grey, khaki green and black. YMC have created a commercial collection full of wearable staples which can be easily layered up for Autumn/Winter 2016.

The Palm Court at the Waldorf Hotel housed the presentation for this quintessentially British brand where models stood on plinths wearing a modern take on the iconic raincoat. This luxurious outerwear has been inspired by the Second World War and featured full-length pieces including an oversized waterproof cape. Even though Mackintosh have gone with classic earthy tones for AW16, they have added a twist with their first creamy white hooded coat which certainly stood out amongst the crowd. They have also taken a step forward into read-to-wear with dark denim jeans and smart shirting. Simplistic in detail, but these coats are a worthy investment for next year and perfect for the London weather. 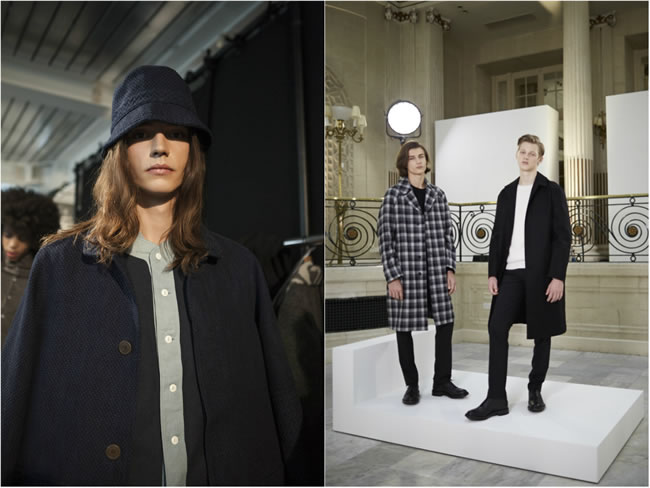 Also taking inspiration from World War II, this utilitarian themed collection was cleverly put together. Models were layered up in mostly black pieces, apart from the occasional pop of a bright mustard yellow. Taking the concept of the contradiction between 'covering and smothering' the collection comprised of wide legged culottes paired with simple black sweatshirts, a rubberised smock top and an oversized scarf. A cropped bomber jacket also featured along with a variety of robust looking coats to complete the idea of protection. A bold collection where each piece could definitely make a statement in your wardrobe. 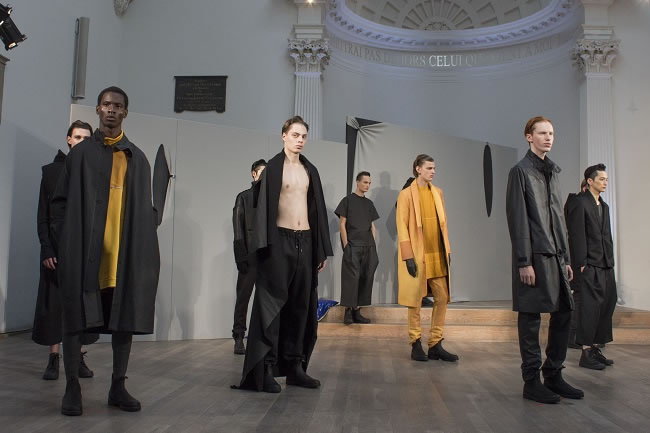