FLORAL PRINTS AND HOW TO WEAR THEM

THE FLOWER PATTERNS THAT HAVE TRULY BLOSSOMED 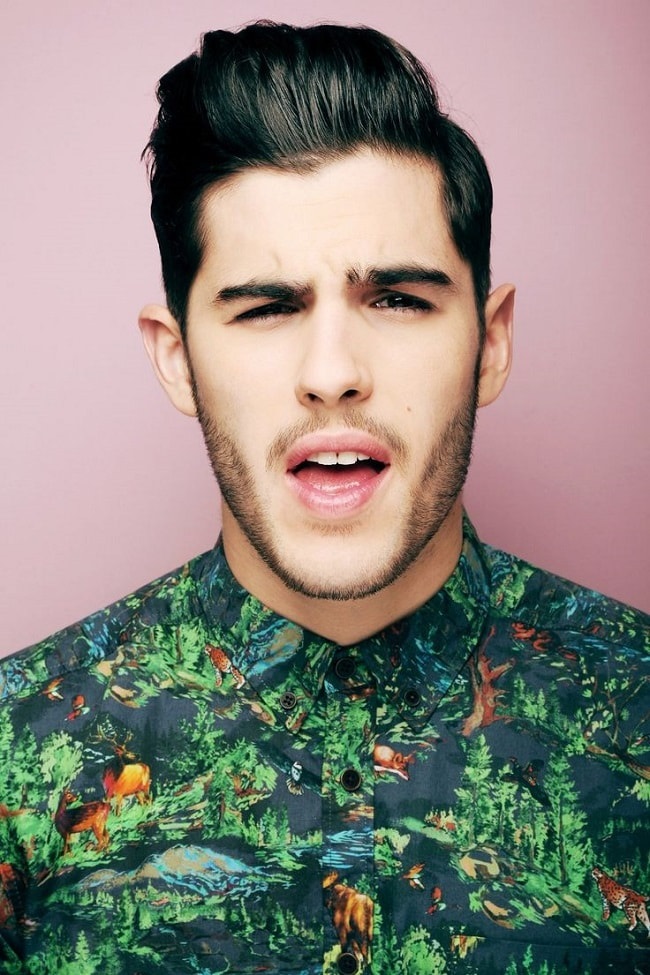 With Gucci introducing floral-printed suits, souvenir jackets incorporating a similar motif, and even streetwear brands trying out a small-scale pattern, florals have become the new plaid. There’s no one way to do it, and with its many iterations and mutations, its size and colour combinations influence how you’ll eventually wear it. Although, in more modern times, florals’ emergence coincided with menswear’s embrace of androgyny, its actual origins date back centuries. European explorers encountered chrysanthemum motifs in Japanese textiles and peonies and lotuses within Chinese fabrics, and brought them back West, where, early on, their exotic implications and high prices turned them into a status symbol. But, beyond the look, these patterns often had a greater meaning – the sun, Japan’s royal family, wealth, or, in the case of the lotus, purity.

More familiar to contemporary fashion, chintz fabric – now associated with Western wear and prairie-influenced styles – originated around this time in India. Its initial incarnations involved drawing a floral motif and painting around it in wax. Dipping it in natural dyes, including indigo, and then hand-painting it in yellow and green shades created a more intricate, detailed pattern. Although trade made these fabrics more common in Europe, textile designers eventually tried their hand at it. By the early 20th century, this led to the emergence of the Liberty print – a now mainstay amongst many menswear brands. Through a combination of these factors, florals have – excuse the pun – blossomed into a greater array of small, large, organic, and geometric versions. Below, we’ve gone through the basic types, and we explain how to wear them. 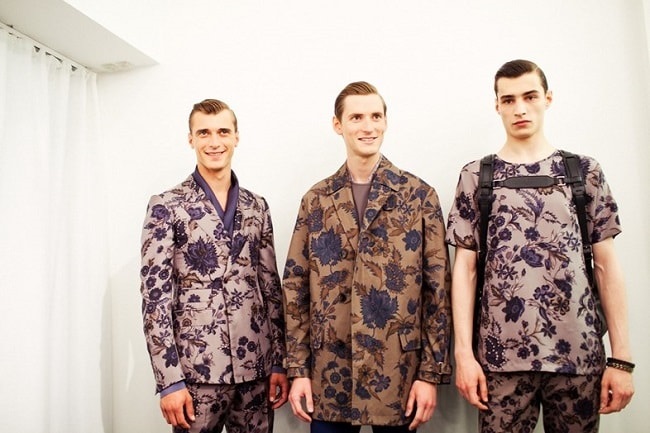 The most versatile option, smaller florals set your foundation, one that’s neither too bold nor too plain yet tosses in several bright pops of colour:

Calico – Considered a “country” print more common on Western shirts, this pattern uses a white or light background to contrast against several brightly coloured flowers or buds. Like chintz, calico can also trace its origins back to Indian textiles.

Liberty – Although not every Liberty print incorporates florals, plenty of them do or blend them with a similar plant motif. Detail and a highly stylised look differentiate Liberty prints from other small-scale florals, having more of a flowing, curved quality with hints of Art Nouveau added. Liberty prints, as a result, have a luxurious, saturated quality about them and are spotted, within menswear, on button-down shirts, blazers, and full-on suits.

Neats – Geometric motifs, even spacing, and a two-tone colour combination on a solid-white background mark this material as more of an economical choice. Because of its simplicity, both in execution and colours, neats is often a “starter” floral – not too busy or bold but a strong step away from solid shades and checks. 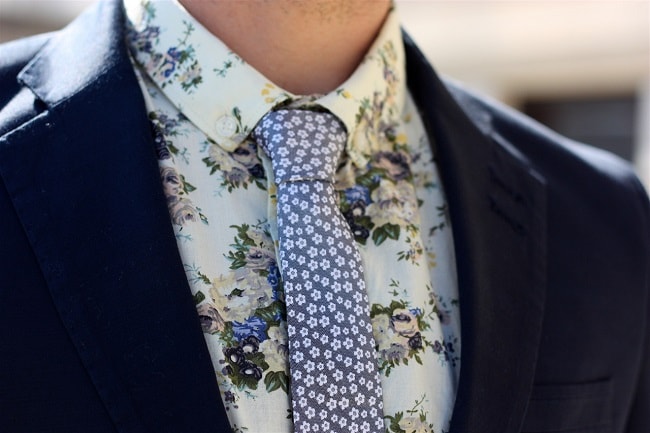 Although overlapping with smaller florals in size, an organic print has a clear progression – sometimes through a vine-like path that spreads out over the material or, in others, one theme changes form through a panelled concept:

Chintz – Contrary to its origins, chintz florals frequently emerge in Western and prairie-influenced styles, presenting a pattern that has an intertwining quality over fabric yet never seems overtly large. Essentially, its size and progression belie the detail put into this pattern, which is seemingly simple at a glance but more intricate once you thoroughly examine it.

Jacobean – This “sprawling” pattern adds florals as a recurring motif, but to break up the repetition, it frequently pairs it with foliage, birds, or even paisley for a leaf-like effect. For a more saturated floral print with more variation, jacobean styles tend to be utilised on button-down shirts and printed slim trousers.

Toile De Jouy – Sometimes dubbed an “old fashioned” print for its likeness to 19th century Dutch pottery. Fabrics with this pattern often seem like a paradox; a very detailed floral, scenic, or pastoral scene, repeating at points on the material, gets employed with a single colour on a white or light background. These days, menswear rarely turns to this print, although you’ll find it more frequently on button-downs and V-collared shirts from the 1970s, hence giving it more of a vintage character. 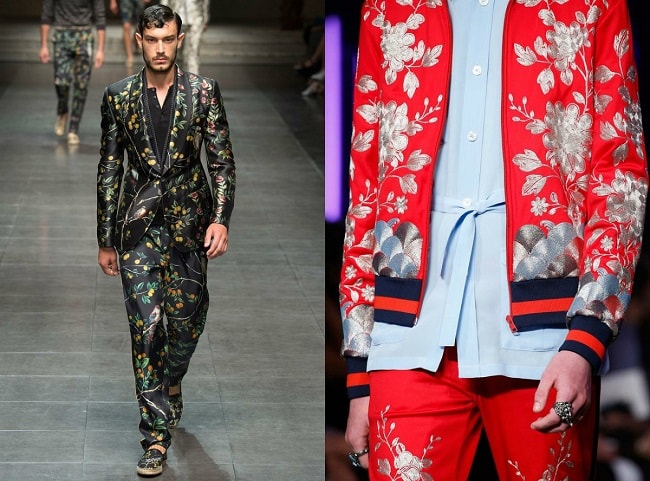 The main complaint about florals? The print looks like something you’d find on a couch. Dispelling these assumptions, geometric and abstract variations often embody many of the same qualities of small and organic prints but take a less literal approach:

Quatrefoil – Some might say it’s a stretch to call this print a floral. Yet, its backbone involves a symmetrical, four-petal motif that, while often linear, does resemble a flower in its basic form. In whichever way you wear this, understand that its execution is more avant-garde and approaching statement territory.

Arabesque – More detailed, this pattern based on Islamic art and architecture uses a curvilinear or intertwined formation. On occasion, its material exudes a retro character, hinting at something you might have seen over 40 years ago on a disco shirt. 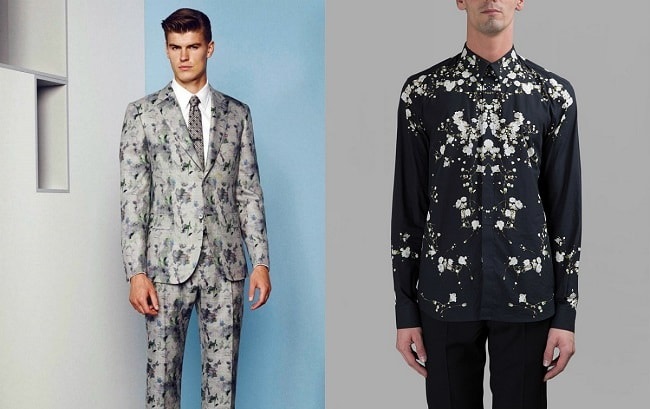 Although, if you think about it, most of the above prints can be magnified and printed on a larger scale, current menswear trends essentially stick with three versions – the classic shabby chic pattern, the tropical floral print, or the silhouette. All, for their size, detail, and colour saturation, are best used sparingly – a pattern on a button-down contrasting against a blazer, as a pop through a pocket square, or drawing attention to a slimmer-cut pair of trousers or shorts:

Shabby Chic – Many might dub this the “couch” pattern for its similarity to secondhand furniture. But, the scale – larger cabbage roses, detailed groupings of lilac blossoms, and colourful bouquets, sometimes intertwined with a ribbon or leaf motif – shows that you have no fear.

Tropical – As the most self-explanatory, these patterns often incorporate many of the elements above – organic progressions, geometric elements, neats’ simplicity, or the boldness of shabby chic – but focus on hibiscus blossoms and other tropical plants. Here, while florals may be used on their own, they’re often juxtaposed against leaves or island landscapes.

Silhouette Florals – If you took the colour out of a shabby chic pattern and contrasted the shadow against a white background, a silhouette pattern is what you’d get. On occasion, these veer into blotchy, Rorschach territory, but if you have to make a statement, it’s always better, as they say, to go big than to go home. 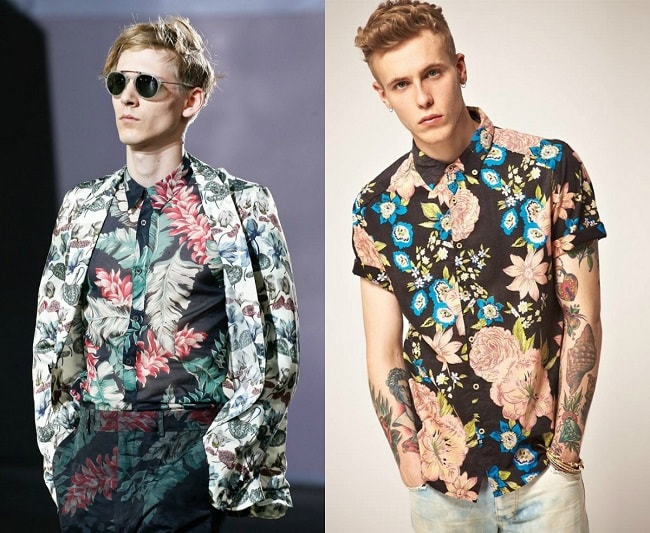