WHY THE SOUVENIR JACKET IS 2017’S DEFINITIVE PIECE 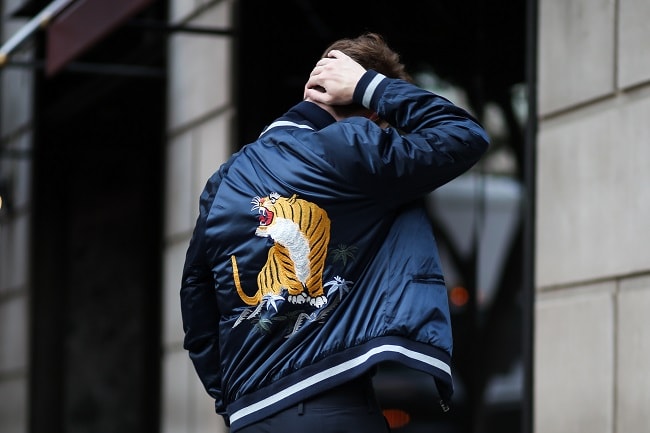 Just how ubiquitous is the souvenir jacket? Anywhere you could possibly go – into the city, on a subway or bus, a suburban shopping centre, or any online community geared toward menswear or streetwear – at least someone is wearing one. Its appeal stems from a blend of vintage styling, subtle military hints, and the varsity jacket’s seeming athletic prowess. It has the bespoke allure of customisation – even if you’re buying it from a prominent highstreet retailer. Part of that notion involves the supposed story behind the jacket, from someone’s actual experience or the East-meets-West symbolism of eagles, cherry blossoms, and dragons covering the back and front.

Properly known as a “Sukajan,” this silky, embroidered garment usually with a panelled design originated as a memento piece requested by American soldiers stationed in Japan during World War II. Although the name has a couple of different interpretations – “Sky Dragon Jumper” in Japanese, or an amalgamation of military base Yokosuka and the Japanese word for “Jumper” – the piece reflected soldiers’ time spent overseas with several custom designs; the usual dragons and cherry blossoms, geishas, and even maps, all of which may have played off western imagery. Construction ranged from rayon and silk to leftover parachute fabric. 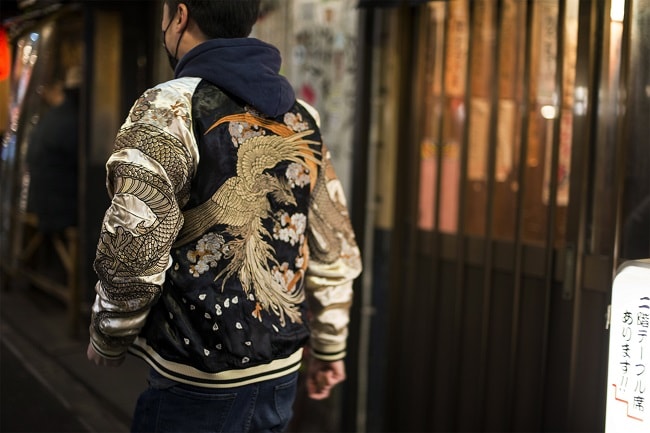 The jacket spread with subsequent conflicts in East and Southeast Asia. Yet, designs created during the Korean and Vietnam wars reflected a darker character that’s rarely seen today. However, in Japan, the jacket didn’t disappear when U.S. soldiers departed. Rather, as the country became fascinated with Americana and minimalism in the 1960s, youth and gang members looking for a symbol of rebellion repurposed them. Reflecting this, characters in Yakuza films frequently sport its two-tone look. Later, youth in the United States and Europe picked it up, wearing the piece for similar reasons. James Dean’s red jacket in Rebel Without a Cause touches the surface, while Ryan Gosling’s quilted style in Drive and the number seen on The Get-Down’s Shaolin Fantastic make a more literal reference. However, like many flashy garments, the souvenir jacket could’ve come and gone, seeing its peak in 2016 and fading out a year later. Yet, based on fashion collections and streetwear looks, its presence is as strong as ever for the following reasons. 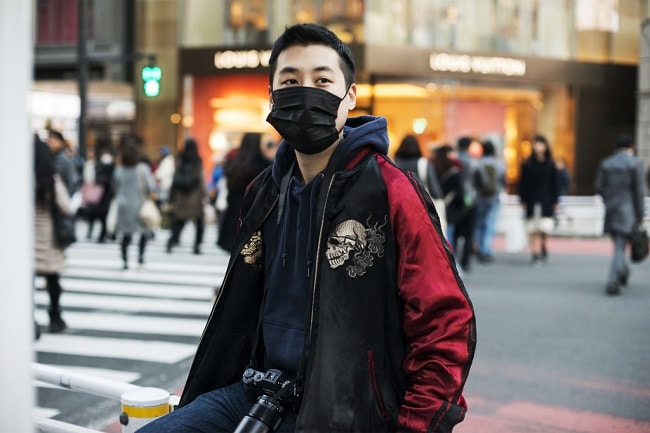 A Confluence of Style

Of all the ways a souvenir jacket could be described, “confluence” seems the most apt. Firstly, as described above, its design reflects multiple intersections between Western and Eastern culture, whether that’s soldiers returning from war, the East re-appropriating American fashion, or rebellious Western youth going against the grain. Then, in present times, it’s a piece common to both menswear and streetwear brands that’s worn in much the same way; a bold, embellished style for getting attention. No one puts a souvenir jacket on and expects to stay in the background. Thirdly, it serves as a culmination of all bomber trends seen since 2013; the two-tone baseball jacket, metallic and shiny finishes, all-over prints, and colour-blocking. Almost all jackets borrow from all four. 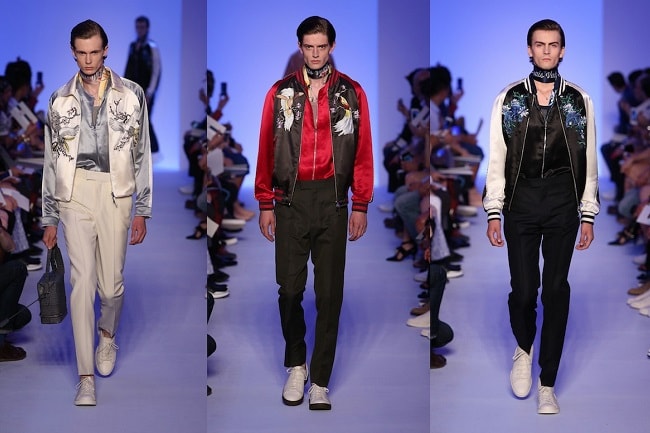 Based upon what many would consider the “first wave” of the trend’s lifespan, designers from Supreme to Gucci took the jacket at face value. At the same time, celebrities from Kanye West to Harry Styles in One Direction’s 'Drag Me Down' video donned the colour-blocked, embroidered silk combinations. But, when a trend can only be done in one form, its prominence starts to fade, getting passed over for something similar in character but visually different. Rather than succumb to this supposedly inevitable pathway, the souvenir jacket has proven its versatility by entering a second evolutionary stage. That, so far, has emerged in designers taking the shimmering silk bomber template and infusing it with various graphics, prints, and more signature details. For instance, 3.1 Phillip Lim added a cheetah print and gave it a reversible style, A Bathing Ape splashed its recurring shark motif over the front, and Louis Vuitton used an all-over floral print. 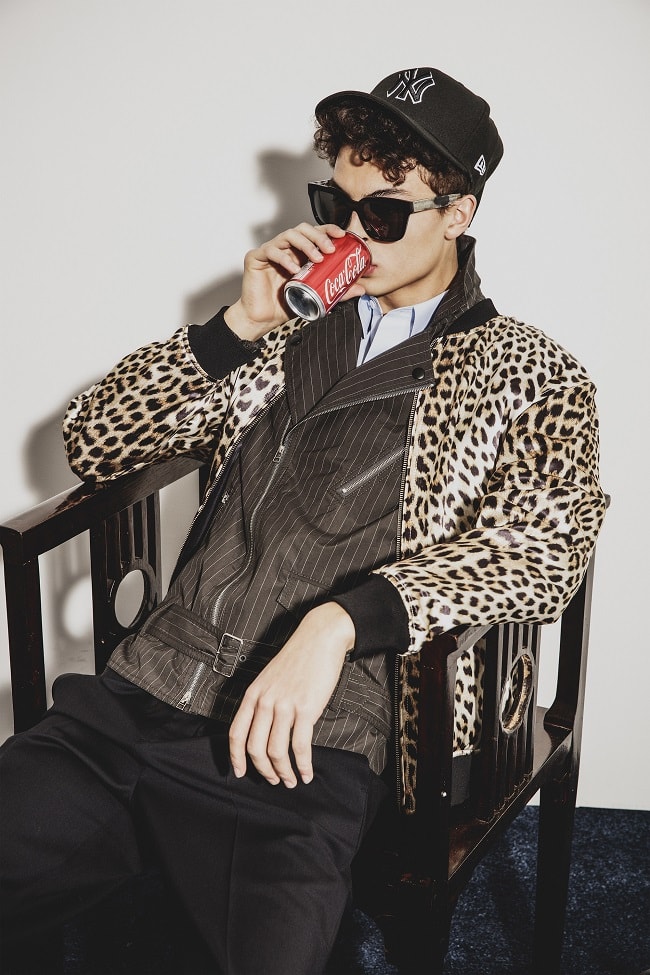 Another trend having its extended moment, military-influenced style manifests as olive drab jackets and shirts, tan desert boots, epaulets dressing up button-downs, and patch bombers making you look like you walked off the set of Top Gun. Within this list, the souvenir jacket has a place, although it comes with less-obvious allusions. As retailers continue to stock up on these pieces and consumers continue to buy them, military fashion could end up going the way of camouflage prints – on trend in the late 90s, never quite dropping off, and experiencing the occasional high after a streetwear collaboration. 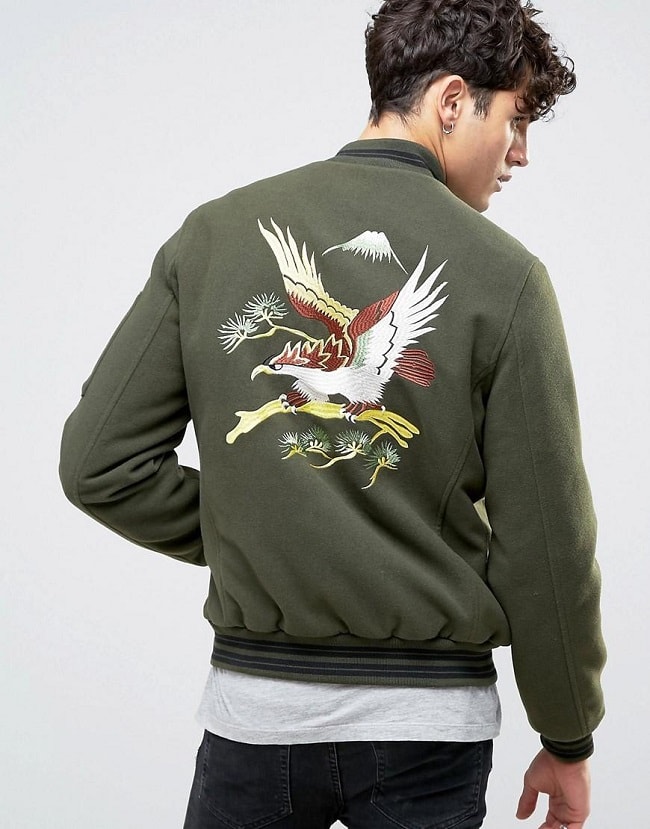 Silk and embroidery up the souvenir jacket’s luxury factor. Yet, its core baseball silhouette cuts away any associated pretensions. What results is a piece that, for warmer conditions, lets you be seen and gives you an opulent piece of outerwear to style over a button-down shirt and chinos. But, when the temperatures start to drop, it returns in rotation as a statement layer – something that can line and simultaneously add a contrast underneath a leather or suede jacket, a solid-black trench, a camel coat, or even a work jacket. 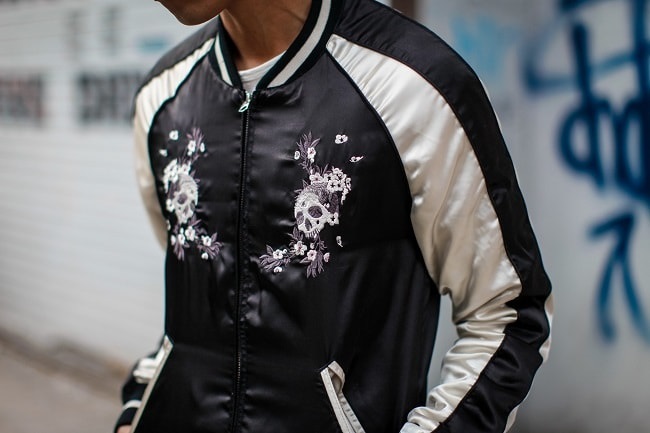