ALL THE RIGHT WAYS TO WEAR SHEARLING

A LOOK NOT REVISITED FOR DECADES THAT NOW SEEMS FRESH 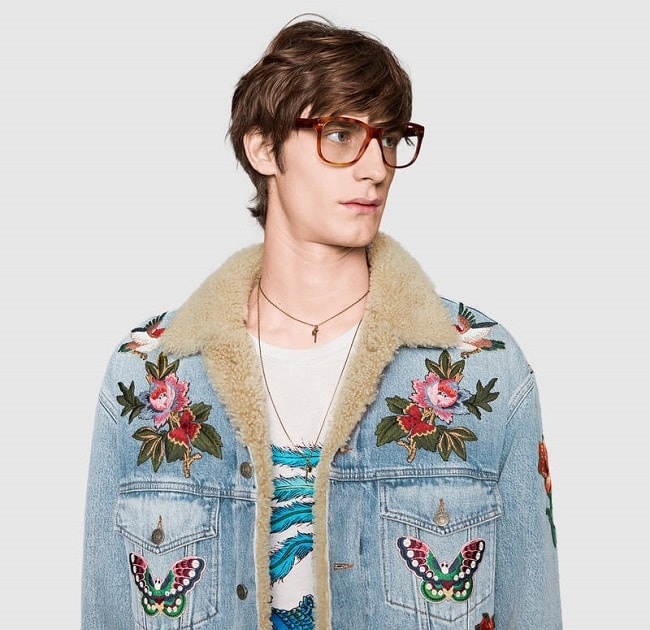 It’s everywhere – in and outside of jackets, lining slippers, hats, and boots, inside your hoodie, and even within your athleticwear. So, with its ubiquity, can shearling truly be considered a trend, instead of the menswear mainstay it’s become? Introduced for the AW15 season, shearling never entirely left. Its inclusion within bombers and suede jackets seemed both retro and innovative at the time – a look not revisited for decades that now seems fresh. Yet, after a strong run, it simply seemed there: Everyone now has a shearling-lined jacket, so why not add it to everything else?

And, while the material in synthetic form now surfaces in some of the less-likely garments, designers started reworking their approach for the AW17 season. Yes, shearling’s still here, but it’s used as paneling, on the exterior of a jacket, for texture, and even dyed a brighter, bolder shade. Assessing all of this, what’s the right way to wear shearling? 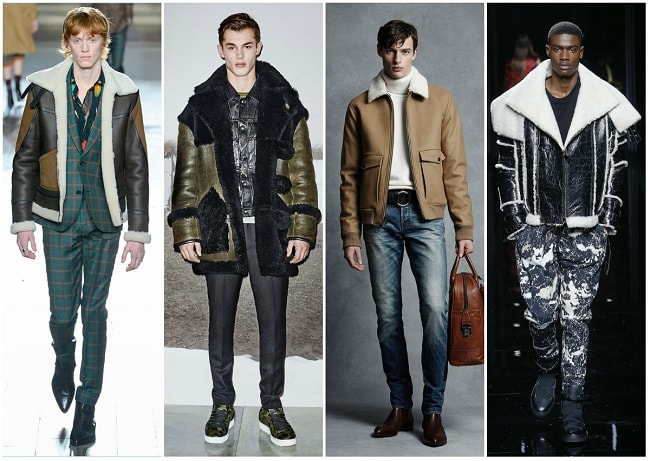 Shearling, in its most natural form, implies masculine ruggedness, with the wool still attached to the sheepskin. While, outside of higher-dollar pieces, most of what you find is synthetic, its foundation literally suited a range of ‘70s icons, from actors like Robert Redford, Alain Delon, and Steve McQueen to musicians like Jim Morrison. So, in a sense, AW17’s subtle revisiting of the ‘70s opens the doorway for double-breasted suede jackets with a wide, exposed collar. This simple baseline, though, requires a bit of planning. In true form, keep the suede a tan or light brown hue and shearling white or off-white, and go with a longer, boxier silhouette, rather than something falling to the hips. But, realise that, in wearing shearling this way, it’s also easy to unintentionally look like a cowboy. To balance all that ruggedness with refinement, avoid matching the jacket to your trousers or boots, and keep the material exclusive to this piece. 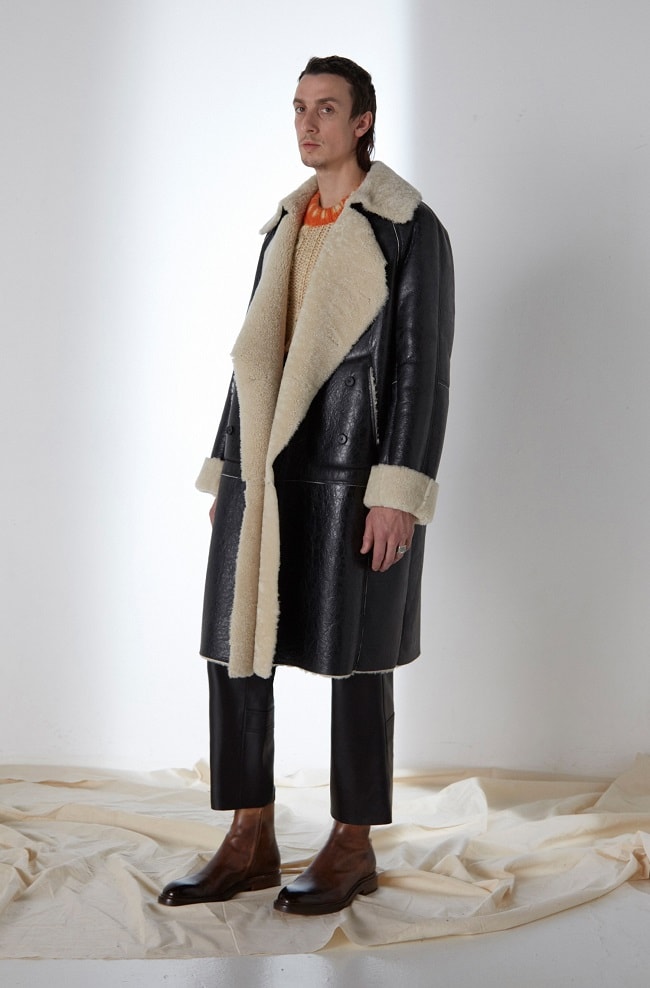 What brought back shearling in the first place? The pilot jacket, itself an oversized leather bomber with a contrasting shearling collar that indirectly nodded to seminal ‘80s flick Top Gun. At the time, it built upon the basic bomber with a single accent that made this staple just a hint more badass. And, while most might have considered this style a relic of its time, it hasn’t faded. Instead, as colder temperatures set in, the pilot jacket utilises shearling to give it more substance. Specifically, while a shearling-lined collar offers more of a fashionably retro angle, full-on lining keeps your body warm even into winter. But, don’t forget about contrasts and the military angle, so consider dark brown, black, or even olive green for the leather exterior. 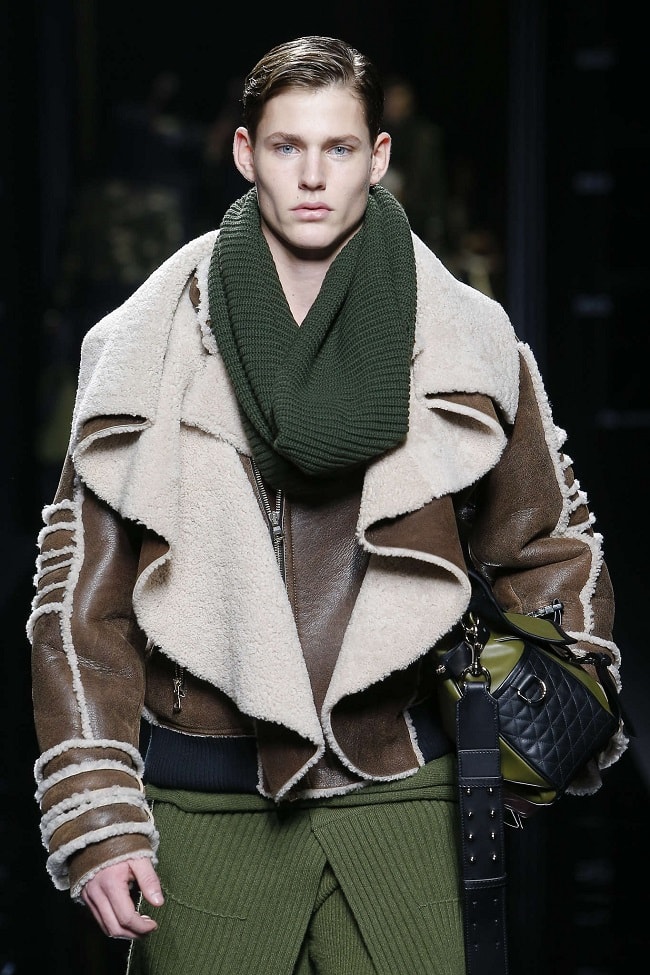 For Luxury and Texture

At this point, the hip-hop artist in a fur coat, flaunting his luxury, has become a cliché, and perhaps as one way to stay ahead of the curve, Drake, Kanye West, and others in that echelon have swiped out the pelts for the ultra-cosy, and just as expensive, look of shearling. Yet, as a fashion piece, fur coats and shearling seem to coexist in the same sphere, both orbiting around the concept of texture. Why be flat and ordinary when a particular surface shows you’ve got cash – and tons of it? So, in this vein, designers co-opted this idea for AW17, seeing shearing not just through a ‘70s or aviator lens but rather treating it as a tactile accent. The result comes through fully shearling monochrome jackets, reversible styles, piping, and even exterior paneling playing off solid leather or suede. 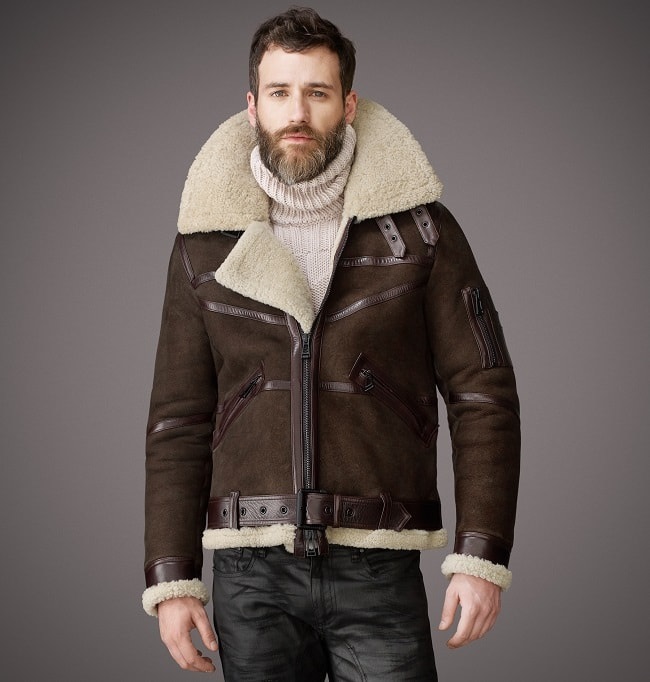 Within everyday apparel, it’s not uncommon to find an active hoodie or pullover lined with fleece. The inclusion, usually bonded to a polyester/cotton blend exterior, functions as a low-level layer, giving the wearer warmth whenever he’s going out for a run. Yet, as luxury sportswear – or simply “sports luxe” – has emerged as an off-shoot of athleisure, swiping out fleece for shearling isn’t a far stretch. After all, as mentioned above, it’s a natural body heat retainer and, unlike your run-of-the-mill fleece, looks pretty sharp however you wear it.

Lined and Folded Down

While you might not want to match your jacket to your boots, the former’s design – contrasting and folded over – has been passed onto your footwear. Specifically, shearlings added as one everyday insulation option, and if the shaft’s particularly tall, you can double it down to create a similar effect with the darker patina leather. Although you might not want to go hiking with the lining partially exposed, this city-ready style practically anticipates your skinny jeans. 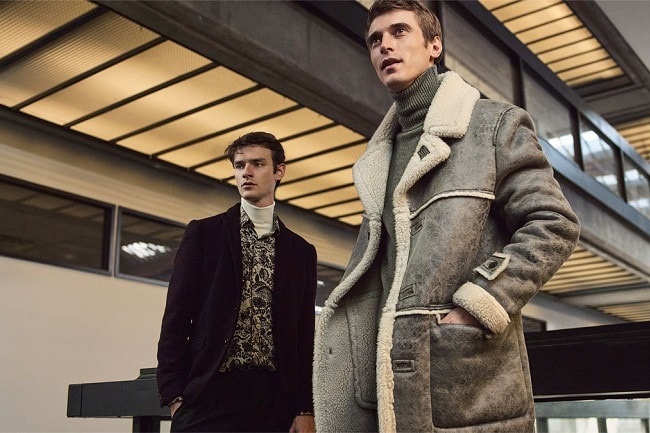