HOW TO WEAR A BRIGHT-COLOURED SUIT 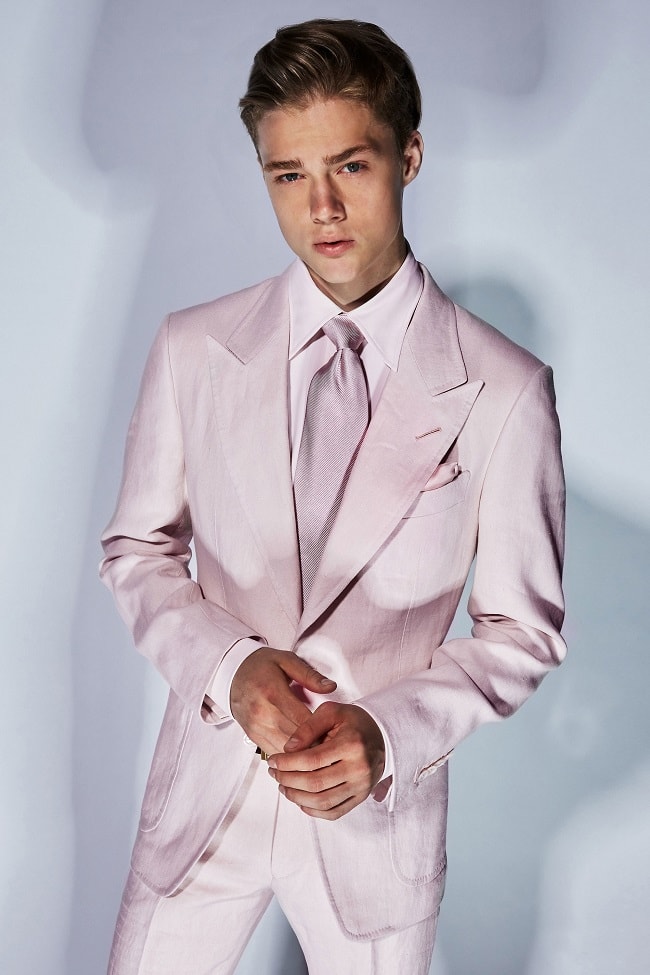 Suits are the donuts of the menswear world. At one point, decades back, you might’ve had a cake or powdered-sugar variety, with jelly or Boston Crème an adventurous choice. But now, the latter two seem fairly commonplace, replaced with some salted caramel or maple-bacon variety. With suits, the same time period has circled through the standards – navy, pinstriped, and brown for a bit, with black always ready for the most formal of occasions. Yet, Fashion Week presentations indicate that we’re all ready for a bit more figurative flavors: Pink, green, yellow, dark purple, and plenty of pastel and bright shades. As such, any fashion-forward man has at least one brightly coloured suit in his wardrobe – or has been eyeing one. Yet, the shade, at a glance, comes off as both awkward and intimidating: What, exactly, do you do with it, when do I wear it, and what do I pair it with? Whether you’ve picked an unstructured variety or went double-breasted, we break down the basics:

Know When to Wear Them

Navy, pinstripes, and even black all meet certain dress code expectations for the workplace, funerals, and other formal occasions. A bright pop of colour shouldn’t replace these staples; instead, it supplements them, so you don’t look like the stodgy killjoy at the party. Rather, for this factor, brightly coloured suits have garnered the nickname 'party suits' because that’s exactly where you’ll wear them. They’re a tasteful way to stand out at a wedding – consider the cavalcade of patterned wedding suits ASOS’ own line has introduced over the past year as an example – and fit the dress code for plenty of high-end clubs. At the same time, when you want to steer clear of expensive bottle service, an unstructured variation gives you that in-the-know updated New Wave look: You’re so retro, you’re ahead of everyone else. 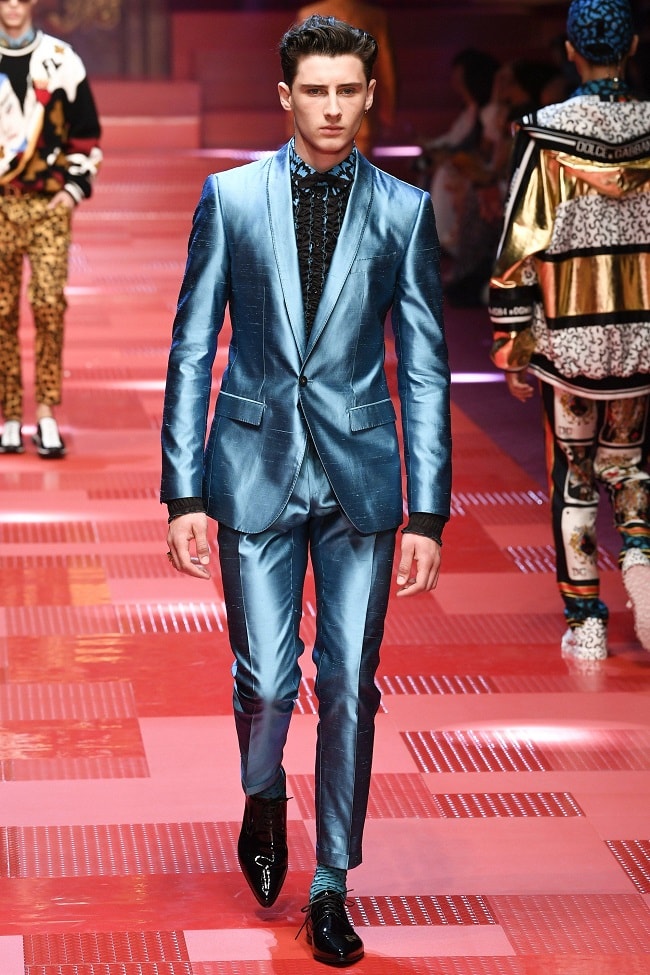 Yet, treat brightly coloured suits like any piece of clothing you could buy: Some shades look good on you, while others you should avoid altogether. For instance, the more adventurous of us might want to try out this season’s neon green or highlighter yellow ensemble, but both shades jarringly clash with warmer, red-hued skin tones. As a guide, think about what works already. If it’s navy or another shade of blue, push the envelope just a bit into royal purple territory. As well, if you can rock light grey, why not see your ensemble through rose-coloured glasses, and try out a soft, dusty pink or another light pastel? And, if you’re all about neutrals, break away from the standards with a darker green shade. Patterns complicate things, but they’re another step down a similar, well-worn path. 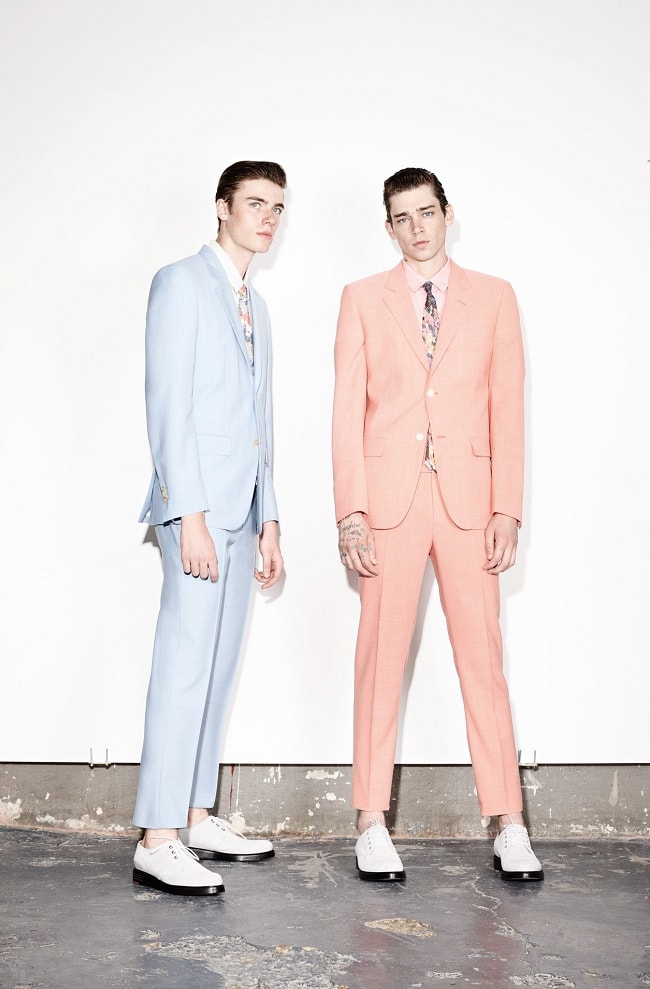 Back to the formal versus less-formal dichotomy. These instances shape which accessories and shirts to pair with your suit. As a given, all should be either darker or neutral shades; otherwise, unless you’re intentionally attempting to clash, it all comes off as a try-hard, eye-sore endeavour. So, on the informal end, the possibilities tend to be more plentiful. Now’s the time to try out trainers with suits – the simpler, the better. Or, think about a cropped or rolled ankle – no patterned socks, in this case. With your shirt, button-downs always tend to project a stiffer impression, and if you’re intentionally dressing down, think about a roll-neck or even a fitted T-shirt. Chambray’s also an option, and if you’re looking to give this casual staple more use, a solid version’s woven texture turns into a less-predictable pairing. For formal occasions, you might want to keep that pointed-collar button-down on hand – solid or with a light, small print that’s less distracting for a bit of variety. As well, while you’ll want your trouser legs all the way down to your ankle, complement your suit with a modest accessory – a pocket square or lapel pin for a touch of character. Overall, weddings and other formal occasions typically call for a structured suit, so avoid the sloped shoulders and wider cuts. 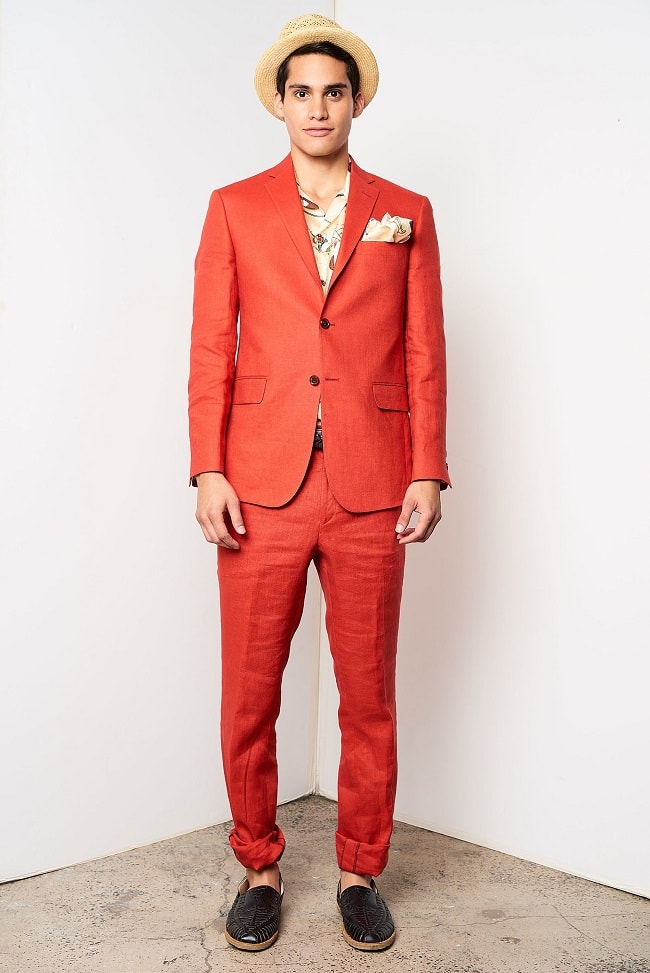 Challenge Yourself with Patterns

Style experimentation always occurs in levels. Whereas once you might have progressed from pinstripes to a light check print, that less-typical shade represents the next destination. Beyond that, you’ve got what’s best described as the Wild West of men’s suits: Patterns. Runway presentations show there’s next to no limit: Checkerboard prints, florals, paisley, and various forms of embroidery, to name a few. The rules, here, remain the same: Find not just a colour that suits you, but a pattern that expresses your personality. It’s all out there, and turns into what’s now, at least, the biggest style statement you can make. 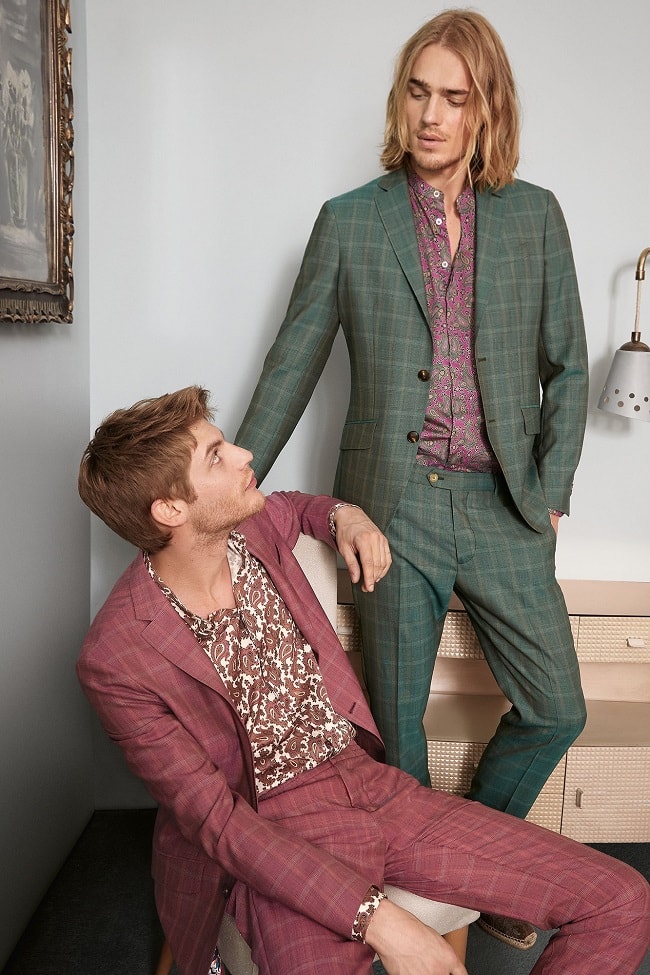