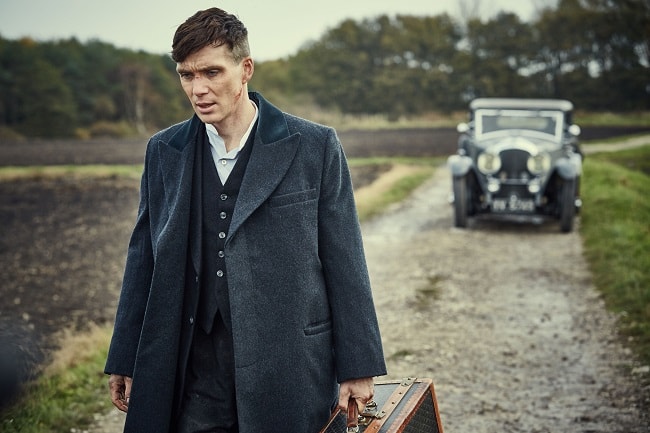 They’re on their fifth series, they’ve won a BAFTA – and the Peaky Blinders crew are winning in the fashion stakes too. Jake Allen, Founder and Owner of bespoke tailoring outfitters, King & Allen, says that he sees the look becoming increasingly popular as the summer season approaches. “People are picking up the style both sub-consciously and consciously” he says. “More often than not, we’ll be in the initial consultation and the customer will identify straight away when I say ‘Peaky Blinders’ to them” adds Joe Goad, Tailoring Consultant for King and Allen. “But increasingly, I’m also getting clients coming in saying ‘I want to look like Tommy Shelby’ or similar.” So, what makes the definitive Peaky Blinders look? Here are some key tips on the general style features to look for, how to adapt them to the summer season, and which style details you should seek out to emulate four of the hit show’s most iconic characters.

If you’re looking to customise a suit you already own, focus on the details. Mixing in a flat cap (for full authenticity, a Newsboy Cap is the model to go for), contrasting penny collar, fob chain pocket watch and slim tie with a tie clip are all trademarks that will transform an everyday suit into a Peaky Blinders classic. Bring them all together for a strong reference or throw individual touches in to keep the nod lighter. 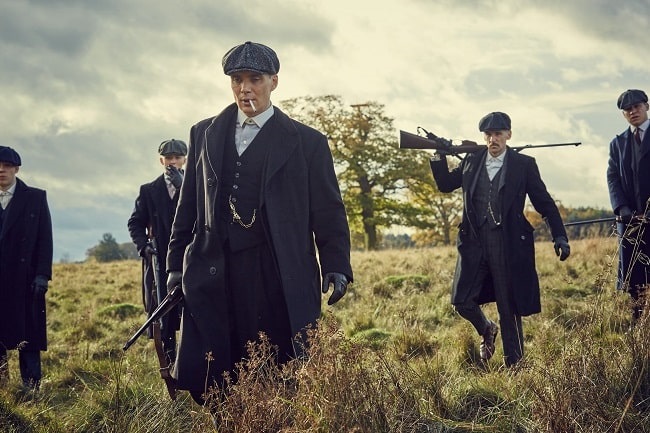 Tweed is instantly identifiable as the fabric of choice. But for the lighter summer season, mixing things up with a lightweight tweed like a Holland and Sherry wool, or even opting for a flannel will still achieve the style and sturdy tailoring - but without looking or feeling too oppressive during the warm months.

For authenticity, an oversized overcoat is a must – but it’s the contrasting collar that really makes the style work. Traditionally, that collar will be a velvet or a corduroy, but you can afford to play around with fabrics and tailoring for a lighter summer finish, whilst still keeping the reference.

Steer away from today’s low opening waistcoats and go for a higher flyer to ensure that all-important penny collar sits well. It’s a style you don’t often see nowadays but it’s a little detail that makes all the difference. For a cooler summer look, another option is to keep the tweed and the turnups, but veer towards a slimmer, more modern cut to the trouser and a slimmer lapel to the suit – it will still create an instantly recognisable look but give you a modern twist as well. 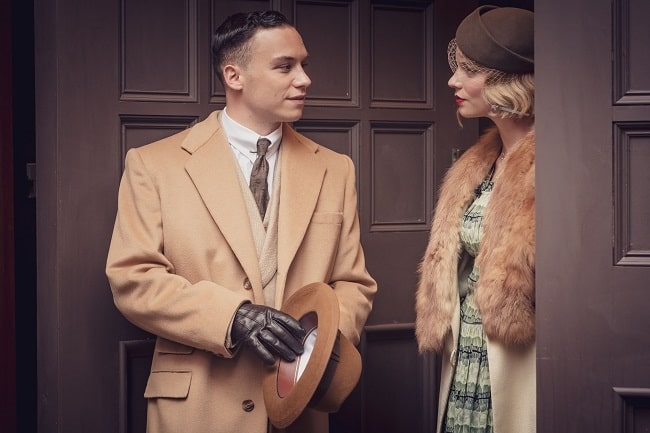 Here’s where you have the chance to create your own Peaky Blinder interpretation by adding a statement shade. A contrasting waistcoat, overcoat or tie will give a nod to the original Peaky Blinders ensemble, whilst making the outfit yours for the occasion.

Usually, the rule is ‘shoes with suit’ – but for this look it’s got to be Derby boots. If you’re going full Peaky Blinder with your footwear, choose a wider leg on your trouser to accommodate the higher ankle and ensure the outfit flows (and wears) well.

For Season 5 we have inside knowledge that Cheaney & Sons provided some of their shoes to the BBC Costume Department. One particular standout style is their two tone Spectator Shoes. This type of shoe was actually too striking for the taste of British gentlemen; it was in the United States during the 1920s and 1930s that they achieved their greatest popularity, becoming one of the great icons of the style so unmistakable of these decades. The presence in the music scene was very prominent, influencing an entire generation of jazz and swing artists during the golden age of these genres. So, we can probably expect these to be worn by Michael Gray who returns from America after the New York Stock Exchange collapse. 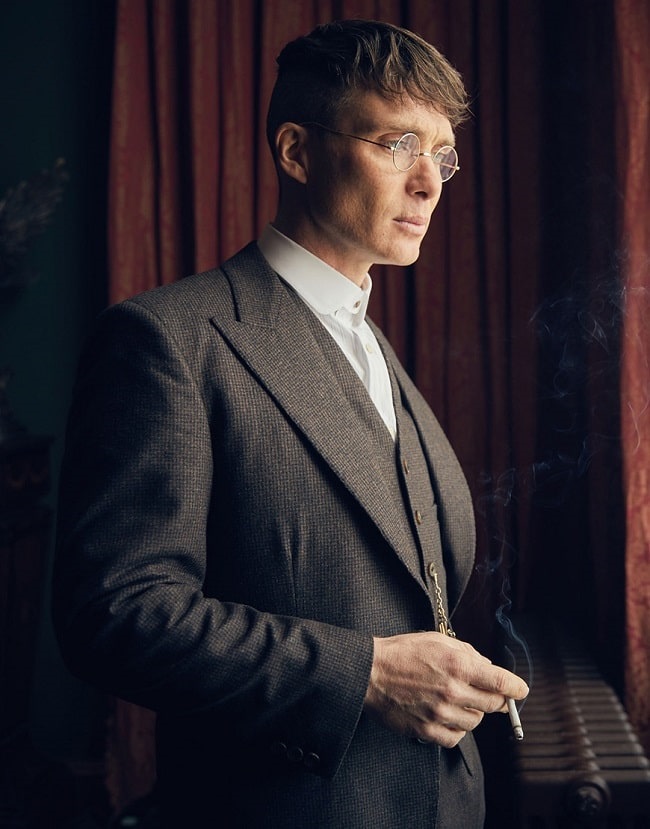 The mastermind of the Peaky Blinders empire, Tommy is a man whose taste for fine attire grows with his success, yet he never strays too far from his roots. Tommy is most often seen in a grey tweed suit with standard notch lapels. Like all Peaky Blinders, he sports a 6-button waistcoat - sometimes with four pockets rather than two - and goes for a herringbone cloth. Unlike his straighter edged relative, Michael, Tommy is more often seen without a tie. He does however wear one in the later series as they become more successful and he attends more prestigious events – giving you a casual and smart option for the look. When it comes to hairstyle he sports the epitome of the Peaky Blinders haircut with shaved sides and slightly more length on top. 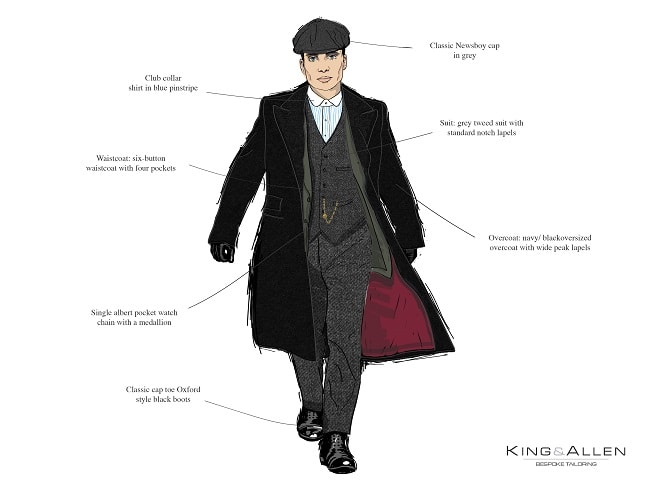 Tommy’s brother and right-hand man – Arthur is the unpredictable brute. This is reflected in his rough and ready country-like style. Arthur is most often seen in a more countryfied tweed suit with standard notch lapels. As with all his band of brothers he sports a waistcoat, sometimes with four pockets rather than two, usually with 5 buttons. Arthur’s most distinguishable accessory is his bowtie – a chance to add a little bit of colour and your own character. For the most authentic look, go for a spotted fabric and choose the statement shade that best suits your summer mood. For Arthur’s distinguishable haircut, go for shaved sides but leave length at the top and slick back with Pomade or wax. 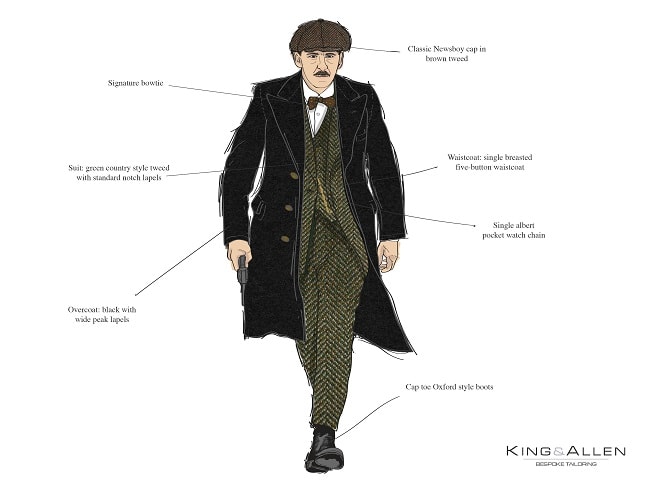 The ultimate ironic character, Michael is the archetypal good guy trying to do bad. Airing more formality and legality than his band of brothers, he faces a constant struggle to become a ‘true’ Peaky Blinder. He’s most often seen wearing a navy pinstripe suit with wide peak lapels – giving an alternative, more Italian take on the Peaky Blinders ensemble. Michael almost always sports his smart burgundy tie – giving him the legal gravitas the family wants him to portray. He also bucks the headgear trend, hardly ever wearing the traditional Peaky Blinders newsboy cap. Michael is also one of the only Peaky Blinders who chooses not to opt for the traditional haircut with shaved sides. He dons a more regular cut with normal length on the sides. To really emulate his style, think about growing that moustache out too. 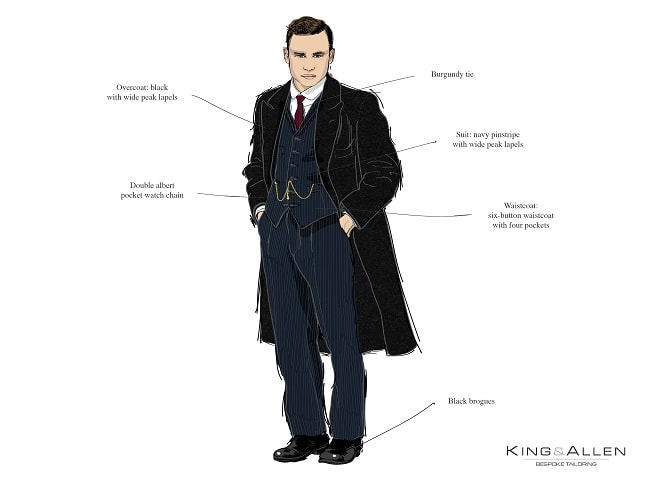 Sharing more similarities to Arthur than his other brother Tommy in terms of style and temperament, John is one of the gangs most feared henchman. John offers plenty of style options to lift from. switching between a country tweed suit, similar to that of Arthur, and a smarter navy suit – similar to that of Tommy. However, John’s suit has a wider notch lapel – giving him a rougher look, and he reflects that notch in his overcoat too. In regards to accessories, go for the iconic Peaky Blinders cap, but sport it at an angle for a jauntier finish. A pinkie ring is a key style detail that will complete the look. He has the archetypal Peaky Blinders haircut – shaved dead short at the sides and longer on the top. 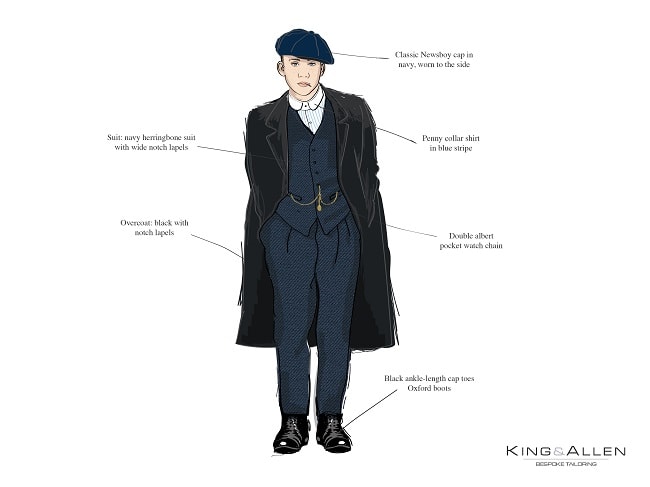 Who is the most stylish Peaky Blinder? #style